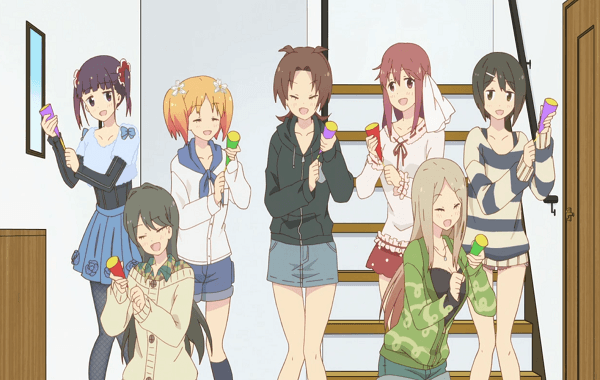 Well here it is, the final episode for the first yuri anime of the year, this really has been an interesting show for me. When the anime first started I was interested and above all entertained; the first two episodes had some of the funniest moments in the entire series (yes it was the veranda jump and volleyball scenes) but the other episodes developed more dramatic issues which kept me interested. Although this one does have some elements of humour, I preferred the more serious notes and since the past few episodes were building up to Mitsukis’ confession, there was a bit of tension that was nicely resolved in the end.

12-A: Pudding and Mitsuki’s Determination.

The surprise party may have been ruined for Mitsuki, but that doesn’t mean Rina had to miss out on all the fun. Whilst walking back from school Rina begins asking Mitsuki why Sumi was texting from her house, when the doors opened both girls are welcomed with party poppers and all seven girls (Sumi included) shouting congratulations.

The first event for the day was the talked about bucket of green tea pudding… no really they actually filled a large bucket full of the stuff and added azuki beans into the mixture. Mitsuki takes the first spoonful and expresses her love for the pudding; Rina was a bit less enthusiastic, but tries to express her appreciation for their effort. The gifts given to both seniors included two handmade mustaches (courtesy of Sumi), a chandelier paid for by Kotone and Iizuka and Ikenos’ spot on impersonations of the two girls. 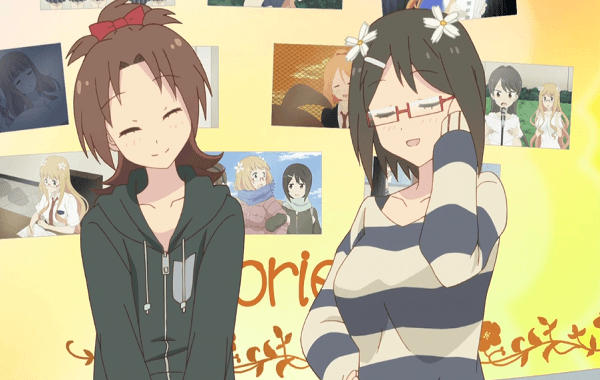 Unfortunately there was that pressing matter involving Haruka, Yuu and Mitsuki that needed to be addressed, luckily all three girls have a private conversation in the kitchen, although I wouldn’t be surprised if the others could hear them. Mitsuki and Yuu begin to have a sibling argument with Haruka smack bang in the middle; since she doesn’t believe Yuu is really in love with Haruka, Mitsuki confesses in front the two and even asks Haruka out on a date.

The brief argument between Yuu and Mitsuki was very enjoyable to watch; it felt like an accurate portrayal of the little things siblings tend to get angry about and it flowed nicely into the next scene where Yuu kisses Haruka to further disobey her older sister. Although I’m not a fan of Mitsukis’ obsession with Haruka, the second half does explain the real reason for the attraction and ends with both parties happy about the situation. 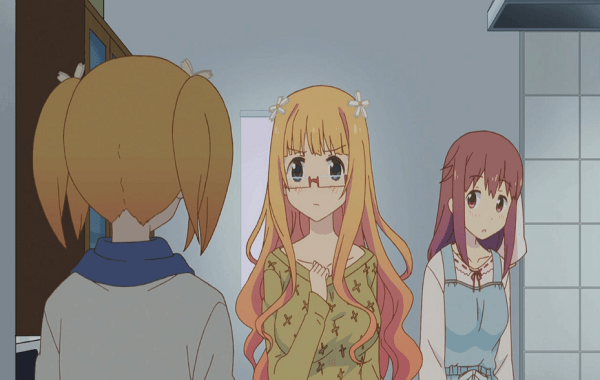 After the graduation ceremony for the senior students finishes, Haruka and Mitsuki meet each other behind the tennis courts (it’s not what you’re thinking) so that Mitsuki can talk about what she said earlier on.  When Yuu notices Haruka’s absence she decides to look for her, as it just so happens she spots her sister and her best friend talking alone and hides behind a tree and listen in on their conversation. Mitsuki asks Haruka out on a date and for some reason Haruka asks what a date actually is; apparently it’s holding hands, walking together, staying at each other’s houses and kissing.  Mitsuki was right in saying that Haruka didn’t get the true concept of love however that didn’t mean her feelings for Yuu were anything but; it was because of how important Yuu was to her that Mitsuki developed an emotional attraction towards Haruka. With this knowledge and confirmation, Mitsuki is comfortable with Haruka being with Yuu and gives her a kiss on the forehead. 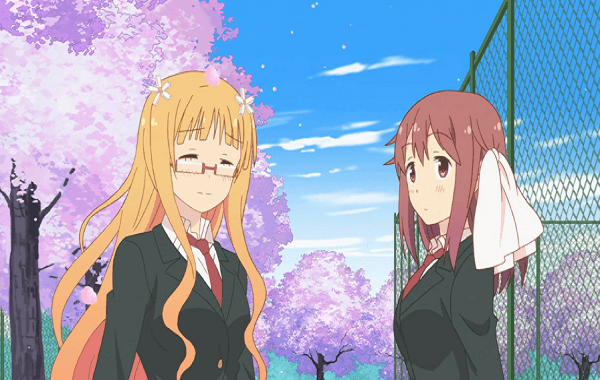 After Mitsuki leaves the tennis courts she discovers Yuu was there the whole time, Yuu then grabs Haruka and takes her to the unused room where they shared their first kiss. Haruka and Yuu hold each other and begin kissing, before each locking of lips they say their true feelings towards one another… “I love you.” The episode ends with all original six girls entering school as second year students; the sakura petals dance around Haruka and Yuu as they hold hands and enter a new year of school, adventures and yuri memories in the making. The sakura petals and fade to white was the finishing touch that made this one a pleasant ending.

Overall this was a great way to end the entire series; not only was the story plot good, but the still shots and music worked perfectly together to create an amazing finishing episode. The way they treated Mitsukis’ attraction towards Haruka wasn’t my favourite part of the series, however I did like the way they ended it. 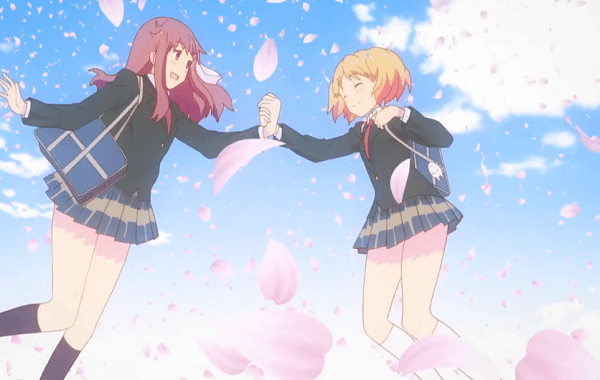 I have said before that the humour was lacking in some parts of the anime and the focus should’ve been divided more amongst all six girls; but the dramatic moments were genuinely gripping, there were some great jokes and the other four girls made the most out of the little screen time they had. The fan service in the anime was noticeable, but only distracting in a couple of instances. Each character had their own uniqueness and their interactions with each other felt realistic and also charming (Shizuku X Kotone, yuri couple 2014). I have a feeling more yuri anime will be popping up throughout the rest of this year and Sakura Trick was a great one to get the ball rolling. Kiss, kiss, kiss, this show had me entranced. 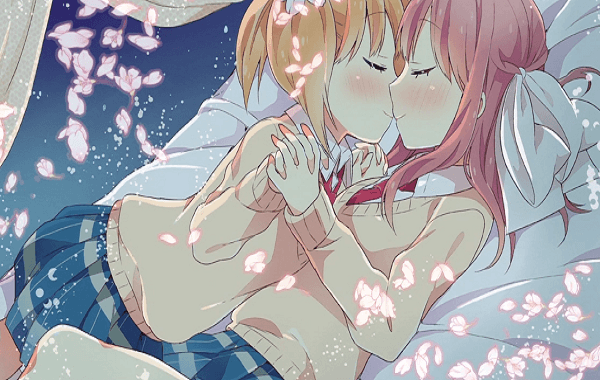