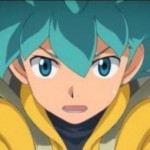 With such an amazing cast compiled for Gundam AGE, the series is shaping up to be potentially the best Gundam series yet. Only time will tell once October 9th rolls around. Leave a comment below letting us know what you think of this cast.