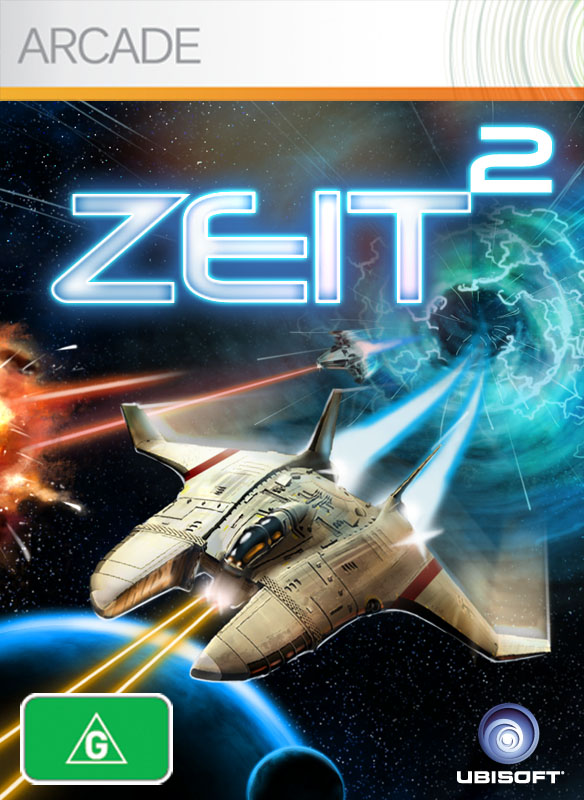 “Experience the next generation of shoot ’em ups with Zeit²! Travel through time to co-op play with a copy of yourself! Pull off amazing moves to defeat 8 massive bosses! Pace the game and improve your score with the powerful fast forward feature! Discover 6 unique game modes and beat 70 challenges in this innovative and action packed arcade game!” (Xbox.com)

There are many side scrolling and 2-D shooters on the market today.  The Xbox Live Marketplace has reignited that type of gameplay and often, this has led to innovation.  After all, with the glut of shooters out there, every developer must seriously think about how to attract buyers and a fan base.  Zeit2 is one such game that tries to create a new idea.  Does  Zeit2 bring originality to the masses?  What does Zeit mean anyway? 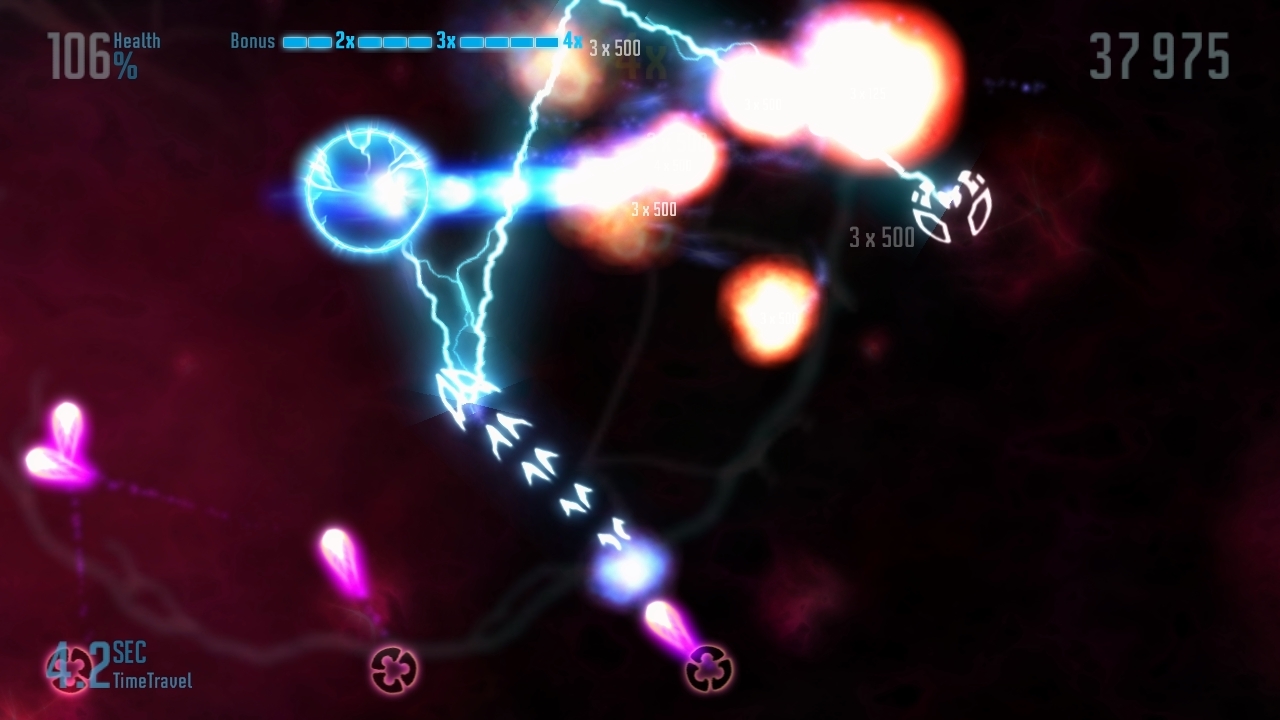 You are a floating ball  of clear energy.  And you can control time.  For some reason, fossils are attacking you.  Oh, and you also have a plasma gun.  The gameplay is very simple to figure out.  Fire at the enemy fossils and avoid letting them get past you.  One unique part of the game is how the health system works.  Not only do you lose points when an enemy slips by, but the enemy also drains health from you until they are off the screen.  Also, shooting your gun when no enemies are present will also make your health percentage drop.  While this adds a layer of strategy to the game, it is also very annoying. One other interesting feature is the way you shrink as your health drops.  Starting out at 100% health, you area  full size bubble.  As you grow closer to 0% you slowly shrink until you blip out of existence.  But we will talk about your existence as bubble a little later.

Of course, the most unique part of the game is the time travel element.  If you miss an enemy, you can rewind time and watch your “time shadow” take out the enemies you just took out.  At the same time, you can shoot up the enemies you missed beforehand.  But what is a game without sweet combos?!  Well, Zeit2 has that also.  By shooting at your “time shadow” you can create all different kinds of explosions, havoc and chain moves.  For example, when you shoot your “time shadow” it will spray the plasma everywhere, taking many enemies out at once.  When the game adds in specialized weapons like a beam shot, you can create many different kinds of pretty fireworks that consume those dastardly time fossils.

The boss battles in the game are awesome.  They all require creativity and reflexes to beat.  And when you are finished beating the campaign, there are plenty of other options in the game.  To illustrate, one of theses modes is called Tactics.  Use your time traveling gifts and know-how to strategically and tactically get through each level.  There are plenty of other modes too.  And all you have to  do is play each mode once to unlock the next mode. 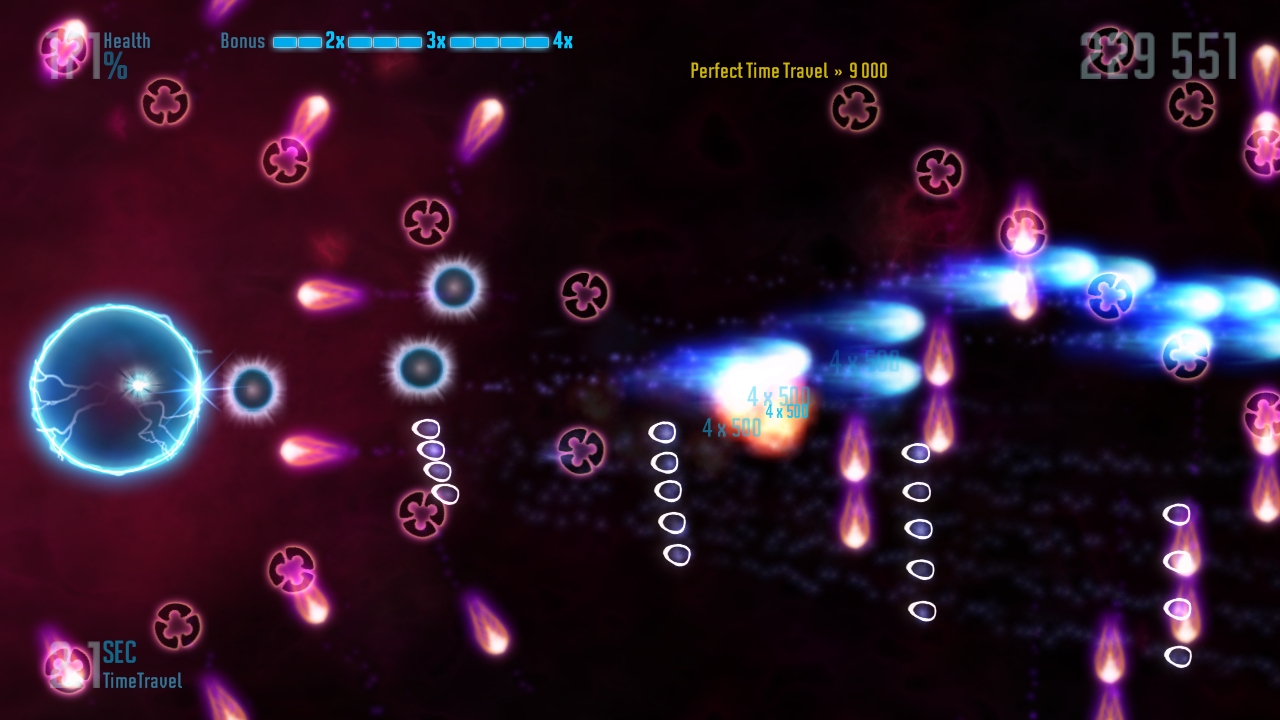 Weapon cues are a great thing to have in the game.  When new foes approach, you also get a different sound cue.  The soundtrack in the game may not be a symphony to your ears, but it will spice up the drab graphics.

Probably the  most boring part about the game is the graphics.  Bland blue backgrounds are absolutely awful.  And except the bosses, all the enemies are white. In addition to the terribly boring colors, enemy variety is also lacking.  While the  game is graphically tepid, it does not quite ruin the game. The time travel mechanic is good enough to replace the terribly boring packaging.  Another part of the game that really ticked me off was the small text.  Sure, there were usually videos  showed what the text said, but it is still great to be able to read the text.  Most often, the text will explain much more than a video.  Although many people do have HD television, it is ridiculous to assume that everybody will have one and will be able to read the small text in the tutorial. 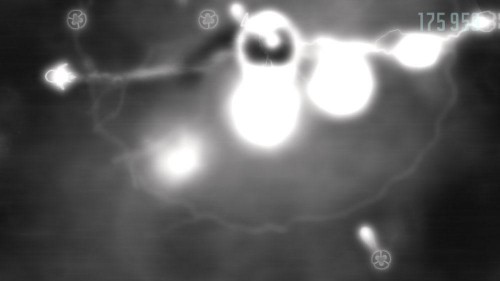 Having a Bubble as a main character seems like an odd choice to me.  I found it really hard to get excited about the game. I was confused about why these  creatures were after me.  But, I suppose a spaceship is generic.  Time travel may be more flashy in the movies, but the 2-D space shooter implementation of time travel is well done.  Controlling time is awesome in any game.  And, you have control over your difficulty in the game at all times.  In addition to the ability to rewind time, you can fast forward time.  Trust me, by fast forwarding the game, the difficulty skyrockets.  You may want to try the demo first, but a unique space shooter in this day and age is great.  And with a name like Zeit,(which means Time) you can’t go wrong.