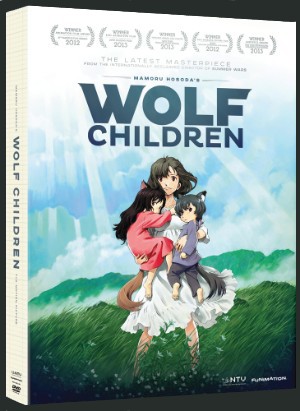 Overview
Mamoru Hosoda already has a good record as a director with his films The Girl Who Leapt Through Time and Summer Wars, the latter being the stronger of the two. Now his newest has been released to North America and we can see how it stacks up to all the praise and awards it has received. Is this another gem that deserves the space it would take up on a shelf, or is this something that doesn’t quite live up to the the hype. Let’s look at what Wolf Children has to offer. 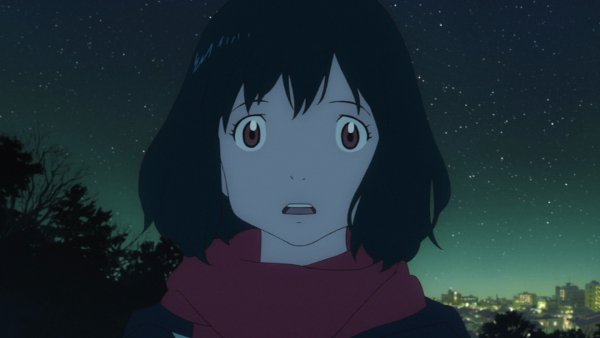 Story
Despite the title, the main focus of Wolf Children is actually Hana, who is in fact the mother of the titular characters. The film itself starts off with the story of how she met the father of her children, her a college student in Tokyo and he working multiple jobs and sitting in on classes in his off time. They end up falling in love and staying together even when he reveals that he is a wolf man. Interestingly, the father is never given a name throughout the film only being referred to as him, he, or father to the children, which does a good job of not undermining his presence, but re-enforces the idea that he was just a regular person even when being part wolf.

Eventually the two have two children, a girl first and a boy a year later and the movie begins to show the troubles that Hana will face for the rest of her life. Being too afraid to go to a hospital or seek a midwife, as they don’t know if they will be born as a human or wolf, she studies home birth on her own and handle it themselves. This foreshadow is strengthened when Hana loses the wolf man and is forced to raise their children on her own. Then chronicles the struggles that Hana faces within the city until she decides it would be best to move out in the country where they would be more secluded. 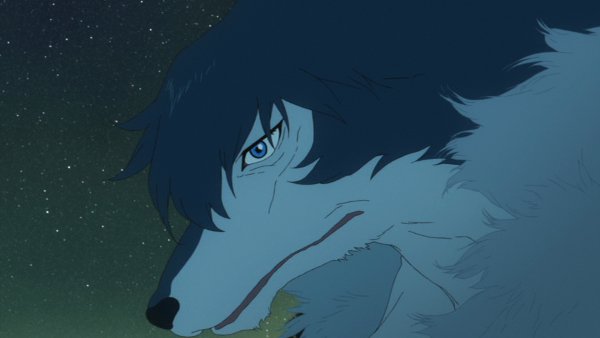 The countryside sees the vast majority of the story, as the children are faced with growing up part wolf and must find their place in the world with their mother at their side trying her best to guide them. Even with the explorations of the growth of each child into who they will become, either wolf or human, Hana is still the main focus as it all echoes back to her in the way only a mother can feel. The story and growth the kids and their mother experience provides a great emotional that can easily echo back to the struggles of almost any mother, single or not even without having to raise wolf children.

Visuals
Those that have seen Summer Wars will have a good idea of the quality of the animation in Wolf Children, just without anything as impressive as the online world of OZ. The character and setting animation is on par with the real world animation on Summer Wars, but the added detail that went into the wolf man and children’s various transformations. The initial transformation of the wolf man himself is beautifully done, with a slower transition to show off just how much of him is changing. While the transitions themselves after that are covered or blocked in some way, the initial one sets the stage for the viewers to fill in those own gaps. 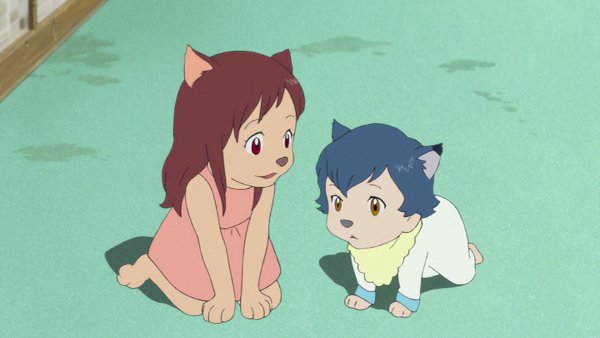 The look of the characters is very simple and very real world, for everyone except the children, which fits well with how the movie portrays everyone. The designs for the children themselves does a great job color coding them to easily tell them apart even when wolves, but look great at every stage of their development from toddlers to young adults. This attention to their design makes up for the lack of the flasher animation from Mamoru Hosoda’s prior films.

Audio
The voice acting for both the Japanese and English are good, but there is a great deal that changes for the English translation to fit the lip flaps. Because of this, the Japanese really seems to be the superior version of the audio. However, even though those viewing with the English voice acting may miss out on specific details and nuance left out of the translation it is still a great experience for those that don’t normally watch movies with subtitles. The best of the voice acting is for Hana though, as she is perfectly represented as just a woman learning and guiding her children and not necessarily the standard “mother figure” creating a great dynamic for her. 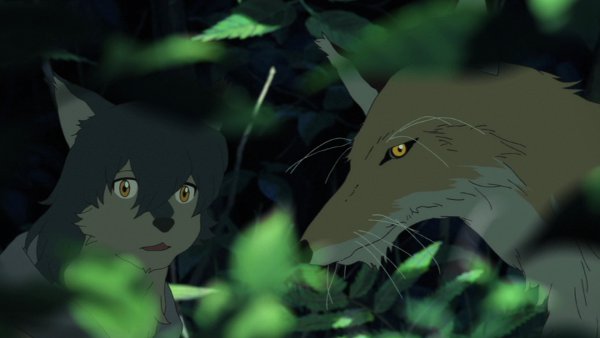 The music throughout the movie is very quality work as well, but the stand out piece is “Okaasan No Uta” sung by Ann Sally. The lyrics being written by Mamoru Hosoda himself do an amazing job encapsulating not only the movie and the characters’ growth, but the emotions invoked throughout the story as well. The use of it throughout the movie to carry some heavy lifting during montages is excellent, but having the song in its entirety run over the credits make it a fantastic capstone to the experience.

Extras
Collected on two discs this release finds fairly standard audio commentary by the English dubbing team as well as the trailers for it and other recent FUNimation releases. The second disc however is packed with the greeting the Japanese crew gave to the different showings Wolf Children had over the course of 2012, from the Japan premiere, to the world premiere, to other special events it was shown, at all offering insights from the director and Japanese voice cast. To cap it off there are also the director’s cut of the Japanese trailers done in two different ways, one focusing on the children and the other focusing on Hana. 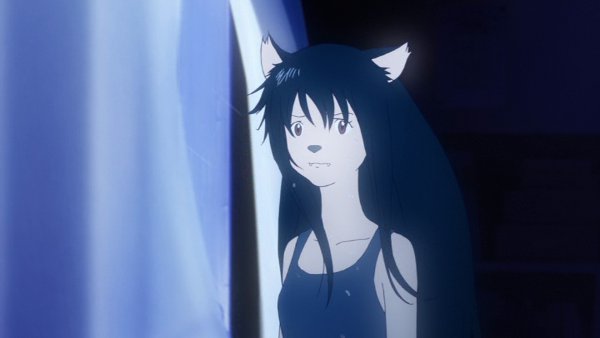 Overall
This is a story that viewers of both anime and movie in general can watch and enjoy. The animation is well done and featuring a song specially written by the director himself to fit the story, characters, and feelings. This is a great movie that is but one step down from Summer Wars in a few areas, but a big step up in others. This is not a story just about Wolf Children, but the struggle they and their mother faced together to become who they are.