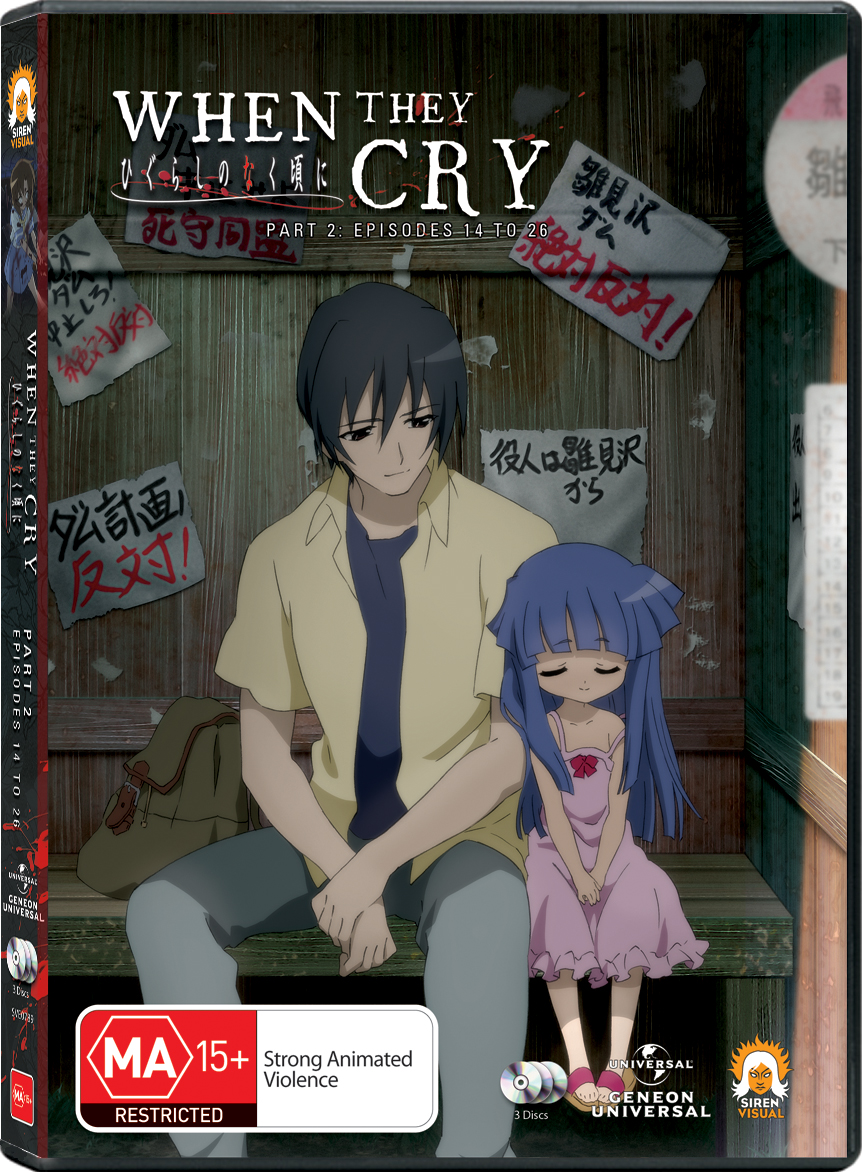 Overview:
In what appears on the surface to be a cute little girl drama series, turns out to be something comparable to Twin Peaks and even Elfen Lied, you have When They Cry or to those hard-core otaku out there Higurashi no Naku Koro Ni. A series that takes brutality and hysteria to the next level. What you have here is not for the weak. This is an anime that doe not have mercy for either the characters or the viewers.  This is no-holds-barred anime at it’s finest.

Story:
When They Cry tells the tale of a town brought to the brink of insanity. A cursed town where time is of a different nature, and murder is rampant. The series piles on mystery after mystery. With each question answered a new question is posed and the plot-thickens. This collection concludes the first season of the series (which has spawned multiple sequels), in a fairly satisfying manner whilst leaving room for a sequel (which it already has recieved).

This particular collection features the Time Wasting, Eye Opening and Atonement chapters, with each taking up several episodes. I particularly found the Time Wasting chapter to be the most interesting as it laid a lot of the ground work for what was to come. The Atonement chapter provided a satisfying end and gave an explosive (literally) conclusion to the series as well as hope for the towns peoples future. 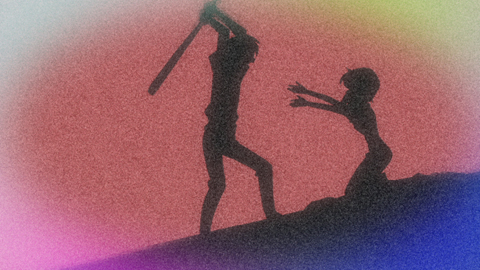 Hit me baby one more time!

Without going into to a great ammount of spoilers it’s worth noting; time and the effect it has on a person is a central part of this series. With time and other problems plaguing the town not treating these characters too fairly, things begin to spiral into insanity with some extremely depressing and gruesome occurrences taking place.

The downfall of this all though is that at times the horror is laid on too thickly over the cutesy characters which can be quite jarring to the viewer. Overall the series storyline is one that will definitely keep you both entertained and guessing, whether it’s going ultra-violent or twisting the plot, it’s definitely a strong part of the series.

Characters:
The characters are all very well written and each embodies the insanity and isolation that the series world forces upon them. The only negative to be said about them is that they all generally fall within the stereotypes of the genre. I personally found the little girl characters to be extremely stereotypical and in turn became difficult to empathise with, as they each are simply just cute yet with a dark side.

However the characters themselves are good enough to not be entirely pulled down by being slightly stereotypical. Partly due to the brilliant writing of the series as well as the great voice work from the voice actors. With both dub casts doing a great job with the characters. 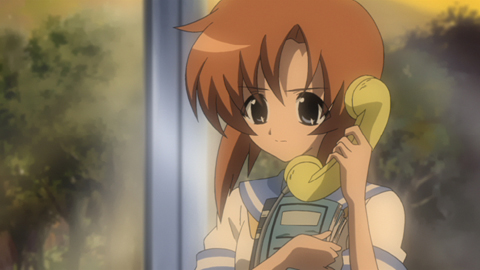 Artwork:
The art style of the series is suitably grim with a juxtaposition of cutesy moe characters. This both works and doesn’t work simultaneously. It works in that it provides quite a large amount of shock value at witnessing what is taking place with these cute characters doing horrible things. It doesn’t work in that it can feel incredibly jarring to those who aren’t adjusted to such ultra-violence, particularly from cute little girls. However, this is all extremely distinctive and does make When They Cry stand out from the crowd.

The animation is brilliant with a fair amount of detail placed into the character movements with only a few clunky looking scenes (particularly when someone is thrown, it looks static to some extent). Thankfully the animation is generally well done and brings the characters to life wonderfully. 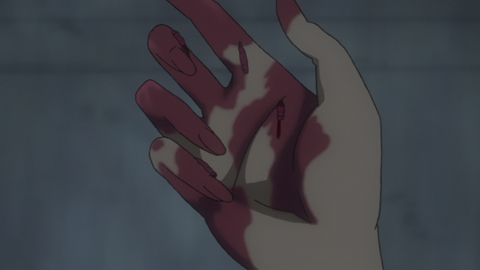 Audio:
When They Cry’s soundtrack is relatively decent, with a great deal of good tracks. The only let down on the soundtrack is that it is essentially nothing more than stock music for this kind of series. The tracks are what you’d expect, eerie, moody and in some scenes poppy.

The opening theme is very good though and perfectly sets the mood for the show, being an ominously creepy tune, featuring a mash up of cute and freaky imagery in its video. The singer’s voice sends a chill down your spine as she repeats the same line as though she were stuck in a loop (clearly to signify the state of time in the series). The ending theme is equally good and also featuring equally creepy imagery.

As I stated previously all the voice actors on both audio tracks (Japanese and English) where absolutely on their game with this series and showed the characters the delicate care they deserve (even if the characters don’t show the same care to each other). The audio work all-in-all was very good, apart from the less than stellar background music which was simply expected and a little bit average compared the the opening and ending songs.

Special Features:
As with all Siren Visual releases to date, When They Cry does not feature a significant amount of special features apart from a nice slip case and a few trailers for their other releases. This is a continual problem with Siren Visual releases that often let down the overall experience of the collection.

I personally would have liked to see some commentary or production art at the very least. But I have grown use to Siren’s releases featuring little to no special features so I can’t say I expected anything more from them.

Hopefully in the future Siren will include more special content and features to their releases, as their is little reason to stick around once the final episodes credits roll, other then to rewatch it. Only time will tell. 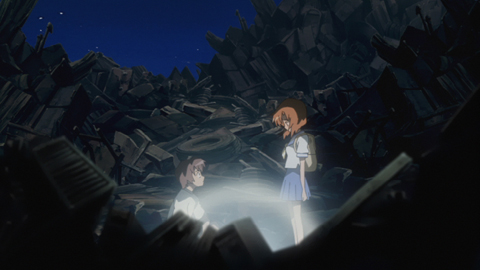 How did you manage to get a flash light stuck in there!?

Conclusion:
When They Cry Part 2, is a great conclusion to a great series. However it is a difficult anime to recommend as it features high amounts of ultra-violence and imagery that can be considered frightening to many. This one seems to be tailor-made for the hard-core otaku crowd with very little lee-way for the mainstream audience. Despite this it is an overall great series and is definitely a sight to behold.

I give When They Cry Part 2: