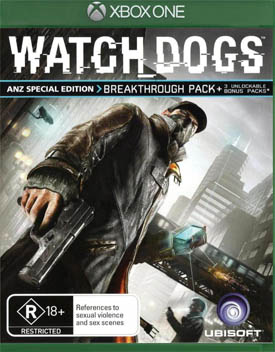 Watch_Dogs has had an interesting journey. First it was announced at E3 2012 and the crowds went wild, then the hype train showed no signs of slowing down and before long it was the most highly anticipated game of 2013… Then it got delayed and gamers began to grow cautious of Ubisoft’s new IP. Well now it is here, and while it may not be the next-generation experience that players were expecting, it is still a fun experience that wears its inspiration on its sleeve. 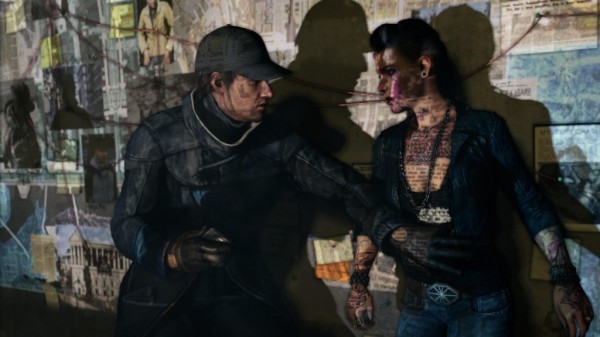 You would be excused for thinking that Watch_Dogs is a story about Big Brother and a critique on how our reliance on technology is becoming one of our biggest flaws as a society. The game’s opening even leaves you to believe that this is the case, but the concept kind of falls by the wayside by Act II, where it gives way to a plot that features our protagonist in the middle of a gang war through Chicago’s underbelly. It is a little disappointing that Watch_Dogs went for a more generic route with its storytelling, but for the most part it is still an enjoyable cinematic experience.

Aiden Pierce is the star of this tale – a vigilante on a mission. After his niece is killed, he has vowed to find the men responsible and bring them to justice. His weapon of choice is his trusty smart phone in which he can hack his way through any security system or personal account that he can see. Aiden seems to suffer from the same problems that plagues Connor in Assassin’s Creed III in that he really isn’t all that compelling a character. His motives are pretty straight forward, and he feels 2-dimensional and sadly quite forgettable. 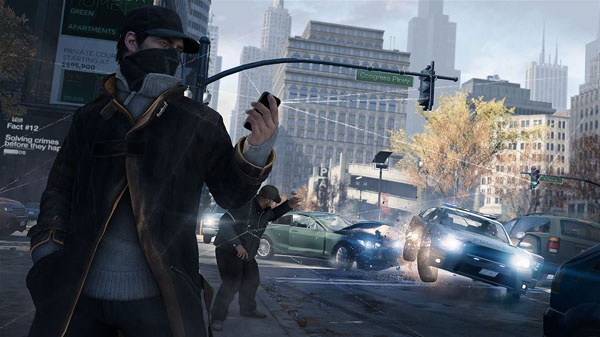 Watch_Dogs feels like a little bit of a mix between Assassin’s Creed and Grand Theft Auto, with a big emphasis on the latter. While playing I was actually reminded of the old True Crime games. The morality choices, reputation and even the use of vehicles all seemed very reminiscent of those games. Not that this is a bad thing, but it really isn’t something we haven’t seen before.

Missions do have a pretty wide variety and a tonne of ways you can approach them. You can approach missions as a gun-totingmad man, or or by stealthily sneaking your way through like Ezio in Assassin’s Creed. Either way you will utilise your phone to distract enemies, set off explosives, activate environmental traps and other goodies.

The hacking mechanics that form the crux of the game are fun and intuitive, but could have done with some fleshing out. Most of the time you will just be stealing money off pedestrians or changing the colour of traffic lights. You of course unlock more abilities as you progress through the game, but they all operate in the same manner – aim at object you are hacking and press X. There is a lot to be said for simplicity, but I just felt unsatisfied with the whole mechanic.

NPC’s all have a backstory, and aiming your phone at them will give you a brief insight into their life, their income and whether or not you can hack them. I don’t know if I just got unlucky or if it is part of the game, but pretty much every person I tried to hack had some kind of anxiety issue or problem that could send a real-person on a very quick downwards spiral should they have money stolen from their bank account. 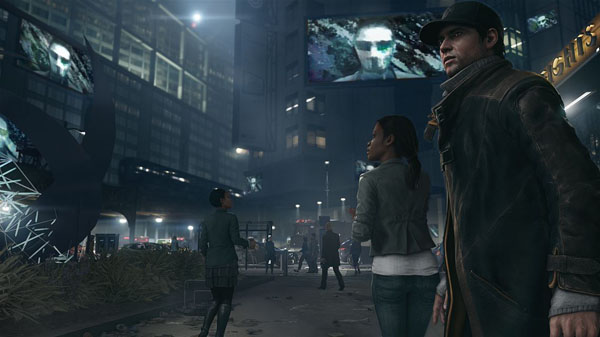 The true weakness of the game comes in its driving sections. Chicago is a big city and to get around it you will be hijacking a LOT of cars. Doing so feels pretty much exactly like a Grand Theft Auto game, and the comparisons don’t stop there. Aiden can and will be hunted down by the cops, but instead of a star rating, the CPD use a scanner to identify and apprehend criminals. Staying inside the scan range for too long will have a swarm of police cruisers (and helicopters) on you in no time. If you haven’t been identified and are outside the scanning range, a percentage metre will slowly deplete and when it gets to 0% you are free and easy. It is a nice twist on the whole “star rating” system but you can still feel the inspiration oozing out of the game. 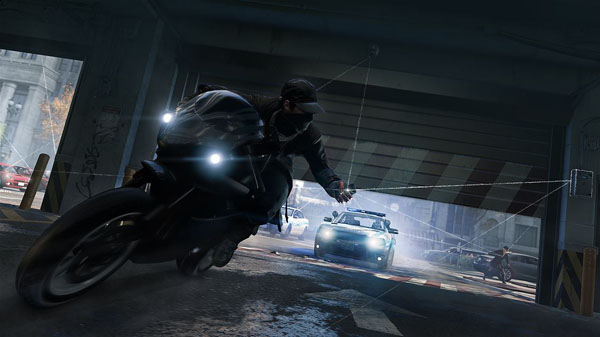 So there is one thing that Watch_Dogs does unequivocally correct; the sound. Everything from Brian Reitzell’s amazing score to the choice of music that plays through the car audio sounds fantastic. Reitzell has managed to create a score that conveys the game’s sense of dreariness and desperation, while at the same time managing to kick it into high gear should the need arise. Then comes the game’s use of licensed music. The track selection in this game is MASSIVE and covers a massive range of genres. Rap, pop, old school rock and roll, they are all here and they make the city feel alive. This sounds like a real person’s track list that they might have on their iPod, and it just gives a great sense of authenticity to the whole package.

Even the voice acting is great if not occasionally misplaced. Aiden’s dark, almost batman-esq gravelly voice does not fit his babyface at ALL, to the point where it seems like someone has overdubbed the game’s audio like they do in foreign films. Despite this everyone puts on a fantastic performance, and the character models always seem to match up with the dialogue.

As for the visuals themselves, there is no denying that Watch_Dogs is a pretty game. Even with the 900p resolution, the world was still clean and crisp around me. There were some issues of low-definition textures that made the game a little jarring, but considering the scope and size of the world it is easy to overlook these.

Chicago is beautifully recreated here, and if you compare the Watch_Dogs version to the real world city, you will find so many comparisons that it is scary. The unfortunate part is that Chicago is kind of a bland city. Nothing particularly stands out or is attention grabbing. This is something that players are likely to disagree on but for me personally, the realism was actually kind of a bummer. 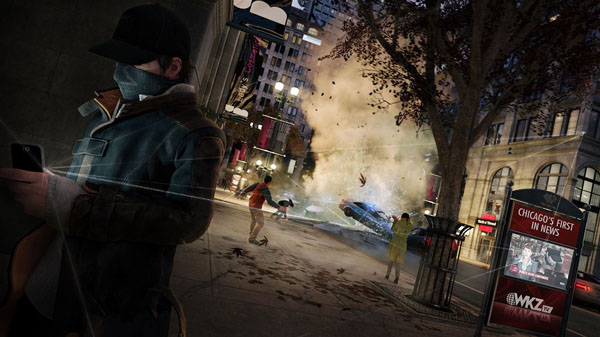 Watch_Dogs is not a generation-defining game, nor does it bring all that much to the table that we haven’t seen before. Despite all this, Watch_Dogs is still fun. The large open city of Chicago provides a nice grim backdrop to the action, and the hacking mechanics, while not quite fleshed out enough to provide enough of a gameplay change to what we’ve seen before, make it interesting.