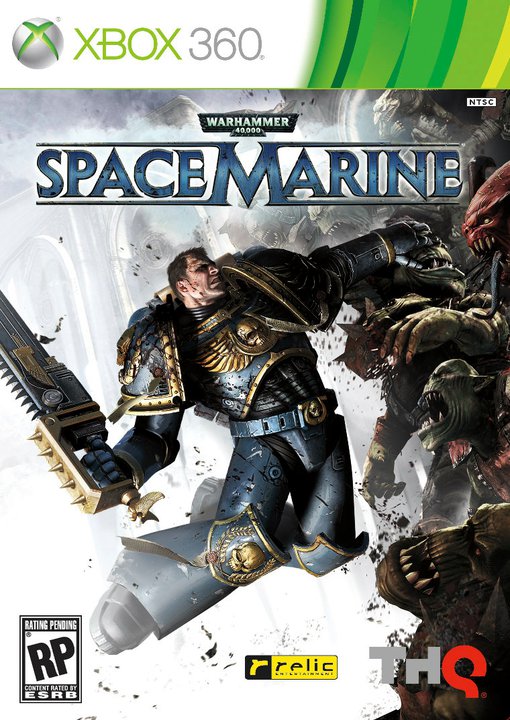 Overview:
Several months back, I reviewed Warhammer 40k: Kill Team for the Xbox Live Arcade. That game was a great arcade style shoot ’em up that honestly felt at home within the Warhammer 40k franchise.

Unfortunately that brings me to the very sad news, that when put besides the game that was brought into existence to promote it, Warhammer 40k: Space Marine, is an absolute disappointment in every bleeding sense of the word. It stands amongst the great titles under the Warhammer 40k franchise as a point of utter shame.

If only Relic Entertainment had aimed more for the spirit of Dawn of War instead of Gears of War, Space Marine may have been something more than an utterly mediorce shot in the dark. 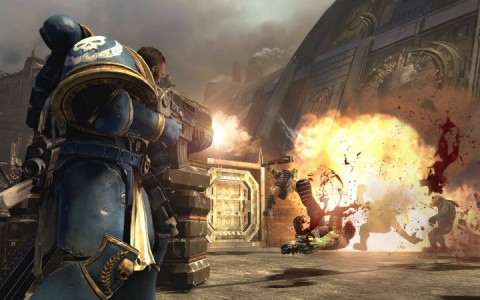 Story:
Space Marine has a story like Pokemon has a story. It’s kind of there but doesn’t really matter at all. I mean both games are about fighting monsters. At least Pokemon has variety in enemies and more diverse gameplay. Space Marine instead lets you take control of… yes you guessed it; a Space Marine. That is literally the entire story in a nut shell.

The characters are as bland as you could possibly imagine. They are blank faced zombies with no other facets of their personalities besides being ‘noble’. It’s such a poor attempt at crafting characters that when there was something that was supposed to be a plot twist turns out being a moment where you gaze at your screen confused and say “And I care why?”

This lack of any real story causes the campaign to be nothing but a completely boring experience. There is never any feeling that you are working towards something. It just feels like you keep killing orcs until it’s over, any cutscene that does appear either makes no sense or doesn’t progress anything forward.  More time was definitely needed in crafting this story, there is no doubt about it. 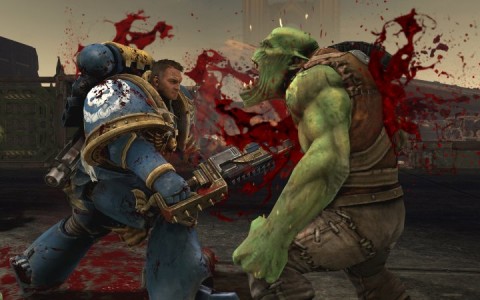 Gameplay:
If you thought the gameplay could atleast make up for the lack of a coherent story, then you thought wrong. Like the plot, the gameplay is just one big shot in the dark. It is almost as if Relic pulled a genre from a hat and then slapped the Warhammer name on it.

From the first few moments of the campaign you will instantly get the feeling that you are playing a watered down version of Gears of War. There is no two ways about it. Space Marine is a Gears of War clone that doesn’t even succeed in at least being as good as the game it clones.

The game is sluggish and extremely repetitive, without enough variation in gameplay to keep it interesting. Things quickly disolve into a bore, which is always a bad thing. But that is the very core of the problem with Space Marine. It is just straight up Gear of War minus a cover system but plus the Warhammer name. They may as well have called the game Gears of Warhammer 40k: Space Marcus Fenix, it certainly would’ve been a more accurate title.

Even the multiplayer lacks even the smallest bit of entertainment. Part of the fun of Gears of War is strategically using the cover system to your advantage in intense fire fights. Since Space Marine doesn’t bother to completely clone Gears of War, it’s combat is so disappointingly scattershot in composition.

There is no way to cover in Space Marine, thus giving you no other option but to try and run in and melee attack an enemy. Which in online multiplayer is always a matter of whoever strikes first wins. After playing for a couple hours I do not see myself venturing back in to the online mode as not only was the combat a mess but the power between high and low levels is so unbalanced that it is virtually impossible to even stand a chance against higher level players if you are just starting out.

This brings me back to the combat difficulty of the multiplayer. It is essentially futile to even bother with using firearms as more often than not the enemy will just run up and impale you on his chainsaw before you have even made a dent in his health. It’s a broken system that gears play towards a melee fest that destroys any semblance of hope this game had to be that ‘killer online shooter’ this year.

All in all, Space Marine is a poorly constructed mess that can’t even pride itself on being a half way decent clone. Everything about the title is so painfully average that there is very little fun to be had here. 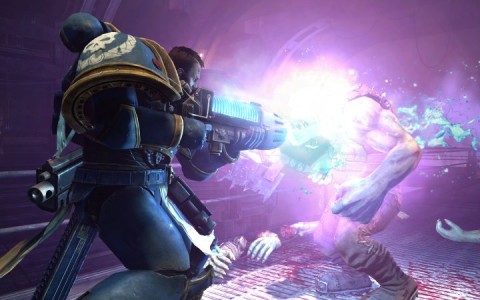 Visuals and Audio:
Space Marine’s art direction seems to be quite clear: to put Warhammer characters in Gears of War. That is the product we are given in the end, a haphazardly splashed together baron wasteland that it constucted so deliberately that it doesn’t even come close to replicating the unique environment design of Gears of War, no matter how hard it tries. If it achieves anything that Gears did, it’s that it manages to show off just about every shade of Brown known to man. Which for fans of the colour Brown is certainly some great news, right?

Put simply the game aesthetically does not stack up. So how does the audio fare? Well not much better. It features the expected ‘epic-scale’ orchestrated soundtrack which proves to be nothing more than forced and unnatural. What’s worse is the horrible stiff voice acting. It appears that Relic used American voice actors to do British accents, which in the end comes across offensive more than anything. The voice acting is pretty much a complete mockery of the accent to the point that I’d consider the accent to be ‘slaughtered’ more than the Orcs in this game.

If anything Space Marine proves that Relic should be making RTS games, it’s what they are good at and it’s what Warhammer is suited to. Space Marine fails as both an attempt for Relic to branch out as well as being a decent Warhammer title, it even fails at being a half way decent game.