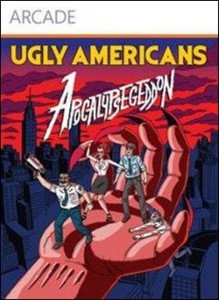 Overview
As soon as I saw the trailer for Ugly Americans: Apocalypsegeddon, I was pumped. Who wouldn’t be excited about crude humor, lots of blood, sexual themes, and swearing galore? Taking queue from the TV show Ugly Americans, our beloved cast is featured in an action shooter that implements RPG elements. The playable characters are Leonard (drunken wizard), Grimes (the tough cop), Callie (the hot demon chick), or Mark (the lucky human). Even though the main character tries to pacify each situation, you end up killing everything in sight. Sit back and relax for the entertaining blood bath!

Story
Our friends at the New York’s Department of Integration have stumbled upon “stranger” happenings in their immediate world. Demons, zombies, and birdmen roam the streets of NY making a path of destruction. Only by completing case files given by Twayne (leader at the DOI) can our four heroes find the source to the end of days. 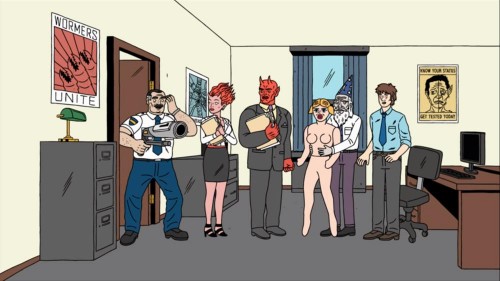 Gameplay
Ugly Americans: Apocalypsegeddon operates on a simple control mechanism. Utilizing a duel stick, the player can control movement and throwing direction. With basic instinct of shooting and avoidance, anyone can pick up this game and enjoy the crude pleasures it offers.

Each playable character has an individual leveling system and attributes. As you level, you can place points in different attribute slots such as speed, health, damage, special attack, special recovery, and luck. Allocating points evenly can be a safe route, but you can differ greatly from online players at low levels. Some players may choose speed over attack power or special attack over health. Leveling is both fun and experimental. 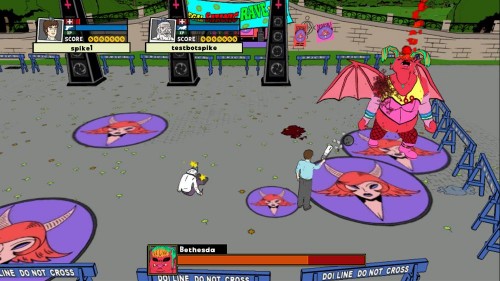 The right control stick shoots out a throw-able item that is in your inventory. Throughout each case file you can find items under boxes, garbage cans, and even food stands. Items can have the following characteristics: explodes on impact, enemy penetration, and multi-directional shots. Your arsenal of weapons affects your character’s attributes as well. Let’s compare the baseball and propane tank. The baseball fires in a single line at a very fast rate while sacrificing damage. Propane tanks offer a wider spread of moderate damage at a slow rate. Additionally, weapons can have bonus effects on certain characters. If Mark uses the baseball, he can potentially stun his opponents. And if Grimes uses the propane tank, he creates an even bigger area of damage. Watching out for these special effects can help immensely during gameplay. 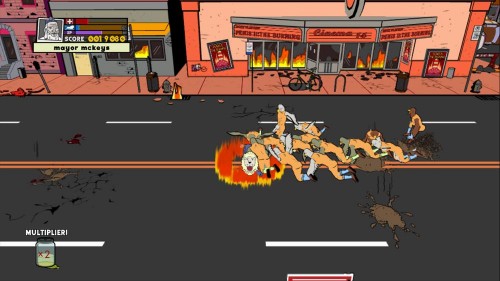 Cooperative play online is a necessity to Ugly Americans: Apocalypsegeddon. Hardly ever are you readily equipped with three others ready to play in the comfort of your home. The online feature allows you to pick up 1-3 more guests to play through case files together. The best part is that you can select invite, search, or remove to pre-determine how many people you want in your group. It is possible to invite a friend, search for an available player, and remove a slot at the same time.

Boss battles are tough. Adding a competitive edge to the game, the boss battles create an interesting flow to the game and ultimately bring players closer together. Yes, you probably want a better score than yours truly, but you want these bosses dead – especially the last one. Defeating the hordes of minions is key and requires focusing attacks. Additionally, bosses have special attacks that do heavy damage or stun for several seconds. The worst thing to do in this game is to get trapped. Please stay out of corners unless you want to die. KEEP MOVING! 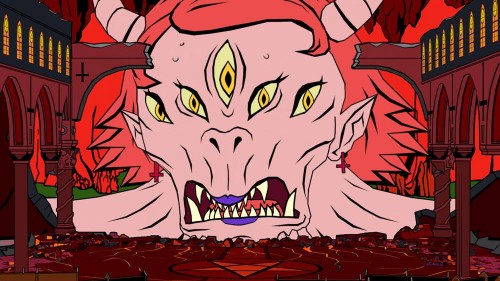 Graphics/Audio
Blood, gore, manbird crap, dead creatures tend to fill up the screen at times. This just means you are doing your active duty for the Department of Integration. Be able to break food stands and garbage bins adds a fun factor by interacting with the environment. The only addition I would make would be to explode vehicles. Otherwise, graphically this game is amusing and entertaining.

The cut-scenes play out as a low budget film strip from the actual series Ugly Americans. The reason I say low budget is due to the lack of animation that is normally seen from the series. I am guessing this was done to keep the game simple . With that said the story is still enjoyable and can interest newcomers to the show – or Callie Maggotbone.

What can be said about the sounds of the game? One word describes everything, hilarious. With manbirds screaming suck my @#$%, it is hard not to laugh when you completely decimate them. The humor is crude, very crude. Prepare for a laugh.

Overall
Ugly Americans: Apocalypsegeddon combines comedy and gameplay almost too well. If you are not too busy playing, you are laughing your ass off at the cut-scenes. With cooperative online and local gameplay, this is the best new action shooter you can get your hands on. This game is definitely worth the affordable price of 800 Microsoft Points. At least take the time to play the demo because you will not be disappointed.