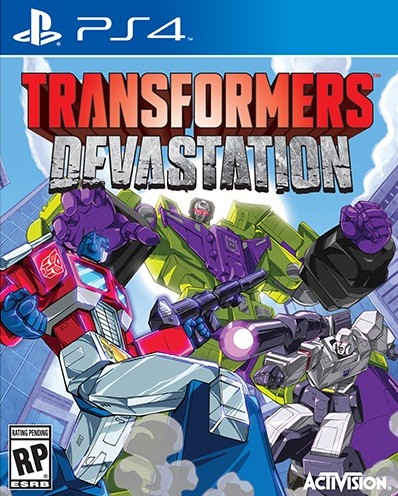 Transformers is easily one of the most popular toy lines in the world and it would be hard to find someone who doesn’t know of their existence. I’ll admit I was never into the original series, first getting into Transformers through the recent movies and the excellent Transformers Prime animated series which you should check out if you haven’t. That being said I was very excited when I saw the first trailer for Transformers Devastation with it’s fast paced action and impressive cel shaded graphics. With renowned action developers Platinum Games behind the helm, has this legendary franchise been done justice or is Transformers Devastation destined for the scrap heap? Read on to find out. 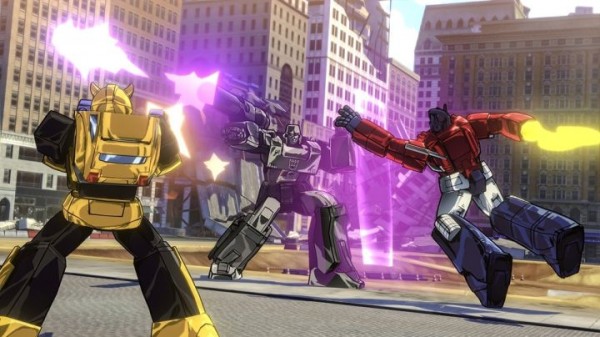 If you’re familiar with the original animated series or Transformers in general then the story is basically what you would expect, the Autobots fighting the Decepticons for ancient relics that have the power to restore their ravaged home of Cybertron. That is basically what you get in Transformers Devastation and it’s pretty disappointing as most of the meaning behind this feud is lost due to the games short length. It’s serviceable but honestly just felt like a way to string boss battles together. There is no doubt however that fans will squeal with nostalgic joy when a recognisable character emerges, looking, sounding and acting just like they did in the 80’s original run of the series. Unfortunately those same fans will probably find the story the most predictable.

Perhaps the most disappointing aspect of the game is its level design and environments. Most of the game takes place in the same, lifeless city and it get’s boring to traverse quickly as it wasn’t the most interesting place to begin with. When you get out of the city it’s a breath of fresh air but the other environments aren’t much better and it’s not too long before you are thrown back into the exact same city you’ve already explored. Combined with poor pacing with the overarching chapters feeling a little too long, Transformers Devastation could have benefited greatly from shorter, more varied stages. 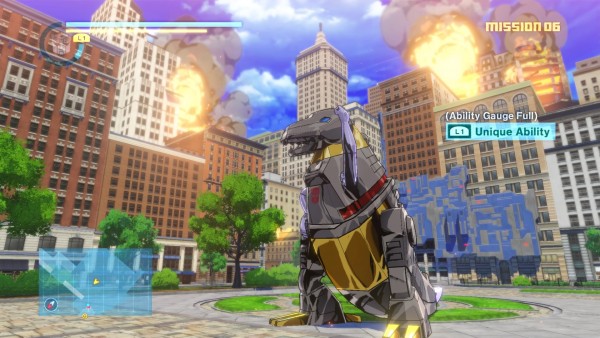 It should be noted that the story will only take you about 5 hours to polish off. While this may seem like a negative, it is important to remember that the game is priced at a cheaper price point and this is in no way the end of the actual game. A separate mission mode exists as well as two unlockable difficulties which add a lot to the replayability, especially if you’re one of those players who wants to achieve the highest ranking on each mission (SS in this games case).

Fortunately, striving for those SS ranks is made fun thanks to a fantastic combat system focused on flashy melee, ranged combat and dodging. This is the action genre near perfected. The ‘bullet time’ mechanic borrowed from the critically acclaimed Bayonetta series (also developed by Platinum Games) really rewards the player for their battle vigilance and is satisfying to pull off. The awesomeness of the gameplay is best seen for yourself, so feel free to watch me kicking some Decepticon butt in the short video below.

While there a decent number of combos at your disposal, it is most likely in the franticness of combat you will only stick to a select few. However there are a lot of other advanced combat options available to you, some of which have to be purchased first like the parry or shove attack. Each Transformer also has a unique ability which normally helps continue a combo as well as a screen clearing Ultimate Attack which can be used once the special meter is filled. Initiating combos, switching between melee and ranged weapons and even transforming into a vehicle all feel effortless and responsive thanks to the tight controls and well thought out control scheme (which you are free to remap if you don’t like it initially).

Outside of combat you will be exploring the maps looking for hidden caches or completing various side missions. These tasks are rather basic but serve their purpose in breaking up the combat with small mini games such as collecting all the orbs before time runs out, shooting moving targets and even some (very) basic platforming sections. For those who like collectibles there are these hopping robot bugs to find, Decepticon flags to shoot down and spy drones to take out, each rewarding you with new artwork that you can view in the extras gallery. 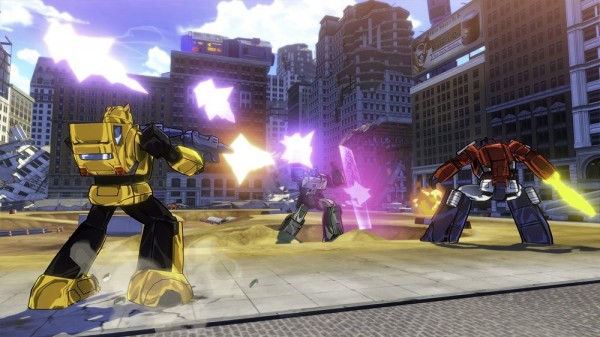 This is pure run and gun action!

There are 5 playable characters in all (as well as additional skins for Optimus, Bumblebee and Sideswipe) which adhere to the same combat basics but are different enough to warrant their inclusion. Optimus Prime is your all rounder, Bumblebee is quick and proficient at range attacks, Sideswipe has a strong focus on speed, Wheeljack is slower and utilises a more defensive play style and Grimlock is strong and bulky but the slowest of the group by far and doesn’t have much range potential. Of course each character also has their own unique look, personality and feel easily allowing for a player to pick their favourite based on their play style or just simply who they like the most.

To compliment the magnificent combat, Platinum Games has packed in some fun RPG elements to improve the experience. Defeating enemies and smashing containers reward you with Credits. These Credits can be used towards leveling up an Autobots stats, synthesizing new weapons or forging new T.E.C.H which you can equip to the Autobots to give them unique abilities such as more attack, faster gauge charging, automatic health regen and so on. 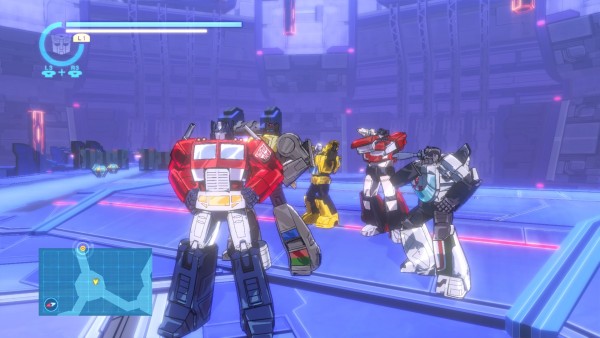 The gangs all here!

If you’ve ever played Darksiders II then the weapon synthesis system here is basically the same. You feed one item to another to power up the first weapon while sacrificing the second. Sacrificed weapons can pass on their abilities and a weapon can have up to 5 slots depending on it’s rank, allowing players to craft a weapon which may raise the rare item drop rate, have a higher chance to land a critical hit, etc. Weapons can also level up in this way to have more raw power and in the case of range weapons, more energy (ammo).

Unfortunately the game doesn’t do a great job at explaining any of these facets in detail, leaving it to tips on the game over screen to explain what stats like CBF mean. Luckily we live in the digital age (where it’s still quite hard to get a definitive answer on what these stats do) but it still would have been nice to have an in game explanation on what these stats mean or what the abilities on a weapon are without first having to select which ability you are going to ditch first because a weapon’s ability slots are maxed out. 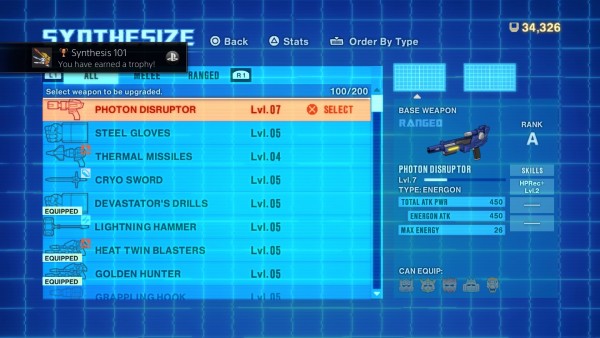 Just as excellent as the gameplay are the visuals, with a bright, gorgeous cel shading style that makes the characters look better than they did in the original material. Not only does the game look great, it runs at 60 FPS in all versions and in 1080P on PC’s and the newest consoles. During my time with the PS4 version I experienced no slow down no matter how many enemies or special effects were on screen. For some reason cutscenes seem to take a bit of a frame rate hit, but it seems to be an intentional move.

The presentation of the combat is superb. Every missile that hits its target or punch landed feels impactful, looks flashy and is a joy to watch. Special shout out to the person that implemented the slow down effect whenever you complete a mission and your results are shown. Finishing an enemy with a slow motion energon sword slash or a flaming hammer downward thrust is nothing but awe-inspiring. 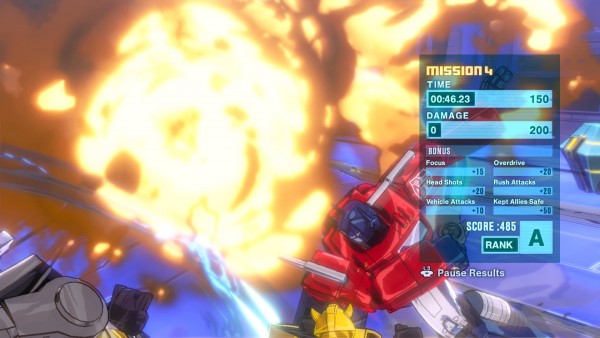 This screenshot doesn’t do the epicness justice!

The audio here really nails that old school vibe and is right on par with the visuals in terms of quality. The soundtrack is full of guitar shredding goodness, the perfect backing track for a fast paced action title based on an 80’s cartoon. Nearly every original voice actor reprises their roles from the cartoon and still sound fantastic, matching up perfectly with their onscreen robot counterparts.

Not only does the combat look awesome but it sounds awesome too, from missiles firing to the cool sound that happens when you enter slow down mode thanks to a well timed dodge, the sound effects are loud, meaningful and make the combat that much sweeter. 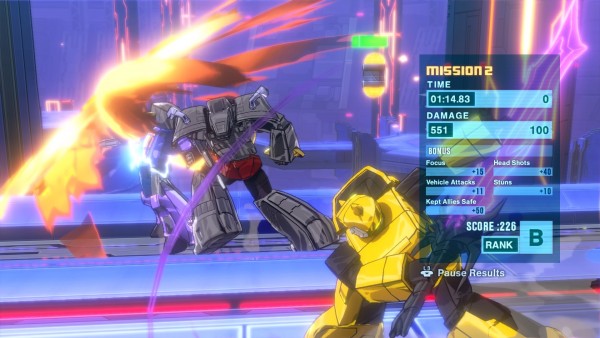 Combat sounds as good as it looks!

Transformers Devastation story is short and mediocre, the level and mission design isn’t the greatest and the game doesn’t do the best job at explaining most of it’s mechanics, but all that is forgiven when you are thrown into one of the most fun action combat systems I have ever had the joy of playing. Add in the fun and meaningful RPG elements and excellent presentation and you have one of the most lovingly crafted Transformers titles of all time. If you’re a Transformers Generation 1 fan you will love this, if you’re an action fan you will love this and if you’re a fan of both then I don’t even know why you haven’t bought the game yet. For everyone else, this is a very solid title that you should definitely try out if action games interest you at all especially at it’s more welcoming price point.