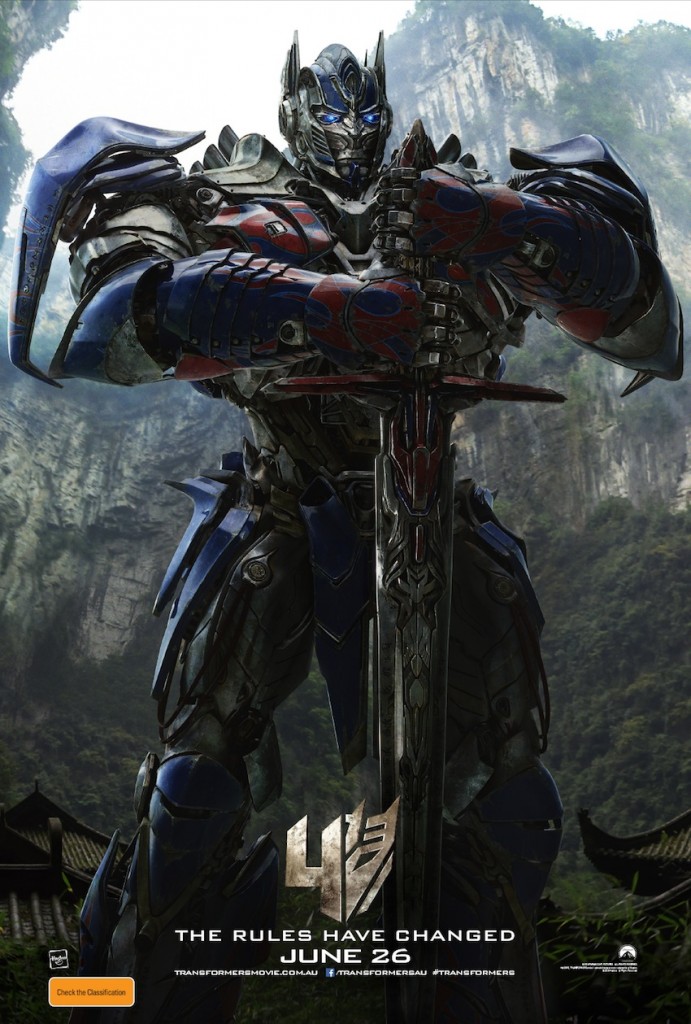 The beginning of a new, as-of-yet unconfirmed, trilogy, Transformers: Age of Extinction marks the return of director Michael Bay after a brief, yet committed absence from the franchise for all of six months. Although he intended to cease association after Transformers: Dark of the Moon, Bay signed back on after studio heads heeded his opinion that the franchise would suffer from viewer fatigue and disinterest with the same old characters, and granted his wishes for a fresh cast and take on the storyline moving forward. You may not like him, but you’ve got to respect the man; he knows how to make money and do business. Now, the question is, did the changes he championed make for a good film?… 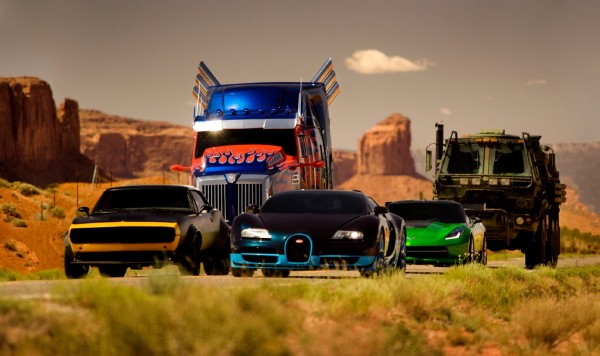 Transformers: Age of Extinction takes place four years after the events of Transformers: Dark of the Moon, when the city of Chicago was devastated by the conflict with Sentinel, Megatron and his Decepticon forces. Introduced at the outset are the main human protagonists in Cade Yeager (Mark Wahlberg), an engineer who fancies himself a genius inventor of what are actually crude robotics, his daughter Tessa (Nicola Peltz), who regards herself the mature one of the two, and T.J. Miller as Lucas, an employee of Cade’s workshop who considers himself virtually a member of the family, and at one point proclaims to Tessa “I’m practically your uncle”. As you may tell by that line, he is the comic relief of the picture, at least for the first hour. Cade is the classic overprotective dad, and though Tessa plays damsel in distress for a portion of the movie, she doesn’t represent that aggravating trope on a whole, getting into the action in a pivotal moment in the final act and also, expressing some wise-for-her-age opinions. At the same time, she is a 17 year old teenager whose “shorts are getting shorter by the second” and looks forward to getting drunk with her girlfriends. 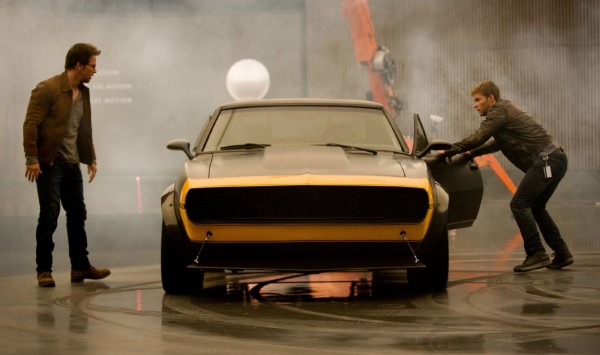 Cade is responsible for the duo’s lack of steady income with his hobby-like work and constant spending on junk just so that he can fix it. One day, he stumbles upon a Marmon 97′ semi truck hidden away in the front of an old theatre, the owner of which is selling some items when not making tongue-in-cheek, self-aware jokes about lazy sequels and digital vs film. Pressuring Lucas to give him $250 to pay for it, Cade tows it home to his barn; a decision that changes their lives forever. Discovering it to actually be an injured Optimus Prime, Cade removes a missile lodged in the engine and is clued in by the Autobot leader about a hunt for all his remaining compadres. Hoping for a cash payment, Lucas had taken it upon himself to call the government number posted on ads all over town, requesting civilians give up the location of any known “Transformers”. Soon, agent Savoy (Titus Welliver) and an all-black autocade of personnel arrive, attempting to intimidate Cade into divulging the whereabouts of Optimus, before physically handling and threatening his daughter. Optimus busts out, allowing the three to escape down the property where a racer named Shane (Jack Raynor) launches into the fray; the getaway driver who happens to be Tessa’s boyfriend…a revelation that Cade is furious about, naturally. 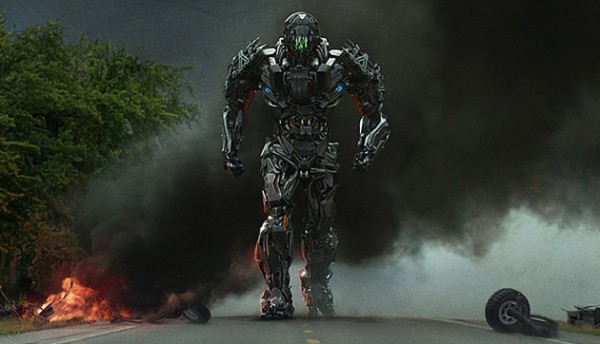 The Terminator-esque bad-ass that is Lockdown

Yes, there are numerous cliche interactions between the afore-detailed archetypes, but overall, these human characters are not nearly as annoying as they should, by all rights, be – it helps when you cast someone with actual charisma and acting chops like Mark Wahlberg. Nicola Peltz does a great job herself, coming off of a major role in TV series Bates Motel. On the villains’ side, Welliver is reliable as ever (evil suits him perfectly) and Kelsey Grammer, who pulls the strings on the operation to dismantle all living Cybertronians on Earth as Harold Attinger, is a welcome, credible addition. The U.S. government isn’t all bad though, and this antagonistic section were not actually the hunter Optimus referred to; that would be Lockdown (Mark Ryan), a intergalactic bounty hunter who has commandeered a Cybertronian “Nightship”. Optimus rallies what is remaining of the Autobots in samurai Drift (Ken Watanabe), Hound (John Goodman), Crosshairs (John DiMaggio) and of course, Bumblebee. Crosshairs is the attitude-filled rebel of the bunch, with Drift deserving significantly more screen time than he gets, while Hound is very vocal and spotlighted in a long shootout displaying his expertise with many types of artillery. 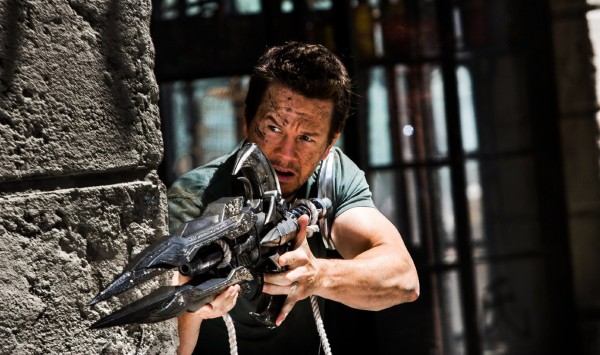 Cade aiding the Autobots with an alien rifle

As if there weren’t enough enemies for the good guys, Stanley Tucci’s Joshua Joyce, CEO of tech corporation KSI, has discovered a newly recognised Earth metal he names “transformium” – “it’s what they’re made of” – and has begun creating Transformers of his own. His motives are all related to making money, and doing business with the government is the best way to do so. The film is darker in tone, with a human death and a jaded, pissed off Prime, but there are funny scenes throughout too, one of which sees Bumblebee chucking a hissy fit after being insulted by the creation of his apparently superior counterpart at KSI. The narrative moves to China, ostensibly a plot point that was written in to appeal to the Chinese market, garnering their official support (the first Western film to have it) and negotiating investment that stipulated the incorporation of local actors and product placement. BingBing Li’s casting is a perfect example of this pandering. It’s extremely obvious but, all things considered, well integrated into the script. At the end of the day, this is another Transformers movie, so you know what you’re getting to a large degree…maybe the quality is simply higher this go around. The most intriguing outcome is the concept of Cybertronians’ “creators” as Lockdown calls them (used in a TV spot)…could they be the Quintessons? 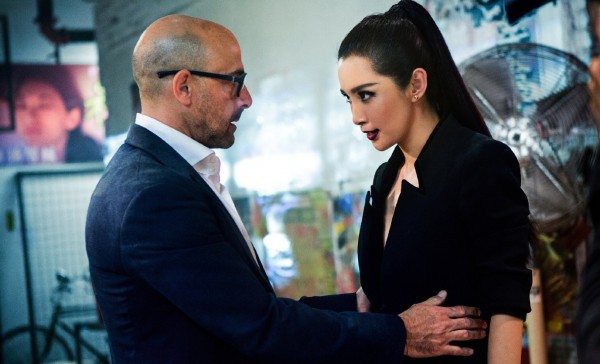 The expert, special effects wizards at Industrial Light & Magic (ILM) have been considered, alongside Weta Digital, the kings of motion picture CGI. With their mastery on display in the Star Wars prequel trilogy, and Iron Man (2008), it was Transformers (2009) that blew people’s minds. It takes countless hours to generate and render even one frame of on-screen CGI goodness, but what’s truly remarkable is the fact that these artists are animating and creating robots consisting of thousands of parts; Optimus alone contains over 10,000 parts. Fun fact: if only one machine were used to render Transformers: Dark of the Moon, it would have taken 22.8 years to complete! The ‘Driller’ from that third entry was an immense undertaking, made up of 70,051 parts and taking 288 hours per frame to render, so for fans to expect something larger and more ambitious is almost entirely unfair, but inevitable all the same – ILM employees seem to be quite the sado-masochists. Though those numbers weren’t surpassed in Transformers: Age of Extinction, it doesn’t mean the film was devoid of visually stunning and impressive sequences and elements that we haven’t witnessed before. 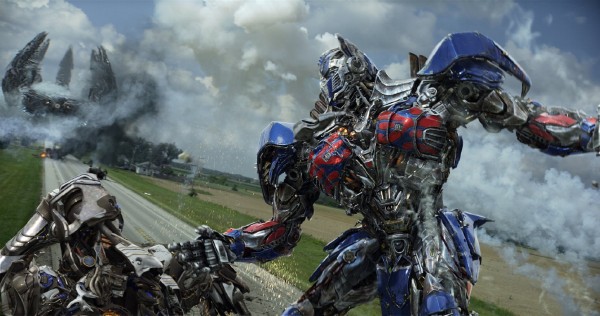 Oh, I forgot about Galvatron! His set-up is important for future releases…mega-important, you could say.

On a smaller note, the Dinobots’ initial transformations from Primary Mode (humanoid) to Alternate Mode (dinosaur) are glorious, partly by virtue of their sheer scale, but mainly because they are unique; their tails form as their abdomens and heads spin forward, and, putting it colloquially…it just looks cool! Speaking of transformations, the method by which KSI’s prototypes do so is the other neat visual element, as they dematerialise into the amorphous “transformium” that comprises them, and then rematerialise into their desired form, maintaining their momentum in forward movement, but also able to weave around objects and travel further in the process. Appreciated is the controlled, supplementary use of 3D and cleaner, well-choreographed and framed fight scenes between the robots, which has been an issue in the past…although the pace of many battles is just as fast, if not more than those in previous installments. Viewers shouldn’t have concerns about the voice acting with series veterans Peter Cullen and Frank Welker – Optimus and Galvatron respectively – along with the rest of the V.O. cast delivering. The only notably ill-fitting implementation of music of any kind is the rare, intermittent and forced use of Imagine Dragons’ original track ‘Battle Cry’. 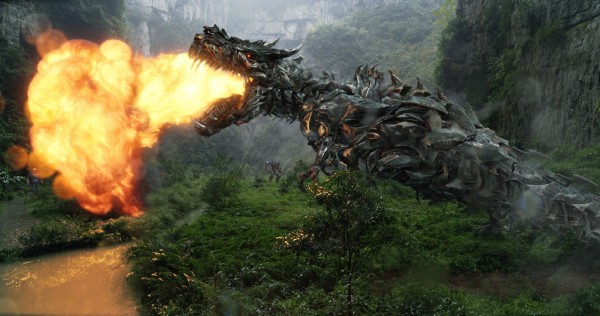 Transformers: Age of Extinction might very well be the best entry yet, although how much weight that statement holds when looking at its predecessors is dubious. Personally, it held my attention much more successfully than the last two films, which is surprising considering it has the longest run-time of them all. That being said, it could have done with a slight trim of about 10-15 minutes as there were some human filler moments, which is to be expected. Fortunately, Wahlberg and co. do a more admirable and palatable job than the prior trilogy’s principal cast, and the humour that he and Tucci delivers actually works, probably due to their further-honed improvisational savvy. The action is just as bombastic, and though the Dinobots’ inclusion comes late, fans will certainly get a kick out of their involvement. The events of the film also takes the franchise in a new direction with the origin story twist that foreshadows a continuation likely based on the original G1 narrative. Either way, none of the other Transformers movies have produced this amount of speculation and anticipation for where we are headed next…I’m actually excited for a Transformers movie!