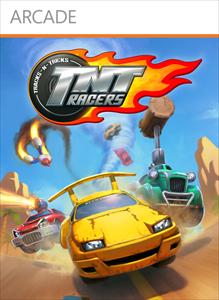 These days, a $10.00 game can bring you the same experience that a $40.00 game used too.  We also have begun to expect that these smaller prices should give us a great experience.  And why not? This is the future.  A future where devices are miniaturized, but they cost less to produce.  A future where consumers, creators and companies can work together to set the most reasonable and competitive prices.

TNT Racers blasts into this futuristic world with a price that is steadily becoming endangered.  Yup, it is only 800 Microsoft Points.  But with a price so low, does it bring an experience that rivals its competitors on the Xbox Live Arcade Marketplace? 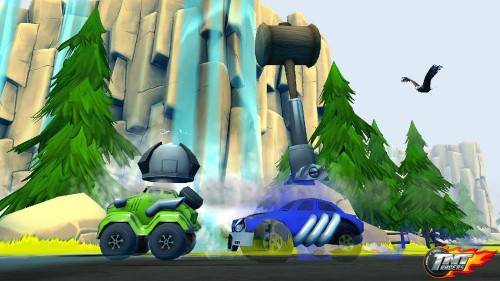 TNT Racers is a racing game where you collect power ups and try to ram the other opponents off the screen. You play as a tiny car that must fight for the win.  To accomplish this, there are a variety off weapons to use.  For example, you can use giant hammers to cripple other cars.  Or, catch the other cars up in a whirling tornado.  Electrical stunning is another way to disable your enemies.  It is really fun to use all these different powers.  The sheer creativity of the varying artillery at my disposal made it all the more awesome to blow up the artificial intelligence.  However, although there are quite a few weapons to go around, these weapons were very hard utilize due to control issues and some other problems.

The game’s camera angle is situated in a top down view, and thus it is very difficult to accurately control your mini cars.  Endlessly jamming my analog sticks around, I was immensely frustrated with how little control I felt that I had over my ride.  I would normally praise a game for having a lot of different track surfaces.  But with TNT Racers, I struggled to merely keep the car on the marked road.  Avoiding the countless puddles and mud was an impossible mission, especially when the other racers are also firing all the weapons they can.

This camera also caused other complications.  Because the the action is so far away, it takes away some of the excitement that the game could have had.  Using the collectibles is still fun, but when you can barely see what is happening below, it is nearly pointless.  Aiming these weapons is also a pain, even when the game uses the auto targeting system (the system still needs your input to work, but once you get close enough, the aiming usually takes care of itself).  Getting the game to recognize your input is rough though.  I had issues finding my car since there was so much going on.  Locating other cars and firing them on them accurately was annoyingly messy.  All in all, the cars were just dwarfed by the larger backgrounds and the camera angle made them seem even smaller. 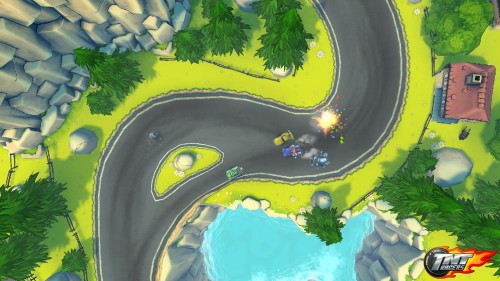 One weird part about the game that I noticed was just how much of a distinction there was between the backgrounds and cars. Let me explain further.  The backgrounds and environments were extremely detailed and charming.  A ton of different styles were exhibited.  From icy oceans to Egyptian deserts, all of them were nice to look at. This was probably one of my favorite parts of the game, and it made me want to keep going when the other parts of the game got on my nerves.  I wanted to find out what other kind of artistic touches the developers had put into the tracks.  However, although the places you are driving through are magnificent, the cars are bland.  Being so small, they get lost in the massive tracks.  Just a few different color options are available to paint them too. I don’t know why, but this inequality separating the automobiles and racing locales seemed odd.

There are some interesting car designs though.  Take as an example, the UFO car, which sounds exactly like what it is.  Sports cars and trucks are featured as well.  Even little compacts are an option.  Nonetheless, the designs of the vehicles do not seem to matter.  No matter how cool they look, there are no speed or power differences between any of them. Therefore, your only reason to choose one over the other would be based on the psychological eye candy appeal of each transport. 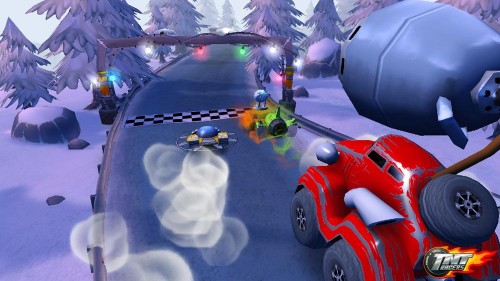 It is not all doom and gloom however.  The points I mentioned above are true, but they don’t quite destroy all the game’s potential. It is still a awesome to blow up the other competitors.  Destroying the others is not the only option in the game though.  There are many other game modes included.  As an example, you can practice your traffic cone avoidance skills (more fun than it sounds) or you can run over as many cacti as possible in a given time.  Shadow mode also allows you to respawn, even if you fail.  So, although your just a ‘shadow’ of your former self, you can still wreak havoc even if you died. Its too bad that you have to unlock one race at a time though.  If you get stuck, you can only keep trying, unless you want to move to the harder tier and try your luck there.

Multi-player in the game holds a rare treat.  Split screen play has been added! What what! I really appreciated this feature, even if I did not actually try it.  It is good to see some developers still implement this in their games.  But, as with all games, online is where its at.  Unfortunately, I could find no other gamers to play with.  That is weird too, because there were clearly many players ranked in the leader boards.  This was a real disappointment, as I really wanted to try my killing/racing skills in the online world.  Also, a  good percentage of the achievements are centered around the online playing field.  It appears as though most people will be unable to unlock them.

Finally, you can also create your own custom racing games.  You can make tournaments or single race events.  Pick your favorite modes and tracks and add them in.  Now you have a party! 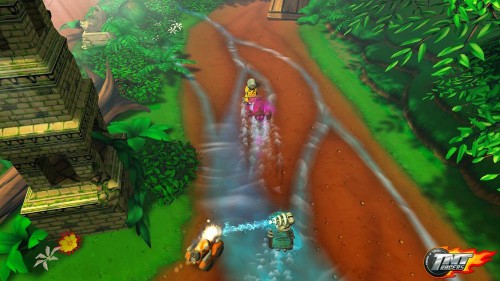 Another sweet morsel of goodness in the game is the soundtrack.  The music is delightful.  Cartoony in nature, it will put a smile on your face.  Featuring trumpets and some drum beats, it transcends the game’s explosion happy gameplay and reminds me of Saturday morning cartoons.  Although repetitive in nature, it is still a good backdrop of audio goodness.

In conclusion, TNT Racers tries to go down the same racing path that many of its predecessors have raced down.  Games like Mario Kart and Blur.  While these games were full of in your face action, TNT Racers almost makes racing feel like an exhausting chore. Flimsy controls and far away action meant that I was constantly trying to just keep up with the others.  Even just trying to find the one car that I was controlling was sometimes a difficult task to accomplish.  However, some pretty great power ups do make the racing worthwhile.  Add in the cheap price tag, and this game is a nice deal.  Nevertheless, you may want to check out the demo before you lay down your converted cash.