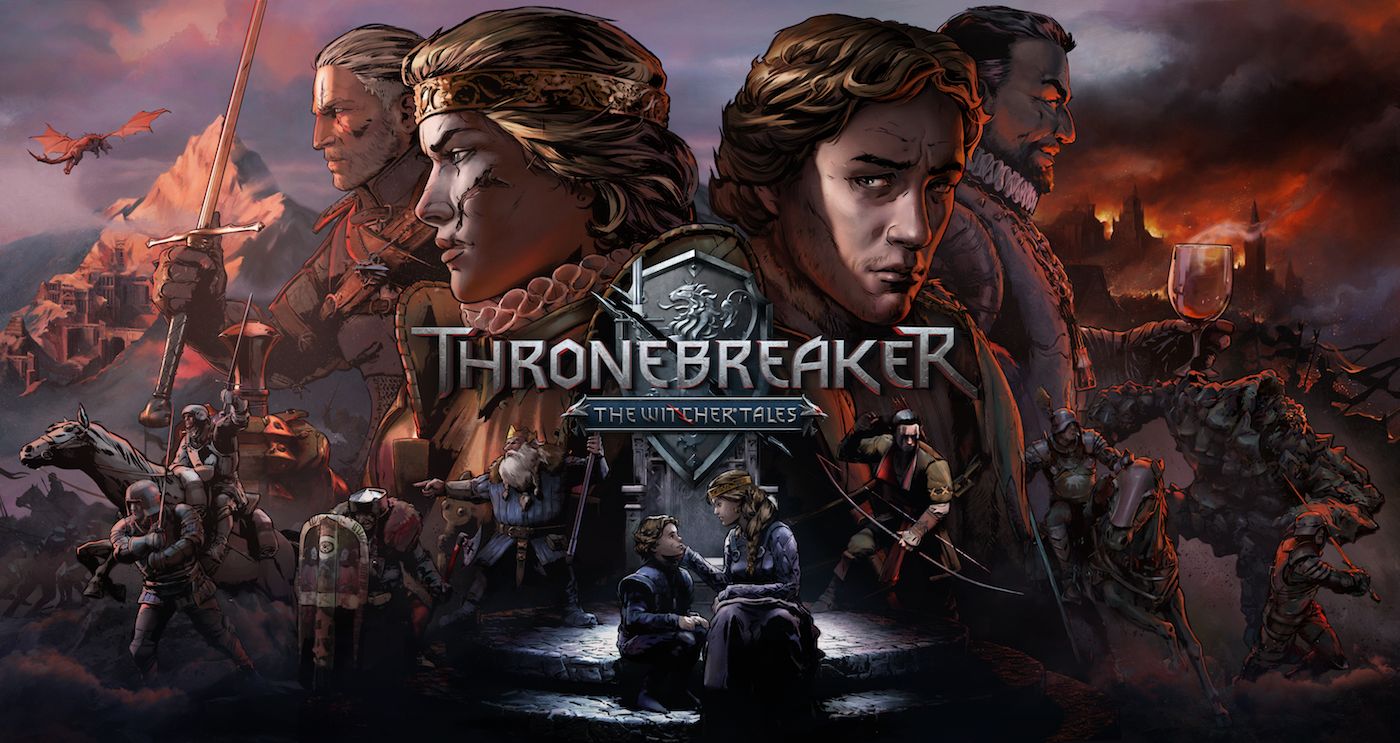 Starting its life as a singleplayer campaign for GWENT, Thronebreaker: The Witcher Tales has been spun out to be a full-blown adventure RPG using GWENT for combat. Players will assemble their army to repel the Nilfgaardian invasion as they travel through Lyria and Rivia. Using the newly revamped rules introduced with GWENT’s Homecoming update, Thronebreaker: The Witcher Tales will challenge players with standard battles, puzzles, and special scenarios.

Thronebreaker follows the adventures of Meve, Queen of Lyria and Rivia. With the Nilfgaardian army marching through her realm, Meve must bolster her army to repel the invaders and avenge her slaughtered subjects. 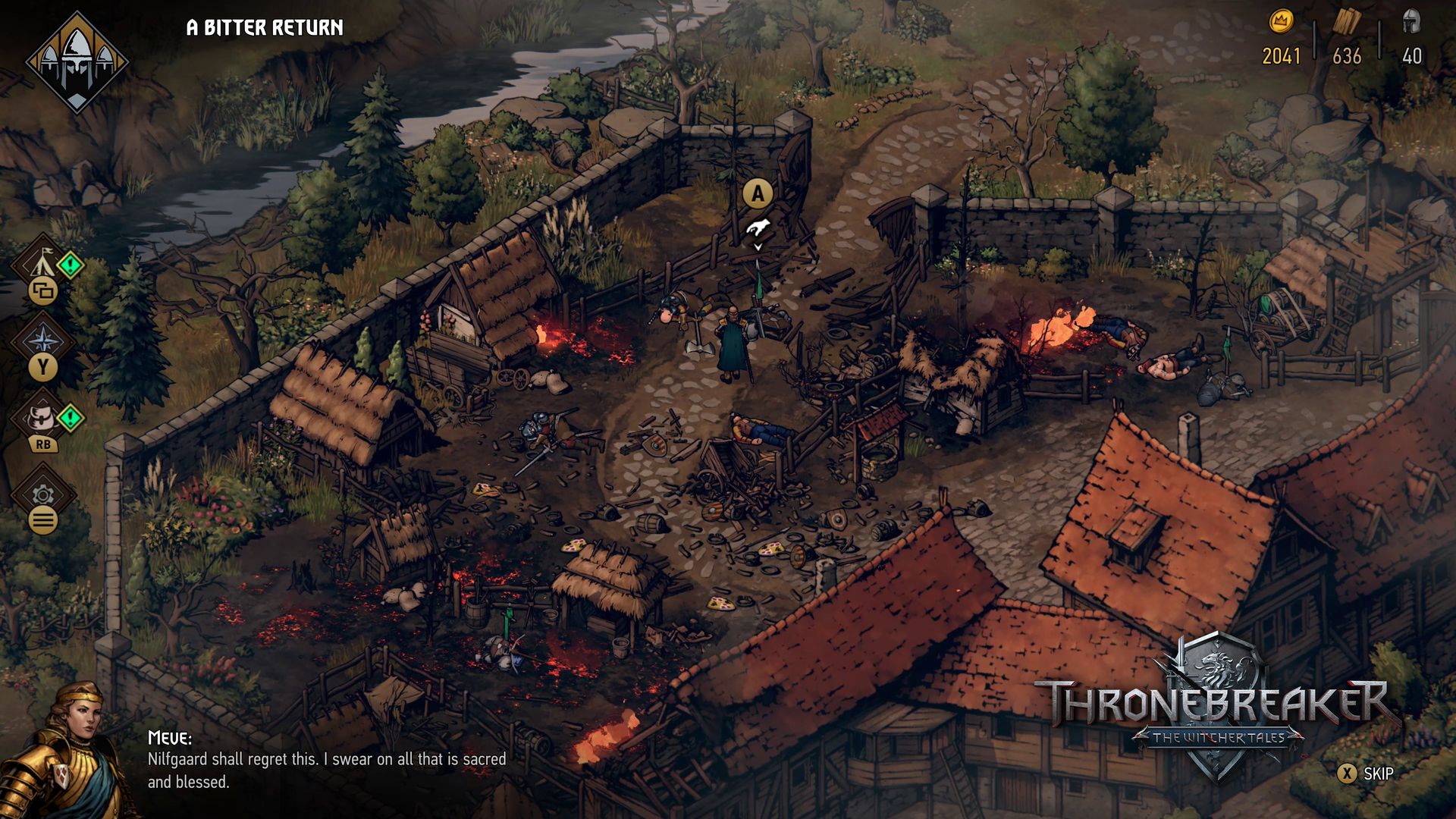 The story is an adult tale, with plenty of violence and difficult decisions. Meve’s tale is not a Disney princess story. Many times, players are faced with tests of leadership where there are no happy endings or right answers. Even so, players are given plenty of options to rule Lyria and Rivia as a fair and righteous monarch, an evil tyrant, or somewhere in between. The writing is generally solid. The story is accessible to gamers who have yet to play The Witcher RPGs since the emphasis is on the larger military and political forces at play, which fits perfectly with GWENT’s premise of emulating battles between armies.

Thronebreaker: The Witcher Tales is split between the adventure gameplay in the overworld and GWENT trading card game during combat. The adventure section is a simple point and click-type affair where players travel around the map interacting with locals, looting materials, finding quests, and getting into fights. I found the adventure portion to be rather dull as the world feels a bit empty. While there are a lot of battles and puzzles to get involved with, there are also large dead spaces where players are mostly hoping for an ambush and collecting loot.

Combat is where Thronebreaker really shines as players are essentially playing GWENT against the AI. GWENT is a solid card game. It is a breath of fresh air in a space that is often dominated by Magic the Gathering type games and its variants. Players take turn playing cards in their hand to either the ranged or melee rows. The winner of the round is the player with the most combined power of all their cards in play. At the end of the round, cards are cleared from the play space, three more cards are added to the hand, and a new round begins. GWENT’s complexity comes from the various card and player abilities, plus strategic decisions based on the game’s best out of three rule set. Games are won and lost by beating opponents with the least amount of cards played, and sometimes throwing a round is the best way to win.

In addition to the usual three round matches, Thronebreaker: The Witcher Tales offers a variety of scenarios and puzzles to complete. Scenarios are usually one round matches against an AI who already has some cards in play to reflect the circumstances of the story. Puzzles are even shorter challenges that gives players a specific set of cards that must be played in a certain order to complete the puzzle’s objectives. While the game’s tutorial is rather short, these scenarios and puzzles are an excellent way of easing newbies into the finer points of the game. 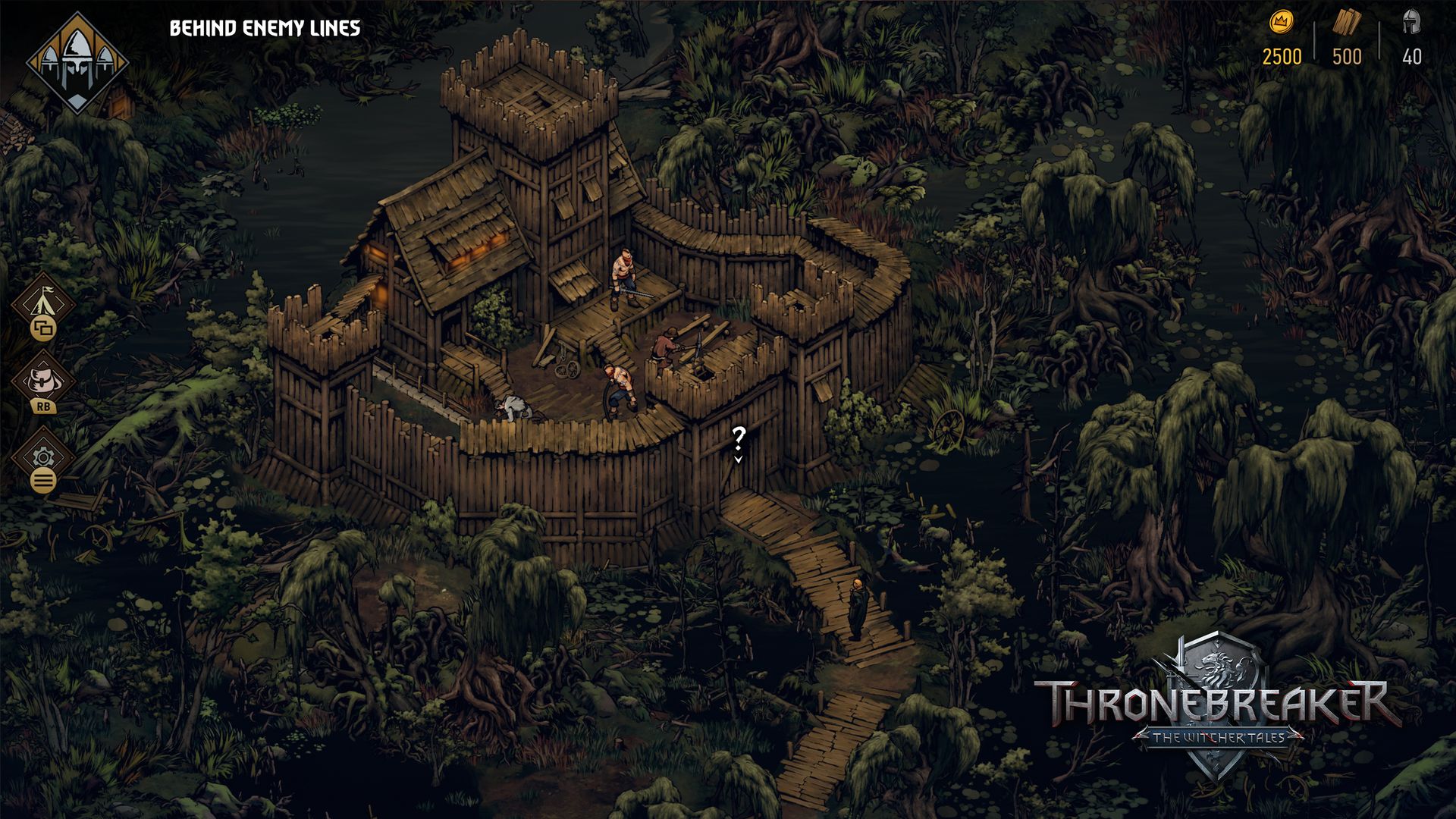 The difficulty level is decent. The game offers three levels of difficulty, and the AI puts up a decent fight. The game’s learning curve is short as GWENT is one of those easy to learn, difficult to master type games. The difficulty ramps up at a reasonable rate. The difficulty of the puzzles are hit and miss, as one puzzle solution may be incredibly obvious to a new players while the puzzle three steps away requires in-depth knowledge of the game mechanics to solve.

The controls are decent. Players can move around the map by either clicking where they want to go or holding down the mouse button to send Meve in a certain direction. While the map looks like it is composed of open areas, players are generally limited to roads and pre-set zones. The pathing for the single click seems to have a short range, requiring players to step in at times and manually guide Meve in the right direction. Considering the game is coming out on consoles, I would have preferred to see some sort of option to guide Meve using the keyboard.

In combat, the controls are decent, but could use some extra options. Players need to click on whatever object they want to interact with and then click where they want to target. Sometimes it’s hard to tell when a card has been selected and is ready to be played as the card only sticks out a little from the hand. I would have preferred to see a more obvious aura to make things clearer. I am disappointed that drag and drop controls are not available, as it’s a common control system for trading card games and feels quite natural with the mouse. 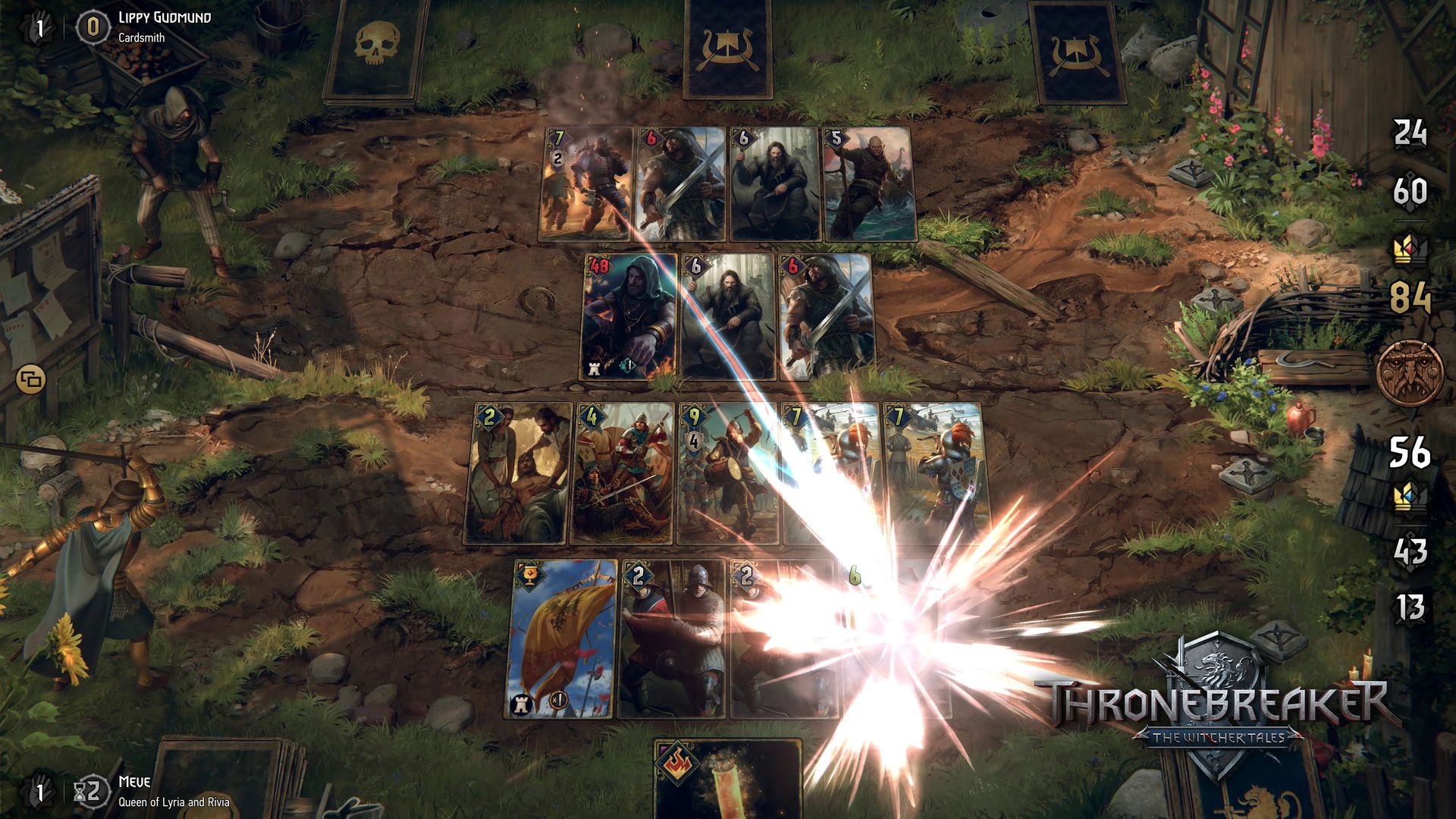 Thronebreaker: The Witcher Tales offers an excellent visual experience. The art style is a complete departure from The Witcher RPG titles, which emphasize realistic graphics. Instead, Thronebreaker opts for a more animated style inspired by the GWENT cards themselves. The style is eye catching, though Meve’s bright gold colouring clashes with the more muted tones at times.

The audio experience in Thronebreaker: The Witcher Tales is excellent. The sound effects work well. The music is subtle and does not distract players in combat. The voice acting is solid throughout, an impressive feat considering the sheer volume of voice acted lines in the game. 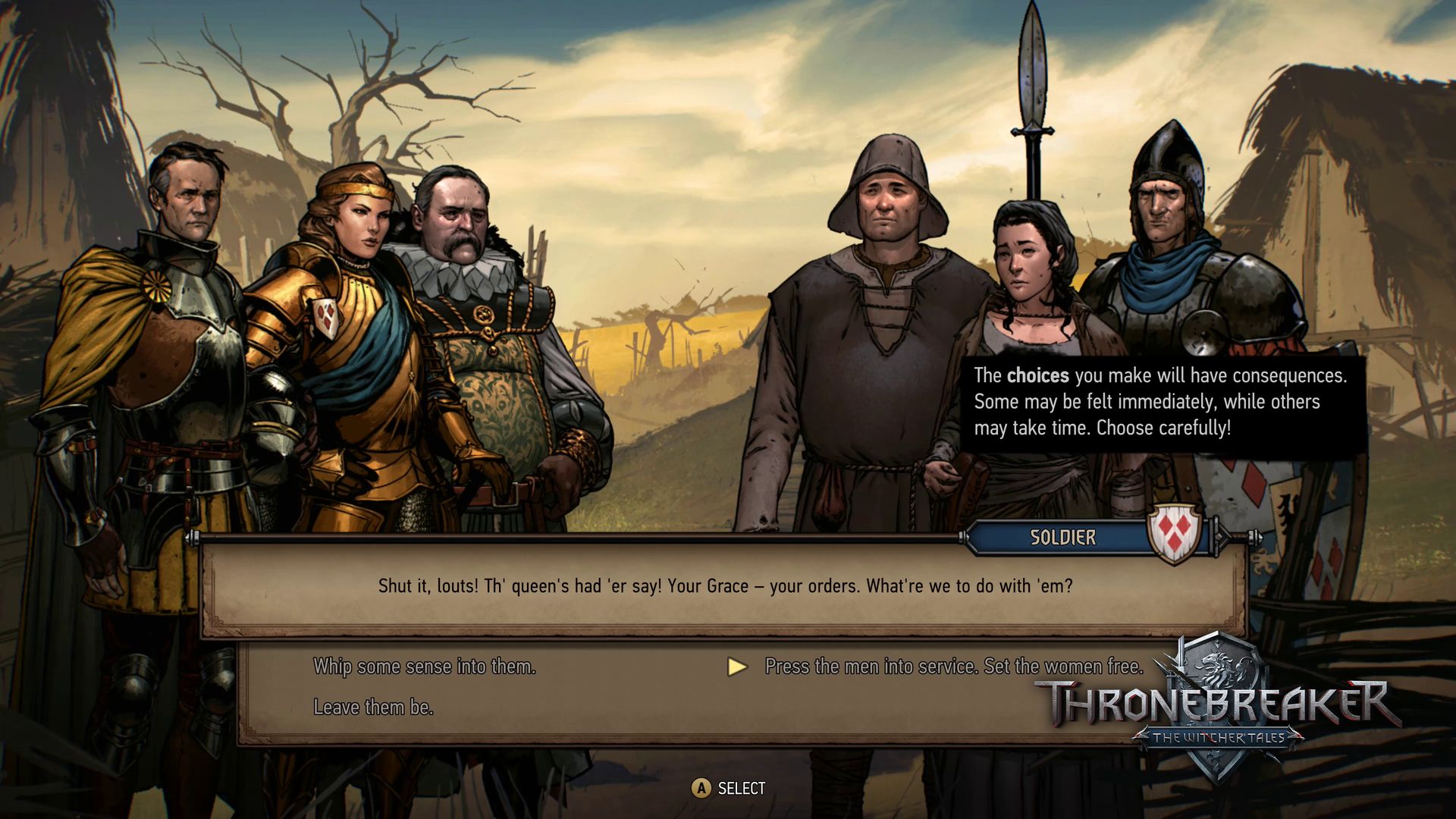 Thronebreaker: The Witcher Tales has a great story to tell with solid voice acting. While the adventure portion of the game may be a little dull, the GWENT gameplay is excellent. Along with traditional matches, Thronebreaker offers some intriguing scenarios and puzzles to keep things fresh. Whether you consider Thronebreaker: The Witcher Tales to be the singleplayer GWENT campaign or its own game outright, the title is a solid way to get into GWENT.

Thronebreaker: The Witcher Tales is a great way to get into GWENT or polish your skills.
8