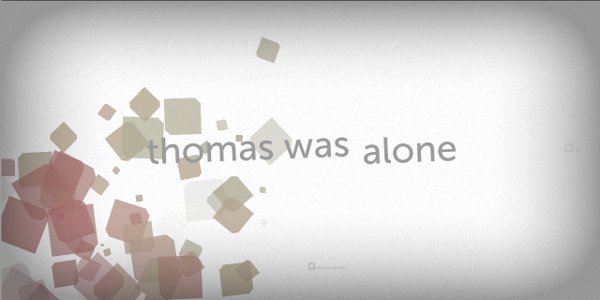 Overview:
Building up from and expanding a game that was made in 24 hours, Thomas Was Alone helms from the mind of developer Mike Bithell.  The original was pretty unique for an internet flash game, to the point that when I first read about this release I still remembered playing the original game myself.  Somewhat short, the original game didn’t dally on spectacular graphics, but instead nice, slightly challenging platforming featuring rectangles trying to reach a specific spot for one on each level.  This time, the expanded full game now has a full narrative story, including voice-over, and more gameplay featuring than simple jumping.  So, just how good is this indie title? 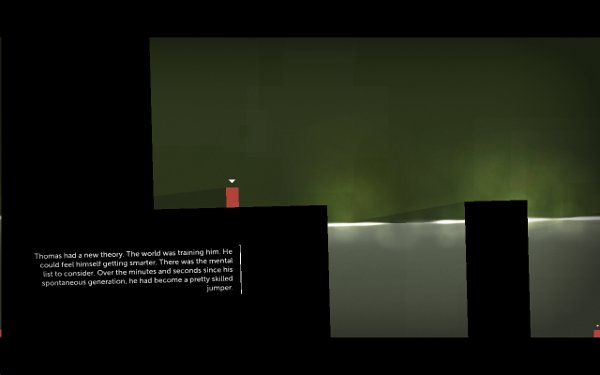 Story:
Thomas Was Alone is the story of simple rectangles moving up and to the right, no wait it’s the story of the events leading to a companies closure, no wait it’s the story of emergent self-aware AI, no wait it’s all of them and more.  Thomas, while being the title character, is by no means the main focus in this three act story.  There is a lot of things going on in the story that aren’t even told through the voice-over work.  The story is a pretty interesting thing, there is more there than is handed to the player, which must be figured out for themselves.  For something that can be taken for a simple platformer there is a lot more going on and that’s what makes it so good. 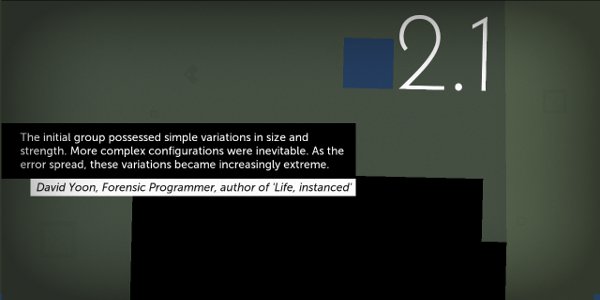 The story starts with just the introduction of Thomas, but continues to build to the character base. All of which have their own little personalities, that while never actually speak for themselves comes out quite well through the narration.  The game really is a three act story, albeit divided into 10 different chapters where several of the chapters form each of the different acts.  The third act, and still trying to avoid spoilers here, is actually pretty interesting and unexpected.  Going in a direction that while still building from the previous act, solidifies the ending of the second act perfectly.  That’s what is so refreshing about the game, a platformer that gives characters to actually care about, even if they are just multicolored little rectangles.

Gameplay:
To be honest, in some ways there is more story to the game than actual gameplay, though this isn’t really a bad thing.  There is still some nice interesting features in the gameplay department.  In the original flash game the only difference between characters was movement speed and jump height, but now there are characters that can float on water, act as trampolines, and break the laws of physics.  The puzzles range in difficult from requiring some decent movement skills, to simply getting characters into the correct positions.  Weighing in at 100 levels, there are a decent amount that revolve only around forwarding the narrative, this isn’t necessarily a bad thing though as the story is one of the best things about the game. 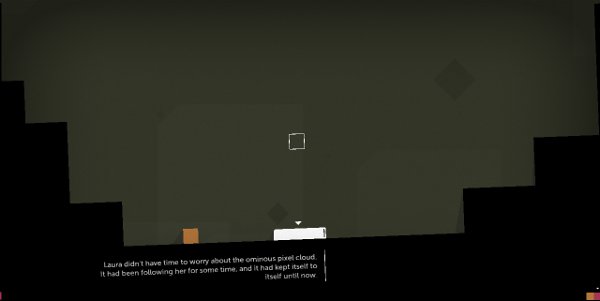 The gameplay does switch gears throughout the different chapters, continually changing things up and adding new characters as well as other aspects of gameplay.  This does keep the game fresh and prevents the player from having to think in the same way from start to finish, so that they have to stay on their mental toes.  The shifts in gameplay are really welcome and keep the game feeling dynamic, it’s not simply having another shape to get to that shaped spot across 100 levels.  Even without the story, some of the levels would give players a good mental jog at figuring out how to use the characters together, though these can be a little far in between.

Audio and Visuals:
Thomas Was Alone doesn’t have much to speak of in terms of visuals, it does look very nice at the highest resolution, though it is much more simple in terms of how things look.  The most diverse thing in the game is a pixel cloud, while the vast majority are just the different shaped rectangles.  Though the visuals of the characters are pretty well thought out as many of the characters stand out in shape alone, but also in nice contrasting colors.  Though I will point out that two of the characters are the exact same shape and while being different colors, these are red and green, so colorblind people of that spectrum may have a harder time with those two, if they didn’t act in completely opposite ways. 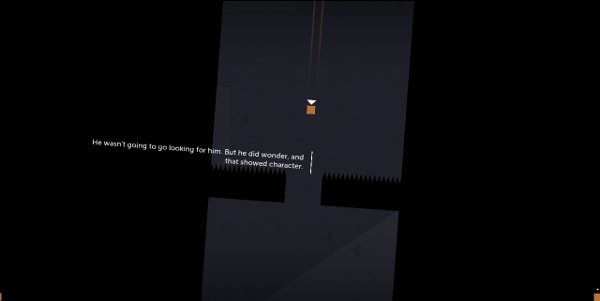 In terms of audio though, this game is of the highest tier.  The music fits the computer-istic setting with its bleeps and wonks and there is plenty of it as well.  The music changes to fit the different tones of the different chapters, which some might not expect in a platformer and even better doesn’t get overly repetitive and on the nerves, with much longer pieces than some other games.  The music isn’t the only thing in audio getting top marks though as the voice-over is one of the most fun I’ve heard in a while.  The narration of Thomas Was Alone features Danny Wallace, an English TV personality, who is probably best known in the gaming world for providing the voice of Shaun Hastings from Assassin’s Creed II.  Danny does an amazing job and adds a lot of charm and humor to the characters through his voice over, but the narration doesn’t simply hinge on humor alone.  There are some pretty low points that the narration doesn’t simply make light of, actually being pretty somber when needed to the point where I cannot think of anyone who could have done a better job with it, as it is one of the main things that makes this game.

Overall:
Thomas Was Alone is one of the best games I’ve played this year, which I’d been dying to play since the trailer.  I was not at all disappointed with not only how the game turned out, but where it went in the game.  The music, narration, and gameplay all meet together to make something amazing.  The game is quirky and fun, but it isn’t all the time having highs and lows, which is what quality story-telling is about.  I give Thomas Was Alone