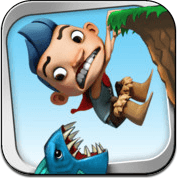 Overview
Although this point has been brought up countless times, the iPhone has allowed many developers to quickly create new games and try out new ideas much faster than conventional methods.  Whereas a huge development team might take 2 years with market tests and  building a world to push out console title, a small development team can quickly think up an idea and publish  it within as little as 3 months on the App Store, where they can receive real feedback from actual customers.  This has spurred the video game industry and created a vast variety of new gameplay types and genres. Nevertheless, for as many good games there are on iOS and Android, there are a plethora of stinkers.

This Could Hurt is a game that would probably have never made it to a console. It is a very simple, slow paced game. However, the ideas and unique gameplay elements deserve to be shared with the world.  Does it deserve your $0.99, or is it better to spend that money on a candy bar? Find out in the following review. 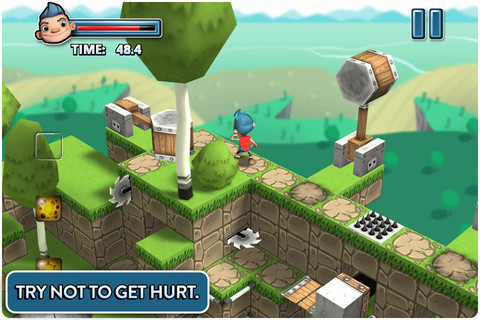 Gameplay
This Could Hurt is a simple puzzle and action game that values patience and thinking more than reflexes. The main character is a young boy who is a member of the Oakguards.  However, being an apprentice, he must pass The Test of Pain to be a full fledged Guardian. All in all, the story makes absolutely no sense and should be completely ignored.

To pass the The Test of Pain, you must maneuver the apprentice through 4 worlds of 10 levels each.  However, you don’t actually have control of the character.  He walks along a predetermined path.  The only element you have control over is when he stops.  Simply tap and hold on the screen, and he will stop.  You must stop before spikes and saw blades, or he will get damaged. If you take enough damage, you will of course die. There are other ways to die too.  You could stop too long on a trap door, and be dropped into an abyss.  Or, some piranhas could jump out the water and munch on your flesh.  The key to avoiding these awful fates is to simply stop, time your move and then let go so as to avoid the dangers.  Its fairly simple.  Even young children could play this game. 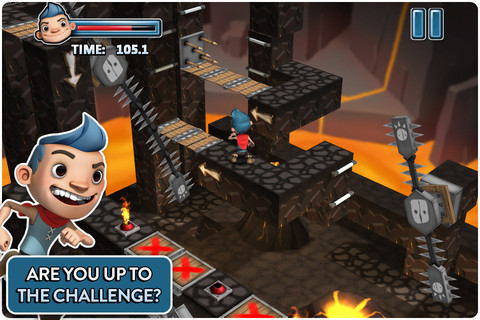 Nevertheless, Orange Agenda did add some complex elements to the game.  As with any puzzle game, the levels will increase in difficulty.  Some levels require you to plan out a few steps ahead.  Or, you have to stop on moving block and then wait as it carries you to another moving block, quickly move and then wait until the moving block gets to solid ground. Only then will you be able to proceed.

Overall, the game can have hard moments, but it is not overly difficult.  In some levels, you can just walk right through without even stopping, although you may get hit a few times. However, to get a perfect score, you will have to have extreme patience.  Or, you can buy power-ups with in-app purchases.  In fact, I believe that it is almost impossible to get a good score on some levels with buying a power-up.  Although you do earn a minimal amount of power-ups for free, the vast majority of the time you will almost be forced to buy one if you feel  you must get a perfect score on a level.  In addition, the hit detection in This Could Hurt is not always accurate.  Sometimes this glitchiness and the annoying Auto Follow camera conspire to hurt you.  Thus, you will be unable to complete a level without timing the moment EXACTLY right, or by buying a power-up. 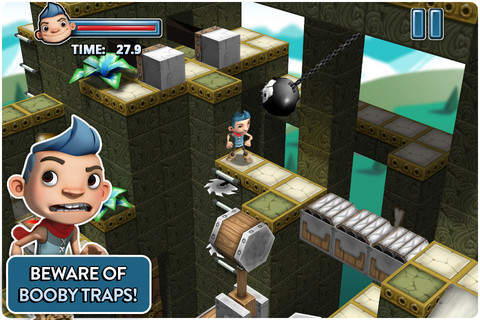 Audio and Graphics
The in-game messages encourage you to turn on the sound, saying that it can help you solve the puzzles. I never found out how this helps, but it is an interesting idea nonetheless.  All in all, I found the audio to be extremely generic and boring.  It literally felt as though the game was trying to put me to sleep by playing a lullaby.

Graphics in the game could be a lot worse, but they also could be a lot better.  Rough edges and inconsistent shadows, especially over pits, dampen the appeal of the game and get in the way of a good time.  Nevertheless, for an iOS game, I can’t get too picky about the quality of the visuals. They are adequte, and they get the job done. In addition, I was pleased to see that the backgrounds have immense variety, and they are very colorful and engaging. 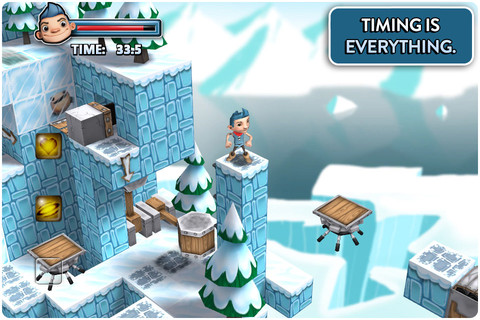 Overall
In conclusion, this game feels rushed.  Most of the in-game messages and tutorials don’t even have proper grammar or spelling.  Although I initially thought the gameplay was compelling and original, it was really dull by the  middle and end of the game.  Plus, there are no checkpoints. So if you fail in the middle of a long level, you have to go back to the beginning of the level.  The in-app purchases feel severely unbalanced as well.  Although I applaud these developers for taking on this new gameplay concept, I wish they could have spent a lot more time on it.  Maybe those longer development cycles have a place in the games industry after all.

Then again, if you are anxious to try out a new puzzle game on your iPhone, or if you simply want a game that makes you think, This Could Hurt won’t kill you.