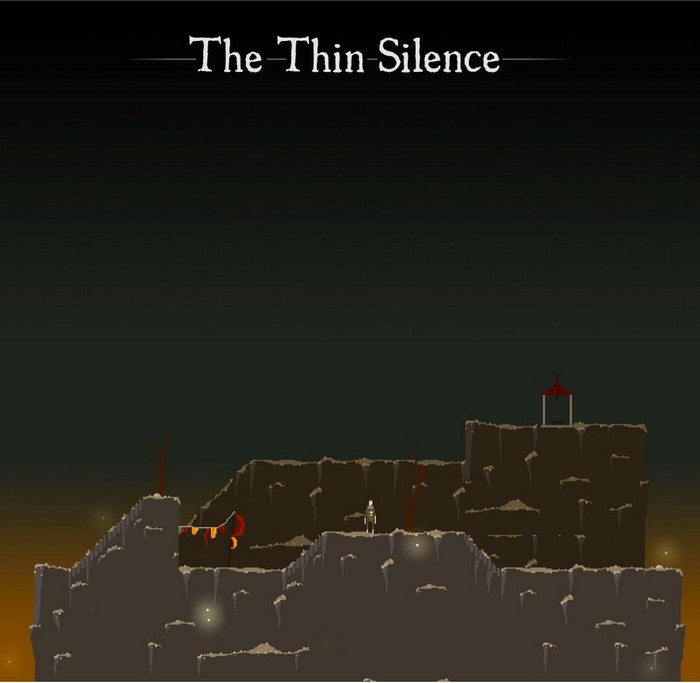 As someone battling depression for more than a decade, I’m strongly skeptical whenever I encounter games covering that topic. Mostly because they’re usually made by creators who have poor or zero understanding of how depression actually works. That often leads to an inaccurate or simplified depiction of it which only results in (despite good intentions) more misconceptions. So I usually completely write it off knowing it will likely make me upset and disappointed. Being personally invested in it, my view on it is “either do it right or don’t”.  With that said, every once in a while a game appears where its art style or description makes me cautiously optimistic. That is why I decided to give The Thin Silence a chance.

On the surface, The Thin Silence is a narrative puzzle adventure following the path and recollections of Ezra Westmark. Not much will be revealed at first since the game gives you the bare minimum of information. There are some hints from scattered notes of a civil war and the immense guilt Ezra feels due to the events he experienced. Anything more will be revealed by progressing through the levels while solving puzzles, hacking terminals and crafting useful tools to help you on your way up. Going higher and higher is our goal since the game finds us starting at a rock bottom – literally. It is a pretty clear allusion to depression, starting from the absolute low (aka mine shaft in the game) and slowly climbing up while learning more about yourself. 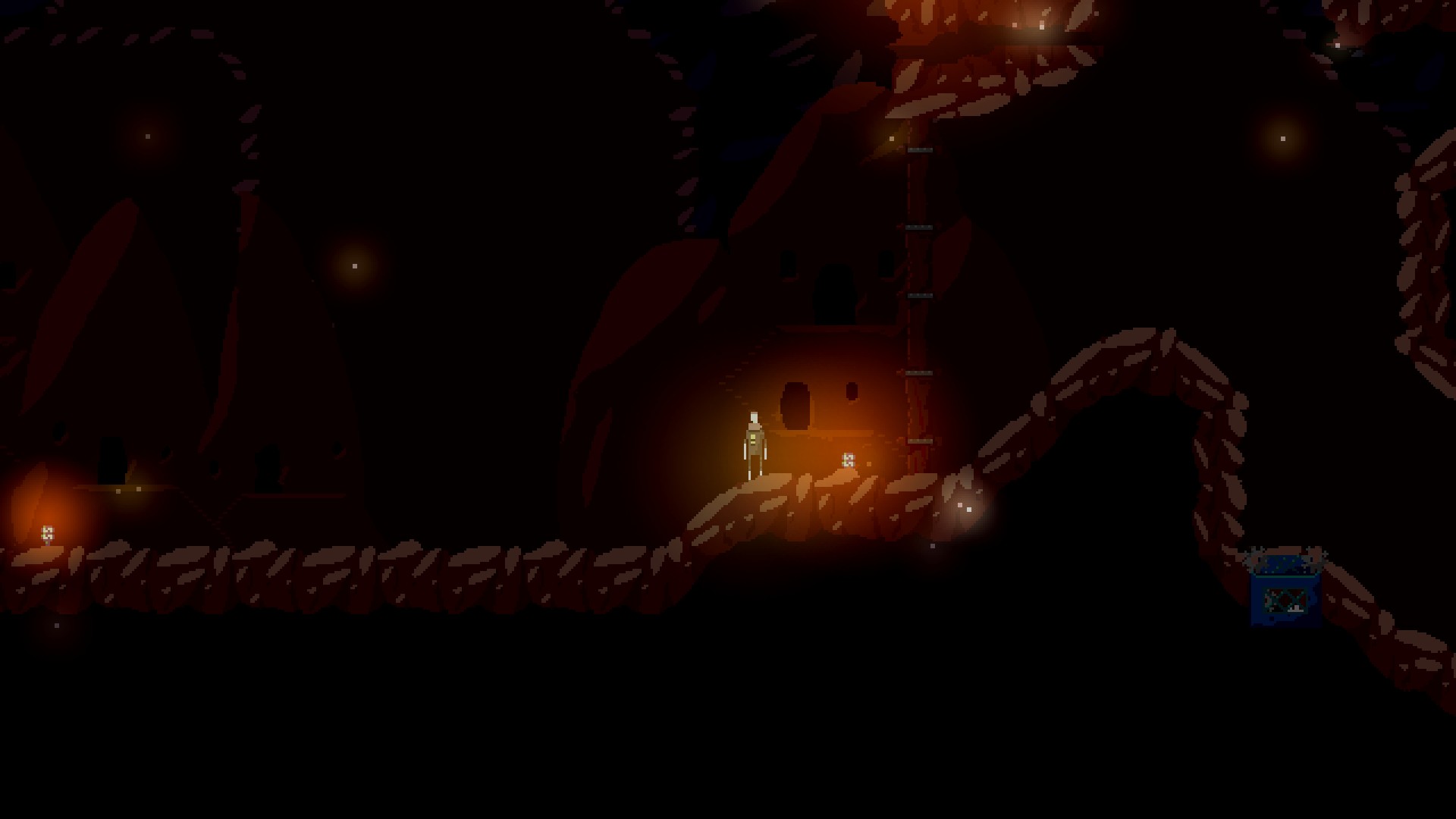 Occasionally, you find various gadgets on the ground that can be used independently or combined with other gadgets to create a new item. For example, combining hook with boots you found earlier will result in climbing boots. The puzzles start fairly simple, climb up to pull a lever or push some crates to progress to the next area. Later on, with the addition of new gadgets, the size of levels expands as well. It is also after such expansion of levels that I noticed the game is missing any sort of run or spring button. Ezra has only one walking speed and the sluggishness of it is easily noticed in the larger areas or especially when you have to redo a section. Yes, you can mess up some puzzles (or die even) which is why the developers added a handy reset button. Holding it will place you at the start of an area/puzzle until you get it right. 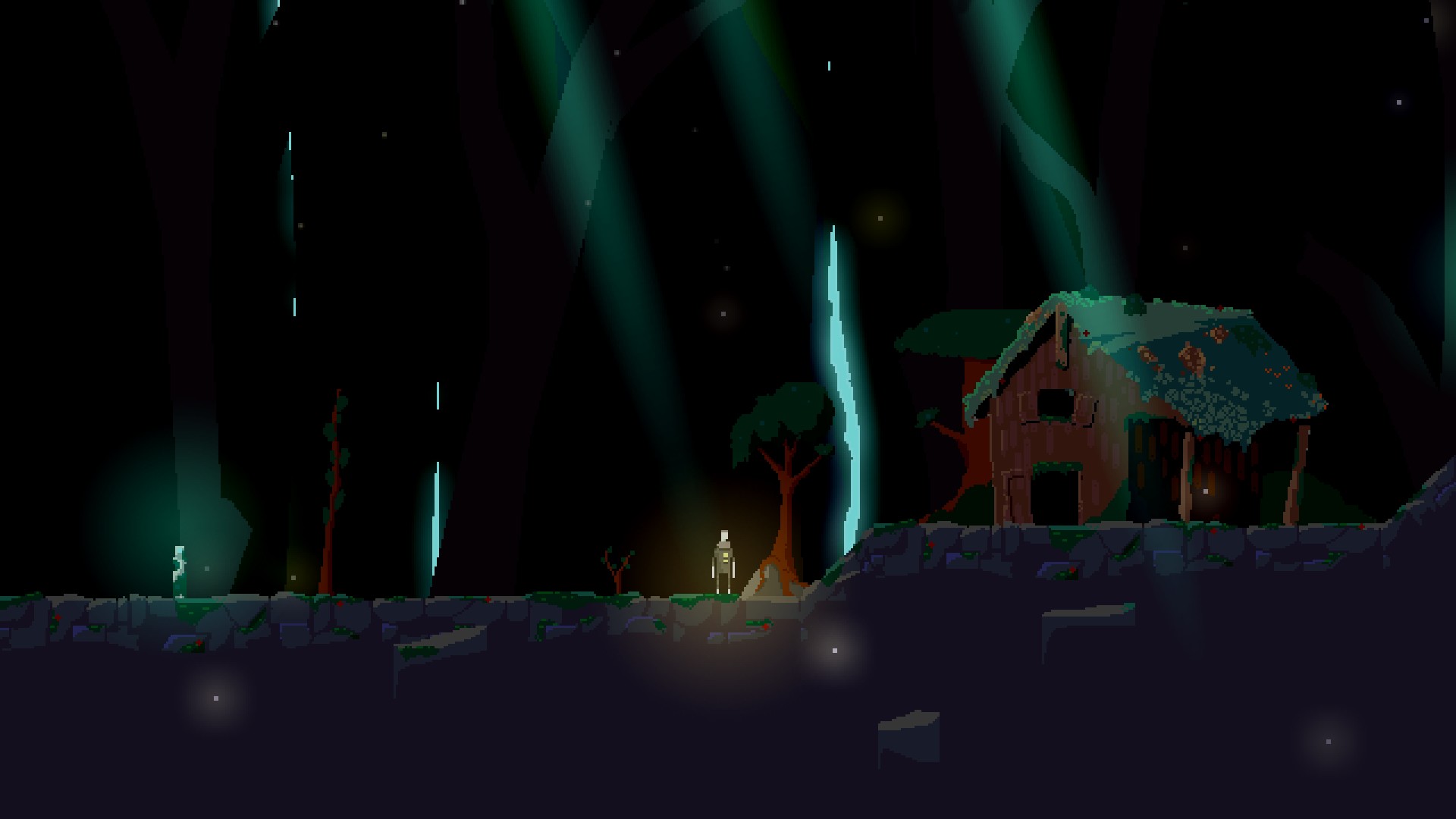 If there is one word that could be used to describe the art of the game, it is minimalistic. Your pixelated blurb of a character has just enough to resembles a human form. The starting areas in The Thin Silence are pretty grim and monochromatic. The color palette expands as you progress up, a metaphor for slowly climbing your way out of depression and noticing new colors – new ways to appreciate life. Mine shafts are later replaced with bright landscapes and colossal mountains. A slow and unexpected shift from claustrophobic opening to more room to breathe in the game. Again, a not so subtle reference to something obvious that the game is exploring. 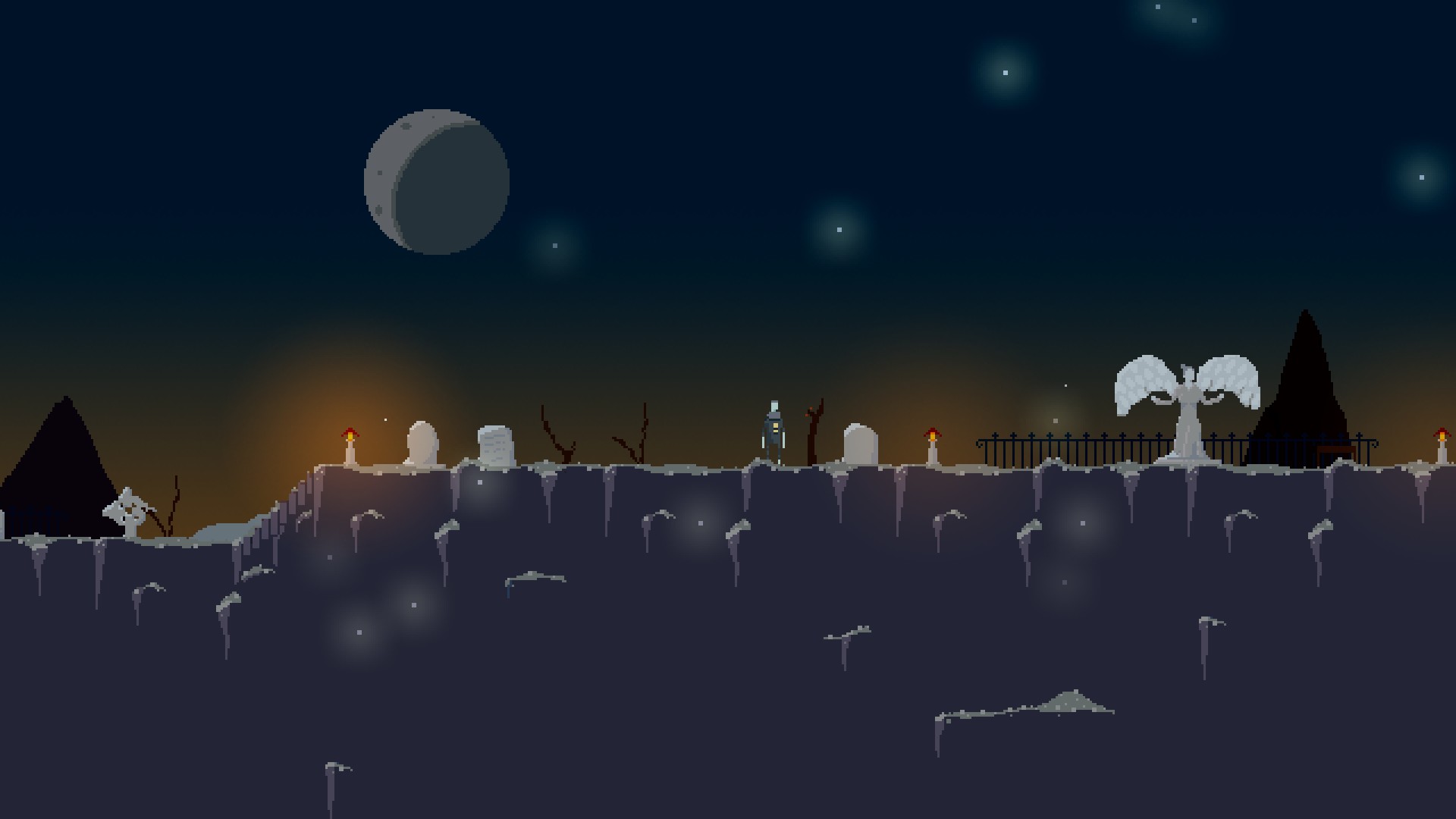 While I initially didn’t expect much here I was pleasantly surprised by the amount of work put in the audio in The Thin Silence. At first, there are some minimalistic ambient sounds encountered in the mine shaft, such as the occasional wind and water dripping from stalactites. The sound ambient is later followed by the haunting and tense piano chords. As expected, the ambient audio changes later to something lighter as you go up but the sharp & heavy piano is always with you to keep you company. 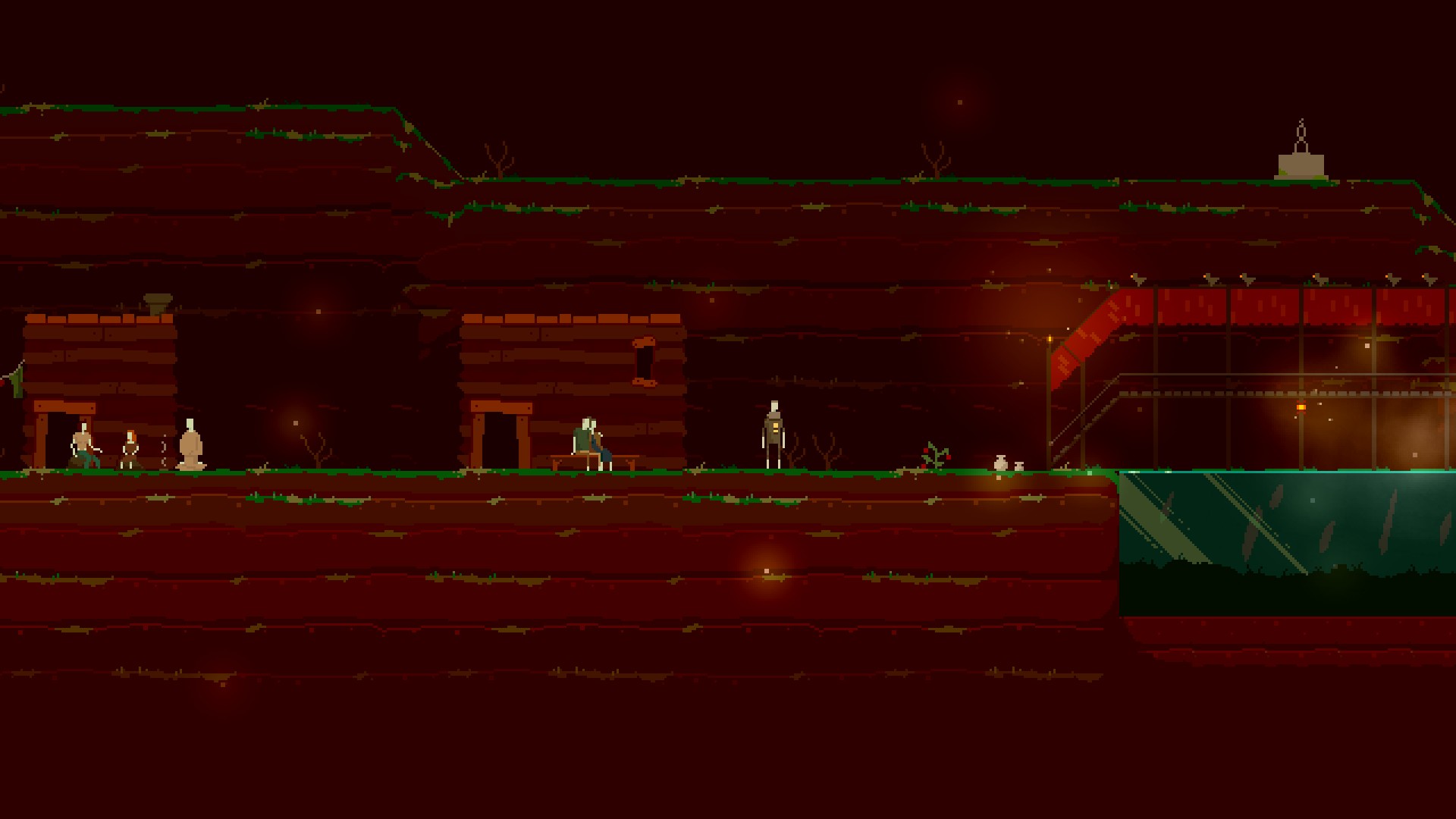 The Thin Silence is a game that doesn’t give you everything on a silver platter. You’re told at the start what the game is about but you need to walk the distance to get the bigger picture. The Thin Silence is not so much about the destination as it is about the journey. That one thing that either breaks us or makes us. That journey where all of the experience and lessons (good and bad) shaped us into a person that we are now. For what’s it worth, The Thin Silence is not a game that will resonate with everyone. The topic of it is not something that everyone will be able to connect with or find a game appealing due to it. And that is perfectly fine. However, I can say now that it is one of the few games that demonstrated understanding and mature approach to the topic.  The exploration of depression here is slow yet sincere. It succeeds in taking the full advantage of the game medium and minimalistic art style to educate us all about depression, regardless if we can connect to the topic directly or not.

A challenging puzzle platformer exploring the subject of depression in a thoughtful way.
7.5