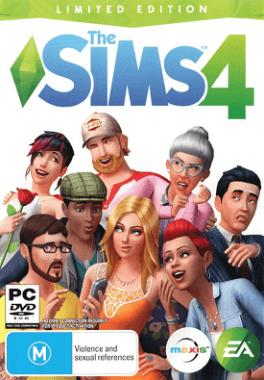 The Sims has been a mainstay of PC gaming since 2000 and with every new iteration, fans are always dying to see how their favourite people-sim has improved. 14 years after the original game launched and we finally have The Sims 4, the newest and brightest installment to date. The Sims 4 manages to keep many of the game’s key components but also goes the extra mile and adds some new features that help streamline the whole game and make it more accessible to new players. While these additions make Sims smarter and world building easier, the result is a large chunk of the franchise’s charm and its ability to engage the player. 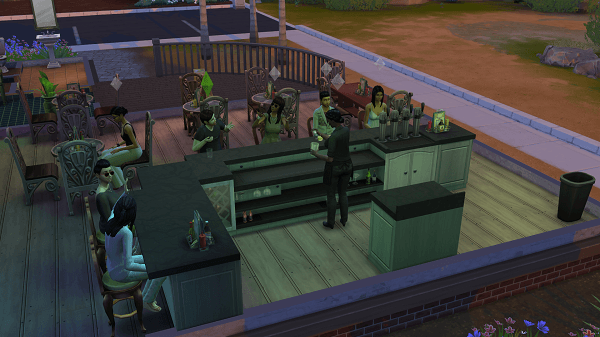 After thinking about this for quite some time, the best way I can come up with to describe the Sims 4 in a nutshell is that it is a streamlined version of the Sims experience. Although that sounds neat and tidy and it does encompass a lot of the game quite nicely it still only scratches the surface. The Sims 4 is all about the interactions between the game’s titular characters, and some of the more integral parts of the franchise have been pushed back a little bit to accomodate. The game’s core elements are still here, make Sims, build houses, and control the Sims in their-day to day lives including looking for work and navigating the dating pool. The new emotions and whims system makes the Sims feel more alive as characters and create entirely new experiences for players old and new.

I have spoken my praises for the new Create-A-Sim in the past, and after sitting down with it for a considerable amount of time (both through The Sims 4, and the CAS Demo that was released a few weeks ago) I can say that many of these praises still ring true. The Sims 4 has done away with the old “sliders and colour wheel” method of designing your virtual avatars, instead letting you sculpt and pull at their face and body like an artist working his clay. Want fatter cheeks? Then pull and stretch them out. Need a thinner neck? Do the same. 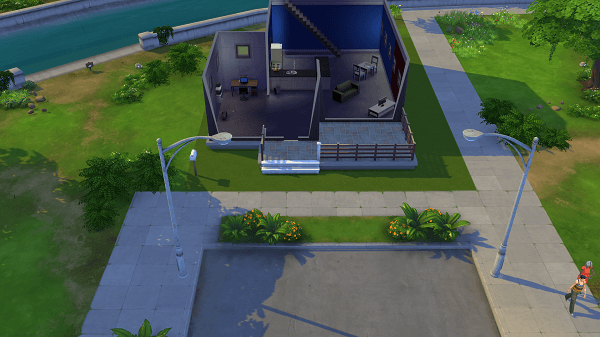 You can adjust just about everything on your Sim until you create near-perfect likenesses of yourself, your friends, favourite fictional characters or just some random person you thought up on the spot. However, since it is such a departure from the previous method, players may find themselves needing to learn the skills to crafting the perfect Sim. I’m not ashamed to admit that it took me more than a few hours with the CAS to properly learn the ins and outs and not make Sims that looked like they got the short-end of the genetic stick.

There has also been a massive change to the way that you build the properties this time around. While you can stick to the tried and true method of drawing your walls and then painting in floors, you now have the option to build entire rooms at once. This is an important distinction because when applying wallpaper, floor tiles or even exterior trim the game will check rooms instead of entire buildings. You can shape and resize rooms as you are building, as well as being able to pick up and move the entire house all in one big block. In many ways the new system is leagues more user-friendly and kind to mistakes than past games, but it isn’t without its faults.

The first problem I encountered was the fact that the game would often arbitrarily cock-up and not recognise a room as being complete. This had multiple negative implications; firstly, and most annoyingly if I went to cover the entire room in a wallpaper, it would either just not include certain wall segments or for some reason paint the exterior at the same time. It is a minor inconvenience for sure but after it happening four, five or even six times over the course of a half-hour build session it became enough to make me want to pull my hair out (the problem was even worse when I was applying exterior trim to a building, only to find certain areas inside the house getting the same trim). Building second stories is almost as much of a nightmare. 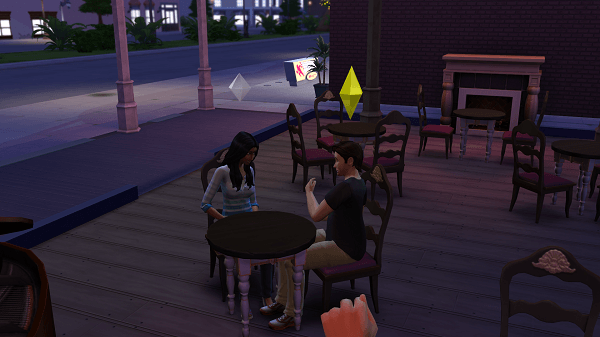 Previously you were able to just start painting floor down after you had put in a staircase. Now you are required to build a “room” and have the game put in a floor before you could do any kind of building or decorating. So many times I had to build walls just for the game to decide to put a floor down, and then delete the walls because all I wanted to make was a little balcony. All of these problems do seem to disappear if you build the rooms independently of one another, and the game does allow for that but it is frustrating to almost have to.

The Sims has always been a franchise that game the player total control over what, when, where and why they wanted to do things. If you only wanted to build celebrity Sims then you could do that. Want to be an architect, then the world is your oyster. While all of these are still very much a part of The Sims 4 experience, the game now has a very strong focus: interactions between Sims. Maxis had added a brand new layer to the Sims, and that is their emotions. The game boasts more than a dozen different emotions that can be triggered through a combination of your Sims traits, and through in-game events. Should your Sim try a pick-up line at the club and be rebuffed, then they might find themselves suffering from a serious case of embarrassment. These emotions provide unique dialogue and interaction options with other Sims and objects in the game (like embarassed Sims can use their bed to “Hide from everyone” or angry Sims can  “Take an angry poop“). Emotions really do make the Sims feel smarter and more alive than previous installments, and the simple act of trying to rebound from an angry encounter can provide more laughs than it ought-to. 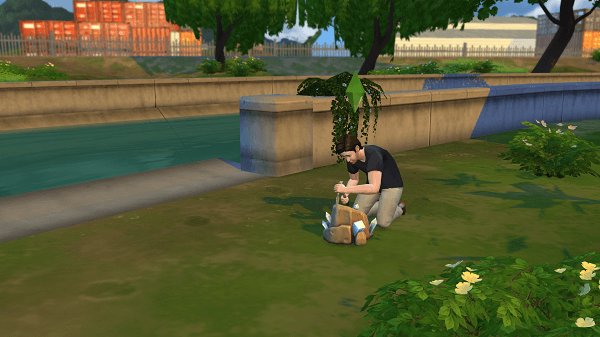 Another key addition to the franchise is that finally Sims can multitask. Never again do you have to decide whether your Sim wants to eat a grilled cheese sandwich or watch TV, because they can do it at the same time! A whole tonne of things can be multitasked together, like playing on a computer and talking to a group of people all at the same time. These multitasking and group activities offer a whole new level of depth to the game that we haven’t seen before.

For all its new features, The Sims 4 does at times feel very wanting, barren and downright lifeless. Some features that fans had grown to love, like pools, and the infamous Create-A-Style have been removed to make way for the new emotions and it leaves the player with less of a feeling of freedom and god-hood, and more like a real-like people-simulator. For some people, this may be exactly what they are looking for but I have always enjoyed that freedom that has longtime been a part of the series, and having it taken away has left a bit of a bitter taste in my mouth. 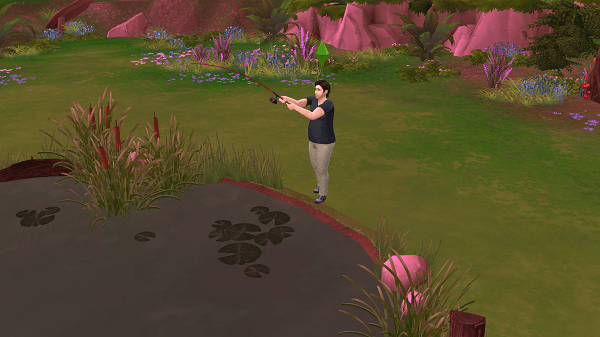 The Sims’ visual and auditory style has long-since been its trademark. You can tell from miles away if a screenshot comes from a Sims game and for good reason: it works for the franchise. This time around, the game keeps its trademark art-styling but goes for a slightly more animated look. It almost feels like the art direction was taken from The Sims 2 and expanded upon from there. 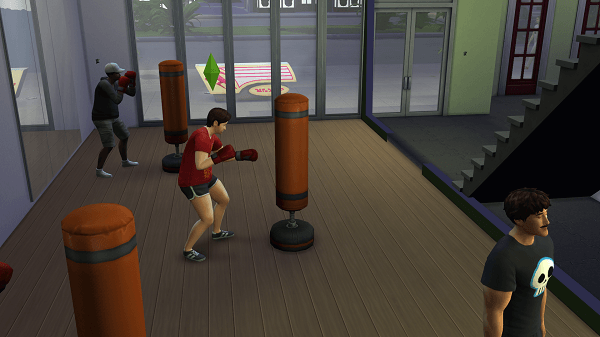 It should also be noted that due to some of the changes in visual styling, and the way the game operates (namely by not having an open world, or dynamic backdrops) The Sims 4 can run on virtually any windows machine from the past decade. No matter how old and clunky your laptop is, you can probably run the game on its lowest settings with little to no drama. However, as with all PC games – there is a STARK contrast between the lowest and the highest settings. At Ultra, the game offers amazing reflections in mirrors and windows, as well as higher-textures for the world and its inhabitants.

As with the visuals, The Sims has an audio style that is uniquely its own. From the artificial “Simlish” Language to the quaint and melodic soundtrack, the game certainly sounds like a Sims title. The soundtrack is particularly great, providing a relaxing atmosphere for your leisurely play experience. 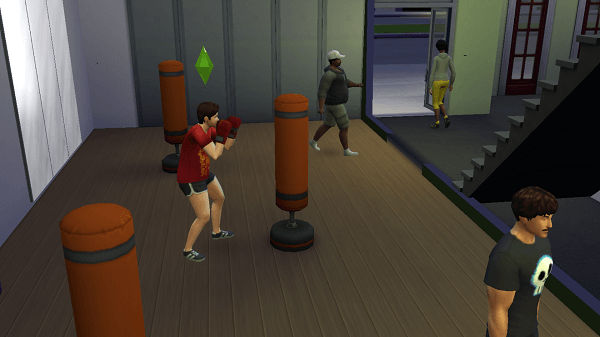 Quite a bit of difference between Ultra and Low settings, but regardless just about any computer can run The Sims 4

I can see where Maxis was heading with their vision for The Sims 4. The game is more streamlined, more accessible and more welcoming but all of this has come at the cost of a fair bit of its charm. The game has shifted its focus primarily to the interactions between the Sims, and while this is a fine direction for the series to take it has resulted in more than a couple key features being dropped as collateral damage. As a base game, Sims 4 has its charm but has left me wanting more… Which I guess is a good thing considering the Sims franchise is built heavily on its DLC and Expansion Packs. Without a doubt expansions will make this game explode to life and become the title that it is truly meant to be. In the mean time, The Sims 4 is a fun way to kill more than a few houurs but for all its charm it lacks serious substance.