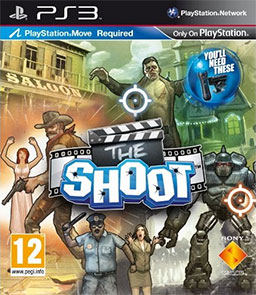 Have you ever dreamt of being a real-life action movie hero?  Taking down cowboys in a saloon, roughing up Mafia bosses or even mowing down hoards of Zombies just like umm… “A Movie Star” well grab that Sony Playstation MOVE controller whack in “The Shoot” and be transported to an array of Hollywood-esque themed movie sets to see if you have what it takes to shine as the brightest star in Hollywood. Lights, Camera … SHOOT’EM !! 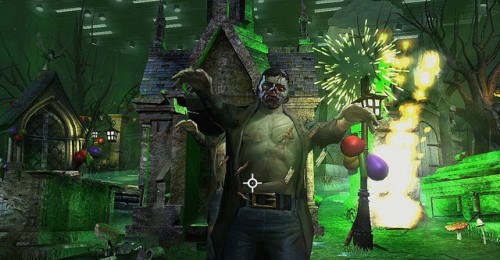 “The Shoot” is an on-rails style shooter similar to House of the Dead, but nowhere near as intense and action packed.  You have no control on where you’re going. All you have to worry about are the enemies on the screen and making sure you don’t piss off the movie director.  The Shoot is fairly simple to play; all you need to do is aim at the bad guys press the trigger and blow them up into smithereens.  You don’t even need to worry about reloading your weapon as I was constantly flicking the MOVE controller off the screen thinking that I had to reload.

The Shoot will not blow you away with any unforgettable moments, but it still is a fun pickup and play game that you can enjoy on your own or with a friend.  As with all on-rail shooters the main point of the game is to ensure all the bad guys get shot before they shoot you.  You’ll be taken through five different movie sets starting off with the classic western set where you can take down cowboys and dynamite wielding miners and save damsels in distress.  You’ll also get to experience a Mafia Movie, Robot, underwater and everyone’s favourite, a zombie/monster horror movie.  Each movie is broken down into four scenes with a stand-off with an end of level boss on the last scene. 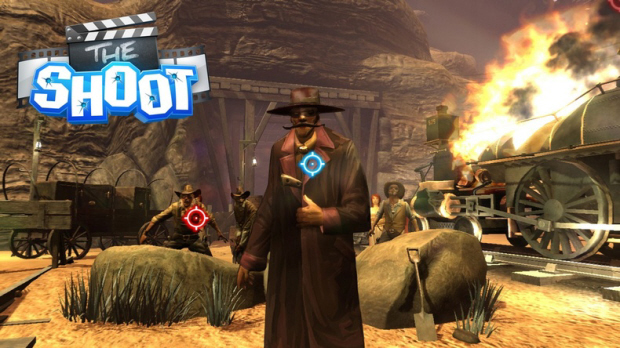 You start each movie with five takes (LIVES) and the director’s happiness meter is your energy, impress him with super shooting and hit streaks and your energy meter goes up, if you perform poorly by getting shot or shoot innocent civilians the happiness meter drops; pissing off the director and forcing you to start from the last checkpoint.  The Shoot focuses on accuracy and hit counts, the higher your hit streak the more points you will rack up and the more power ups you can earn.

This brings me to the Playstation Move controller, as with all on-rail shooters you’re success with taking down bad guys accurately and quickly all hangs in balance of how well the controller can handle the on-screen commands and reaction times the player throws at it.  With The Shoot, even fine tuning the controller’s smoothness and sensitivity and re-calibrating it twice, I still found the on screen accuracy a little sluggish and not as quick as I’m used to with other on-rails shooters which was a little disappointing and frustrating at times. 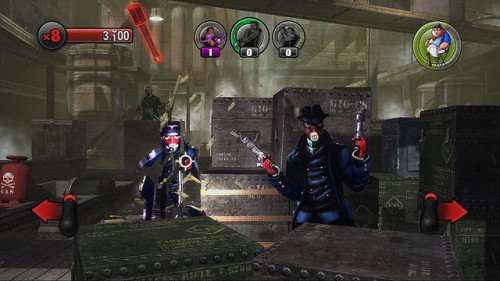 The Shoot has a few unique little extras thrown in to help spice up the game and make it a little more interesting.  Raking up a certain amount of hit streaks unlocks special moves that players can perform to gain the upper hand when the action gets a little hairy.  The first special move is called Shockwave, to initiate this – the player will need to swing the MOVE controller around and perform a 360 style move in the air.  If your successful this slows down time allowing you to quickly and easily take down all the enemies on the screen.  The second is Showtime; to kick this bad boy off all you have to do is point the MOVE controller down towards the floor and press the trigger button, doing this will blow up nearly everything on the screen.  The last move called Rampage will initiate when you point the controller into the air towards the ceiling and press the trigger button.  This will let you go on a rampage with machine gun style shooting allowing you to rip into all the enemies on the screen without losing your hit streak if you miss anything.  Both Showtime and Rampage are easy to pull off but the accuracy of Shockwave was a little hard to perform at times. Having to swing the controller in a 360 motion sometimes just didn’t register, if not pulled off first go and there’s a lot of enemies on the screen the feeling frustration can kick in, the director gets pissed off and you’ll certainly have to re-do that scene again. 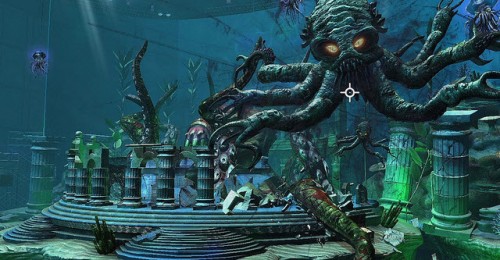 Other motion action moves taking advantage of the MOVE controller have you side stepping left or right by moving the aim in the desired direction to move out of the way when a bad guy throws a knife at you, I found this pretty cool at first, but a waste of time as it was far easier to actually shoot the object out of the air before it got to me.  You’re also able to duck by moving the MOVE controller down to avoid projectiles being thrown at you; this however is only available to perform at specific times in the game.

Video Review below takes you through The Shoot 101 class where you can see how everything fits together with the specials moves and other features.

The Shoot can be enjoyed as a single player experience or with a friend. They can either compete against you or assist you with obtaining a high score that will be posted on the online leaderboards, once you complete a Movie set the challenges and Score Attack modes open up allowing you to play each scene again to achieve high scores and obtain a five star rating, this certainly adds to the replay ability of the game. 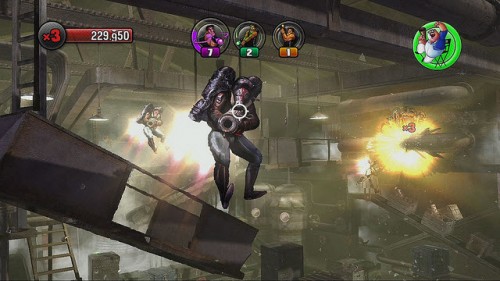 Unfortunately The Shoot is a fairly short game, with five movie sets containing four scenes each, each movie will take you less than 30 mins. to complete.  Of course like other on-rail shooters there are hidden collectibles to shoot / pickup along the way in the form of torn up poster pieces that will have you going back to find so that you can unlock the challenge modes, but if you’re not interested in collecting collectables then you’d be able to shoot yourself into stardom and complete the game in approx. three hours.

The Shoot is fun casual pick up and play on-rails shooter that can be enjoyed on your own or with friends.  It hasn’t revolutionized the shooter genre in any way but it’s a nice little addition to the MOVE family and a welcomed return to the shooter style games on the PS3 that have previously only been available on the Wii.