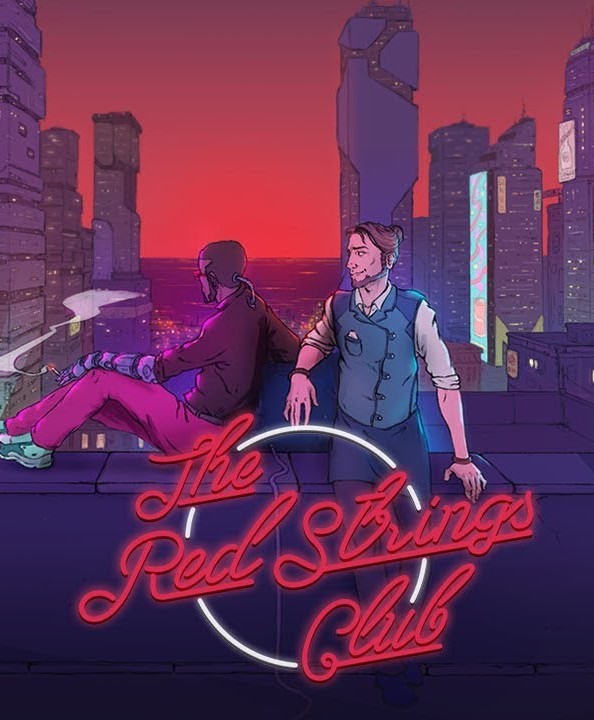 Saying that The Red Strings Club is a point n click adventure is technically correct, but that definition strips so much of what the game is about. Now, if I told you that you get to play as a bartender with a goal to get your customers drunk and reveal information to you or making genetic implants in form of pottery……that would be a far better description. The Red Strings Club is all of that and so much more.

The game opens up with quite of a spoiler – one of the story protagonists, Brandeis, is falling to his death. He finds peace before hitting the ground, thinking how it’s not a bad way to go. Next we are shifted back into the past, with Brandeis playing piano and his friend Donovan tending the bar. Compared to what we witnessed earlier, it is a serene moment and something that defines the overall atmosphere in The Red Strings Club. After some dialogue back and forth, we are met with our first puzzle. Bartender Donovan has a job of fixing the drinks for his clientele, and with the right ingredients, he can squeeze valuable info out of them. The puzzle is sort of a minigame where it is necessary to create a perfect cocktail that resonates with our customers mental state. Being somewhat of a physics-based puzzle, it didn’t end up being as frustrating as I found it hilarious. After 5 minutes of spilling hectoliters of alcohol from those four bottles, I managed to conjure a decent cocktail while imagining how the whole bar should be flooded by now. While serving it to Brandeis, we learn more about the world we’re in and that it’s far from utopia. Brandeis blames it a lot on corporations and says how it is his dream to take down a few (foreshadowing wink wink). Soon enough they’re both interrupted by a barely functioning android bursting into the bar. Brandeis taps into its memory circuits to find out more about it. Our newcomer by the name of Akara turns out to be a factory android designed to manufacture human upgrade modules. That is all done through minigames of crafting blocks of biomatter into required upgrade modules. Their design is similar to pots of clay so the game gives us a nice excuse to experience being a cyberpunk clay artisan. With every introduction of important characters of the game and more minigames, the story begins to unravel. Akara is working for a corporation called Supercontinent Ltd. They specialize in such behavioral implants and augments but their ambition doesn’t stop there. They plan to soon launch something called Social Psyche Welfare, a program that eliminates depression, anger, and fear from everyone. The catch is, they want to do it sneakily and without anyone’s consent. Once Donovan and Brandeis learn about that, the story really kicks into the motion. 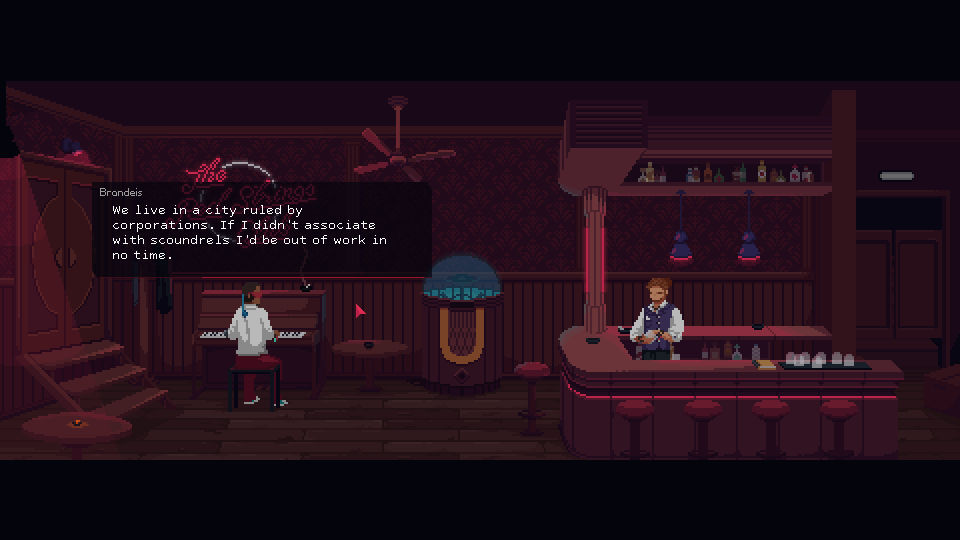 The plot advances through minigames of mixing drinks, making futuristic pottery and some hacking & social engineering. While some minigames like mixing drinks tend to be hilariously wonky, making hi-tech pottery is strangely relaxing. A big part of it goes to a magnificent soundtrack ranging from soothing noir jazz pieces to enjoyable synth tunes. It wasn’t so unusual to redo my pottery module after shaping it perfectly so I could savor more of that synth goodness. I also experimented a bit with trying to craft some of the phallically shaped pottery just to see if it was possible. Even though the game decided against giving a green light to my lewd biomatter modules, I was still able to make them. Just putting that out there as a potential selling point. By clicking on the left side of the game’s menu, we can bring up a timeline from the start of the game to the Brandeis’ inevitable end. In between are the dots we have to fill with various choices that will put our sense of ethics and morality to the test. Whatever we decide, it is always interesting to see how some choices have an impact on the next one. Of course, it is impossible to go through all of them in just one playthrough so it is a decent way to add some replay value to the game. 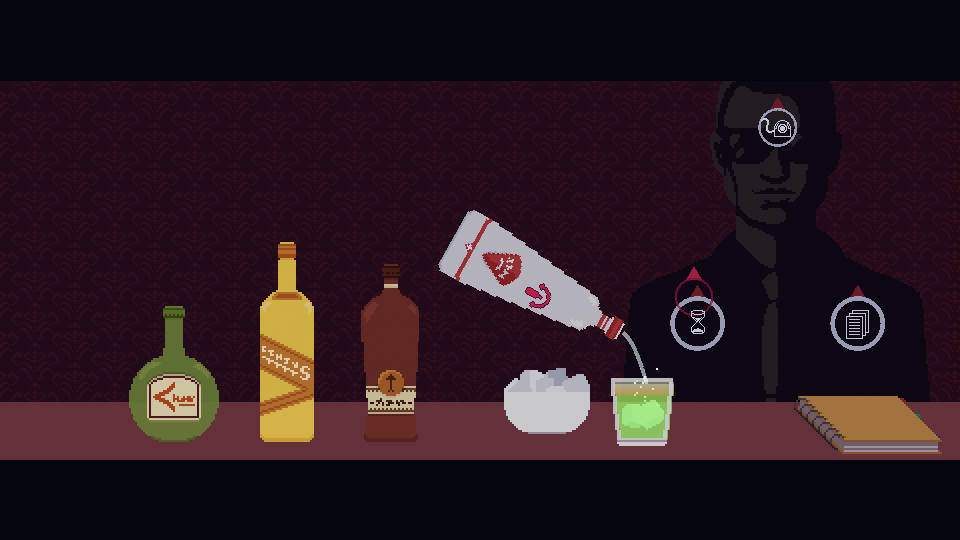 The pixel art direction for The Red Strings Club works perfectly with its cyberpunk setting. It gives us plenty of moments of detailed animated backgrounds to gaze at. It is impressive how much of the work went into making backgrounds less static. There is always something moving, whether it is flickering neon lights or computer terminals. The developers clearly went an extra mile here, understanding that the game’s setting coupled with its choice of an art style is made to impress us if done properly. 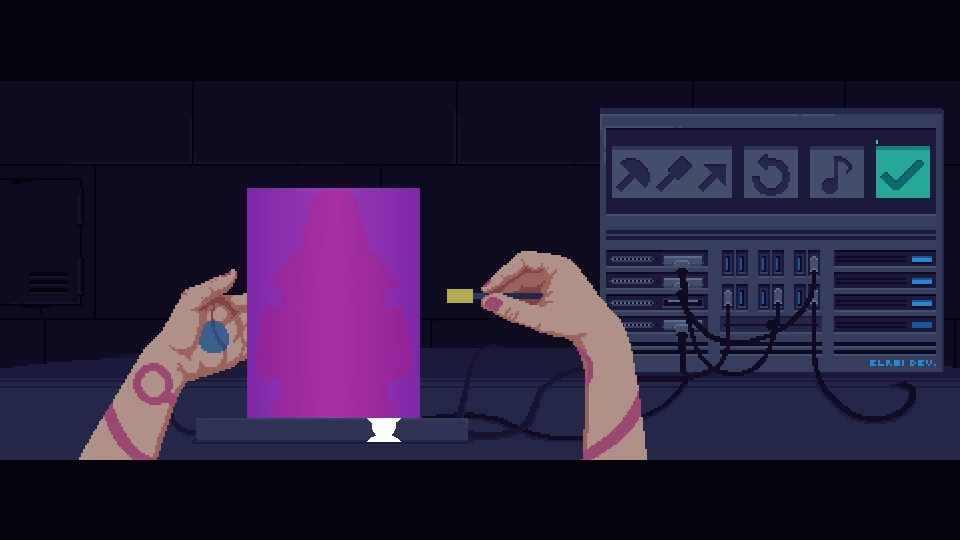 Another selling point of the game is its great soundtrack that often compliments the setting and most importantly, the characters. While mixing drinks, you are accompanied by some smooth piano notes and upbeat synth tunes are there to make your work better as you craft biomatter modules. The more you play, the more you are impressed with the rich soundtrack of The Red Strings Club, despite its moderate story length. 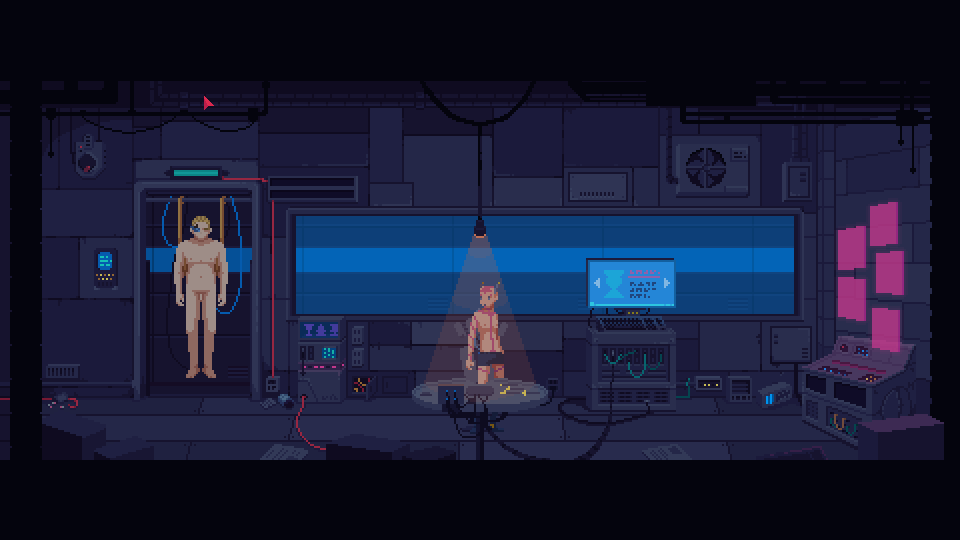 I consider that the best games are those where the impression stays even after you finish them. The Red Strings Club is a good example of that. The real repercussion of your choices in the game shows way later after you stopped playing. You rewind them in your mind, wondering if you did the right thing. The choices here are not in the spotlight as it is your pondering on the ethics and morality of what you picked. It’s not a surprise that the game is made with more than one playthrough in mind. Eventually, you find that there are no bad or good choices in The Red Strings Club. You may perceive them as you please, but in the end, they’re the ones you have to live with.