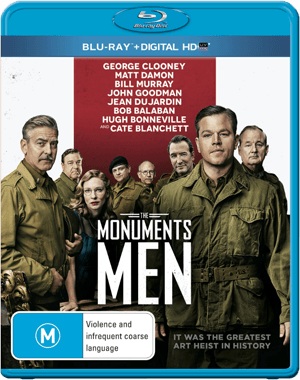 Set amongst the backdrop of WWII, The Monuments Men is loosely based on the tales of The Monuments, Fine Arts, and Archives program” who were a group of allied soldiers who were task with the rescue and aquisition of priceless historical and cultural artifacts before they were destroyed by the Nazi regime.  The film deviates greatly from the real-world events by not only changing the names of the characters and many of the events to provide a more fluid and entertaining narrative. Unfortunately this doesn’t quite hit the mark. 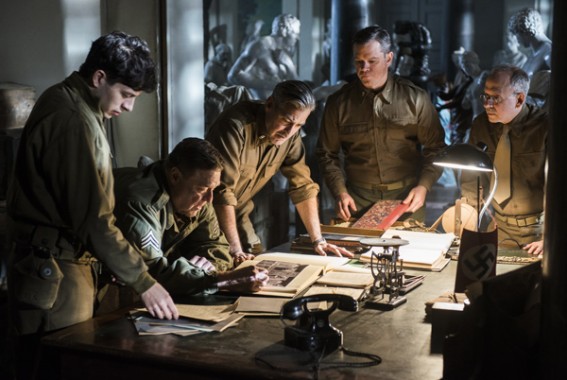 Set in 1943, in the midst of World War II, The Monuments Men follows Frank Stokes (George Clooney) as he convinces the US President that victory over the Axis powers will mean nothing if the end result is the destruction of priceless and irreplaceable pieces of art. To this end he is tasked with creating a team that are colourfully known as The Monument Men who’s task is to enter the enemy controlled regions and safely steal the priceless paintings and return them to allied soil. The team obviously runs into opposition on both sides, as the allied forces don’t want to change their battle tactics just to save a few paintings. It is a fine enough set-up for a film and actually helps to set it apart from the rest of the war movie genre. However, Clooney and his band of men aren’t always able to keep the plot flowing at a good enough pace.

The Monuments Men is filled to the brim with some of Hollywood’s best actors. Not only does Clooney himself pull double duty as the director and the film’s lead, but he is joined by other Hollywood A-Listers like Matt Damon, John Goodman, Bill Murray and Cate Blanchett. Unfortunately though. all of this talent doesn’t work in the film’s favor, with many scenes feeling watered down and no characters getting their chance to shine.

The film is very episodic in nature, breaking up the cast into small groups and having them each off on their own adventures. To this end, it really does feel like the movie would have done better as a four or five episode miniseries or even a full-fledged television program. As a film it just feels disjointed, and we as an audience have a hard time getting to really know any of these characters before the perspective changes and we are following a different group. It is an interesting note that the medium of delivery for something like this really affects the overall experience. Had The Monuments Men been released as a mini-series, I would feel a lot more positive having watched it. 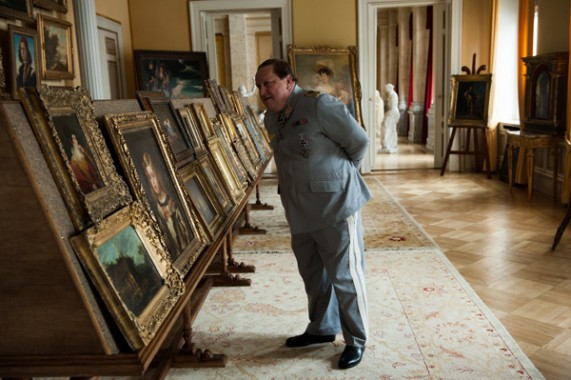 Don’t get me wrong though, I didn’t dislike the film. In fact I found its combination of humor and wartime drama to be a healthy mix and was pretty entertained through the entire viewing. The stories, although somewhat disjointed are all fun and had me wondering how much of the film’s historical basis was actually kept (turns out, not all that much). However if you are a history buff, you will probably be pointing out inaccuracies every few minutes, so you just need to go int there knowing that it isn’t meant to be an accurate recount of what happened.

The actors themselves also attribute to the problem. In many scenes, the delivery just falls flat. I’m not sure whether the team weren’t giving it their all, or Clooney needs a little more time in the director’s chair but this definitely wasnt the greatest performances of anybody’s career. Again not to say that the acting was terrible, just that a certain level is expected and they didn’t live up to it.

I should also note that this just isn’t the type of movie that Hollywood makes anymore. In a world that is filled with action stars and super heroes, adaptations of real-world historical events tend to fall by the wayside. While it is sad to see less and less of these types of movies, it is kind of easy to understand why. The whole film, while entertaining does often feel like a museum-style educational docu-drama that you would have been shown in highschool. There aren’t all that many big-budget climactic moments in the film, and in the end it does come off kind of indie (which, considering its $70,000,000 budget is I’m sure not what was intended). 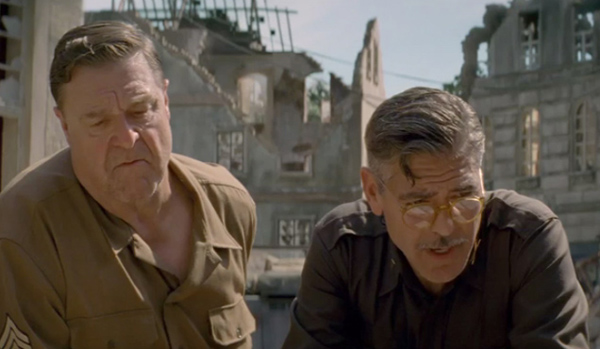 One thing that can be said about The Monuments Men is that it is incredibly well filmed. The entire movie was filmed on location in Germany and Britain, and it really adds a feel of authenticity to the whole package. The costumes of not only the main actors, but all of the background extras fit the time and setting perfectly, and it is easy to let yourself imagine this squad really existing (which they sort of, kind of did).

As I mentioned above, a lot of the actor’s performances through the film are sub-par, and many feel incredibly forced. The emotion that is meant to be portrayed in many scenes just comes across as insincere. I am typically not the type of person to be sucked out of a movie experience from a few poorly delivered lines, but there was just something about the whole presentation of The Monuments Men that really made me notice when it was happening. 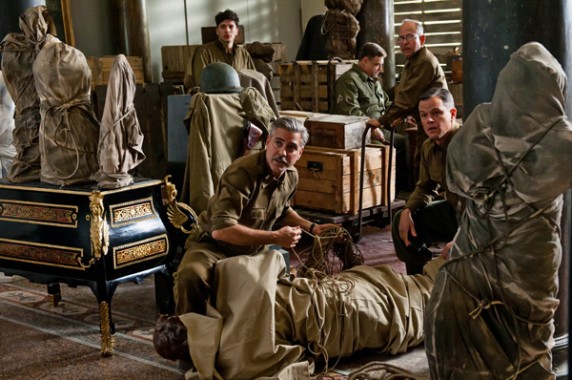 George Clooney and Matt Damon together in a film about a group of men trying to steal something priceless from a foe that should for all intents and purposes be impossible. You could almost take the description of this movie and swap it for Ocean’s Eleven. Regardless of its similarities, Clooney does a valiant job of directing The Monuments Men and its ensemble cast. While the movie has its fair share of issues, the story of these brave men who risked their lives to save history itself is worthy to be told, and while this may have made a better television drama it is still an adequate retelling that many people will enjoy, even if they only watch it once.