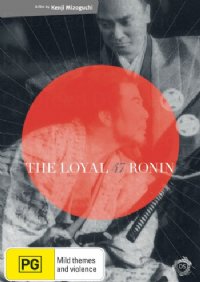 Truth be told, I’m not a major fan of period dramas, or what the Japanese call jidaigeki. Most have clichéd storylines, overused cinematography, and barely any historical validity to justify their place in a “period” of any sort.

Kenji Mizoguchi’s The Loyal 47 Ronin (otherwise known as The 47 Ronin) is, at heart, a period drama; however, there are several aspects of it that shine out as something more. It’s impossible to pin down exactly what about this film captures the heart – perhaps it’s the silent film era-esque movements, the powerful yet minimalist soundtrack, or the beautiful acting – but in this 1941-2 jidaigeki, there is something far deeper than just a period drama.

The narrative begins in the Shogun’s court, where Lord Asano attempts to murder Lord Kira. His attempt fails, however, and Lord Kira is ordered to commit harakiri (also known as seppuku, where the samurai commits suicide by slicing their stomach). As a result, his team of samurai are rendered masterless and become ronin. One of the samurai, Kuranosake Oishi, cannot let the death of his master rest in peace; together, he and a group of ronin plot to avenge Lord Kira’s death and kill Asano. 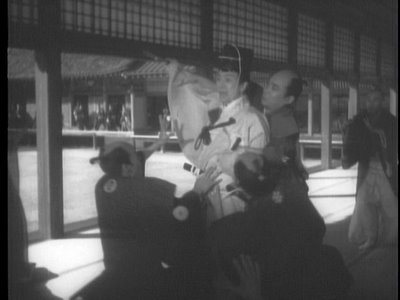 The murder attempt that started it all.

The film is divided into two parts, with the first originally released in 1941 and the second in 1942. Based on a true story – you can actually visit the graves of the 47 ronin in Japan –, The Loyal 47 Ronin tells a tale of honor and sacrifice that is poignant on more than one level. While the story may not be the most unique, the way Mizoguchi executed it ensures it is told in the most powerful manner it can be. The film does move quite slowly – think of it as a very old Harry Potter and the Deathly Hallows Part 1 & 2 where the first part is more of a background/build-up and the second part houses the majority of the narrative movement in the film. However, the slow movement allows us as viewers to gaze at the beauty of the movements and of the scenery within the film. It may not be everyone’s cup of tea but the plot is executed in a manner that best suits the rest of the film’s stylistic elements, and I believe Mizoguchi pulled it off splendidly.

If it has one, the film’s main character would have to be Kuranosake Oishi, the leader of the ronin. Kuranosake reflects a certain love and loyalty towards his late master that most would envy, but also has a part of him that is so innately human – unlike so many other fictional characters. Kuranosake is perhaps one of the most well-rounded characters I have ever come across in a film, and one of the most touching to watch. Chojuro Kawarasaki delivers a striking performance and captures the character so well it is almost as though he is the ronin, which is a difficult feat considering the history he has to live up to. 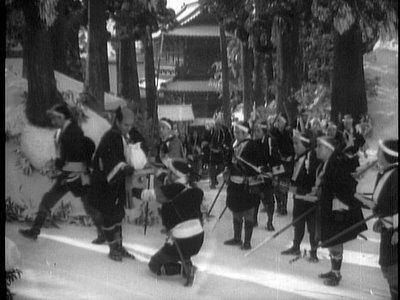 What a majority of the film looks like: groups of men running around.

However, aside from Kuranosake, The Loyal 47 Ronin makes its protagonist a collective, which can be found in the group of ronin. The two masters, Lord Kira and Lord Asano, are merely catalysts for the tale and feature very little in the film (but by very little, I do mean at least ten minutes each). The group of ronin do share traits that make them worthy of being in the film though; largely they reflect the tales of persistence, loyalty, love and honor that are communicated through Kuranosake and the narrative. Each of the actors does a great job at conveying their love for their master and their desire for revenge, and although they can be a tad overdramatic at times, the ronin made a very solid performance as a team. With that being said, the overdramatic movements and reactions of the ronin do genuinely contribute to the silent film-esque aspect of the film, with its exaggerated gestures and largely visual tale.

And speaking of visuals, what a film this is for black and white cinematography. In the old days before talkies came along, filmmakers had to rely on large movements and expressive facials and body language. Even though The Loyal 47 Ronin is a talkie, it takes elements from the silent era to make the most of the image on the screen. The characters move with a definitive fluidity to them, and navigate around the sets as though they actually inhabit those spaces in real life; in saying that, Mizoguchi commands all the characters to have a strong presence on camera through their exaggerated collapsing, or exaggerated emotional trauma.

Mizoguchi also found a wonderful backdrop to accompany the great character movements, and the film is layered with great contrast as well as stunning props. It’s true that in The Loyal 47 Ronin, each shot tells a story – combine the indoor-outdoor balance of the samurai’s living quarters with the picturesque trees around the location, and the story is indeed a pretty one. 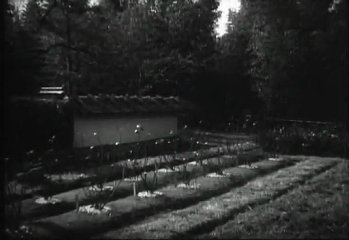 Beautiful visual backdrops are littered throughout the film.

The audio, on the other hand, is worlds away from the overdramatic movements and high contrast of the visual aspects. Mizoguchi made the right decision in not overwhelming the audience, and The Loyal 47 Ronin features a soundtrack that leans towards the more minimalist in films. The soundtrack is subtle (with plenty of string instruments) and only comes in when absolutely necessary, which ensures viewers spend more time looking than they do looking and listening.

Of course, since the film was made back in the 1940s, audio quality is not of the highest standard; however, I watched the entire film with subtitles anyway (as a large majority of viewers will). Often, the speech sounds like a bit of mumbling rather than coherent sentences, but the audio is unfixable and we have to make do with what we’ve got.

The DVD contains an audio commentary by Dr Adrian Martin, the Senior Research Fellow in Film and Television Studies at Monash University. While audio commentary is great, three hours is too much to sit through again – even if the film is visually and narratively wonderful. Additionally, I was very disappointed this film didn’t include a booklet with some historical background on the real forty-seven ronin tale in Japan. All in all, the special features are nothing to get excited about, but it’s nice to have if you feel compelled to watch the film again with an Australian voiceover.

The Loyal 47 Ronin is a beautiful piece of Japanese black and white cinema that really doesn’t get the attention it deserves. With a great set of characters, wonderful cinematography, and a narrative that is touching (although slightly clichéd), Kenji Mizoguchi really couldn’t go wrong with this one. Even if you don’t really like period dramas, it’s most definitely worth giving this jidaigeki a go.

I give The Loyal 47 Ronin