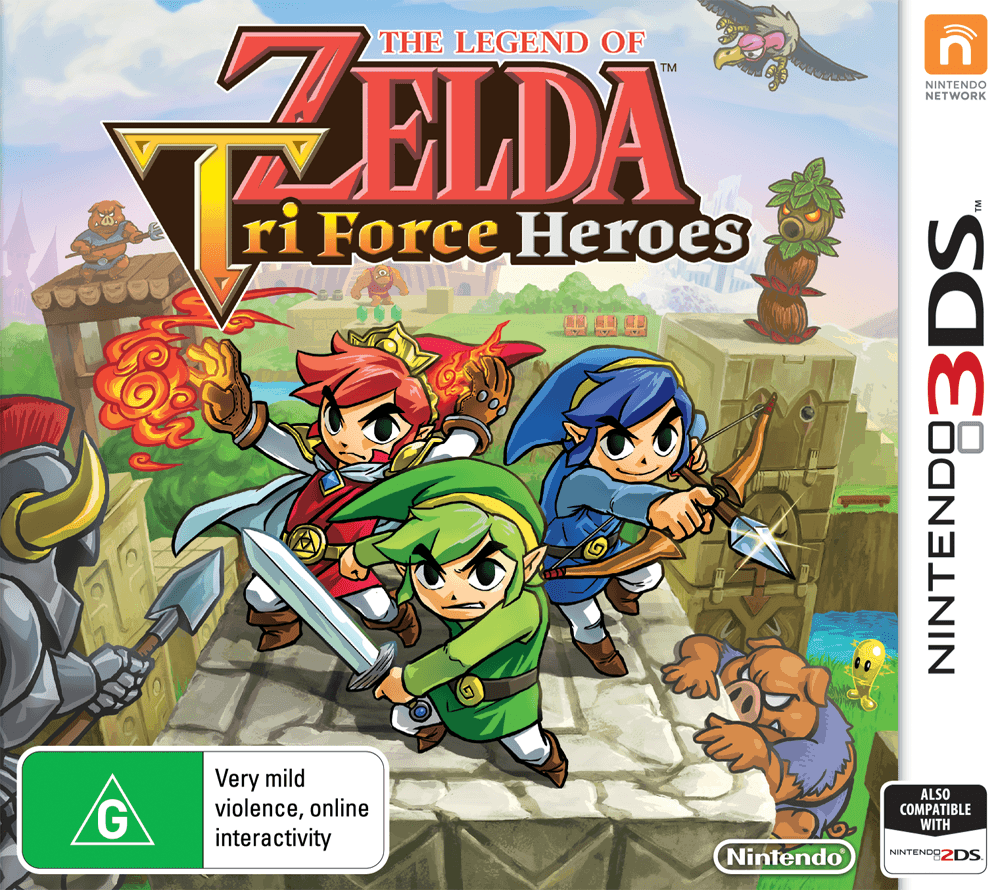 Multiplayer Zelda games are not exactly the mainstay of the series, but when the occasional Four Swords pops up it is usually a barrel of laughs to play with a few friends. Tri Force Heroes is the spiritual successor to those Four Swords games and puts players once again in the shoes of Link as he battles monsters, solves puzzles and collects loot with two other players. Sadly, the game lacks the charm and excitement that you want from a Zelda title and suffers from gameplay issues that make it a challenging and tiring multilayer experience. 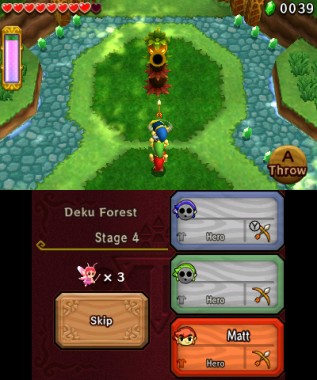 Tri Force Heroes is set after the events of Link Between Worlds and has our hero, Link travel to the land of Hytopia, a kingdom whose inhabitants are absolutely obsessed with Bing fashionable and wearing the best clothes. Once he arrives our hero discovers that an evil witch known as “The Lady,” has cursed the princess Styla into being unable to ever wear nice clothes…

The problem with the story is that it just doesn’t feel like a Zelda game. There are only a handful of characters in the game and they are all really over the top caricatures with puns for names. Even the stages that the player goes through are known as the Drablands, which just really hammers whole the whole “fashion,” theme this game is going for. In the end the wacky, zany, ham-fisted setting and story feels like it is more akin to something from a Paper Mario game than a Zelda one and what’s worse is the story just seems to serve as a tenuous link to the game’s 39-something stages instead of a real, living world. 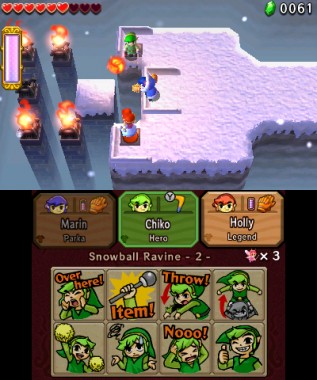 The Legend of Zelda: Tri Force Heroes is a bit of a departure from the series’ norms and instead of the single-player dungeon crawling exploits, goes for quick bursts of multiplayer puzzle solving. This is a game that has been designed from the ground-up for three people to play together and they aren’t shy about expressing it. Whether you are playing online with strangers, with friends, or via local Co-Op you will always need EXACTLY two other players to enjoy the game. It is a bit of an odd limitation that works thematically but not so well mechanically.

You are also able to play through the game on your own, switching between three playable Links at any given time. It is funny that they included the ability to switch between Links during single play, but not so during online sessions (an issue I will touch on shortly). However, single-player is a bit of a drag and really just makes you wish you were playing with other people.

The game’s strength is definitely in its local co-op. Tri Force Heroes offers download play, meaning that you only need one copy of the game to play wi your friends. This is probably some of the best use of Download Play that I have seen outside of Mario Kart games and gives players access to just about every aspect of the game aside from making their own costumes.

Those of you who are familiar with the Four Swords Zelda games will immediately recognise the formula that Tri Force a Heroes uses. You select your stage based on a few different locations and then once in that stage you will have to use the combination of your swordplay skills, provided weapons and your partners in order to solve the puzzles and progress through. Depending on the difficulty of the puzzle, the ability of you and your partners to work together, and how far into the game it is, it can take anywhere from 3-8 minutes for each puzzle, so anywhere from 10 minutes to an hour for any complete stage. Beating all the stages in an area will unlock some new challenges that you can accomplish, but sadly these don’t offer much more to the gameplay experience and often just have you racing through again with a limited time or less hearts than you would otherwise normally have. 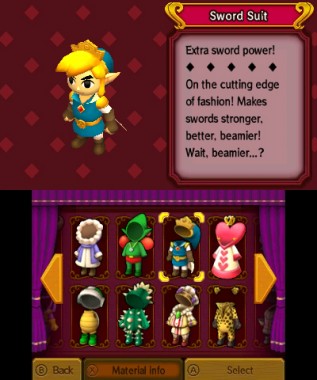 As you progress through the game’s stages, you will collect new items that can be crafted into costumes for you to wear. Aside from the obvious aesthetic changes, these costumes also offer some unique bonuses; the Kokiri Costume allows you to shoot three arrows at a time while the Big Bomb costume makes your bomb’s blast radius even wider. It is a really cool concept but sadly doesn’t feel fleshed out enough for a full game. None of the costumes provide any real new ways to tackle the puzzles. Which is something I would have really liked to see.

One of the biggest issues I have with Tri Force Heroes multiplayer is that the online network for the game is absolute atrocious. Every time I played with others online I either experienced lag so terrible that it made the game nearly unplayable, or I was stuck waiting around for a game. Often times these waits were up to 45 minutes. The wait times are partially due to the game needing three players, and this combined with the lag just resulted in a broken, horrible online experience for me. Even the local co-op suffers from lag, although it was much less frequent and a lot more bearable when it did occur.

The final gripe I have with Tri Force Heroes is that is suffers from really bad options for communication. When playing online, your only means of talking to your fellow players are with a series of eight buttons that when pressed will flash up a logo on the screen with some text that say something like “Over Here!” Or “Noooo.” Now, being a multiplayer puzzle game, limiting the ways in which players can communicate really creates a tonne of problems that just shouldn’t be there. This is of course not the case when playing local co-op because you can actually talk to one another and work as a unified team. 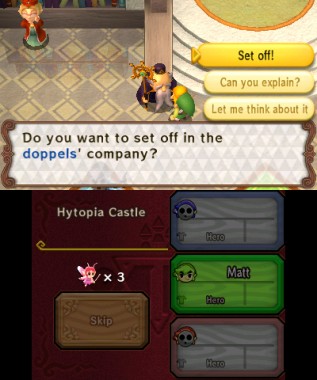 I have to admit that I am a huge fan of Tri Force Heroes visuals. The game is built on the same engine that Link Between Worlds was, so things look almost identical here as they did there, which creates a nice sense of visual cohesion between the two games, plus the art style was pretty on-point in LBW so it is nice to see it revisited here.

Audio is again similar to LBW, with Link, his items, the enemies and the world items making largely the same sounds as they did them. This again creates some cohesion between the game’s with is really nice and keeps it feeling like a part of the same world. The music that plays when you are in a stage is usually pretty frantic and high energy, encouraging the players to rush around with a sense of urgency, and it also adds a bit of excitement to the overall product. 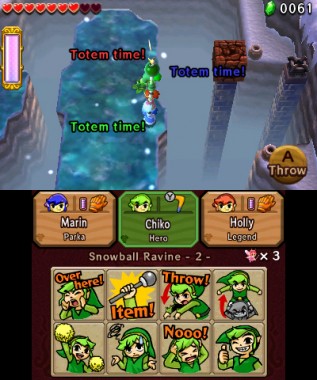 I’ll be frank; I didn’t really enjoy my time with Tri Force Heroes. From its ham-fisted tone and setting, to its incredible limits on gameplay; and online connectivity and communication issues that are unforgivable in a game that is designed around online play, I just felt that Tri Force Heroes is flawed in almost every fundamental aspect. The sad part is that there are some cool concepts here; the costume abilities and co-op gameplay are really interesting and could really do with more fleshing out, and if you have two other friends then the local co-op can be an absolute barrel of laughs. It is hard to recommend this game at full retail price because it really does feel like a small downloadable title that you can just muck about with and waste a little time on