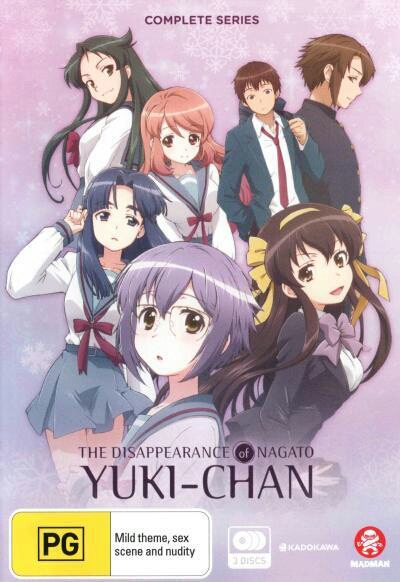 The Disappearance of Nagato Yuki-chan

Yuki Nagato is a shy student at North High School and the president of its literature club. She also happens to be the only member of that club until she manages to recruit her protective friend Ryoko Asakura and her new friend Kyon. Tsuruya and Mikuru Asahina soon join the fun, and Haruhi Suzumiya and Itsuki Koizumi even manage to get in on it too. What ensues is an endless amount of fun for Haruhi, all while Yuki struggles to work up the courage to tell her crush Kyon how she feels about him.

Something to get out of the way first: this is not a sequel to The Disappearance of Haruhi Suzumiya. If you want an official sequel to it, look for a copy of the 2011 PSP/PS3 game Suzumiya Haruhi no Tsuisou, which may still be available from online Japanese retailers. Now, onto what this anime adaptation is. Puyo’s series largely mirrors the events of Nagaru Tanigawa’s original series; it progresses like a time-delayed version of it. It seems that this series is aimed at people feeling nostalgia towards the original, and it is filled with references to or actual events from it. This saves the series from being just another bland romantic comedy, but it should not take stealing ideas and whole events from something far superior to save a series. It is nothing more than fan-fiction; for the most part, it is up to the characters to give this series even the slightest hint of integrity. 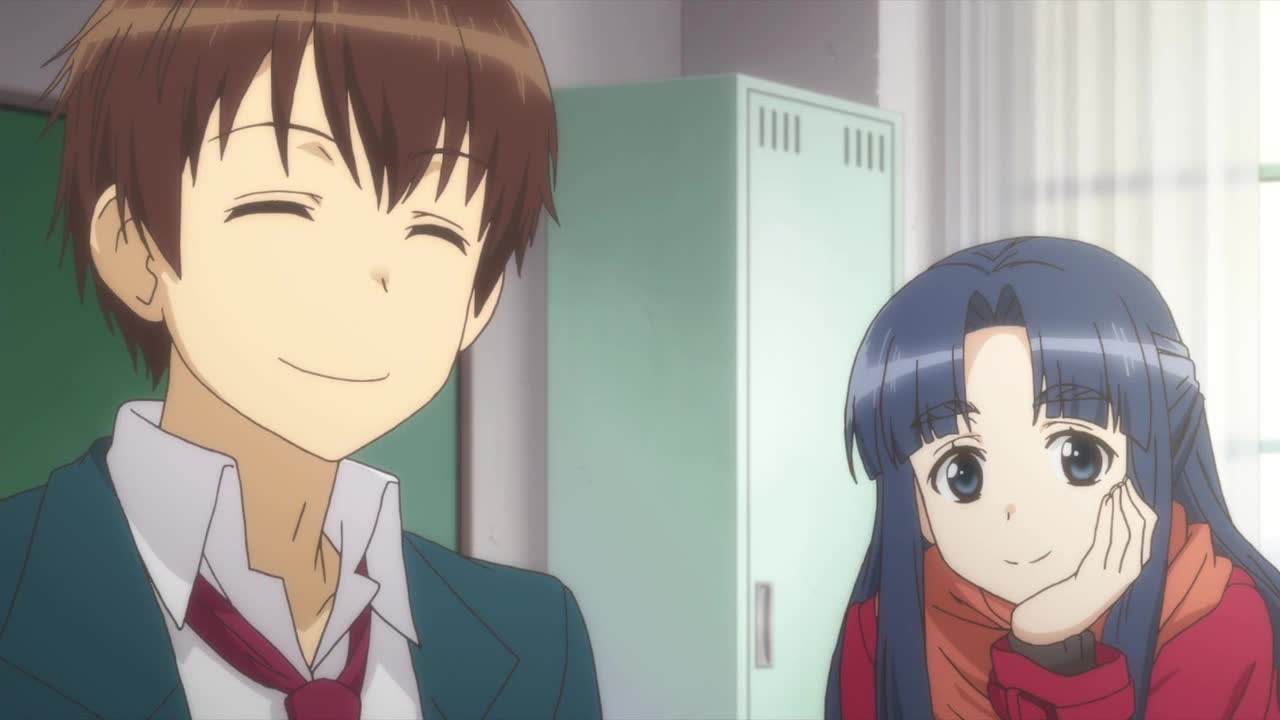 The characterisation of three of the main characters is particularly disappointing, including that of Yuki Nagato. This version of her character is shy and awkward, and she spends more time playing video games than reading books. Yuki wants to get close to Kyon, whom she has developed feelings for, but they only end up physically close due to contrived circumstances that only occur because the writers repeatedly insist that Kyon is just generally a nice person. However, this version of Kyon is just a watered-down version of the real Kyon. Bafflingly, he now has a terrible memory. Anyone familiar with the original series will know that Kyon’s memory is impeccable, yet Puyo does not seem to actually understand the characters he is ripping off. The one thing he does well regarding Kyon is depicting him as nervous and confused after one particular event. Kyon does have emotions, so it is good to see them being explored. Unfortunately, Mikuru Asahina’s characterisation is downright insulting; she is relegated to the role of ‘moe blob’. She serves absolutely no purpose whatsoever. Even though there are no actual aliens, time travelers or ESPers in this fan-fiction, she should not be forced to deal with repeated sexual harassment from Haruhi and Tsuruya. What is truly incomprehensible is every scene featuring her in the final episode; what purpose could Mikuru getting ridiculously excited about a blender possibly serve? They may not be the same characters from the original world, but Mikuru, Tsuruya and Kyon in Puyo’s story are all nothing more than poor imitations of those from even the alternate world. Taniguchi and Kunikida are roughly the same, however, and some of the changes in characterisation are actually effective. 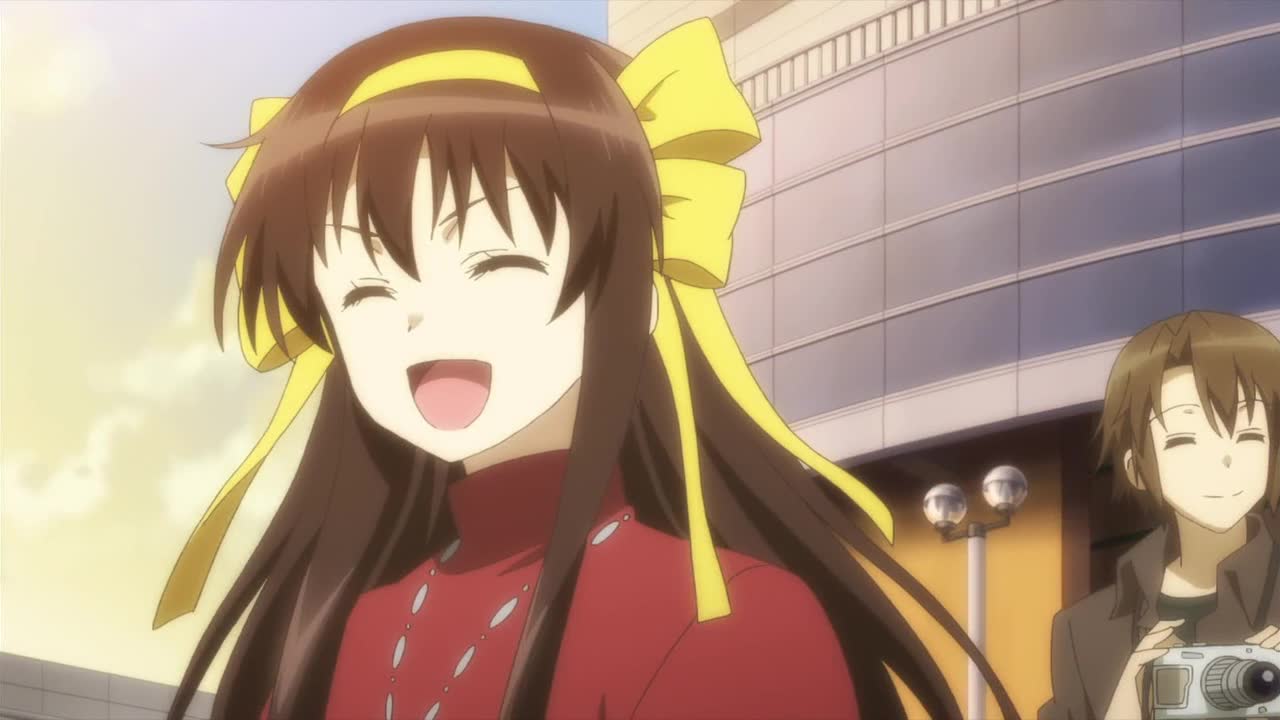 Two characters go through interesting character development. Haruhi is shown to have an emotional and reflective side in some scenes, which is caused by Kyon of all people. She even gives good advice to others on multiple occasions. Asakura’s development is perhaps even more significant than Haruhi’s. She is annoying in several scenes, at one point literally holding Tsuruya and Haruhi back just because she disagrees with their idea of fun, but she ends up being a surprisingly well-developed character later on. She is thoughtful and considerate, if overly-protective, when it comes to Yuki. She shows the capacity for positive emotions and introspection, making her one of the better characters in this otherwise unoriginal fan-fiction. Koizumi is hard to figure out, though; it seems as if Puyo thinks he is attracted to Kyon, yet is also happy being Haruhi’s lackey. The positive character development is only given out selectively at best.

The title of the series does not start making sense until episode 10, given that these characters are entirely unaware of and disconnected from the original world. Following an incident that causes Yuki to suffer from some kind of poorly-explained trauma, the consciousness of the moe Yuki is buried by a mostly-silent Yuki similar to the one in Tanigawa’s alternate world. Asakura has a hard time accepting the new Yuki, but this ends up causing her to go through the strongest character development she will ever receive. These episodes present what this whole series should have been: a focus on the silent Yuki’s feelings. It seems as if Puyo was inspired by Golden Time in regard to Yuki’s mental battle in this arc. After the first episode of this arc, it even manages to be rather engaging. Kyon’s part in this story, which becomes the main focus of the series once this arc is over, eventually comes to a resolution. Unfortunately, the moe Yuki’s feelings are not explored further, drawing attention to the lack of consistent direction and purpose in this story. 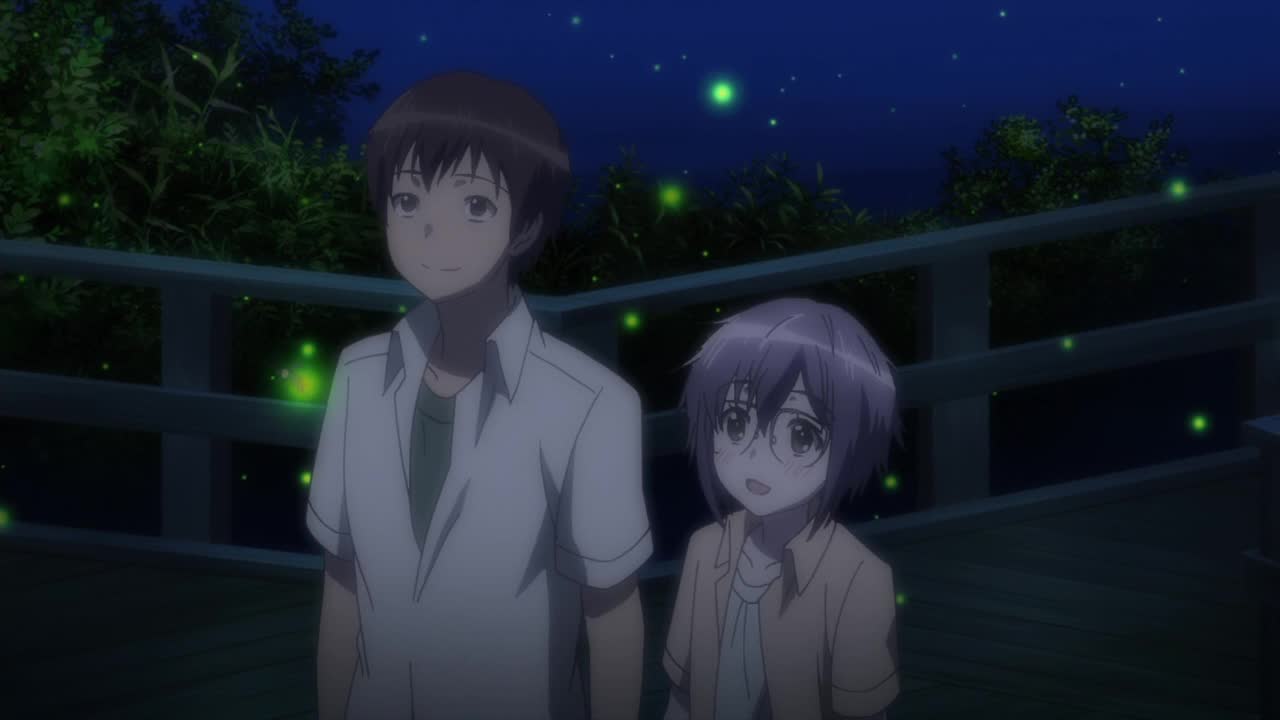 This may not be the third season of The Melancholy of Haruhi Suzumiya that we want from Kyoto Animation, but Satelight does not do too badly. Most of the character designs look somewhat like the originals, most of the time, at least. Haruhi occasionally appears rather off-model, and Yuki is noticeably different. It seems that she is meant to come across as moe visually as well as mentally. This does not work as well as it could have. It is extremely disappointing that Tsuruya is groping Mikuru’s breasts in the opening animation sequence used in episodes 2-16 and the OVA, and that she does the same with Haruhi as an accomplice in an episode set in a hot spring. Fan-service is otherwise limited to non-explicit shots of characters taking their clothes off, which would be mostly harmless if not for the embarrassment it causes Yuki. The animation can be fluid at times, but it only occasionally comes across as visually appealing. It does not even come close to the level of quality in Kyoto Animation’s adaptations. The static effects in the ‘Disappearance’ arc are considered by some to be one of the better visual features of this adaptation, but take that as you will.

The audio is the best part of this adaptation. The background music is great and very well-suited to the atmosphere of the series, and it seems to kick up a gear in the ‘Disappearance’ arc. The only disappointing thing about the music is that half of it is made up of arrangements of Satoru Kousaki’s music. Said music is excellent and fits perfectly when it is used here, but it would have been better if Tatsuya Katou had demonstrated more of his abilities to compose original music. The opening theme song seems to be trying to recapture the feeling of the songs from the first season of the Melancholy of Haruhi Suzumiya anime adaptation, and it is not entirely bad. The ending song is pleasant to listen to, but the main thing to pay attention to is the lyrics of both songs. These lyrics accurately summarise the only real plot featured in this series. 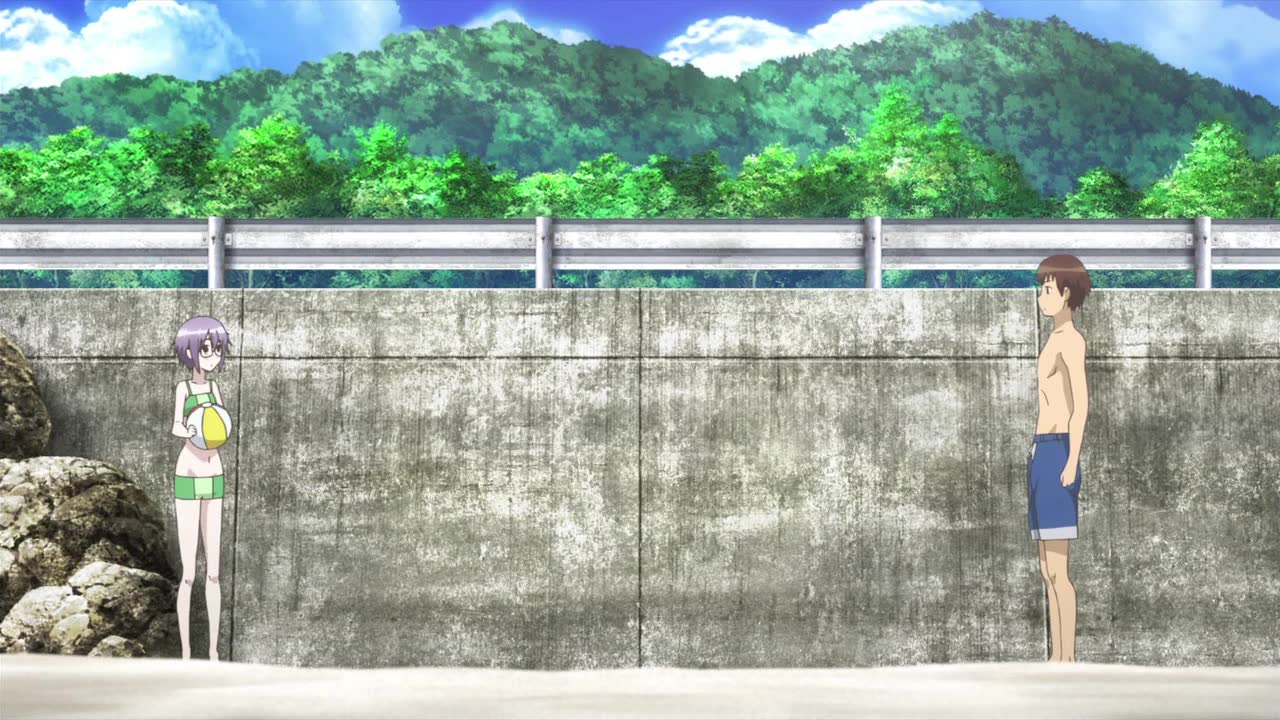 The original voice actors reprise their roles in both the Japanese version and the English dub. The Japanese voice actors all do a fantastic job, as do the voice actors in the English version. The only difference is the way Yuki sounds in the English dub. The moe Yuki just does not sound right, but this might have something to do with Puyo’s characterisation. She does sound more normal in the ‘Disappearance’ arc, though. The main positive thing that stands out is the way that Kyon reacts at the end of the ‘Disappearance’ arc. His voice actor has to be quite emotive in these scenes, and both his Japanese and English voice actor do an excellent job.

Included on the third disc are the TV spots, DVD and Blu-ray promo, the textless opening and ending animation sequences and the subtitled-only OVA episode “I Cannot Let Summer Break End”. It contains 20 minutes of Kyon procrastinating instead of doing his homework, and the only meaningful scene in the entire episode occurs right at the very end. The episode is entertaining, but it should have been used to explore the relationship between Kyon and Yuki instead of referencing “Endless Eight” for the third time. 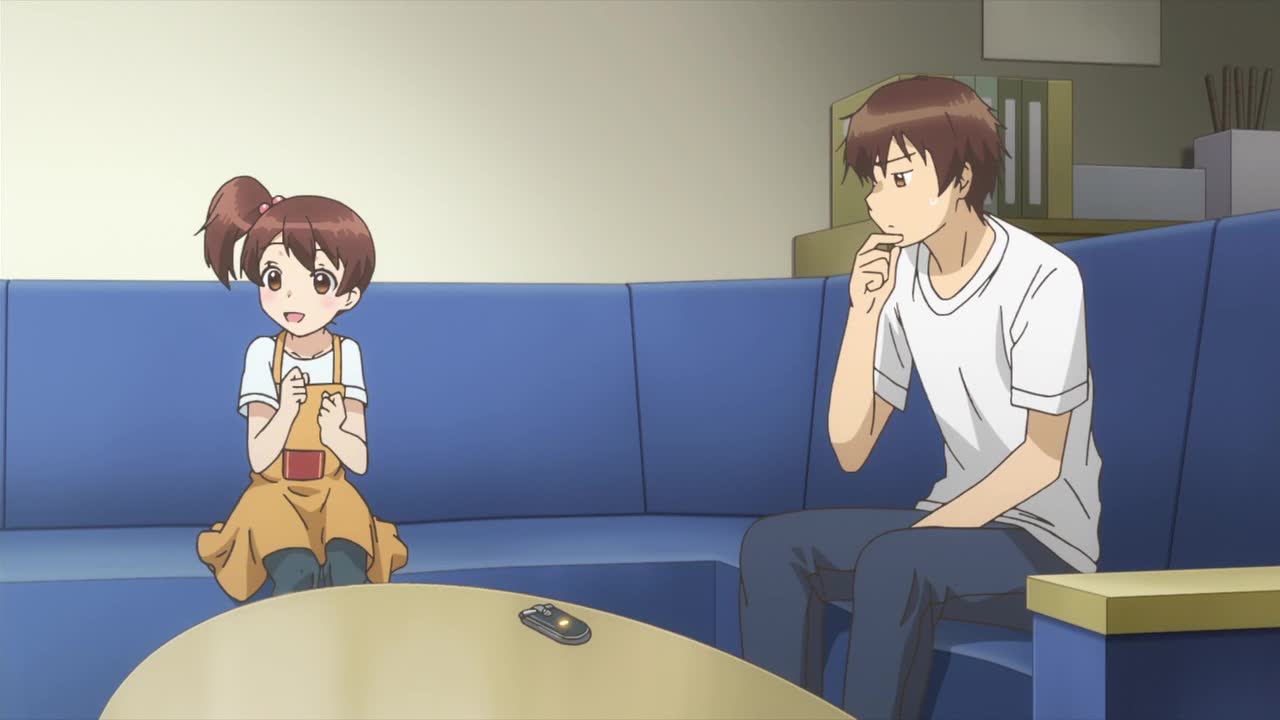 This is not a dreadfully bad piece of fan-fiction. In fact, it can be surprisingly interesting at times. It just happens to feature a significant lack of originality and poor characterisation. If you have seen the film adaptation of or read The Disappearance of Haruhi Suzumiya, you may enjoy this as an alternate ‘what if’ story. The character of Ryoko Asakura is surprisingly well-rounded, and the ‘Disappearance’ arc that gives this spin-off its name turns out to be a great piece of storytelling, despite Puyo using a personality disorder in a very contrived manner as its basis. If you are intrigued by the idea of Golden Time meets The Melancholy of Haruhi Suzumiya meets School Rumble, consider checking The Disappearance of Nagato Yuki-chan out, even if only for a quarter of its episodes.
Capsule Computers review guidelines can be found here

A promising but mostly unoriginal piece of fan-fiction that does at least present some of the characters in a new light.
5.5