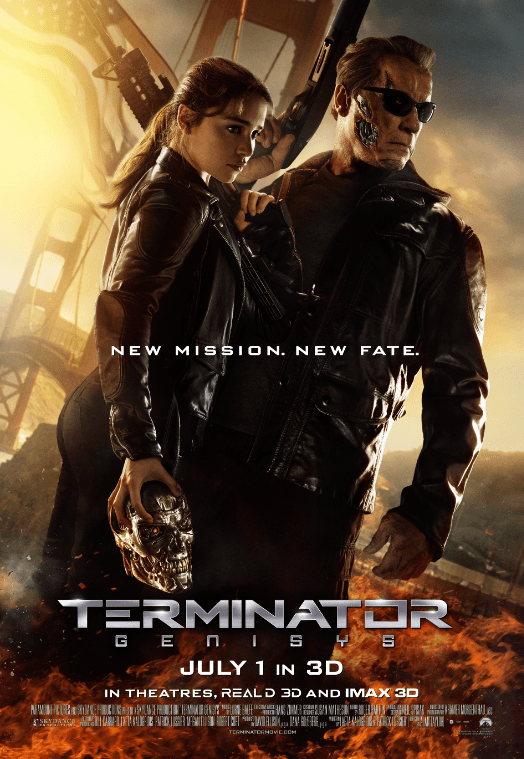 Let’s travel back to the future, through the present and into the unknown. The Terminator franchise has no limits and the fifth installment, Terminator Genisys proves to be no different. However, this time we are under the wings of director, Alan Taylor and a new stunning cast; Emilia Clarke, Jason Clarke and Jai Courtney. With the obsolete force back to terminate, Arnold Schwarzenegger, is it possible that Genisys will revolutionise the events from the original Terminator? 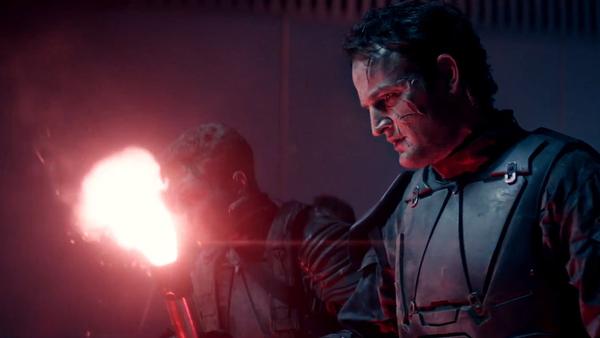 The voice of Kyle Reese (Jai Courtney) eases viewers into the beginning of the film, a time before his existence and Judgement Day. Skynet is at the frontline of warfare, a computer programming directive that is responsible for destroying the universe and exterminating the human race on August 29th, 1997. The nuclear explosion kills three billion people, and gives rise to the machines to take over the world. During the war, Kyle is brought into the broken world and is forced to grow up alone, without his parents. It is the leader of the human Resistance, John Connor (Jason Clarke), who protects Kyle and brings him into the Tech-Com facility of his mission.

In 2029, the Resistance declares an attack on Skynet’s main defense grid and the Colorado Unit are successful in overtaking the system. But a tactical weapon was sent out to protect the future of Skynet, the T-800 is going back to 1984 to kill Sarah Connor (Emilia Clarke) and erase the life of her son, John Connor. Out of respect and honour for his saviour, Kyle volunteers to travel back in time to save Sarah. Unaware of the consequences of entering the time machine, the future timelines shift and Kyle glimpses into the year 2017 and has a vision of his alternate fate.

During the time travelling scene, the audience are drawn to the surprise appearance of Matt Smith, best known as the Eleventh Doctor from the Doctor Who BBC Series. The mystery man approaches John from behind and attacks him, when Kyle is in the time machine and close to fading away. This event is mind-boggling to say the least, but a key element that is developed further into the film. 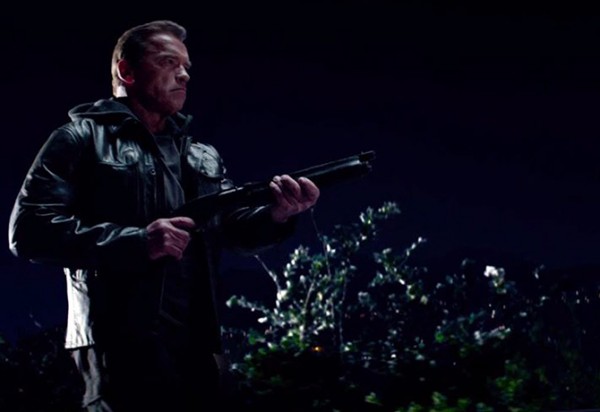 The real terminator action kicks off in Los Angeles on May 12th, 1984. The visibly younger, T-800 is challenged by the an ageing T-800, reprogrammed as ‘Guardian’ to protect Sarah. It doesn’t take long for the indestructible team, Sarah and Guardian to tear apart the Terminator Assassin. Meanwhile, Kyle is faced with the T-1000 in a general clothing store. The deadlier model, similar to the one in Judgement Day, is made of liquid metal and can form razor sharp knives for arms. Unfortunately for Kyle, two police officers arrest him for breaking and entering, endangering their own lives in the process. At this point in time, the storylines intertwine when Sarah and Guardian pick up the soldier and leave behind the officer, O’Brien (J.K. Simmons).

As the mission changes, the characters relationships become stronger and more revealing. The audience become more understanding of the Guardian’s fatherly role as “pops” in Sarah’s life. Whereas, the pre-ordained feelings that Sarah has for Kyle changes overtime, and becomes one of choice. By travelling together to 2017, Sarah puts her trust into Kyle’s vision that the only way to destroy Skynet is to prevent it from launching. Needless to say, Guardian is skeptical about leaving Sarah with the newcomer, but has no choice as the injury he sustained in the sewers needs time to regenerate his arm. 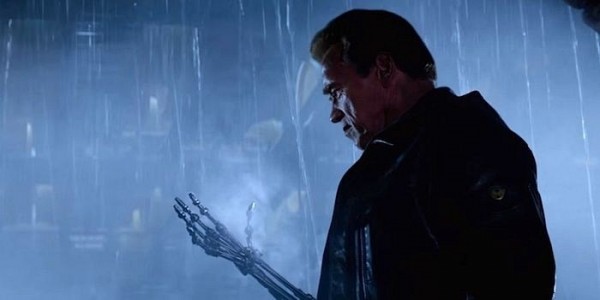 The pair arrive stark naked in the middle of a freeway in San Francisco, 2017 (yep, travelling through time requires not wearing any clothes). Sarah and Kyle are arrested for indecent exposure, and have trouble explaining who they are without any evidence of identification. While they are held in custody for homeland security to question them, John comes in the nick of time to lead them to safety. With it being a different timeline, there is something noticeably different about Sarah’s son and his urgency to and take them to Skynet.

I’ll have to stop myself here, from spoiling the ending.

With the vast amount of time travel in Terminator Genisys, it is imperative that each timeline is presented with the utmost accuracy; including detail in the atmosphere, scenery and lighting. Thanks to the incredible work of Cinematographer, Kramer Morgenthau and Production Designer, Neil Spisak, the team seamlessly captured the roaring 1980’s from the original film and created a hauntingly authentic post-apocalyptic Future War.

The most visually appealing sequence in the film, is the 3D deathmatch between the eerily young, T-800 and the older T-800. The double vision sensation that came from seeing two Arnie’s battling on screen, was incredible to watch. It’s fair to say that Terminator Genisys would not feel the same without Arnold Schwarzenegger, the iconic figure is the largest and greater part of the franchise. By the end of the movie, it’s hard to forget the hilariously terrifying and adorable smile that Arnold brings to his character. 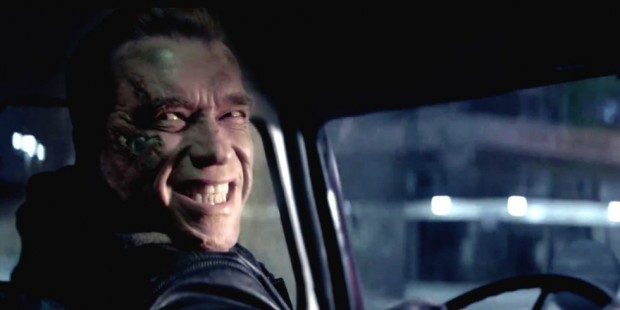 Lorne Balfe produces a powerful original score, that reignites the struggle of rising and creating change in a doomed world. The main theme in Terminator Genisys composed by Lorne, is suitably titled ‘Fate and Hope’. Famous for his compositions with Hans Zimmer for Inception, Lorne boldly reawakens the franchise in his soundtrack with his own ‘musical terminator’.

A memorable song from the film, although only featured briefly, is Inner Circle’s ‘Bad Boys’. The chorus plays during a solo photo montage of each of the criminals, Kyle, Sarah and Guardian. The trio were caught on a bridge in San Francisco in 2017, after causing a large-scale traffic accident. The bad-ass scene involved Guardian’s head smashing through a police car windshield, and a bus tipping over the bridge, with Sarah, Kyle and John inside. 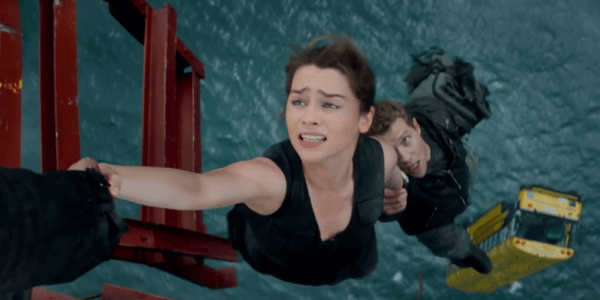 Terminator Genisys is an impressive movie on its own accord, that delivers on intense action, sufficient comedy, gripping 3D visual effects and an engaging storyline. If you haven’t watched all of the previous Terminator films, do not let that deter you from seeing the fifth installation. Based on the ‘Reset the Past’ tagline from Terminator Genisys , one could even go as far to say that the events from Terminator 2: Judgement Day and beyond cease to exist . . . but let’s not get ahead of ourselves. Director Alan Taylor, gives fans a justifying close in the latest film and opens the door for further speculation. Of course, the original Terminator can never be replaced – but it can be revolutionised!