T-80 Darts, developed by French studio MKO Games, is a game that plays exactly as advertised by its name. Is this iOS conversion of the popular bar-side passtime a successful recreation, or has the bar closed early for T-80 Darts? 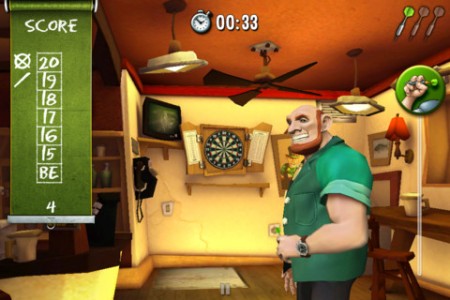 The controls behind T-80 Darts are simple – you slide the aim-slider down with one finger, and then tilt your iOS device to aim the shot at your preffered target on the dartboard. This control scheme really gets the best out of the iOS systems, and it’s surprisingly easy to pick up and play.

The rules of the standard game modes are the same as those in a regular game of darts. Players start with a score of either 301, 501, or 701 points and must then aim to lower the number down to zero in as few moves as possible. That’s achieved by aiming for higher scoring areas of the dartboard, particularly the bullseye, which is worth 50 points. Of course, each point-zone on the dartboard has narrow strips which, if you hit, will reward you with double or triple points.

There are two additional, more interesting takes on the typical dartboard gameplay as well: Around the Clock asks you to hit each of the numbers on the dartboard in order, increasing from 1 to 20, and then to finish it off with a bullseye. Cricket demands that players only hit numbers between 15 and 20, and also the bullseye, and they must do so three times on each to close out the game. Hitting the double or triple sections will close out numbers more quickly.

T-80 Darts features Game Center functionality so that scores can be uploaded onto shared leaderboards. These scores are based on how much time it takes you to finish off a round of whatever mode you’re playing. There’s also a versus mode that allows you and a friend to take turns against each other in any of the game modes. 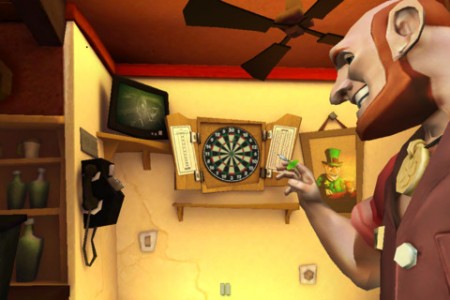 There’s no question that the game is a great darts experience that fully takes advantage of the tilt and touch capabilities of iOS devices, but the fact that it’s so simple to use means that the game gets quite easy after a bit of practice. I found myself repeatedly lining up bullseyes, and while it feels good to look like a darts professional, different difficulty levels would have been appreciated. Hell, if players should elect to up the challenge, do so by making the on-screen dart thrower become comically inebriated, and thus his vision blurs and the aiming reticule expands and moves less accurately.

Graphically, the game brings something a little unique to the iOS marketplace in that it’s not two-dimensional, and doesn’t look like a cartoon. Rather, the three-dimensional pub in which the game is set is buzzing with detail, has a window you can actually see out of into a snowy street, and just generally gives off the atmosphere you’d feel in a small Irish pub.

The music also complements this Irish feel to the locale, with cheery tunes that would make a leprechaun dance. There’s a good thud when a dart hits the board, and a strangely, French-accented woman calls out the number of points you’ve scored.

In fact, it’s quite ironic that a French developer nailed the ambiance of an Irish pub so well, only to have it slightly jarred by the voice work. But, in my humble male opinion, there are few things better than listening to a French woman while hanging in an Irish bar. So I’ll happily accept the incongruence. 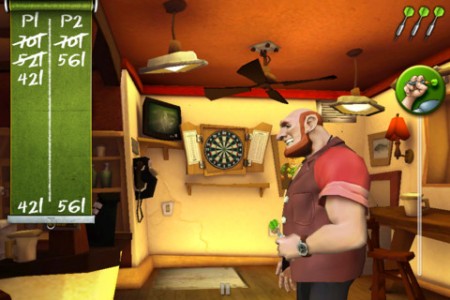 T-80 Darts is a game that succesfully condenses the essence of playing darts in a bar and puts it into a well-presented game. Its simple controls get the better of it, as it’s slightly to easy to master, but you’ll find that in short bursts, the game will keep you coming back because of those same simple controls and the charming ambiance. If you’ve got five minutes to kill, T-80 Darts provides good fun that’s easy to jump in and out of.

And it doesn’t have cutesy, small mammals or fuzzy avian bombardments.