Did anyone ever watch Robotech? I’m going to assume yes as it is not only quintessential Anime viewing for Otaku, but it is also essential viewing for anyone that has ever lived in this lifetime. How many of you wanted to be a variatech pilot? I’m guessing everyone ever. One minute you’re this kick-ass jet and then the next you’re a giant robot shooting up the place. Strike Suit Zero, I believe, is rather analogous to the Robotech franchise in that it’s set in space, features a transforming robot jet-fighter and has a multitude of space battles. But does that make this game fun? Read on to see my thoughts on the game.

You play as the Earth pilot Adams in a war between the Earth and the Space Colonists that desire independence (sounds like Gundam, I swear this game is Anime inspired to the core). One day someone discovers an Artificial Intelligence named Control and a secret research organisation from the Earth forces begin research on it. After a while this Control takes a human host and designs the Strike Suit, the leading mecha-fighter featured in the title of the game. 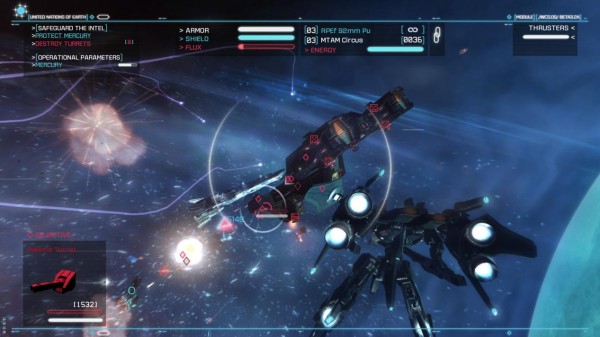 In Strike Suit Zero, the storyline isn’t particularly anything difficult to follow as it primarily serves as a way to introduce a player to the mission that they’re undertaking, as well as providing some hints or background to the war that you’re fighting in. Usually you experience the story through in game dialogue before and after a mission, and sometimes in between checkpoints. However at points during the game, there are these cool cutscenes that resemble a motion comic in a way and have they have some pretty cool narration.

While the games storyline isn’t particularly challenging to the players mind, it is still pretty interesting when you start to uncover more and more information behind the Strike Suit and the Control A.I. character. I feel that for a game that’s paced as it is, the storyline works and never really leaves the player hanging. I think the developers knew the kind of game that they were making and as a result, weren’t inclined to make this a grand space opera with side switching, larger than life villains and the like. It’s a space-battle game and its storyline reflects that.

This is truly the bast part of the Strike Suit Zero experience. There is so much to talk about when it comes to the gameplay that its going to be pretty hard to talk about everything, so we’ll see how we go with this section. 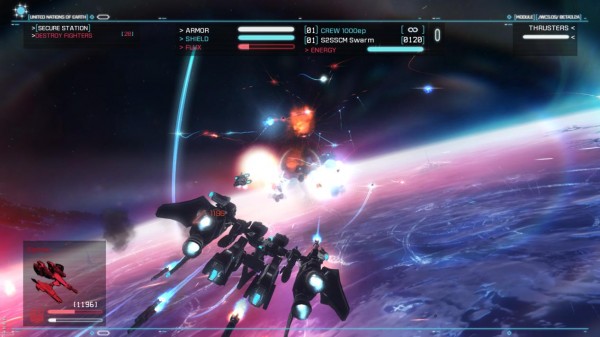 The first thing I want to talk about is the games controls. What I really loved about Strike Suit Zero is that you can play the game the way you like. For example, if you’re a keyboard and mouse gamer, you can play it fine with the keyboard and mouse (actually it’s easier aiming the plasma weapons with a mouse, even with auto-aim enabled). It also supports controllers (I played with an Xbox 360 controller, most predominantly) and joysticks. The one thing that I found tricky with the controls though, was rebinding everything to my liking. It’s not that the default control schemes are bad (they’re really good), it’s just that I have preferences for some games. For instance, it was really unclear as to how to rebind each stick for the X360 controller and what each of the options do. I found that hitting the B button clears the stick selections and I think I disabled two of them to get things to read properly. You can also double bind some buttons, making accelerate and thrust the same button so you don’t have to keep your throttle up for a quick boost of speed.

So basically this game is a space combat game, this is not primarily, this is not your grandpas space trading sim with spreadsheets and automated drones, it’s a combat game. If i had to liken it to anything, I’d say that it was similar to Star Wars and Wing Commander games, but in the third person (there is first-person views, but no cockpits). A mission will generally see you battling enemy craft, destroying stations and assisting in the destruction of corvettes and capital ships. What makes this interesting is that each mission is something that you’re ranked on. Sure you can finish a mission and advance just by completing the level, but really, you want to be hitting those high scores.

Initially, when you start playing, you may find yourself overwhelmed on how to best approach a fight. Should you commit to a battle with your plasma cannons, is it best to hit that group with your Strike Suit’s Over Powered missiles? Should you do missile runs over corvettes or shoot at them from a distance? None of these are correct or incorrect, but how you play is important. For instance, sitting directly on top of a Cruiser while you’re in your Strike Suits mecha-mode will probably get you killed, however sitting on top of it from just outside its effective range and gunning it down with missiles might work better for you. 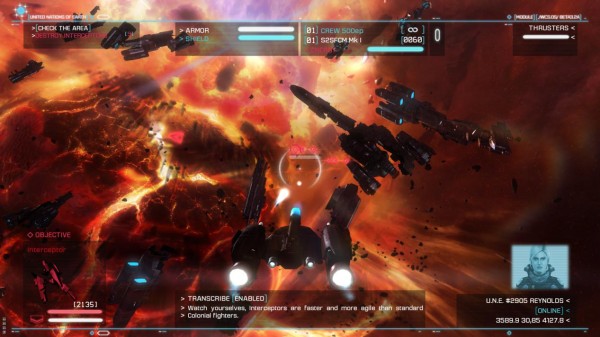 When I first started with this game, I would pretty much just charge into every fight and then get killed. While this was usually not the case with the regular fighters, this would almost always happen with anything bigger. It wasn’t until I started playing a little more smart, selecting the right turrets to knock out, combining different tactics for different situations and the like, that I really started – – not only surviving – – but seeing much better scores. And let me tell you, this game really rewards clever playing. This could be with weapon upgrades, suit enhancements and even additional ships (most of which can’t transform but have their own advantages. And hey, do well enough and you can have a nice spot on the online leaderboards too (I currently hold a few ranks on there, probably not for long after release though…).

As a game that rewards smart play and being difficult enough to keep you interested, I find that Strike Suit Zero is an incredibly well designed game from a gameplay perspective. I’m having a lot of fun with this and will continue to do so in the future.

Strike Suit Zero features a really nice visual aesthetics that I can’t help but liken to a western design meeting an Anime feel. This is something that is noticeable down to the core of the game. For instance, have you ever seen a space Anime series? If you have, some of the Earth capital ships (like the Aurora, IIRC) look like they were inspired heavily by some of the more modern designs found in Anime. 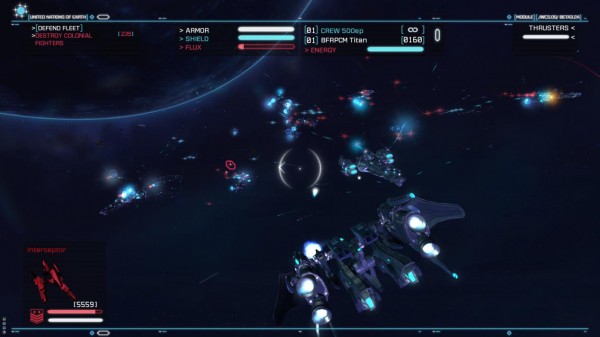 I particular like how the designs contrast with the art style though. Everything in this game is clearly drawn in a much more realistic western style than its designs would otherwise indicate. All of the characters and the way the cutscenes are done are much more reminiscent of the realism that western works tend to strive for (especially in comics). I feel that Strike Suit Zero is a game that is visually inspired by so many different kinds of works that it has combined them all into this unique look that is reminiscent of many things but comparable to them only slightly.

It’s a very unique look that suits the game incredibly well. The art team deserves some kind of award for their efforts.

Outside of one particular track in this game, I quite enjoyed the games soundtrack. The theme that plays in the menu is very reminiscent of the kind of thing you’d expect to hear in a game set in space. Actually, it’s incredibly reminiscent of the menu theme from Freelancer, if anyone ever played that. 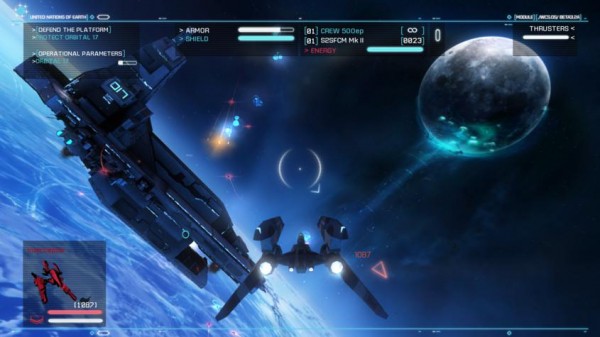 I like the way that the silence of space is reflected in the games audio whenever you’re not in a combat section of a mission and then when you are, a more fitting combat tune is slipped into the mix. It sounds like a space combat game, and that’s incredibly important for a title like this.

It also features a fully voiced campaign, with all of the characters within the game having their lines spoken. Out of all the voice actors in the game, I think I may have only recognised one of them, but I might be wrong. Having a non all-star cast was a good choice I think as a voices fame doesn’t detract from the character in any way.

Overall Strike Suit Zero was incredibly fun to play and it’s definitely something that I’m going to continue to play. On the whole, this is a game that will appeal majorly to Mecha fans and Space Combat and Dog-fighting fans, while others may find a reason to love the genre with this title.