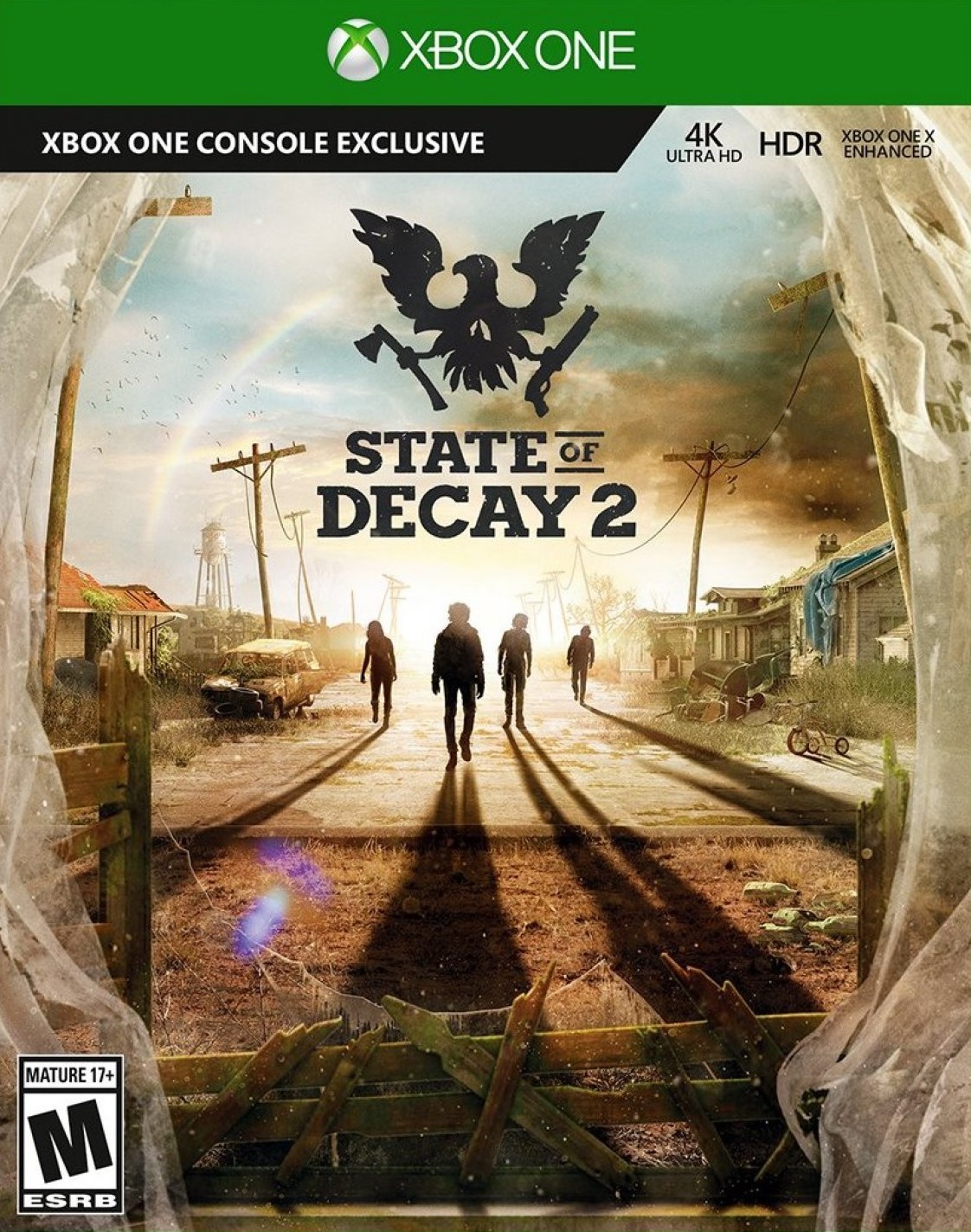 Undead Labs managed to tap into something special within the zombie survival series back when they released State of Decay on the Xbox 360. So much in fact that it felt like a breath of fresh air in what was a swarm of undead games back at the time and now they have returned once again with a sequel to the first series. With an HD re-release of the original already available on the Xbox One, is State of Decay 2 worth picking up?

Unlike the first game that had a somewhat barebones element of a storyline, State of Decay 2 focuses more on the random elements that can occur while surviving a zombie apocalypse. From the standard start of the game players can select from four pairs of survivors who have their own backstories and skills as they travel to a military base seeking shelter, medicine, and food only to find that the base has already fallen to the undead. 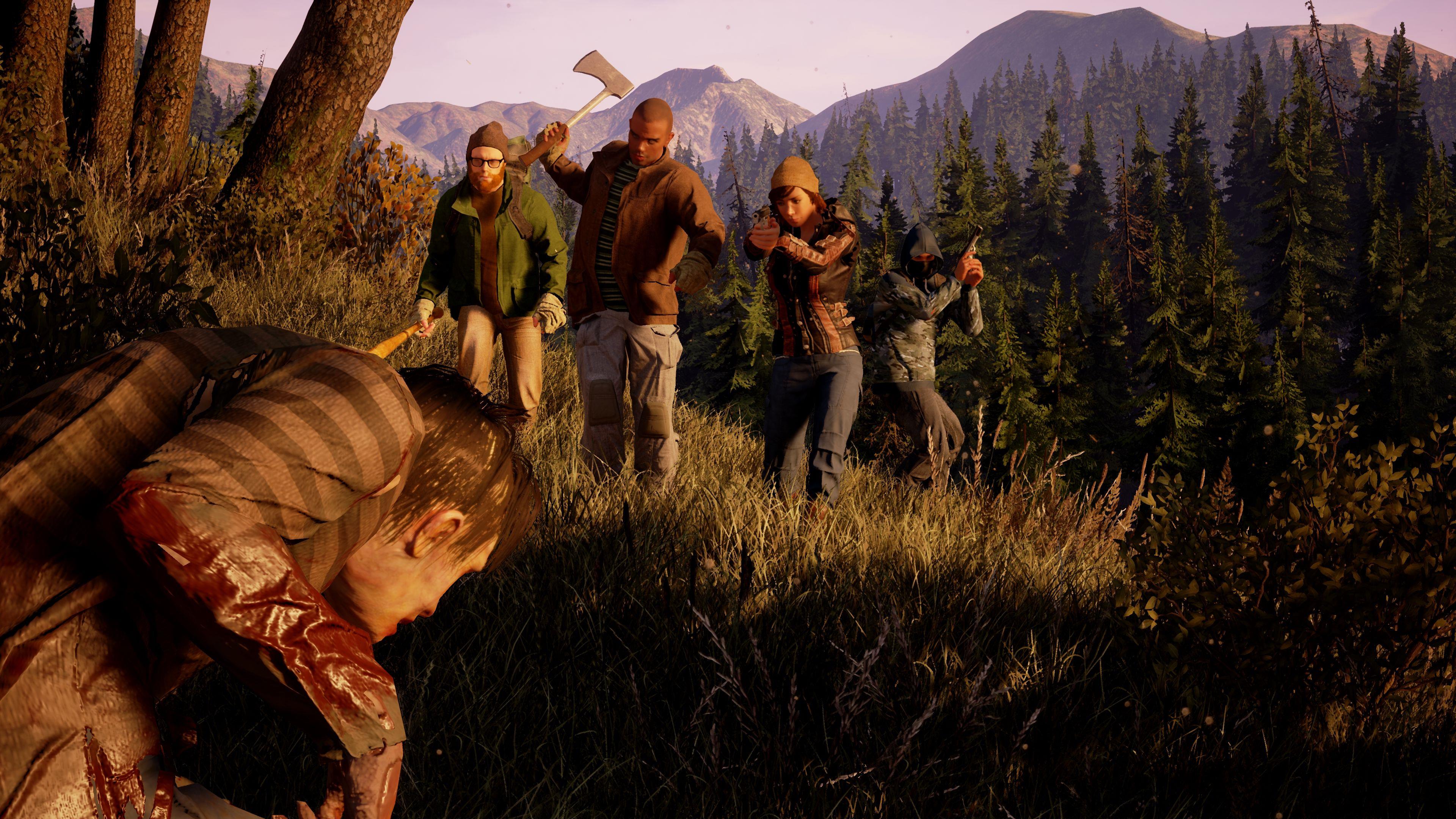 All is not lost however as a capable soldier and a experienced doctor have stayed behind and are more than willing to help out your pair. This is a bigger boon than one may initially think as your partner quickly is infected with the brand new “blood plague” that is always fatal, only this doctor has managed to learn a way to cure the disease. Joining with this pair, your small group of survivors finds themselves on the road with three choices of locales and a hope for survival.

State of Decay 2’s plot is incredibly basic to the point that it barely even exists. This is probably due to the fact that players now can choose to start the game with a randomly generated group of survivors or bring in previous survivors if they so choose rather than run through with the pre-set groups that can still be varied as the doctor and soldiers can vary between genders, names, and skills. While this makes for an experience that is more unique in subsequent playthroughs, it also leaves players with very little to actually progress towards outside of standard survival and hunting down plague hearts and completing a character’s randomly spawned missions. 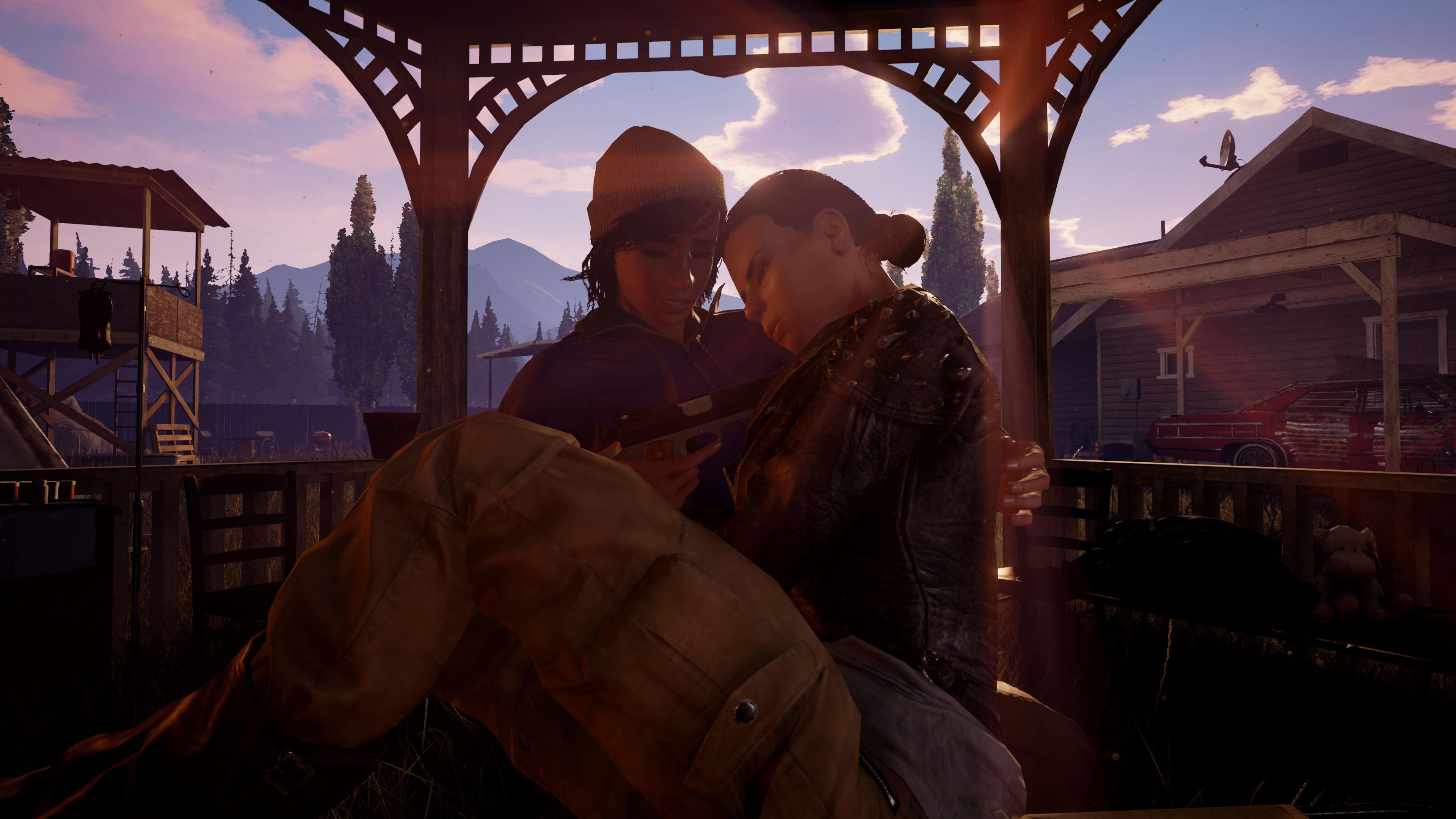 Unfortunately these character missions can glitch rather frequently, either not triggering when swapping to that character, vanishing randomly with plenty of time left to complete said mission, and often occur at inappropriate times, occasionally locking players to a character that is either incredibly tired, injured, or even sick unless they opt out of the mission entirely to swap to a fresh character from their group of survivors.

Very much like the first game State of Decay 2 will require players to focus on two different fronts while playing the game. With players starting out with a small group of survivors setting into a relatively small and broken down house one of the first tasks they have to complete is repairing their safehouse and making sure that they are keeping their supplies up in an effort to keep everyone alive. This means making sure that you can gather enough food, ammunition, fuel, building resources, meds, and more to keep everyone happy since a higher morale at home can reward players with various bonuses, as well as build and maintain the various facilities that have been designed in your base of operations. 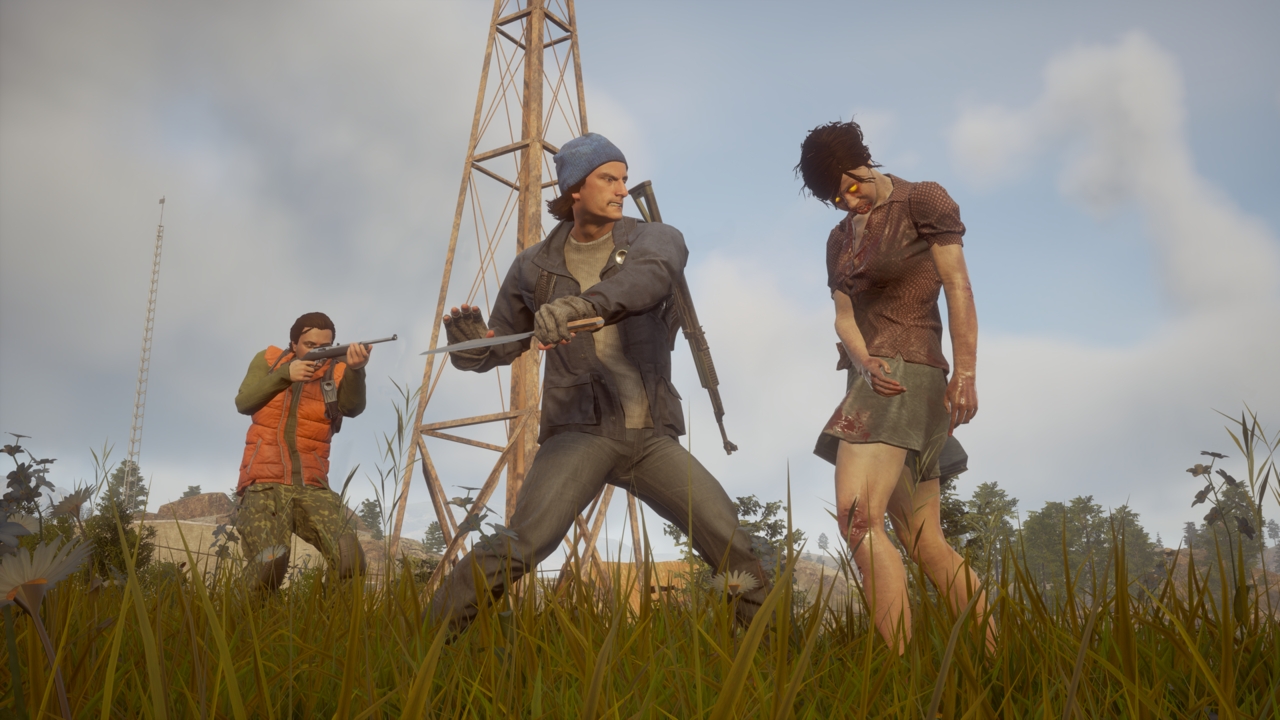 This means that most of your time in the game players will need to be on the move with a number of improvements made to the scavenging systems. If you aren’t playing with others in the game’s new co-op system that allows up to four players to play on a game at the same time, you can now ask a fellow member of your survivors to travel with you while scavenging the world, allowing players to carry twice as many resources (by swapping to that character when your previous one has filled up) and have an AI companion watching their back while looting or taking down a small group of zombies.

Another element that helps with scavenging is the fact that vehicles are now more than a mode of transportation and a great way to wipe out zombie hordes while holding your car doors open for a satisfying splat. Various vehicles now allow players to store supplies in their trunks, meaning that rucksacks of supplies, that any character can only carry one of, can now fill five or more slots in some vehicles allowing for trips into danger to last longer and often feel more rewarding in the long run. The downside is that not only do cars break down like before, they also require gasoline to run and if you run out, it’s time to start walking unless you’ve packed an extra gas can. This extra bit of management is worthwhile in a way as vehicles can quickly become a luxury that players will need to manage as they are far less frequent than the first entry and can now be repaired, and even upgraded, with various kits you can find on your scavenging runs. 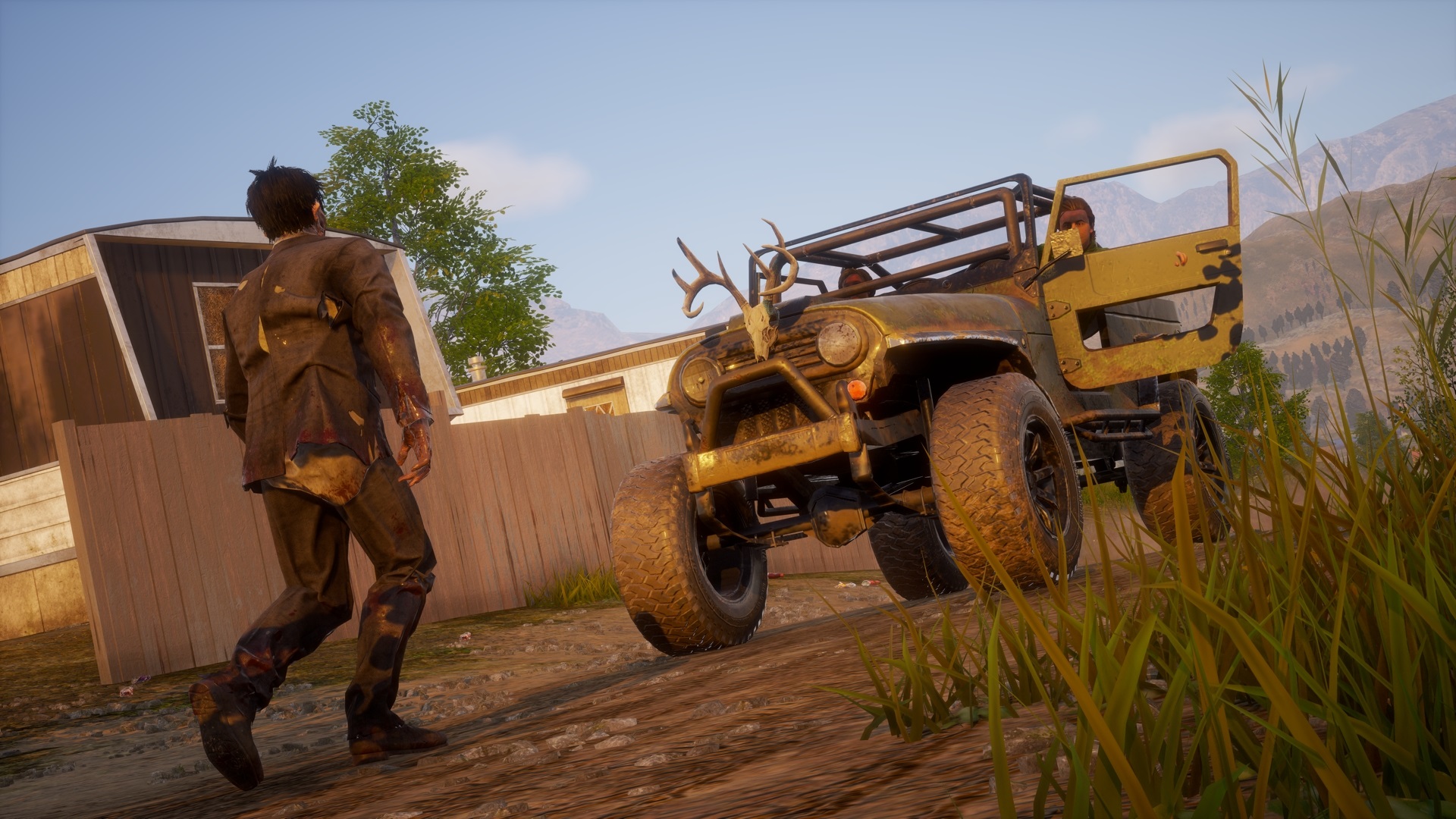 It is worth noting that while the risk of permanent death for members of your group is always a possibility, the actual threat of such an instance tends to be rather low unless you end up coming across a special zombie such as a Juggernaut, Feral, or forget what a Bloater does and happen to run into it with your car while being unprepared or take on a plague heart destruction. Wounded survivors can heal over time in an infirmary and even those that contract the blood plague can be cured if you have enough resources. In fact, unless you find yourself woefully undersupplied, your base can even defend itself against higher level hoard threats drawn in by noise caused by large groups of survivors, various facilities or modifications made to facilities, and other factors.

Combat is an easier affair as well thanks to players no longer needing to worry about their reputation when storing and gathering weaponry from their own bases as well as the fact that most weaponry seems to have a higher durability than before. Players will always carry a small knife or screwdriver on them for stealth-kills and last resort defense but for the most part fighting is done with whatever melee weapon you want to use at the time. Bladed weapons can slice zombies apart and deal large amounts of damage while blunt weapons can push back groups of enemies and last longer as a whole. With a weighty feel to combat and satisfying finishing blows that can be performed on downed zombies, the actual melee action is a blast when taking on small groups of zombies. Firearms and explosives also feel like they pack quite a punch though it is worth noting that using these can draw more zombies to your location, even if they tend to be the best way to take down plague hearts. 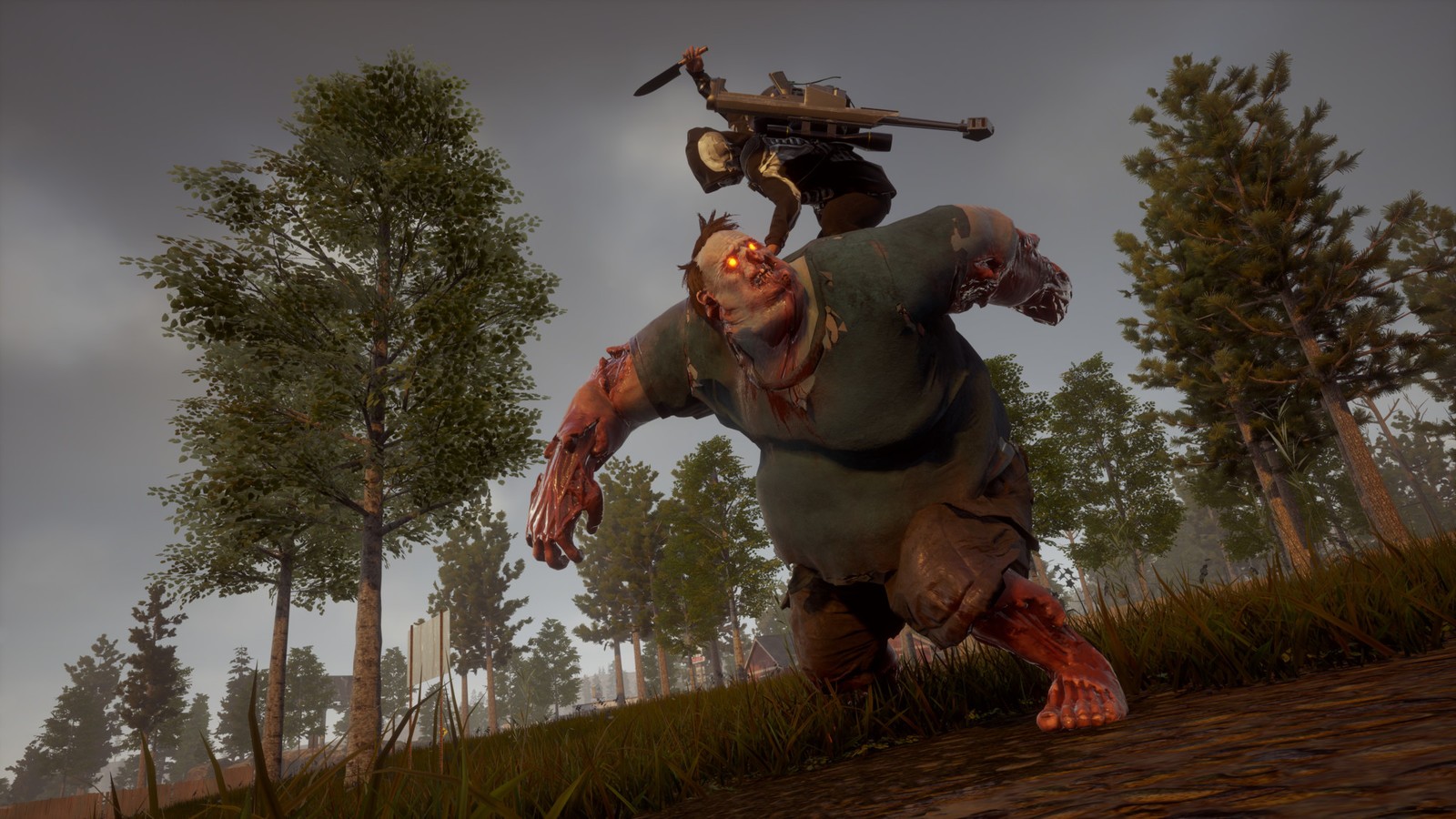 It is unfortunate however that despite how great combat can feel and the improved nature of scavenging for resources that the game does suffer a surprisingly large number of bugs. Even with the most recent patch for the game, a shockingly large number of issues will come into play even during a single gameplay session. Whether it is as simple, albeit annoying, as having your UI flicker constantly or miss entire words in descriptions to bothersome with environment objects spawning too late, causing a vehicular crash, to disastrous as your character and partner completely ignore a ladder they were meant to climb down and cripple both of them. These issues come into play far too often and are still a problem with the game as of the time of this writing and can quickly become annoying when various other bugs rear their heads to add to the frustration.

State of Decay 2 does see a noticeable improvement in the graphics department from the first game and thankfully moves away from the previous repetitiveness of the buildings you can scavenge through. There are a wide array of interior designs to search through while scavenging and for the most part the game runs at a fairly standard rate with only the occasional slowdown. That being said, zombies can and will spawn out of nowhere from time to time and make impossible leaps to attack cars and survivors. 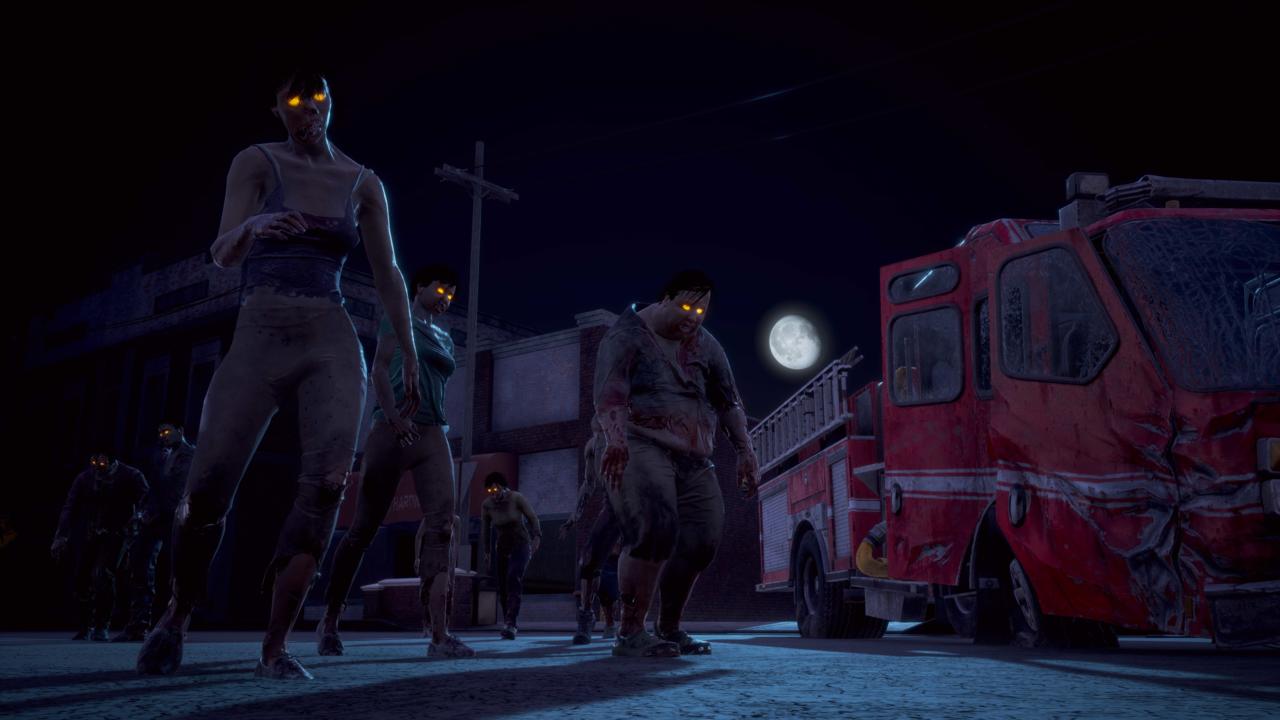 The game has an overall eerie feeling to the world with the way that the soundtrack and voice work has been handled. The quiet nature of the environment ruined by screams or groans of the undead makes for a great feeling of dread. The voice work is decent enough for the randomly generated characters though the best voice actors happen to come in the form of a friendly voice on the radio reporting on the state of the world and a familiar voice that fans of the first game will remember.

In many ways State of Decay 2 feels like a successful improvement over the original game. With combat still feeling as satisfying as ever and the scavenging systems being improved, the title feels like it will be a great survival experience. Unfortunately between a bland core story that focuses more on random events than anything else, buggy missions that stall progress or force players into dangerous situations without a choice, and numerous other issues, the game quickly falls apart despite its charms. That being said, co-op with friends does make this game an absolute blast to play but even then be prepared for plenty of frustrations.

State of Decay 2 makes some improvements over the original game but falls short due to its skeletal story structure and being riddled with a terrible amount of bugs that we can only hope will eventually be fixed.
6.5