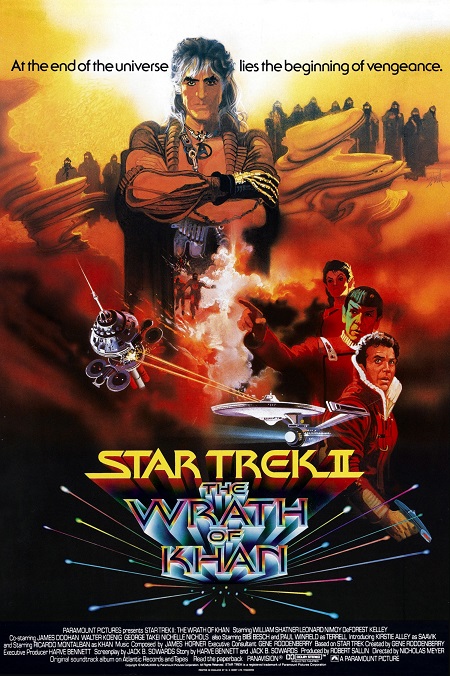 Star Trek is one of the touchstones of geek culture that everyone has some basic understanding of. In all likelihood you’ve probably heard about the amorous adventures of Captain Kirk, the logical Mr Spock, and the proudly Scottish ‘Scotty’. I have not watched the series religiously like some of my colleagues have, but I was certainly impressed with what I have seen. Among the spin-off films, The Wrath of Khan is considered to be a classic and has been referenced in from everything The Simpsons to Seinfeld. With this in mind, I beamed down to the In the House screening at George St cinemas and settled in to take tricorder readings. 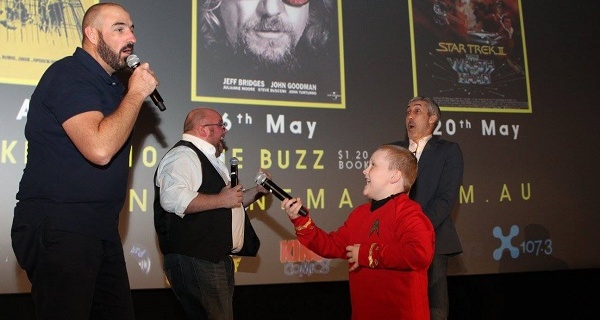 Jason ‘Jabba’ Davis and David ‘Quinny’ Quinn returned as the MCs for this evening’s screenings and boy did things get crazy fast. As per usual, the two MCs ran a game of ‘heads and tails’ with the audience with DVDs for prizes as well as reading out competition entries to hand out more prizes. At one point, a young child was given a microphone and got tongue-tied at the prospect of explaining why he was a fan of Star Trek. With the true spirit of a veteran MC, however, the child turned the tables and asked the question to Jabba who admitted he was more of a Star Wars fan (Boo!). Before he could ask anymore (damning) questions, the kid was given a round of applause by the audience and a Kung-fu Panda doll from the In the House organisers as he returned to his seat.

Jabba and Quinny then got into some of the nitty-gritty of the film’s trivia. One interesting aspect I wasn’t aware was that Khan was chosen to be a focused antagonist for the film, to make up for the perceived lack of one in the first Star Trek film. Apparently this decision may have borne fruit as the film went on to be a resounding success… or it might be the result of the fact that this was an ‘even’ numbered Star Trek film instalment and therefore avoided the malevolent influence of the ‘Star Trek curse’. 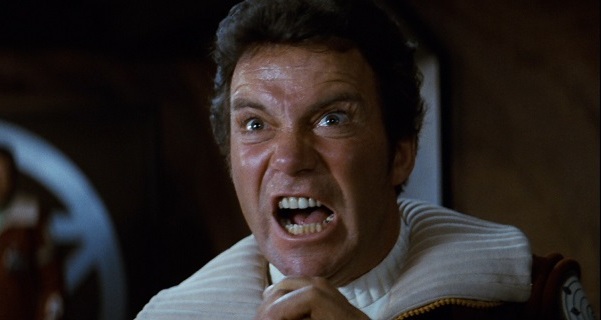 The film draws from the Space Seed episode of the original Star Trek series and I’ll give a brief overview. A genetic superhuman, Khan, is rescued by Kirk from a derelict vessel and promptly attempts to steal the Enterprise. It is revealed that Khan is an infamous individual from Earth’s history who fought as an egomaniacal warlord bent on global conquest during the ‘Eugenic Wars’. Kirk foils his plot and maroons him and his fellow superhumans on a harsh but habitable planet. Kirk reasons that Khan might pursue conquest of nature instead of civilisation so that his talents and ambition are not simply wasted.  Although it is not necessary to have seen the episode in question, you are certainly missing out on the full experience of the film if you haven’t at least got some understanding of the original Star Trek series. 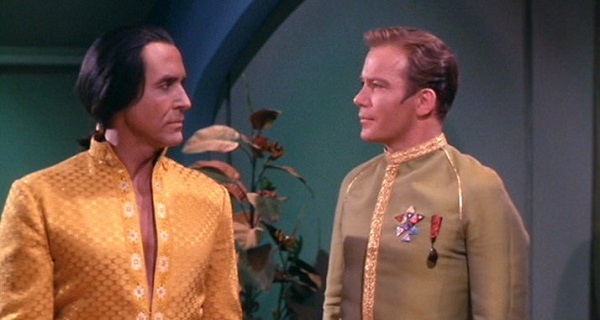 The film proper starts off 15 years after the events of Space Seed. We see most of the characters from the original series working as instructors at Starfleet’s academy, teaching new officers the ins and outs of being a space ship captain. Unfortunately for James Kirk (William Shatner), this life does not sit well with him and he chafes to get out into exploring the far reaches of space. Despite the best efforts of his friend, Leonard McCoy (DeForest Kelley), Kirk finds himself regretting his decision to accept a promotion to admiral and leave behind active duty. He gets his chance to return aboard the Enterprise, his old berth, when Spock (Leonard Nimoy) invites him aboard to do an inspection of the new trainee crew.

But things aren’t all coming up well for the old crew of the Enterprise as Pavel Chekhov (Walter Koenig) on a supposedly lifeless planet to find a test site for a prototype terraforming device. There, they encounter superhumans led by Khan Noonien Singh (Ricardio Montalbán). In the 15 years since Khan was marooned on the planet, it has become barren and lifeless following a cataclysmic celestial event. Khan takes Chekhov hostage and plots to use the terraforming device as a weapon to take revenge upon Kirk and the Federation. This sets the stage for a grand battle of wits between the two men as they attempt to outsmart each other in the deadly cat and mouse of space combat. 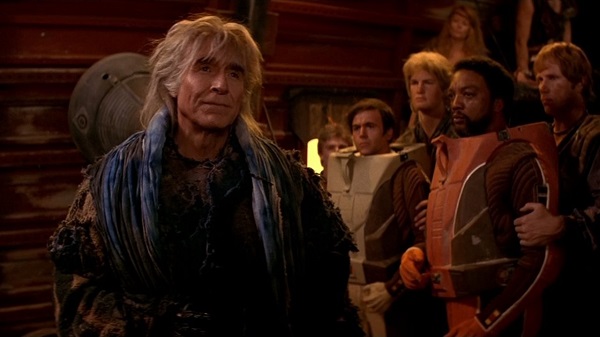 The plot is well paced throughout with a strong narrative arc as we see the action unfold. The characters are well shaped and believable in their motivations and actions while being true to their established personas from the original series. With Shatner, we get Kirk’s strong feeling of wanderlust coupled with his almost childlike joy at being back aboard the Enterprise and being on an adventure as well as his subsequent tenacity when he encounters Khan. Kelley as McCoy is as hilarious as ever with some of the best quips and sarcasm that actually made me laugh out loud. Nimoy plays Spock with the verbal deadpan and emotional stoicism expected of a Vulkan. The entire ensemble cast do a good turn throughout but there is one exception which stands out…

There is one performance that absolutely steals the limelight and it is Khan. Montalbán is an absolutely superb throughout this and it’s no wonder this film is a cult classic considering. I don’t believe that there was a scene he didn’t steal through his sheer stage presence and charisma (helped in no small part due to his costume revealing his excellent physique). He brings out the full melodramatic potential of the Khan’s character by investing arrogance and menace into each and every line. His competence in the plot makes him a credible threat to Kirk and the Enterprise while also giving legitimacy to his own hubris. 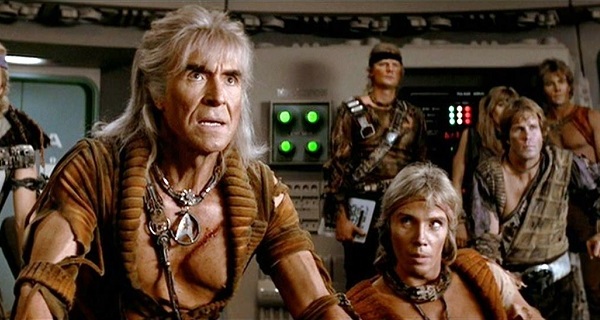 The costume design was similarly quite distinctive. The uniforms for the Starfleet characters are certainly in keeping with the style of uniform in the show with the new alterations defining the higher stations of the main cast. There is a distinct nautical influence upon the design of these costumes as well which adds something new to the overall aesthetic of the film. The costume choices for Khan are the real stand out in this department as, by the nine divines, they are instantly iconic. The design is an interesting take on scavenger chic that isn’t simply the hard leather of Mad Max’s post-apocalypse. The costume works to give a sense of the deprivation he’s been through and create a contrast to his otherwise highly regal manner… alongside obviously highlighting aspects of Montalban’s incredibly toned physique. 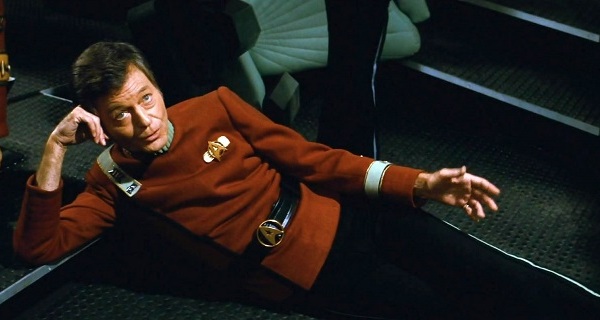 The visual effects have not aged all that badly and I feel that they largely hold up. I feel that this is in large part due to the use of physical models and practical effects. By having a real physical object that the camera could record, sequences like the space battles gain a sense of physical perspective to them which could have been missed if CGI had been used. Speaking of which; the computer generated imagery has not aged as well as the rest of the movie and looks on par with the graphics of an early 90s video game. This isn’t surprising as the film is from the 80s and these effects would have no-doubt been groundbreaking for the time, but a modern audience might not be too impressed. That being said; it didn’t break my immersion of the film and I found it to be somewhat charming, so I doubt that this aspect of the visuals would be ruin the film for anyone who has consumed films or games from outside of this century. 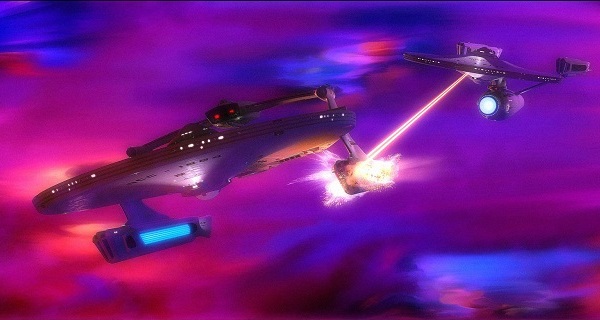 The orchestral soundtrack throughout is strongly reminiscent of the original television series but with some interesting new elements. James Horner, the composer, uses this composition of familiar and new elements to solid effect throughout the film. The music compliments the narrative action and reinforces the emotional value of any scene or shot. Although no specific track stuck out to me, my companion for the screening did enjoy the accompanying track to the Enterprise leaving space dock. Having listened to that track again, it certainly has an uplifting appeal to it with a restrained climax suitable for Star Trek. 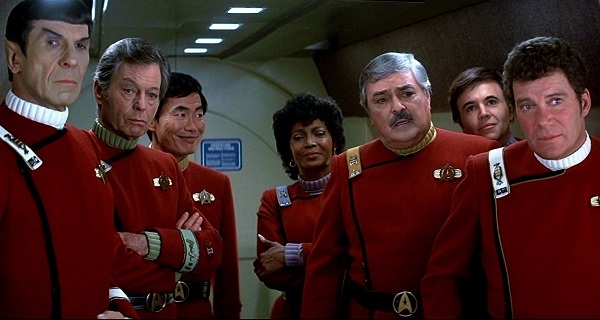 Overall, I very much enjoyed this film and was happy to see it up on the big screen. The story is strong and features an amazing villain who has some unforgettable lines and moments. The practical effects have largely held up against the passage of time but the CGI is obviously dated. The score is solid with a combination of the music from the original series with new elements mixed. Thanks to some standout moments and performances, this film cements itself as one of the classics of science fiction. I would not have trouble recommending this film to anyone who has even the remotest interest in watching. Kudos to In the House for ending their season with a resounding bang!