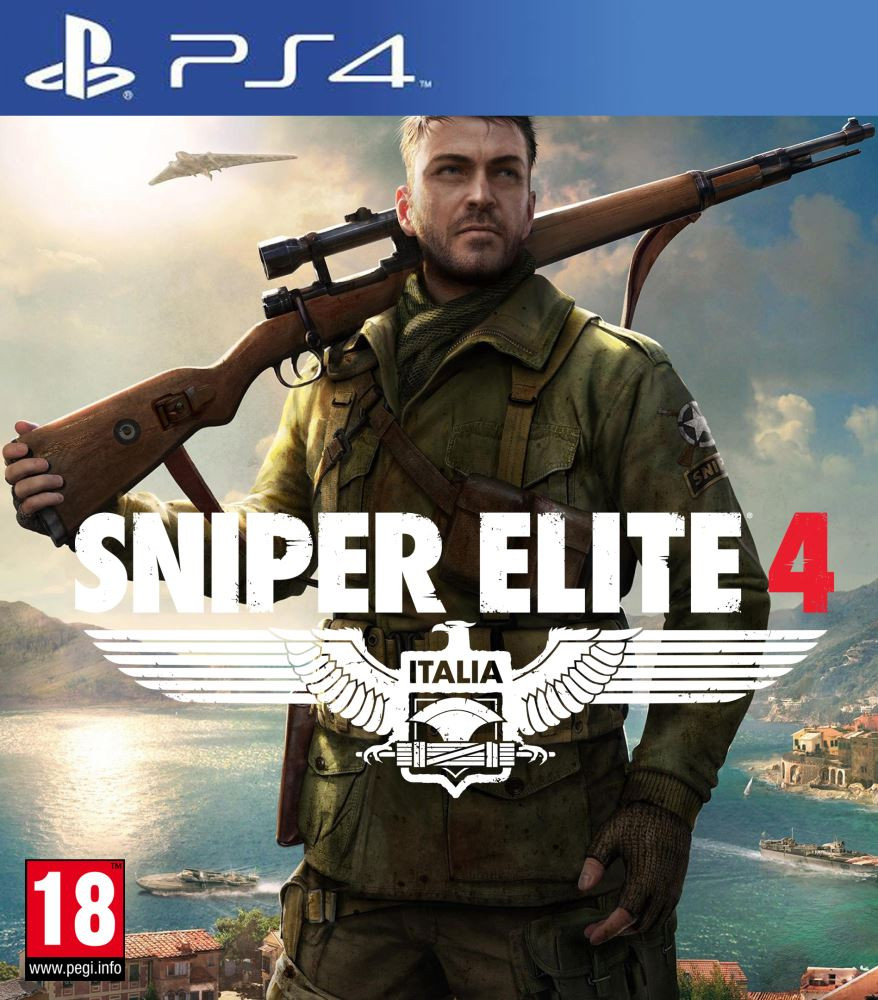 OSS agent Karl Fairburne and his trusty sniper rifle are returning once more in Sniper Elite 4. The new game builds upon the open world setting of Sniper Elite 3, introducing better environmental interaction, larger maps, and new toys for Fairburne to harass Nazis. Fairburne’s latest adventures takes him to Italy where the Italian partisans are putting up a fierce resistance against the Italian fascists and the Nazis. 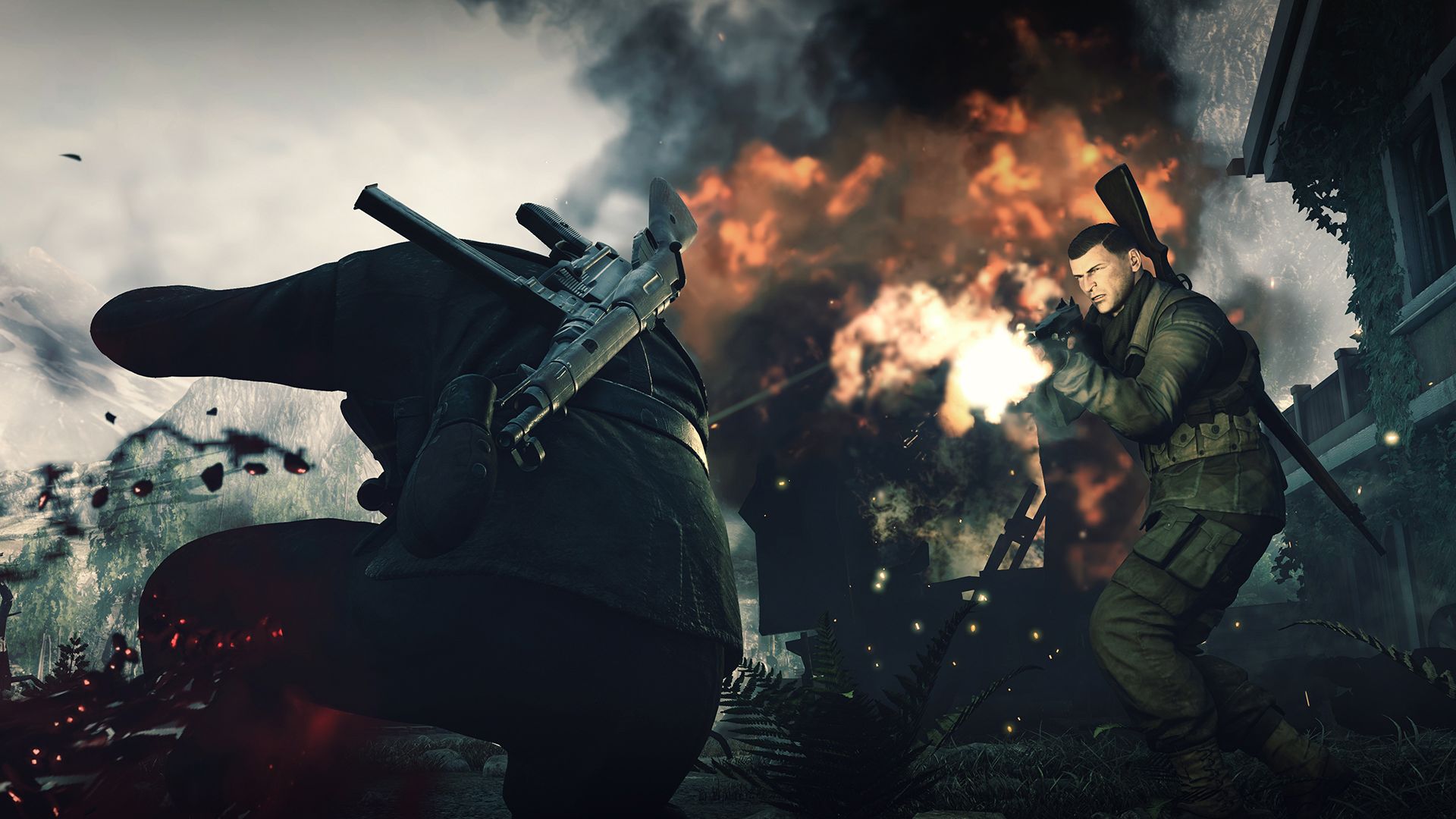 Sniper Elite 4 follows Fairburne’s mission in Italy where he has been sent to neutralize the Nazi’s latest weapon, a radio-controlled missile that has the potential of turning the war into the Axis’ favour. The story is driven by short cutscenes between missions and pre-mission areas where Karl can chat with the game’s supporting characters. Given the lengthy nature of Sniper Elite 4’s missions, the game is a touch light on story. The overall writing is decent, with excellent amount of attention paid to the enemy soldiers the player will spend quite some time staring at. The soldiers chat with each other, make up stories, and talk about home, creating a very believable atmosphere. 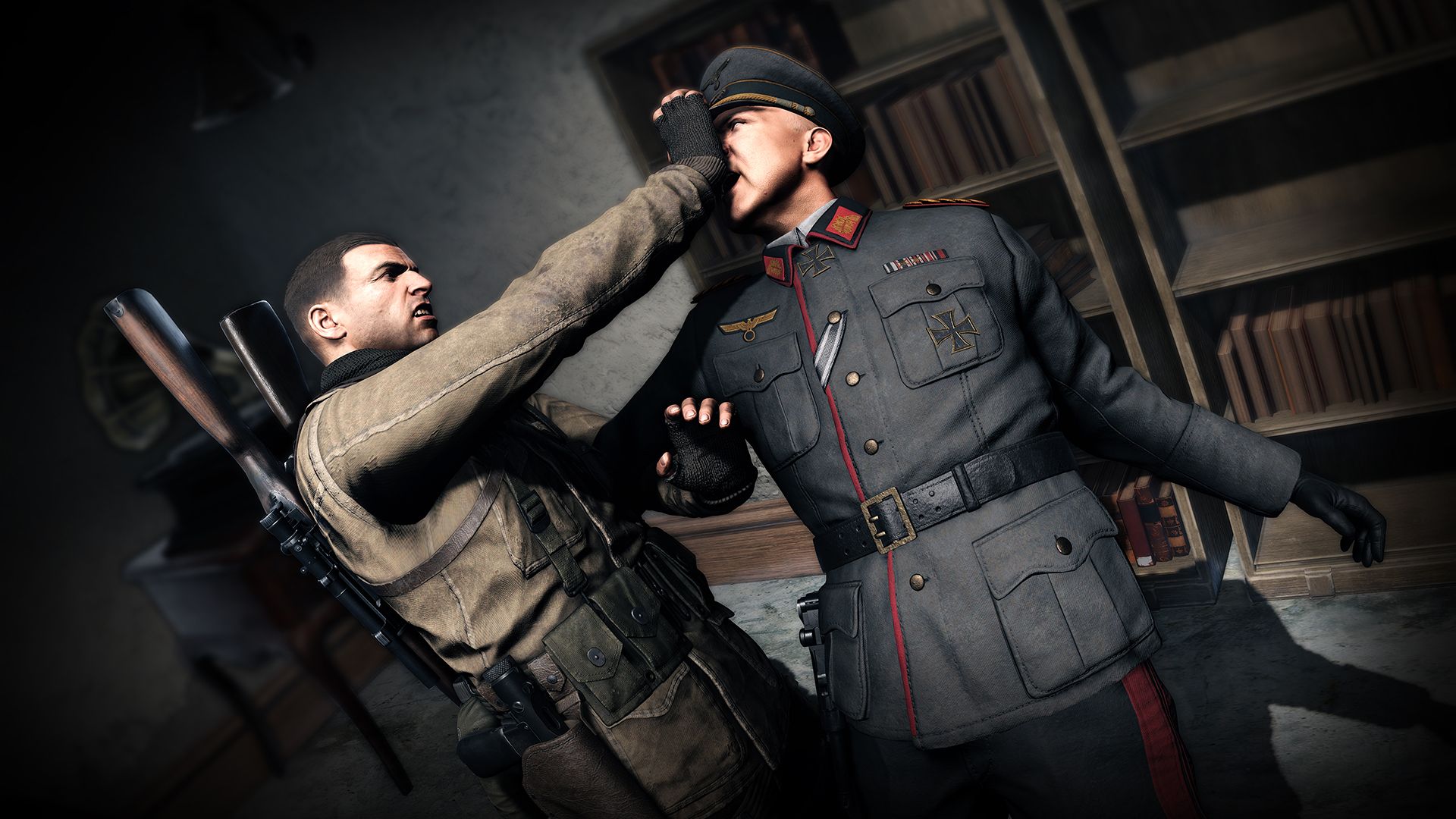 As its name suggests, Sniper Elite 4 involves a lot of sniping, but it is a stealth game first and foremost. Fairburne is only a single man against legions of Axis troops, and he is very much human. Fairburne’s health pool will only regenerate to the closest segment, so players must rely on a limited number of first aid kits and bandages to top up. Bullets do quite a bit of damage, especially at higher difficulty levels, forcing players to strike from a distance, from the shadows, or anywhere else that will give Fairburne the upper hand.

Players are given a sniper rifle, a shotgun/submachine gun, a pistol, and a large variety of gadgets to wreak havoc. New to the series is the dual-use function of almost all items in the game. Many weapons have special ammunition that allow the weapon to be suppressed. In previous titles, players were forced to only shoot when sound cover was available if they wished to remain undetected. The addition of a limited number of suppressed shots creates a lot of flexibility for players to create their own sniper nests or stay undetected using their pistol without being forced to use the single shot Weldrod pistol all the time. Gadgets have also received the dual-use treatment. For example, grenades can double as sticky bombs and anti-vehicle minds can be used on enemy soldiers in a pinch. The extra set of options is a great way to give players more options without doubling the number of items players need to keep in their inventory. More importantly, players can now opt to lure enemies away from them with a rock or towards them with a whistle. Having fine grained control on where the enemy will investigate is likely one of the most helpful tools added in Sniper Elite 4. 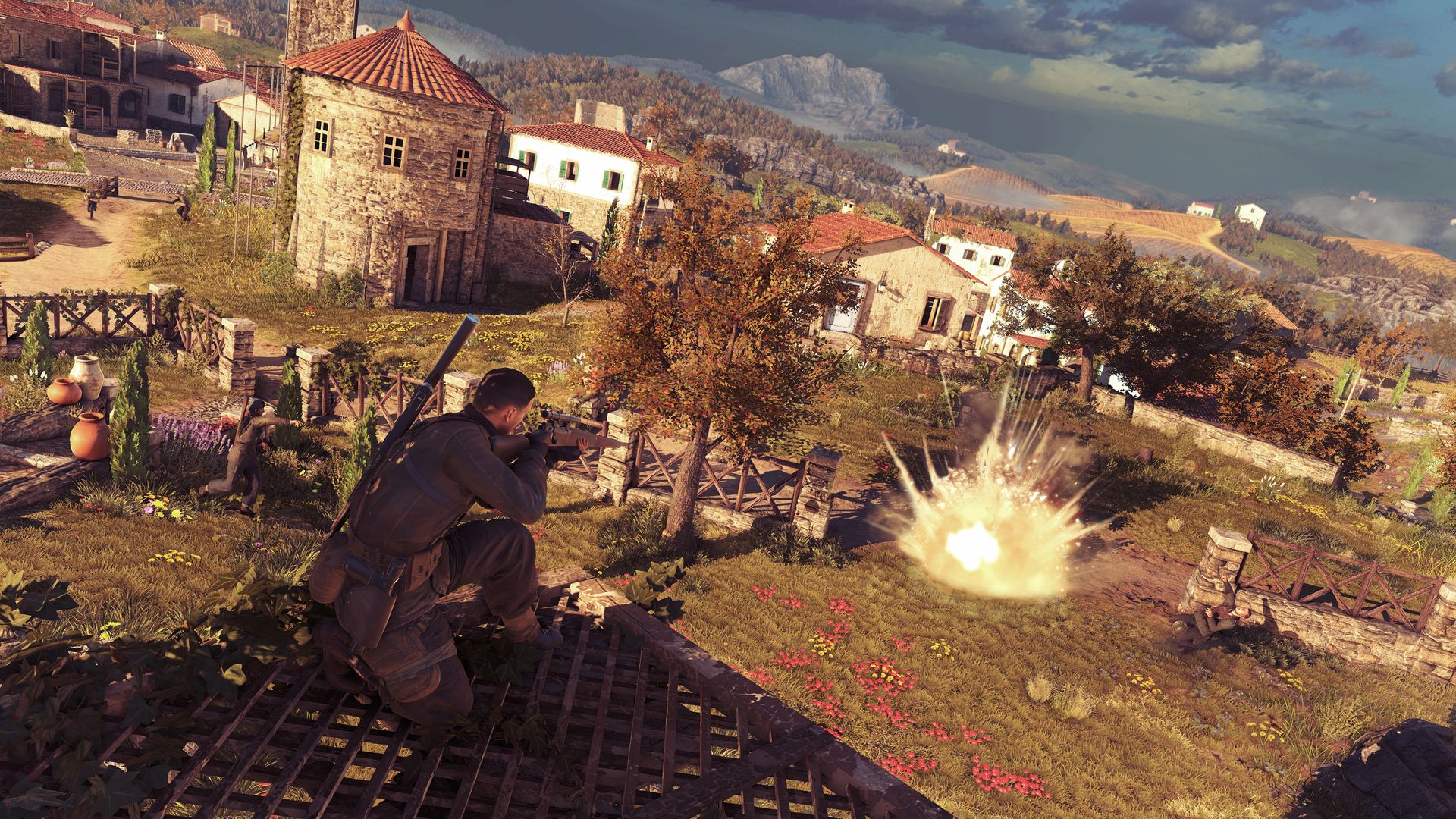 Obviously, Sniper Elite 4 packs some serious attention to creating a realistic sniping experience. The game’s difficulty scaling introduces new layers of complexity as the difficulty rises. The lowest difficulty ignores bullet ballistics completely, letting players focus on their aim and their stealth techniques. The regular difficulty begins to introduce a few ballistic effects such as gravity. The Sniper Elite difficulty introduces realistic ballistics, making players account for wind, gravity, travel time, and scope drift. The final difficulty level keeps the realistic ballistics, but strips players of the shot prediction ability when the scope is steadied with empty lung. Rebellion has also thrown in a custom difficulty setting for players to fine tune the difficulty level, including opting for some incredibly fiendish challenges.

The realistic ballistic setting is very challenging, but incredibly satisfying when a difficult shot is made without any aim assist. I have a greater appreciation for how helpful the modern scopes are in games like ArmA 3. While Sniper Elite 4’s scope reticles are not historically accurate, the markings on many of the scopes are not as useful as modern mil-dots or the in-game ability to zero the scope in 100 meter increments. There is still a good bit of guessing on where to position the scope to account for wind and gravity. For those uninterested in the challenge of grappling with the realistic ballistic settings unaided, it Is possible to snipe your way through the entire game while aided by the aim assist when emptying the lungs. The aim assist works well for the most part, but I did run into a few occasions where the aim assist seemed to “catch” on some invisible obstruction. 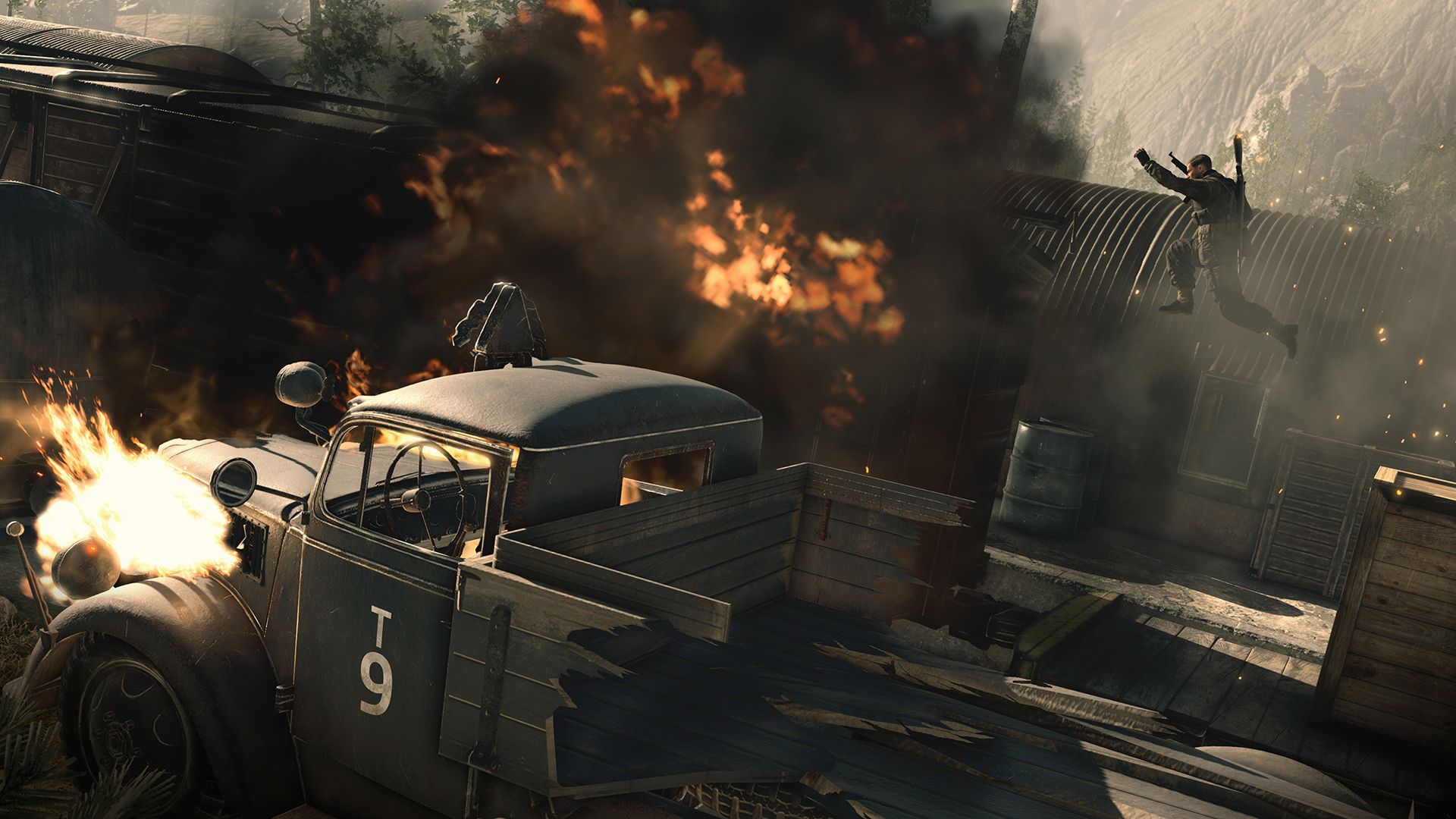 The level design in Sniper Elite 4 is an improvement over Sniper Elite 3. The levels are much larger with greater variation in elevation. The addition of more areas where Fairburne can climb makes levels feel more open and interesting. The levels are laid out well for a stealth game, providing players with lots of corners, bushes, and dark areas to hide. The missions are an excellent mix of tight areas that rely on sound cover to stay undetected to large open areas that will tickle even the most dedicated video game sniper. 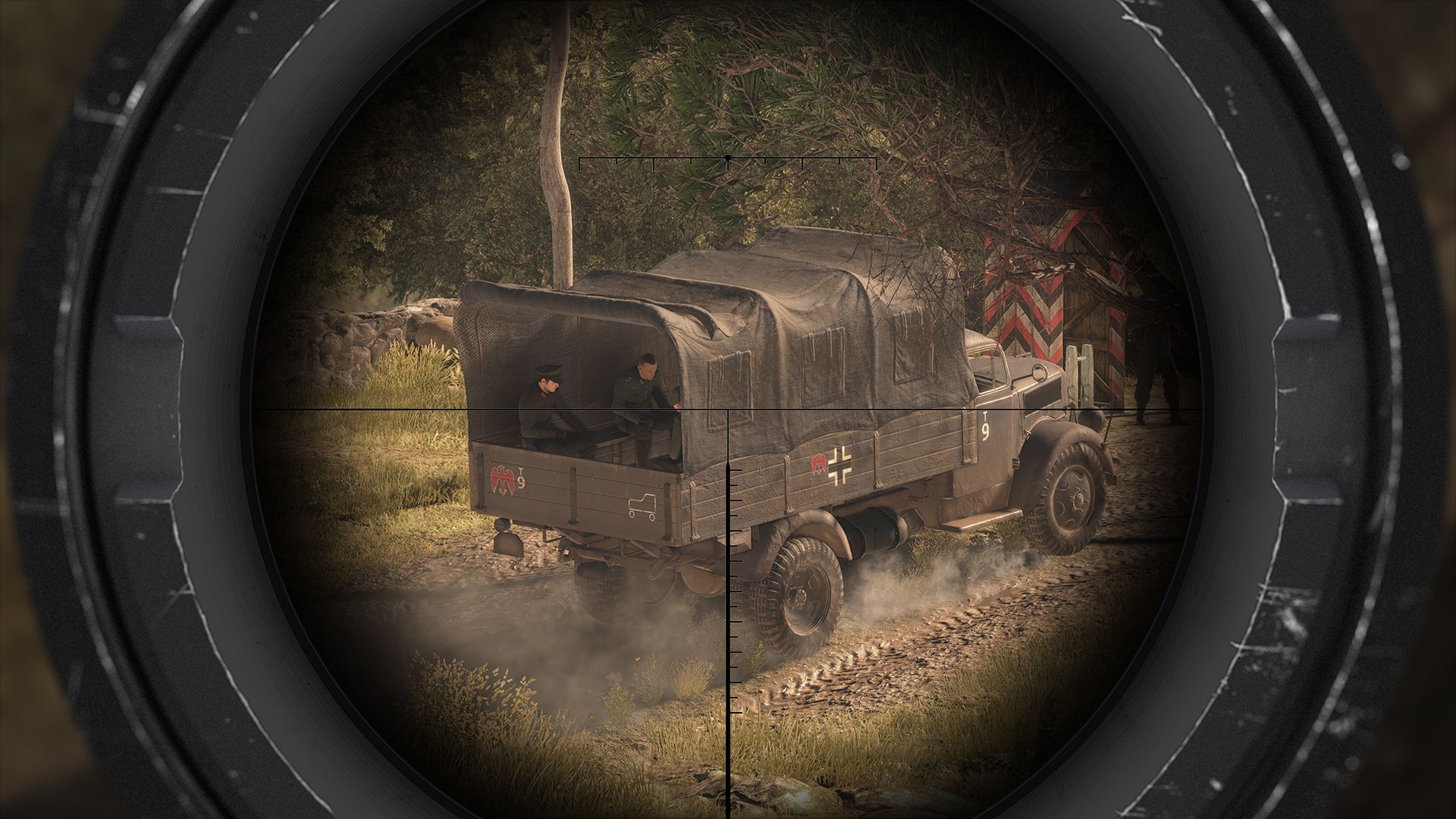 Sniper Elite 4 looks great. The art direction is bright and vibrant, emphasizing the game’s Italian backdrop. I really like the almost sketchbook like style the cinematics use, as it gives the game a unique flair that differentiates it from the standard, gritty World War II video game cinematic. The animations are excellent, and Sniper Elite’s signature kill cams return so players can see in gory detail the destruction they’ve caused. I like that Rebellion gives players control over how often the kill cam shows up, as I personally find the default option to trigger way too often.

Sniper Elite 4 delivers an excellent audio experience. The sound effects are excellent. Gun shots have a great punch to them and echo nicely through open areas. The soundtrack is enjoyable and serves as an excellent backdrop to the game. The voice acting is decent, though there are a few minor parts that clearly do not have the same calibre of actors as the main characters. 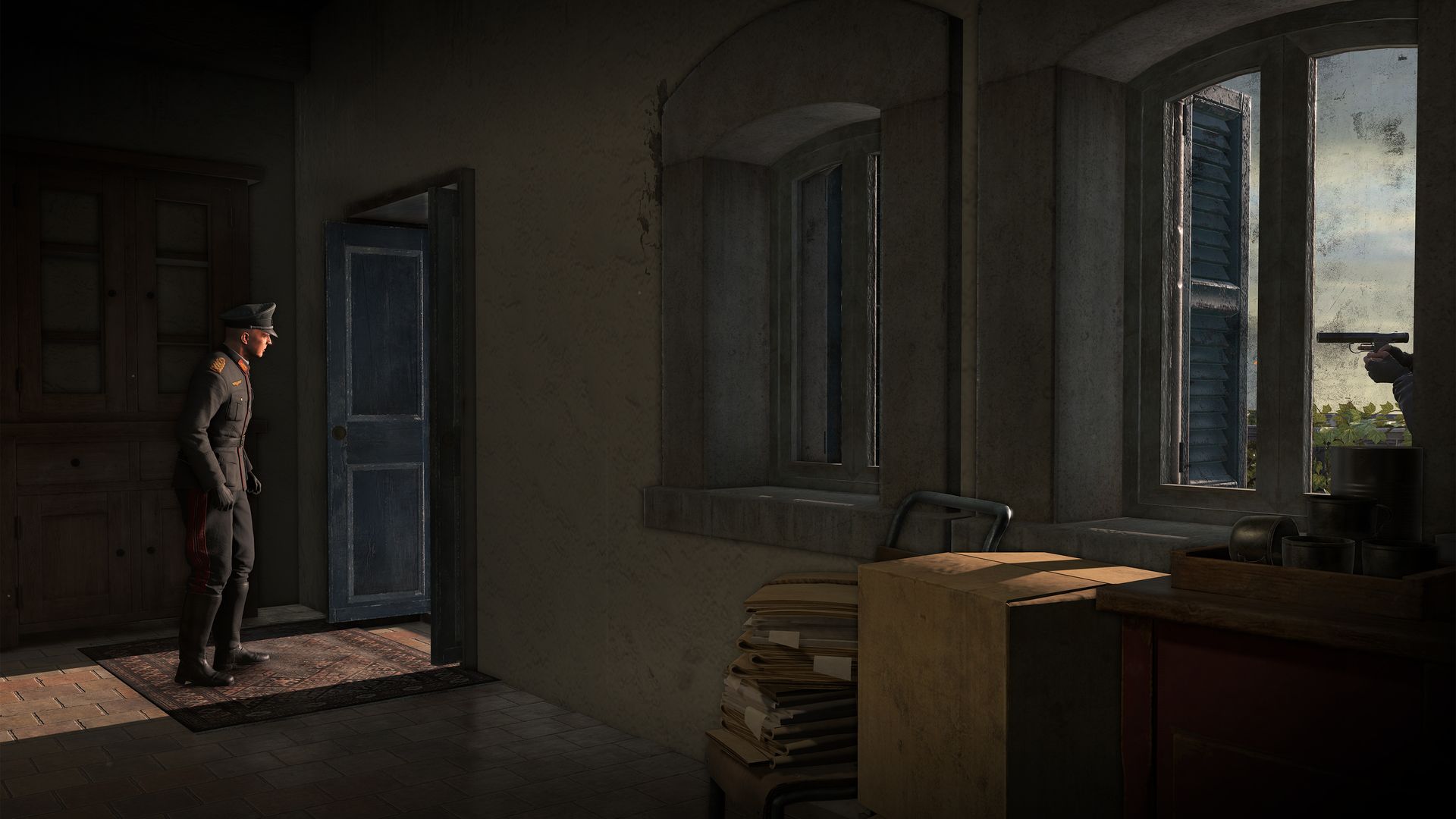 Sniper Elite 4 is not for everyone. As its name implies, the game is designed for a niche of gamers, and the does little to change its target audience. Players who find the idea of methodically working through large levels, sniping enemies and shying away from combat monotonous are going to have a tough time with Sniper Elite 4. On the other hand, the game is an iterative upgrade that makes some small, but solid improvements on an established formula. While the competitive multiplayer is a completely forgettable experience, Sniper Elite 4 delivers a compelling niche title in a crowded shooter market.

Sniper Elite 4 is a solid niche game that will please fans of the series.
7.5