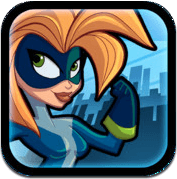 Overview
The developers of Sky Defenders are well known.  They have created games for various big name studios, such as Blizzard Entertainment, Electronic Arts, Oddworld Inhabitants, Petroglyph and Turbine.  Their first game as a studio was named Cosmonauts and it released in December of last year.

Sky Defenders is a completely different game than Cosmonauts though. Set in an unnamed city, Sky Defenders has you controlling one of two superheroes in a top-down collectible shoot’em up experience. 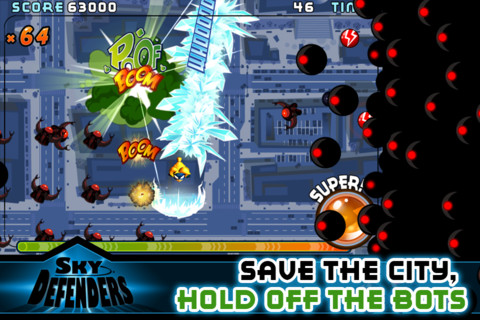 Gameplay
As a superhero, it is your job to protect the city from alien bots. As you fly around over the city, the bots will try to attack you. If they manage to lay their cold tentacles on you, you will be stunned for 3 seconds. Therefore, fast reflexes, superior flying skills and weapons are needed. Weapons you say? But doesn’t a superhero usually have a power inside him, or one that he can call upon at will? Not in this game, my friend. Not in this game.

While zipping around the alien bots, you are required to pick up collectibles. As soon as they are picked up, they activate and kill bad guys. Picking up the ‘ice’ collectible, for example, allows you to smash through several alien bots. The ‘explosive’ collectible is self explanatory. A ‘magnet’ and ‘lightning’ collectible are also included. Once you have killed enough of the attackers, you can activate a “SUPERPOWER” for about 5 seconds, which deals a lot of damage. As long as you keep killing baddies, your combo meter goes up. Fly around aimlessly too much or get stunned, and it goes back to 1x. The game starts you off with 60 seconds on the clock, but you can gain more increments of 20 seconds if you get a good score.

All in all, I had a great time with the core gameplay. Zapping alien bots was awesome, and I liked setting off the collectibles. The pace was really enjoyable, and I constantly wanted to better my score. In addition, when I would deftly maneuver around a pack of bots, set off a massive chain reaction or get a good combo, I was having a blast. Grabbing an extra 20 seconds on the clock always gave me a rush because I knew I would be able to continue playing the game without having to go back to the menu screen. 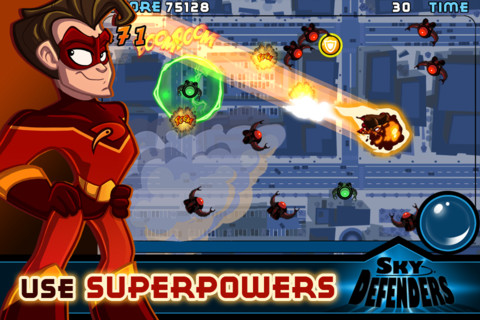 Nevertheless, there are some serious problems with the game. While the standard gameplay allows you blow up aliens in fine fashion, it can be quite hard to rack up a a good score. There are two reasons for this. One is that the game utilizes tilt controls, thus often making it hard to operate with much dexterity. Although it is possible to adroitly fly around the aliens at the beginning of a level, by the middle of the level the enemies come in such great number that it is frustrating to collect power-ups because your more than likely to get stunned for a precious 3 seconds, get released and then fly right smack into another group of aliens who repeat the process. This is especially troublesome if you are playing the game while traveling in a car or other transport.

Secondly, Sky Defenders allows you purchase helpful bonus items that can increase speed, reduce stun time or activate a sidekick.  The first time I played the game, I spent about 20,000 credits, assuming that I would quickly earn them back again.   However, to my surprise, I learned very quickly that credits accumulate at a glacial pace.  While you can try to speed up the process by accomplishing the daily mission,  or by getting a VERY high score (which is tough to do considering the controls), there is also another option: in-app purchases.  Paying $0.99 will get you 25,000 credits which lasts about one 2:00 minute game, if you buy 3 power-ups.  The power-ups make Sky Defenders a much more fun game and they allow for higher scores, but it is frustrating that earning them was not balanced very well.

Another issue I had with the game was that it constantly asked me to sign into Facebook and ‘Like’ the Sky Defenders page. It promised to reward me with 10,000 credits. After going through a slow process of opening up Facebook and typing in my credentials, I “Liked” the page. I backed out and tried to collect my credits, but I didn’t get anything. I restarted the app and still nothing. Although the Facebook popup was annoying, and the lack of awarded credits disheartening, I actually do like the Facebook integration. If your friends buy the app, you will be able to compete on the leaderboards against them. 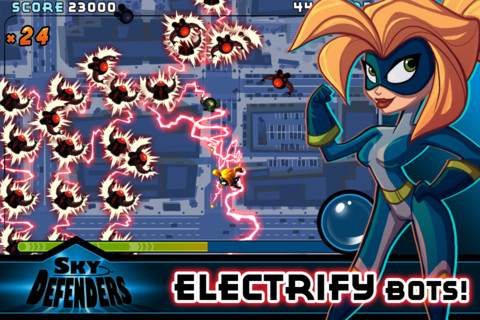 Audio and Visuals
The soundtrack in the game is a standard “cartoon superhero” type mix, similar to what can be found in many TV shows or movies. That said, I enjoyed it and it kept the game moving, although it did get stuck in my head because it keeps repeating over and over. Sound effects, like smacks, bangs and explosions are pedestrian, and while the game would certainly be incomplete without them, they don’t do anything too exciting either.

Sky Defenders graphics are beautiful for an iOS game. Animations are smooth and detailed. When power-ups are used, they pop out of the screen and look really cool. In addition, the menus are full of life and color.  The character models are really detailed, and look really good, especially considering how small they are.   However, the background is dull, being just a plain blue overlay on top of anther dull graphic that looks somewhat like a city.  Plus, while most of the UI is good, the constant Facebook popup mentioned above was annoying.

Overall
In conclusion, Sky Defenders is a game that feels a tad unfinished. A lack of extra modes, bothersome controls and limited power-up options mean that there is only so much to keep the game interesting. Maybe after a couple updates (or if you opt to overspend on ridiculously priced in-app purchases) Sky Defenders will become a “must have” game, but in its current state, it is better to hold off for awhile. Then again, super hero games are always fun to play, and I can’t deny that I always like smashing, electrifying and blowing up alien scum, especially when the price for such enjoyment is only $0.99.  In addition, I love that the game has “Daily Mission” to accomplish and Sky Defenders gets more charming by the second as you play through it.