Overview
The iOS has always been a platform where polished touch controls are the main factor that either hold a game back from reaching its potential, or provide innovative mechanics that let it excel. Platformers, action titles, and shooters normally fall flat due to the awkward virtual joystick, but if one genre was meant for your handheld device – it is tower defense. Crescent Moon Games have brought us the latest and greatest for the service – dubbed Siegecraft TD, where you as the player have to protect your sheep from hordes of angry lizards. With a bit of comedy and light-hearted effects tossed in, does this defender win, or is it one title on the marketplace that never gains its footing out of the castle?

Gameplay
I wouldn’t say Siegecraft TD does not have any type of narrative, as there are some colorful characters that try to put on a bit of a show for the defending objective – but honestly, they don’t quite justify their existence well other than introducing new areas and baddies. At times we will also see a cheesey joke made to pound in some humor for the player, but again – this is all very surface level. Since this is a tower defense title at the core, that is completely forgivable however, as Siegecraft gets it right with the gameplay engine involved. 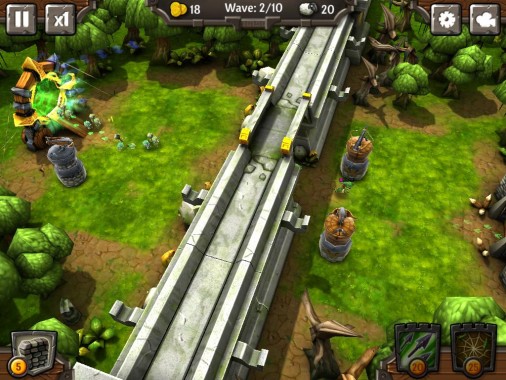 Siegecraft TD plays a bit like veteran tower defense titles out there such as Plants vs Zombies, where the player must defend their castle by placing turrets, walls, and other weaponry on the map to stop waves of enemies before they reach their mark. To do this, the game utilizes the touch control at full, having the player drag and drop their tower of choice to any desired square on the grid – to which we see the totem instantly come to life and start blazing arrows or dumping buckets of lava on unsuspecting lizards. Each area has different terrain that effect where the enemy camps spawn point is, so the player must try to line up all of their own towers strategically in a maze-like format to snipe foes as they come out in lines. 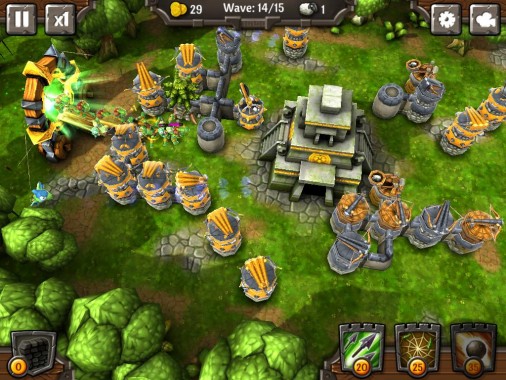 One would probably say “Why can’t I just block the enemies in with walls?”, and you would have a point with that statement, but this title doesn’t take itself too seriously as it is, so throwing logic out the window is the best way to enjoy the product before us. The camera often starts out from a top-down view, and most of the time, that is effective enough to keep an eye on the entire battlefield. When chaos starts erupting however, there will be times when you will need to get a different perspective. Thankfully, an easy to use two-finger pinch mechanic has been added in just for that, allowing players to quickly zoom the camera to get a closer look, as well as spin the camera around to see the action happen. 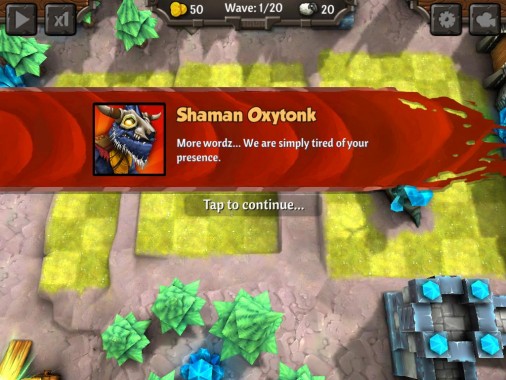 Its all very run-of-the-mill tower defense during the main campaign consisting of a decent grouping of landscapes to defend, but what makes Siegecraft TD stand out a bit is the leveling system in place. While out on the battlefield, each turret, tower, or device used to slow enemies can be leveled up by utilizing game currency. The player starts out with a small chunk of change to build their first towers, and as each wave of enemies are defeated, more gold is rewarded to keep you busy adding more units. For instance, if you wanted to add a pot of lava to douse enemies as they passed by, that would be 30 gold. To improve the range and power, you can choose to spend your next gross of gold on an upgrade, which costs slightly less than a new unit. Creating a winning layout with the tools provided is what it is all about, and with around 15 different towers in all that come unlocked as you progress, there is plenty within the main campaign to keep the experience fresh for hours.

To keep the game going after the Campaign is complete, a multiplayer mode can also be played, and works in a different fashion. This asynchronous mode has up to four players go at it online in a turn based affair, where the player must partake in two different phases of combat. The first phase is defense, which plays just like the main game, where you are simply defending your sheep that are tucked away in the castle. Once a specific number of waves pass, the game will then go to the second phase, where the player assigns knights to fight for enemy territories. Think of it as a strategical battle for supremacy. Sure, its a bit basic, but a welcome addition that adds in a hefty amount of replay value to the main experience. 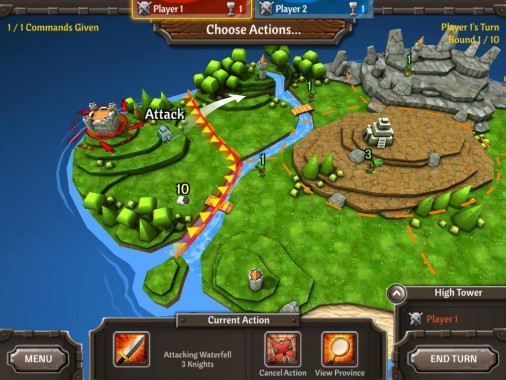 If I had any gripe with the gameplay of Siegecraft TD, it would be something that should be able to be corrected with a patch. You see, enemies come in waves, and each wave produces a greater number of lizards to take out. Nearly every time I would get past wave 15, the game would crash. There is a checkpoint save between waves to jump right back in on the previous battle, but its rather frustrating to see the game come to an abrupt stop during the most enjoyable and chaotic moments in the game. As I said though, a patch could and probably will be applied down the line.

Visuals and Audio
The visuals in Siegecraft TD are rather pleasing to the eye, with 3D environments filled with bright color and nice textures, allowing each area to appear different from the next. Enemies reminded myself a bit of the Kremlings from Donkey Kong Country, as they appear to be your standard, yet goofy, walking and squawking reptiles. Animations stay stable for the most part, but when large amounts of enemies are on the screen at once, there can be a little bit of slowdown, but not enough to hamper the experience unless a full-on crash occurs. 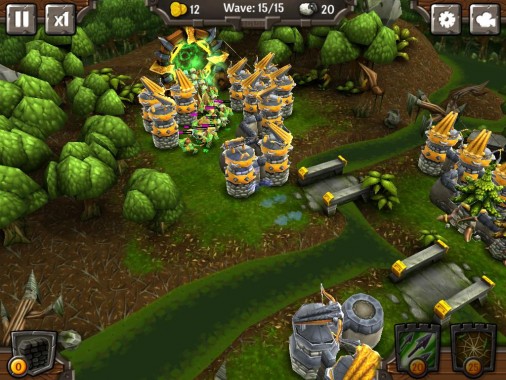 The audio is a little less desirable. You see, Siegecraft TD tries to be funny, but the humor is very subjective and was not my personal cup of tea. From time to time, an Australian commentator of sorts will shout out different phrases while you are doing well within a game, and this will lead to you hearing classic zingers such as “Gangnam Style!” yelled out that kind of take away from the charm the game had going for it. Enemies are rather sub-par here as well, with generic grunts and horns played as hordes come down to attack. The music I can say is fitting, but its hard to enjoy the sound for what it is due to all of the forced humor that does so little to add charm to an experience that didn’t need commentary.

Overall
Siegecraft TD is a well-polished tower defense game that doesn’t beg for micro-transactions and provides some rich and strategic gameplay sessions due to the unique leveling system in play. Its a shame that we didn’t see a bit more depth added to the story, as there is a charming romp waiting to get out here, only held back by with bad attempts at humor and basic character design. With that said, the price is still right for Siegecraft TD, as it delivers a large amount of fun for very little dough, and should only improve as patches are applied to make the main experience more stable. Sure, you won’t find a lot here that differs from the genre, but if you have been craving to save sheep from armies of hungry lizards, you can now get your fix.