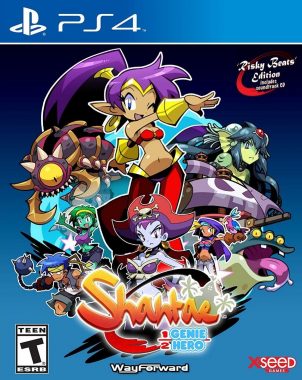 WayForward broke out over ten years ago with the original Shantae for the Game Boy Color. Since then, we have seen magic made with the development team crafting hit after hit, with most being licensed properties. With a successful Kickstarter and a lot of work, our beloved mascot has returned in Shantae: Half-Genie Hero. This entry deviates a bit from the original, but still brings back the fluid platforming and charm that the franchise is known for. The question is, can this version stand with the high quality work WayForward have delivered over the years? Let’s find out. 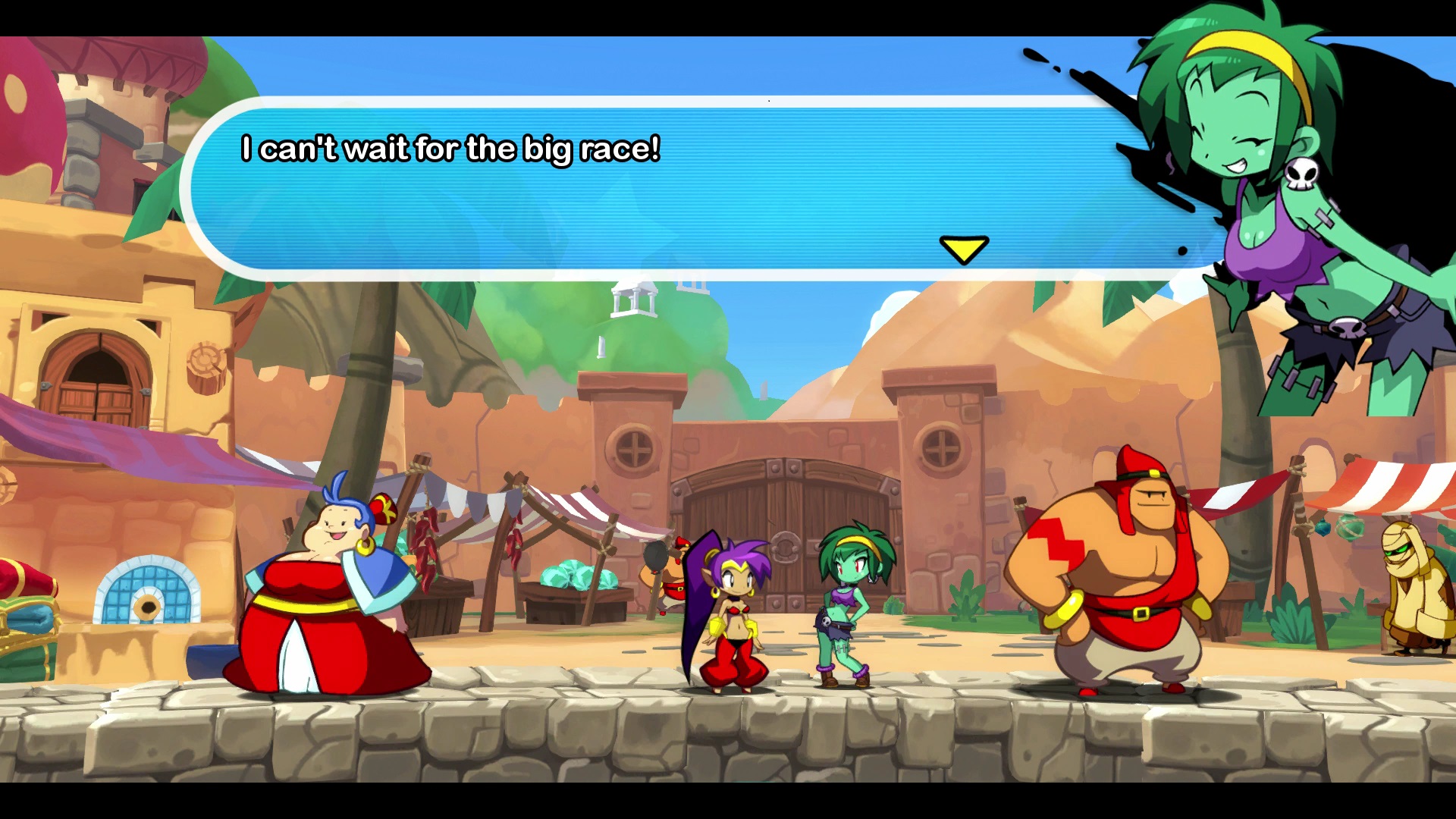 Shantae: Half-Genie Hero takes us back to Scuttle Town, with Risky Boots up to no good (as usual). This time however, a greater threat is preparing to attack, and Shantae must fulfill her obligation and protect all of Sequin Land by recovering blueprints to the Dynamo – a device that can protect all of the townsfolk from potential danger. For spoiler purposes, I won’t elaborate too much more, but the story is quite deep compared to past entries as we get to learn some of our half-genie’s motivations and past like never before. Shantae may be four games old now, but the wit and humor as remained in tact for this adventure, showing our protagonist in a new light while still retaining every aspect that made her so endearing over the years. The rest of the cast such as the mayor, Bolo, Rottytops and so on are also in full form, letting the player dive back into to an excellent new adventure with an old friend.

Most of the games in this series generally have the same feel when it comes to gameplay, and in most ways – this installment feels very familiar. Shantae can still bop enemies with her ponytail, transform into animals, and utilize potions for powers – as the platforming is extremely fluid and fun. Honestly, that should come as no surprise as there is not one of Half-Genie Hero‘s predecessors that have ever slacked. There is one difference that does change a lot however, and that is that this title has chipped away its outer layer of a “Metroidvania” styled game in order to appeal as a pure platformer. Yes, that is right. Instead of exploring one large map in order to get to the next stage, we now have a handy stage select screen where players can fly from world to world as they progress. This may miff a few hardcore fans, but the transition is a smooth one and you still get a large hub city to wander in – you just have a bit more focus for this adventure as a whole. 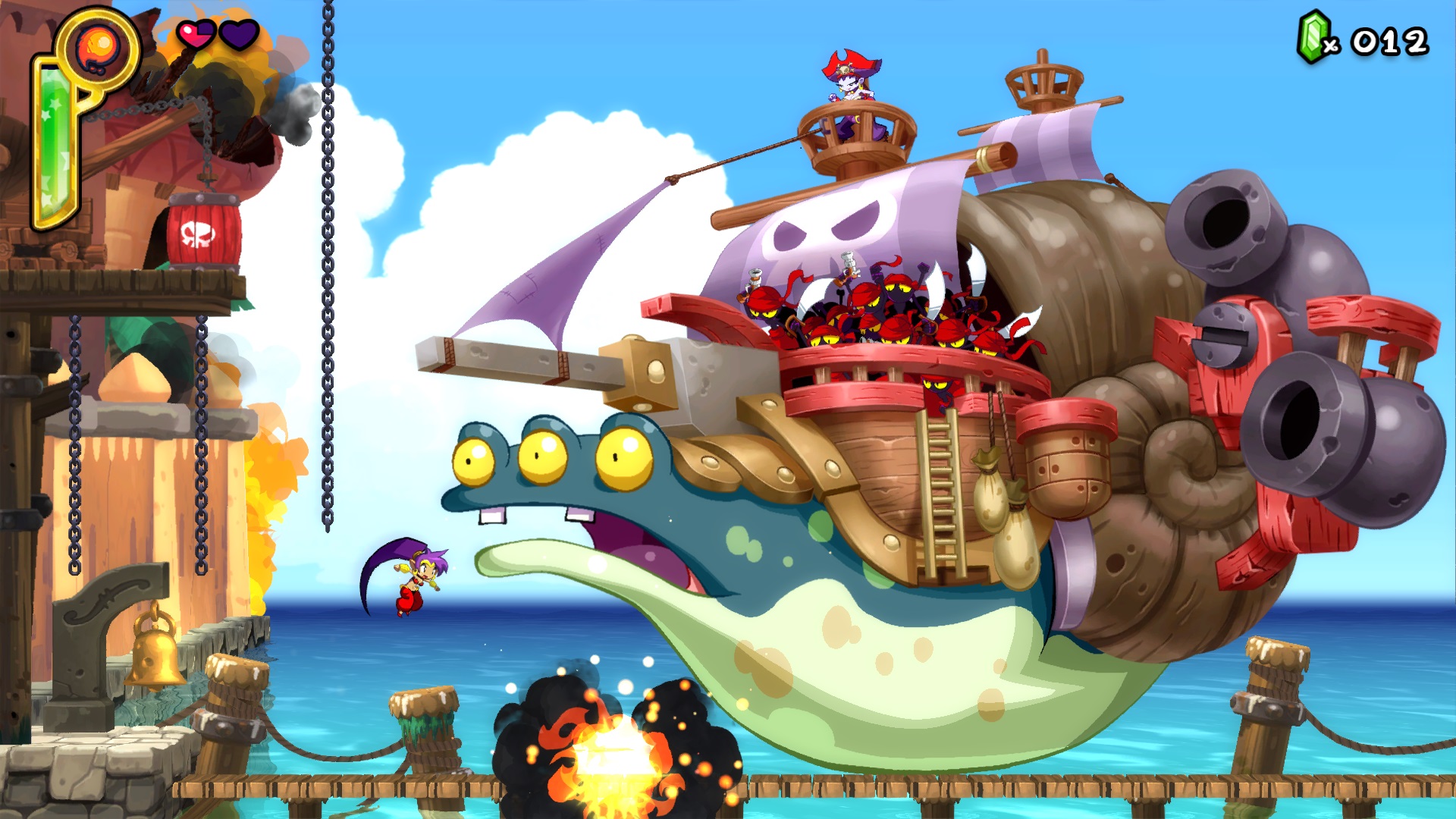 Another change can be found in the overall difficulty. Shantae has never been a terribly hard game to start with as like Mario, the platforming has always been accessible and simplistic. This title however has a bit more of a trial and error approach to some stages however, meaning if you run into danger without looking or thinking beforehand, you might wind up doing the same area again until you nail the appropriate platform or take out the particular enemy blocking the way. There is no down side to this as the game is fun (yeah, that can be a positive) and I never found myself frustrated even when I died at my own fault as it took less than a minute or two to get back in and give it another go. I personally dislike trial and error, but Shantae’s is light in this outing and causes no foul due to how simple it is to hop right back into the experience. 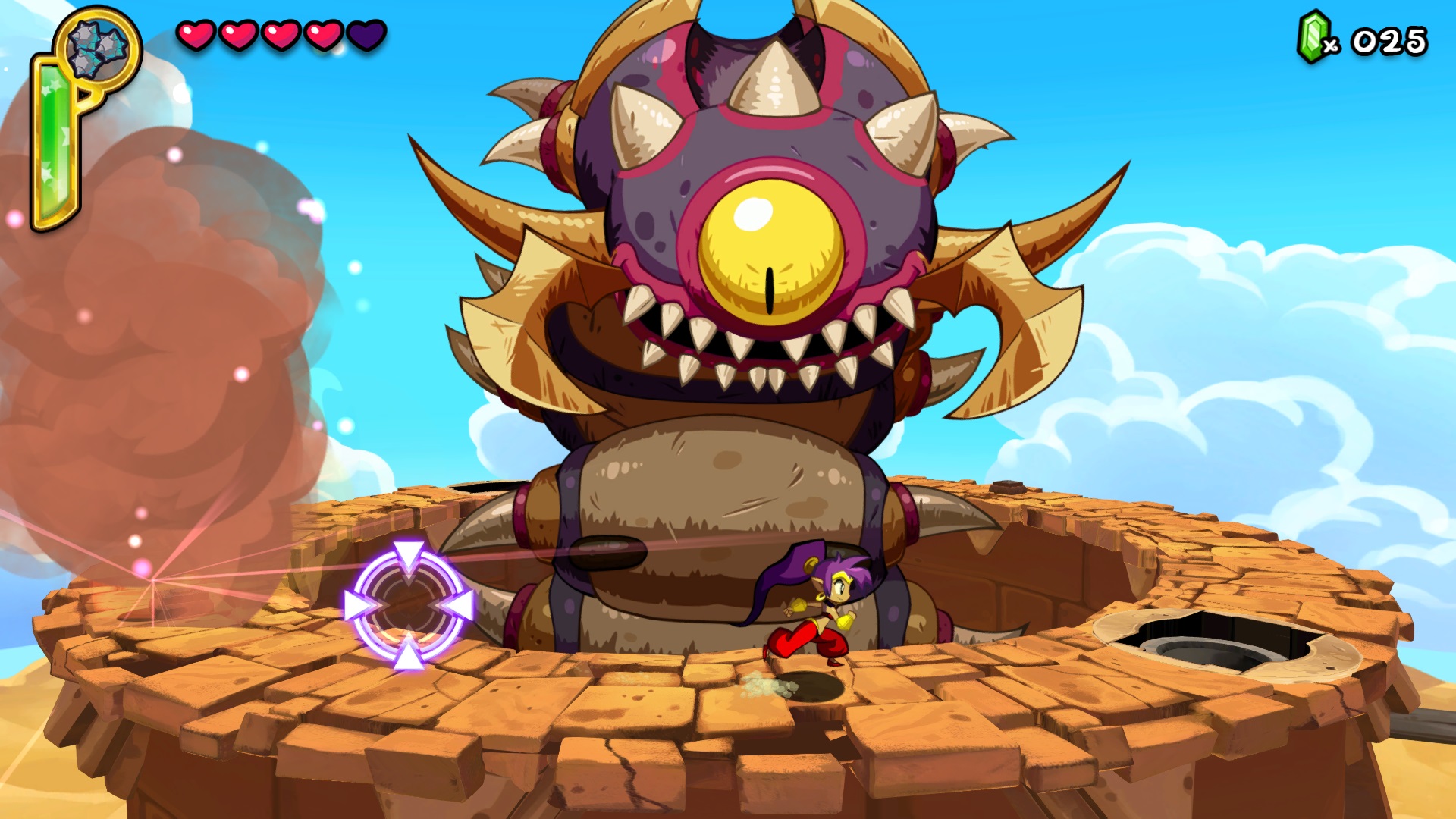 Shantae brings a ton of upgrades with her in Half-Genie Hero, such as the transformation abilities as well as special potions that allow her to utilize new moves. The transformation aspect includes the likes of the monkey, a mouse, a crab, and even a blobfish, with each treating the player to a new mechanic that will allow further progression once obtained. Because older stages can be revisited at anytime, this means that you can now discover new areas and items once you revisit, and with the stages changing after the first completion (usually in difficulty), players will be happy to know they can turn into a fish and bounce onto the heads of their enemies until their craniums crack. The currency system is about the same as it always has been, with a shop in tow that allows players to buy upgrades and powers for Shantae to utilize, with the ability to add techniques to the animal transformations being an option. 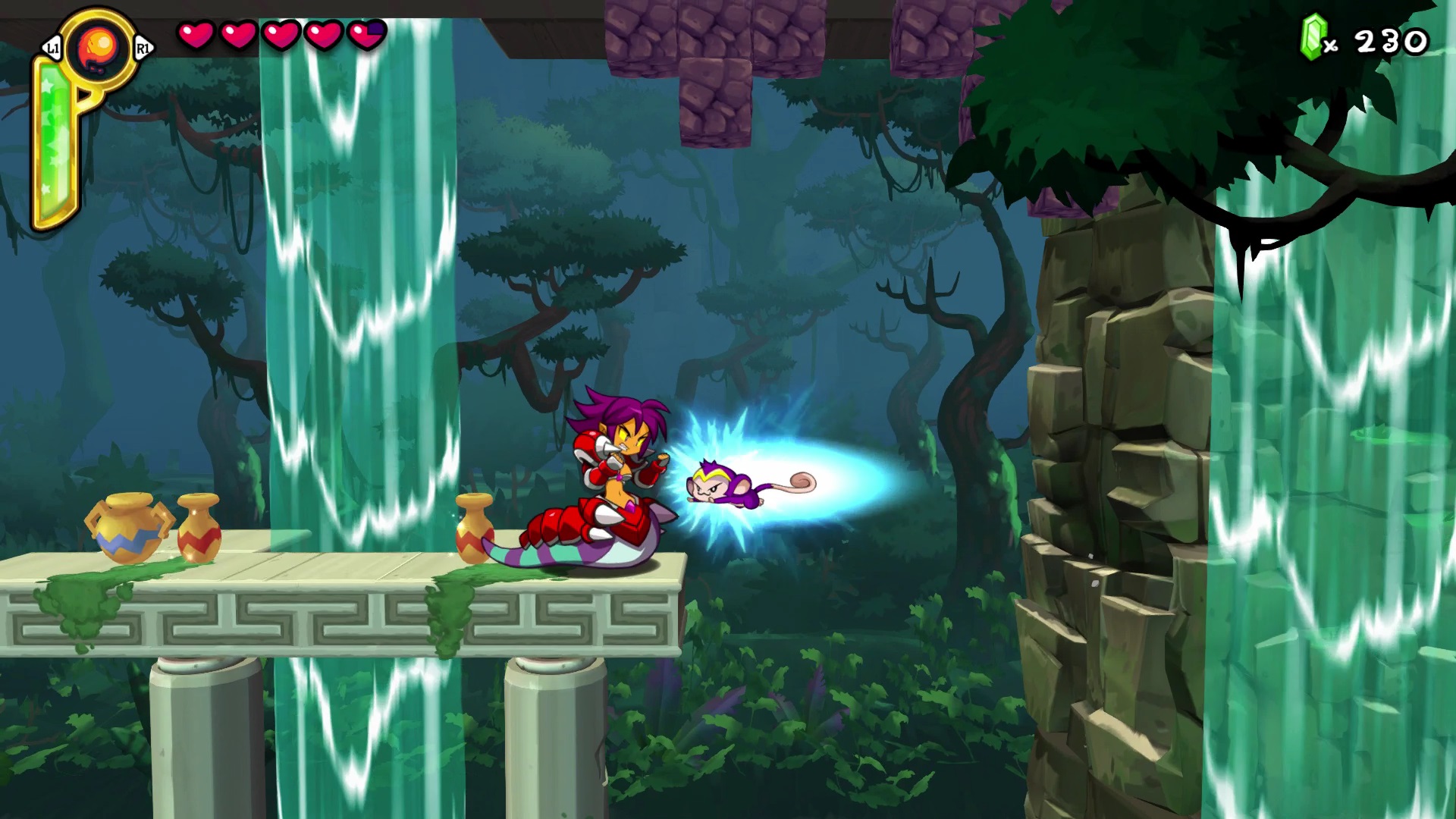 Completionists will get a huge smile on their face when playing Shantae as well, as there is a ton of reason to continuously replay stages aside from the silky smooth gameplay. There are a ton things like souls of pirates to pick up, and this title rewards excellence with more content that can be unlocked for both Shantae and the player. While the game in itself is rather short, this is a title that encourages replay-ability through several means with just enough shake-up to feel new with back-tracking, boss battles, and enjoyable dialogue that spurts from the many residents of this alive little world.

Visually, Shantae: Half-Genie Hero is the most beautiful 2D game on modern platforms. The colors are loud and stunning, with fantastic animation and an upgraded art style that bleeds deep within the detailed worlds within. For a game already founded on exploration, I found this title to be particularly joyous to progress in as everything is just so pleasing to the eye, whether you are in a dark, burning city or a lavish green level. The character designs themselves may look familiar to most WayForward fans as Mighty Switch Force now has a striking resemblance, but if the devs want to trade pixels for that kind of polish and crank it up to ten, I say why not? 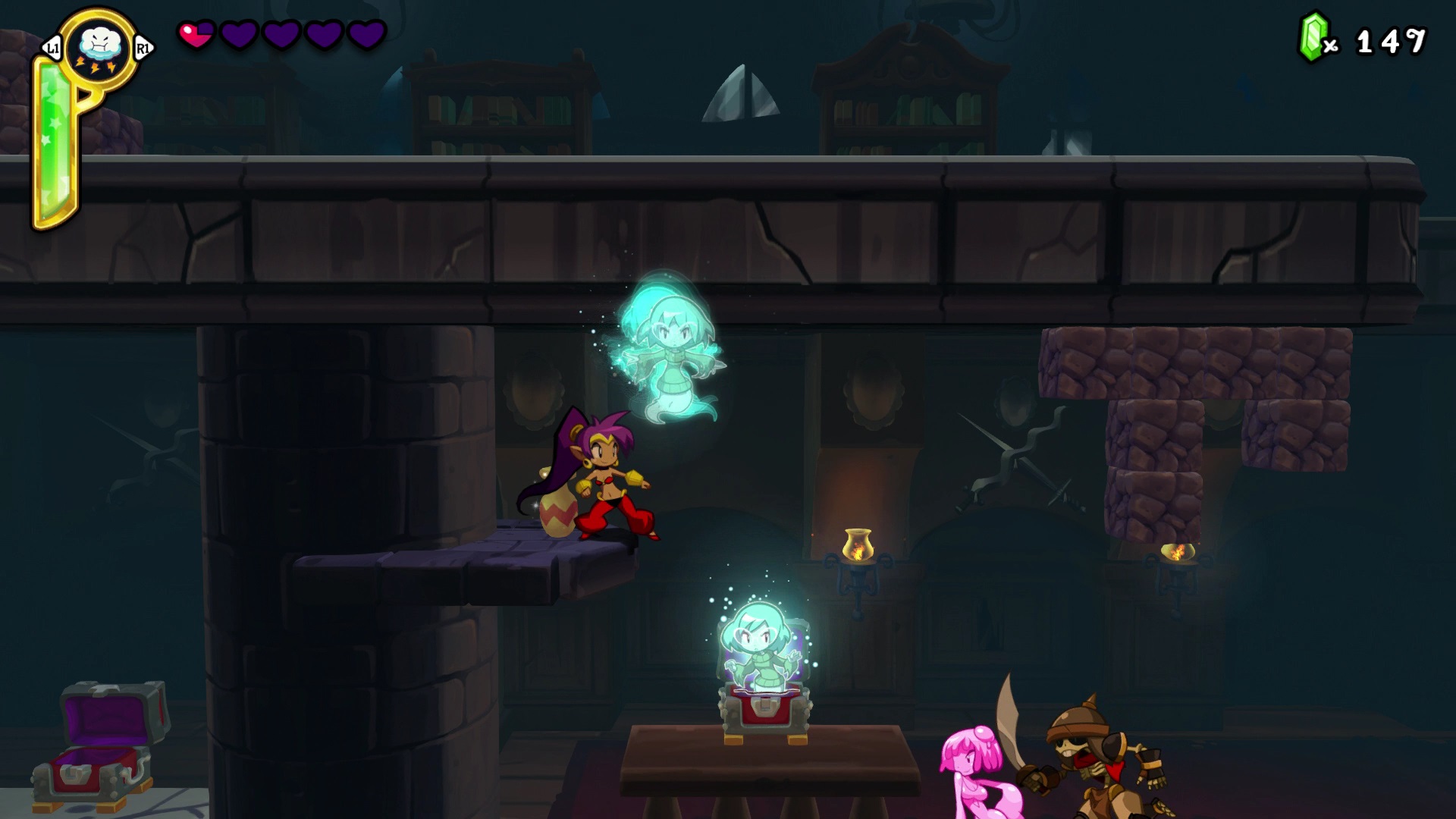 The soundtrack is also amazing here. Featuring a blend of audio with plenty of unique tracks, Jake Kauffman has crafted an epic with the music featured here. There is also a small amount of voice acting despite the story being mainly text-driven, and the actors made their characters come alive even more due to some stellar performances that capture the quirk exceptionally well. It is actually a rarity for a game to hit the nail on the head for almost every category when it is crowd-funded, but the splendid audio ties together a fine package of consistency and quality to make this adventure upbeat and warm from beginning to end.

Shantae: Half-Genie Hero is one of those rare releases that manages to capture what we love about “those games we grew up on” and completely modernize the gameplay with fresh ideas and mechanics alike. Sure, the concept of a half-genie saving the world may not bring in a ton of new players, but those who are looking for a smooth, polished platformer will be ecstatic to load up one of the best examples of the genre we have seen in years. Half-Genie Hero is now the title that can represent the positives of crowd-funding, as this sugar-coated treat is a breath of fresh air to a genre that has been watered down due to cheap cash-ins and overhyped challenge runs. Simply put, Shantae is back and better than ever, proving that hard work can equal great rewards. 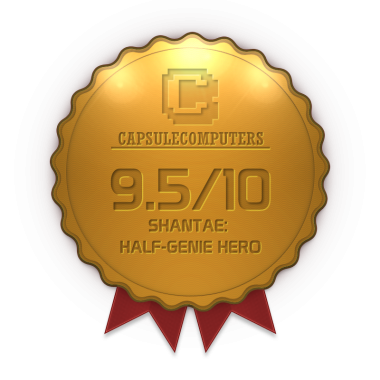 Shantae: Half Genie Hero blends quality with quirk for an unforgettable platforming experience.
9.5