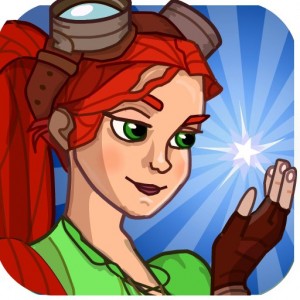 Whilst playing Scarlett And The Spark Of Life something came to my attention: iPhones are the perfect console for point and click adventure games, and there should be a million more titles like this for the app store. While many developers fight to squeeze millions of virtual buttons and control sticks onto a screen, utilise 3D graphics, and attempt making games up to the standard of home console titles, some of the most successful and enjoyable games on the device have always been the simple touch games like Angry Birds and Bejewled. I wouldn’t go ahead and say Scarlett And The Spark Of Life is the greatest game out there for iPhone, but Launching Pad Game’s latest title is bursting with character, and is a must-have for fans of the point and click adventure genre, as it is a lot of fun to play. 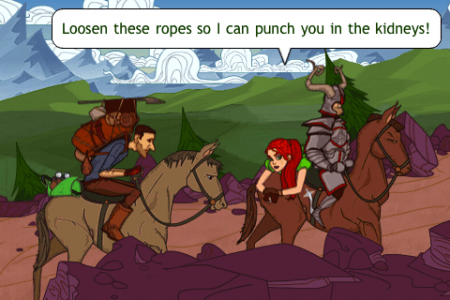 Honestly cannot think of the last game that made me laugh, smile and giggle as much as Scarlet And The Spark Of Life: Episode One.

Scarlett And The Spark Of Life (or ‘Furious Princess Builds a Horse’ as the game was originally called-thank god it didn’t stick!) is a bright, fun, quirky and very funny adventure game where players take control of Princess Scarlett and her trusty crowbar as she’s on the run from her kidnappers, and attempts to stop them from kidnapping her sister as well. In order to escape, she builds a mechanical horse she names ‘Gherkin’ to escape on, with an evil personality and bent on cause destruction and fear. Gherkin works as a great sidekick to Scarlett, as they are bipolar opposites with her being optimistic and cheery, even if she does have an odd fetish for punching people. Its really nice to see a strong independent female protagonist for a video game that isn’t a damsel in distress, that doesn’t have ridiculously huge breasts, isn’t sexually promiscuous and has likeable personality. Its very rare in video games to see characters like this, so its really refreshing to take control of Scarlett. With the theme of horses, bright colours, easy difficulty and the female princess lead I feel this game is more targeted to a younger, female audience, but it doesn’t really matter because this game is really enjoyable for everyone, and will most likely make you laugh a few times. 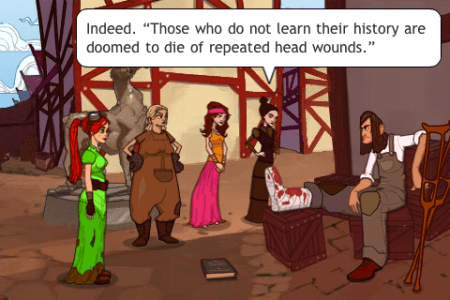 Scarlet will encounter alot of interesting characters along her journey, some more bizarre than others.

Like all point and click adventures, controls are simplistic: all you have to do is touch where you’d like to go, and that’s it. You will need to occasionally drag items from your backpack to interact with things, but that’s it. It’s disappointing to see that there is next to no options for this game at all. Items would’ve been nice to collect for extra points, or a image gallery for the commentary or a time trial or any other modes or options would’ve been nice rather than just the game by itself. The only thing other than the game itself is a really interesting commentary. If players select to turn it on, they will see a ‘!’ symbol in certain places, and can click it to hear trivia about the making of the game, and if your not keen, its always optional to turn it off. After reading them you gain an even bigger appreciation and understanding of the effort that went into making this title. These are really interesting reads, more games should do things like this more often! 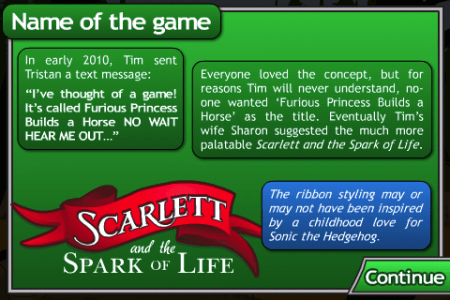 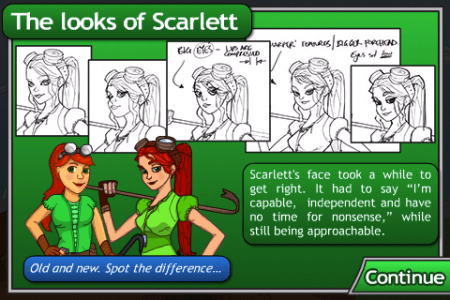 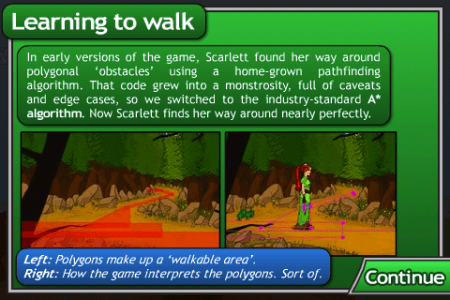 Above: A few examples of the very interesting commentary found throughout the game after turning it on in the options menu. A smart and interesting option to have!

A lot of thought seems to have gone into the plot, as it is very intriguing. It’s just so disappointing that it is such a short game. I finished it within about an hour and half. To make things worse, most puzzles are ridiculously easy to solve, with not much of a challenge at all. They get a little harder near the end, but not by much. Also, its impossible to loose the game, so if it wasn’t for such an engaging script keeping the characters interesting, I would’ve been more apathetic about what would happen. It would’ve been much more engaging if this title was a much longer game, rather than just the first, short part of an on-going series. If all these short titles were together as one big one, it’d probably be much more rewarding. That way there would have more room to get harder as it went along, with more puzzles and hopefully mini-games. 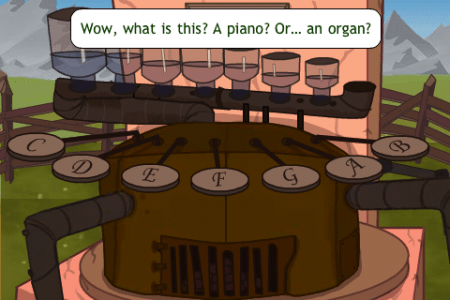 It would’ve been nice to see more interesting puzzles like this one, but unfortunately the game can be finished really quickly and there isn’t much to see and do. But everything it does have is wonderful and fun, with more quality content rather than quantity.

The soundtrack goes for a less is more approach, which works in most places, but the scenes with music are the most intriguing. The graphical style is beautiful and fun, and the character design is superb. What keeps the story interesting is its comedic value, its very humours and will more than likely make you giggle a few times, as it has a couple of great one liners. 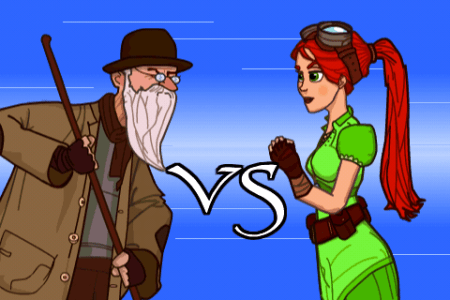 This show down ended with me being told that my answers were “mostly cleaver, but with a sprinkle of stupidity”

Scarlett and the Spark of Life is a great game, however it is the lack of content and length that lets it down. It has great characters and script, its really funny and its guaranteed to give you some enjoyment, but within a few hours, you will have experienced all it has to offer. If it was longer and had more to do it would be an easily must-have. If you do pick up this game though, you will probably be looking forward to episode 2 and the looking really forward to the next instalments as much as I am: a lot. It just sucks we’ll probably have to pay another 1.90 cents for just two hours of game play and no replay value just to see what will happen to our beloved princess. 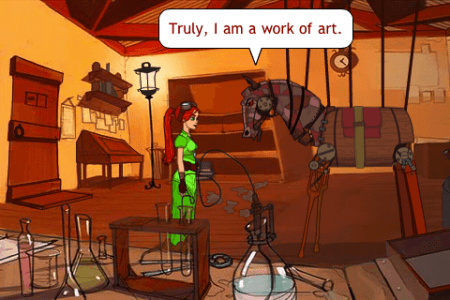 This screenshot  sums up Scarlet: And The Spark Of Life: Episode One perfectly.