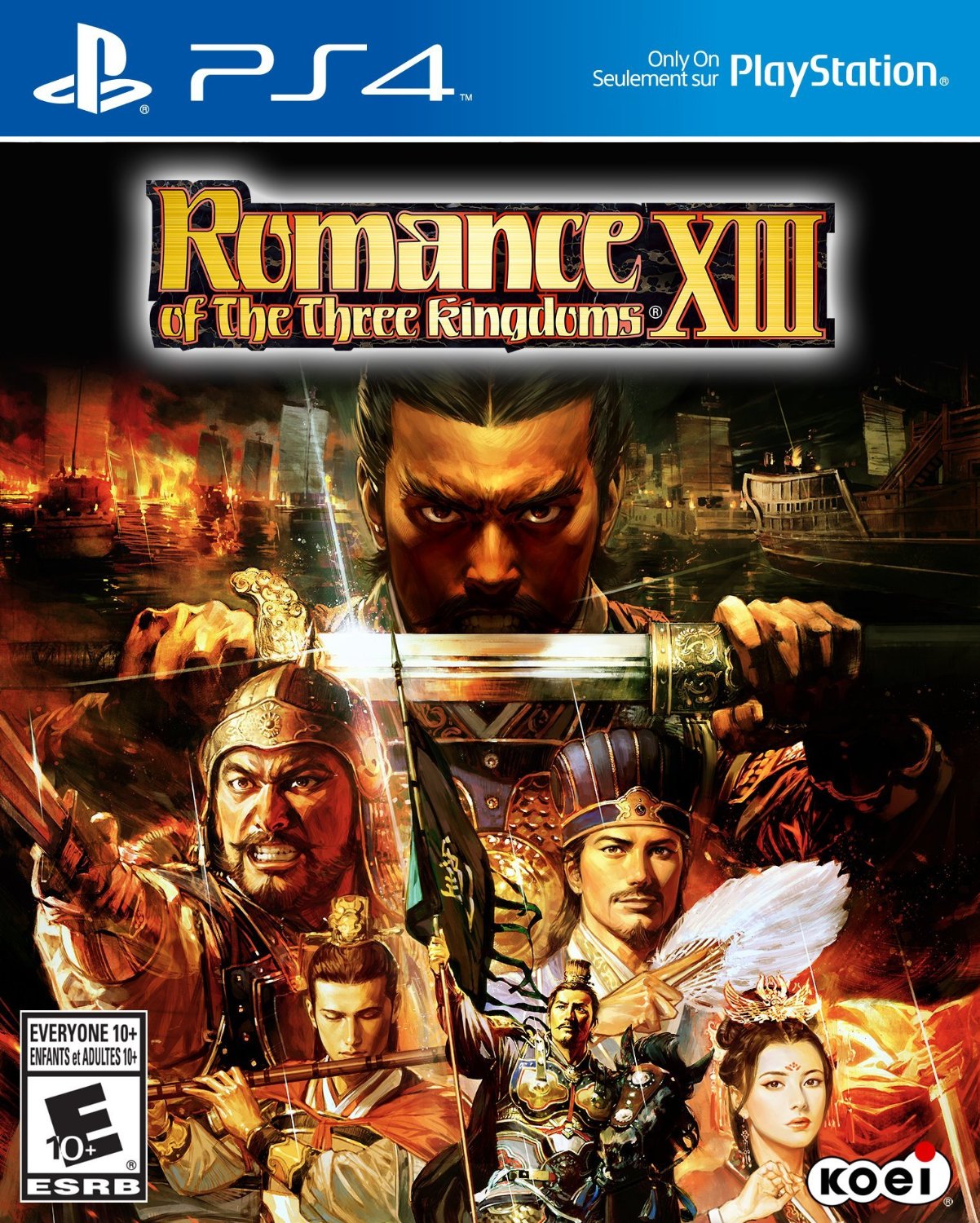 Romance of the Three Kingdoms XIII

In an effort to ensure that those who play this game are given a way to acclimate themselves to the various complexities of the mechanics, Koei Tecmo has developed an interesting story mode for the game that is also designed to be a tutorial. This is called Hero Mode and covers the detailed history of the Three Kingdoms by walking players through various features in the game while also going over the various large scale events such as how certain groups came to power, famous warriors met one another, and how empires fell. 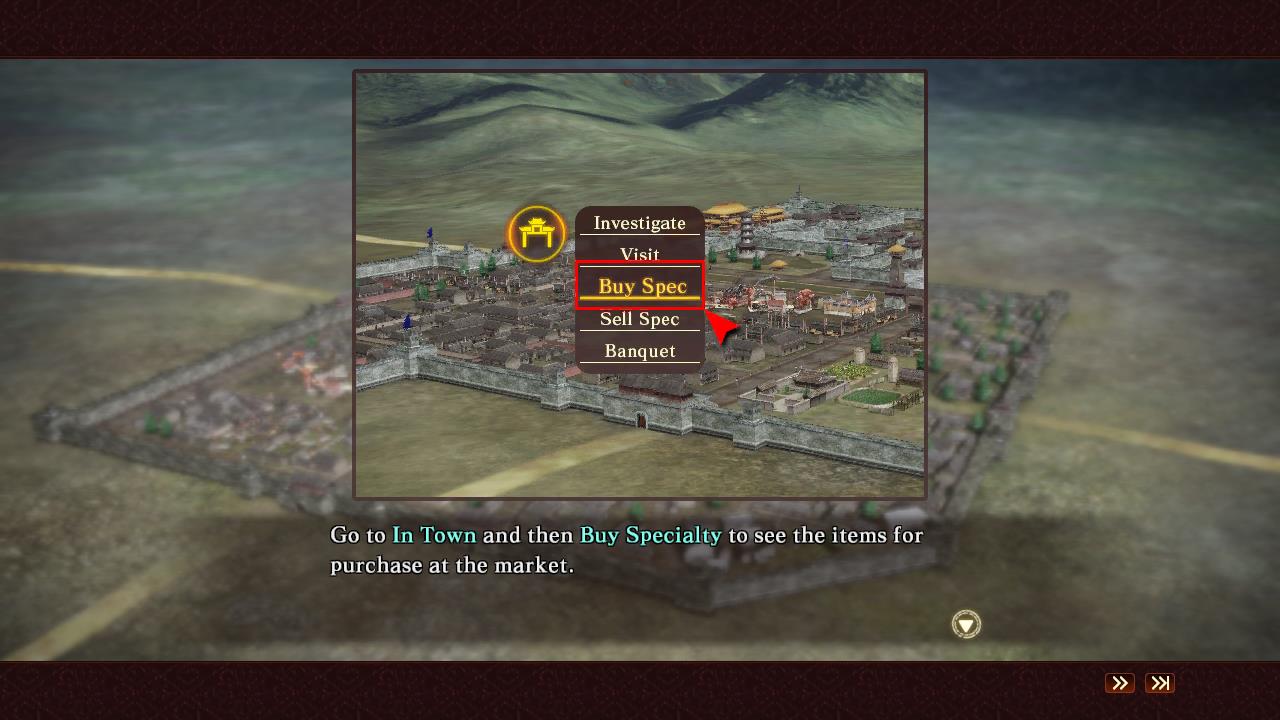 By telling players the story through the tutorial the game helps acclimate newcomers to the series in more ways than once as it serves as an entry to what can be a very complex game as well as tell the story that most fans of the franchise are already more than familiar with at this point since, outside of “what if” events, the story remains the same. It is worth noting that thanks to every character, of which there are hundreds of unique ones, having different flavor text and relationships with other characters in history, it is incredibly easy to get overwhelmed by the amount of information that players are given at one time but generally this deluge of information rarely costs the player much if they happen to miss out on any of the smaller details.

When players begin the game outside of the aforementioned tutorial/story mode that is the Hero Mode, players will be given a number of major events to start the game from, starting with the Yellow Turban Rebellion. These options will change the initial lay out of the various nations that are warring for power in China as well as what historic events will take place. These can all be tweaked by allowing historic characters to appear in random cities or to allow the AI to act freely rather than historically, creating a new path of fiction. 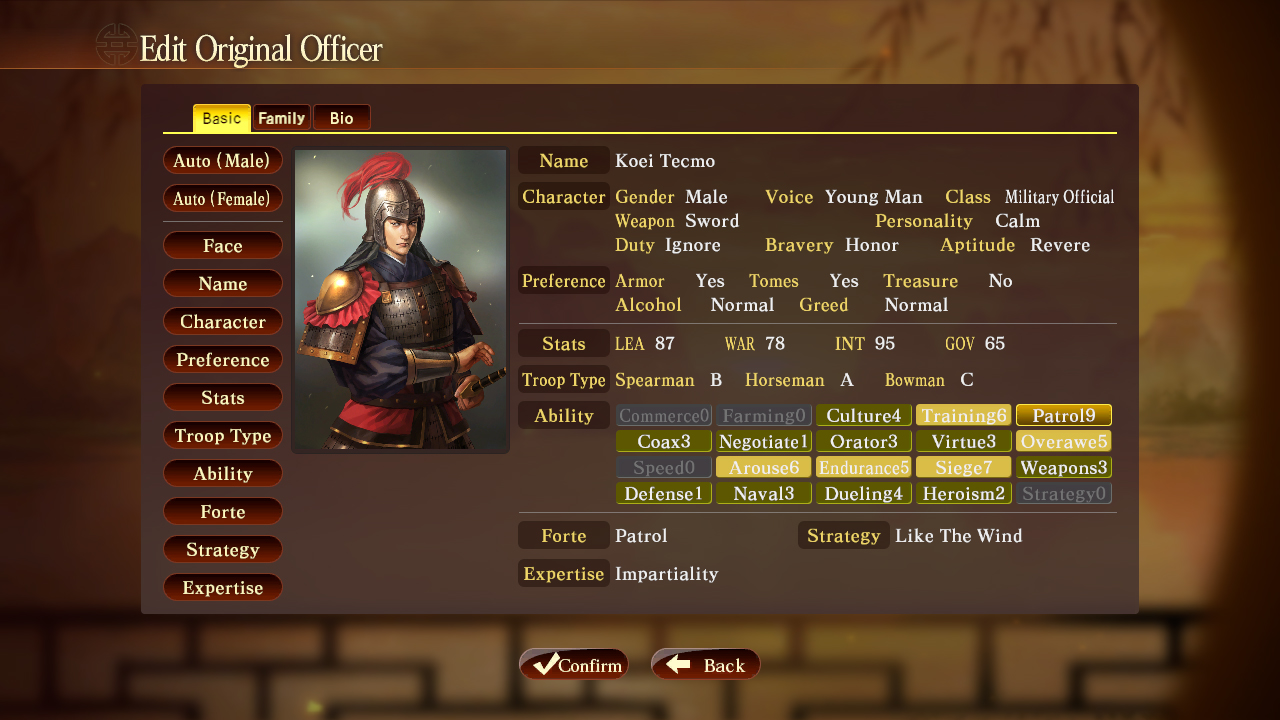 This can be transitioned into the Edit Officer aspect of the game as well. Players can freely create a number of characters, modify their stats as they see fit (ranging from creating a warrior to a strategist to completely maxing out everything if you feel like it), and even set up their history with other characters in the game, meaning you can already establish yourself as a sworn ally or enter a relationship with a historic figure.

Before entering a scenario players can choose to select from a list of recommended officers, select from the hundreds available, or choose their custom officers. This allows for players to do everything from setting themselves up as a ruler of one city hoping to expand or even start as a mercenary that is looking for a new master to follow. Depending on the role the player takes they will find a number of options available to them and while you might only play a small role as a low-ranked soldier, your actions can begin to affect your stationed city and even allow for you to rank up in the kingdom and eventually make bigger changes when you earn the trust of your fellow officers. 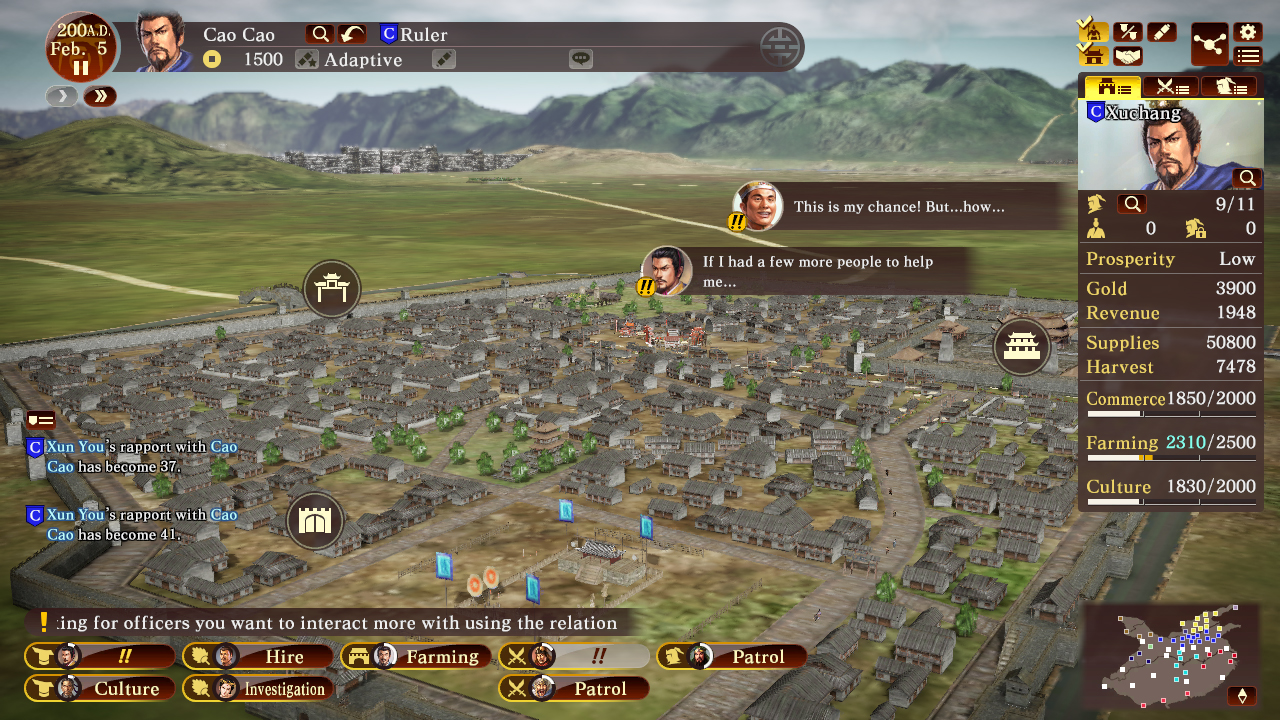 Those who place themselves in complete positions of power will often find themselves juggling a number of aspects of the game as they seek to try and build up a city’s commerce, farming, and culture while also trying to train soldiers in an effort to unlock more elite forces, balancing the fealty of your people by going on patrols, and also trying to keep nearby villages happy and not swayed to swear loyalty to a rival kingdom. This balancing act makes for quite a few hectic scenes that can take place, especially thanks to the fact that this title is so full of menu navigation that players who aren’t used to that kind of thing will find it quite daunting, but thanks to the Hero Mode walking through most of the things that can occur and the ability to pause time to try and sort things out, the overwhelming amount of tasks to keep an eye on can be manageable most of the time.

Romance of the Three Kingdoms XIII offers a number of different options when it comes to facing off against other nations. Players can opt to simply go to war, which can be rather damning at times since being unprepared can lead to some dire circumstances such as facing off against a well-prepared force that is eager to steam through your territory with over ninety thousand soldiers, or they can take a more diplomatic approach by building trust with other officers and even marrying in an effort to keep the peace. The game features a graph that allows for players to learn who each officer is familiar with and then by becoming friends with them, you can grow your network of potential allies to a massive extent. 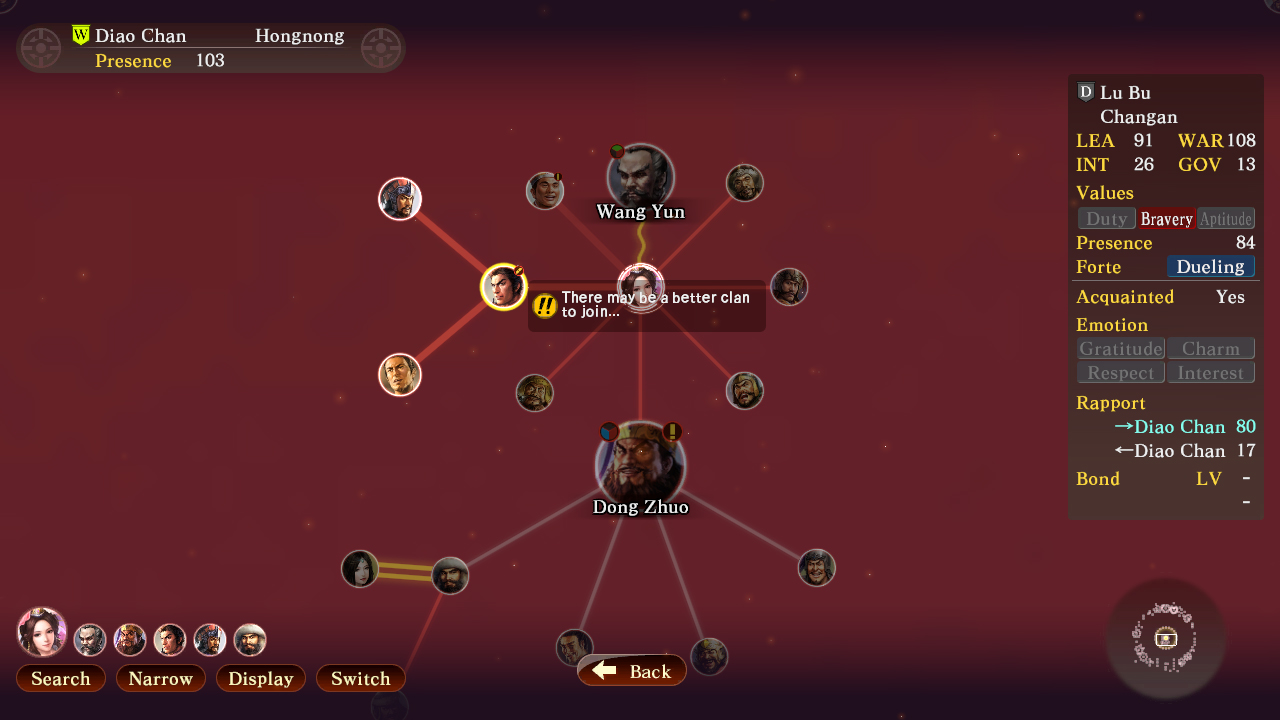 Of course when everything comes to head, most of the time you will need to take to the battlefield to put an end to things. When entering into a battle players will either wage war in a field where bases are split between their force and the enemy force or at a castle where they will either be on the defense or forced to lay siege, using items such as battering rams, siege towers, and ladders to break down gates or avoid them altogether. These battles can be incredibly hectic to control, primarily thanks to the simplistic controls that are given to the player and the widely inconsistent camera angles making it difficult to select a certain force instead of simply selecting multiple units as a group.

Morale plays a heavy role in combat and by listening to your allies suggestions, such as defending a base or flanking an enemy unit, can temporarily boost your own company’s morale while surrounding or pincer attacking an enemy can force theirs to plummet. Units that are almost entirely out of morale will begin to flee and this allows players to devastate their troop count and eliminate them from a battle. Occasionally in battle, and outside of it as well when on patrol or taking on other objectives, players will find themselves placed into a duel with a rival officer. 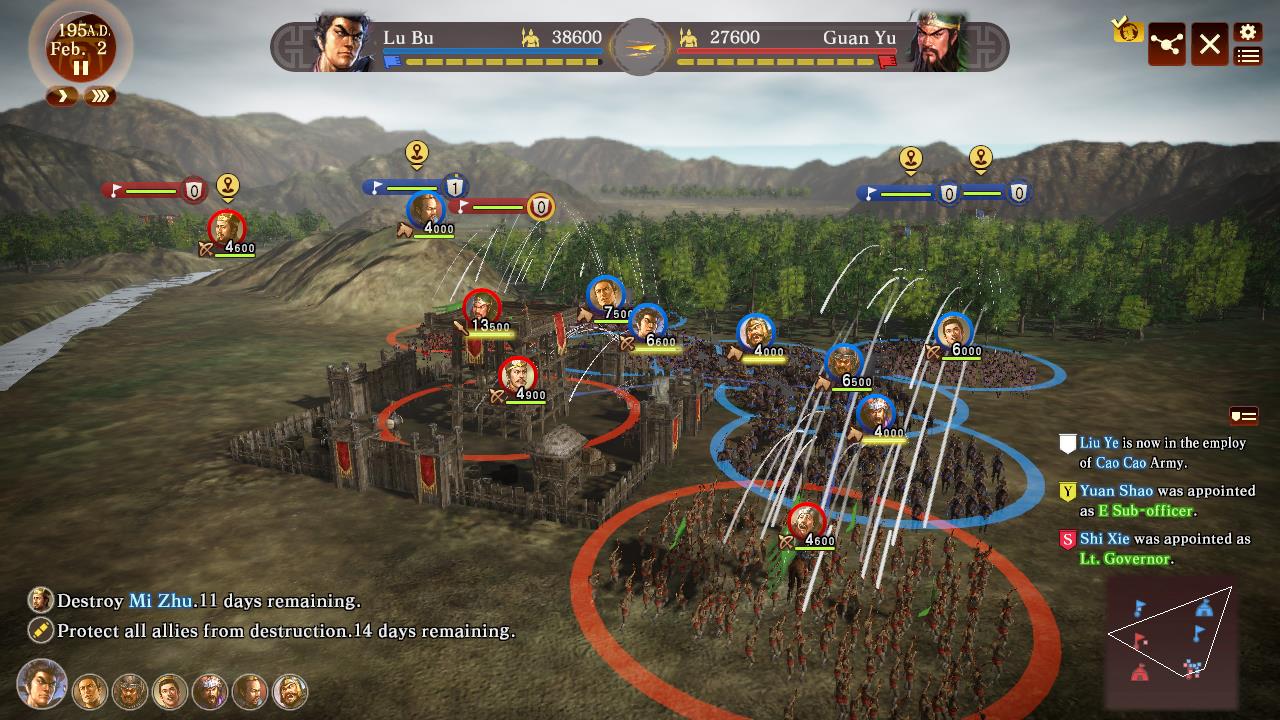 These duels are five turn mini-games where the officers will clash and then use various types of attack and defense to overcome their opponent. This includes the likes of performing basic attacks, attempting to unsteady your opponent, or even focusing to try and use a special attack. If neither fighter wins by the end of the five rounds the winner is determined by their health meter. Various stats such as an officer’s skill in duels and other stats will play a role in how much damage can be dealt and this is mirrored in the “debate” duels. Following the same guidelines, players will need to talk down an official, either to sway a decision in your favor or to secure a village, and make use of assertions, rebuttals, provocations, etc. to prove your point.

This element is unfortunately fairly limited as both duels and debates can play a major role in the outcome of a battle, as defeated officers will cause a ripple effect across a battlefield but more often than not the outcome appears more random than anything else. In fact, when your own unit isn’t participating in a duel and one of your allies is instead, the ally AI will almost always fail even if they have a distinct advantage.

By featuring a massive amount of unique units one would wonder just how far a company would go to make sure they all stand out in some manner and when it comes to Romance of the Three Kingdoms XIII it turns out, quite far. Almost every single officer players encounter are represented with gorgeously drawn character portraits, though it is worth noting that a couple portraits do place the character in a rather strange pose that usually don’t fit the situations they are shown in. Outside of the character portraits, players see practically everything at a distance and everything ranging from the designs to the cities to the battlefields players fight on is simplistically designed. 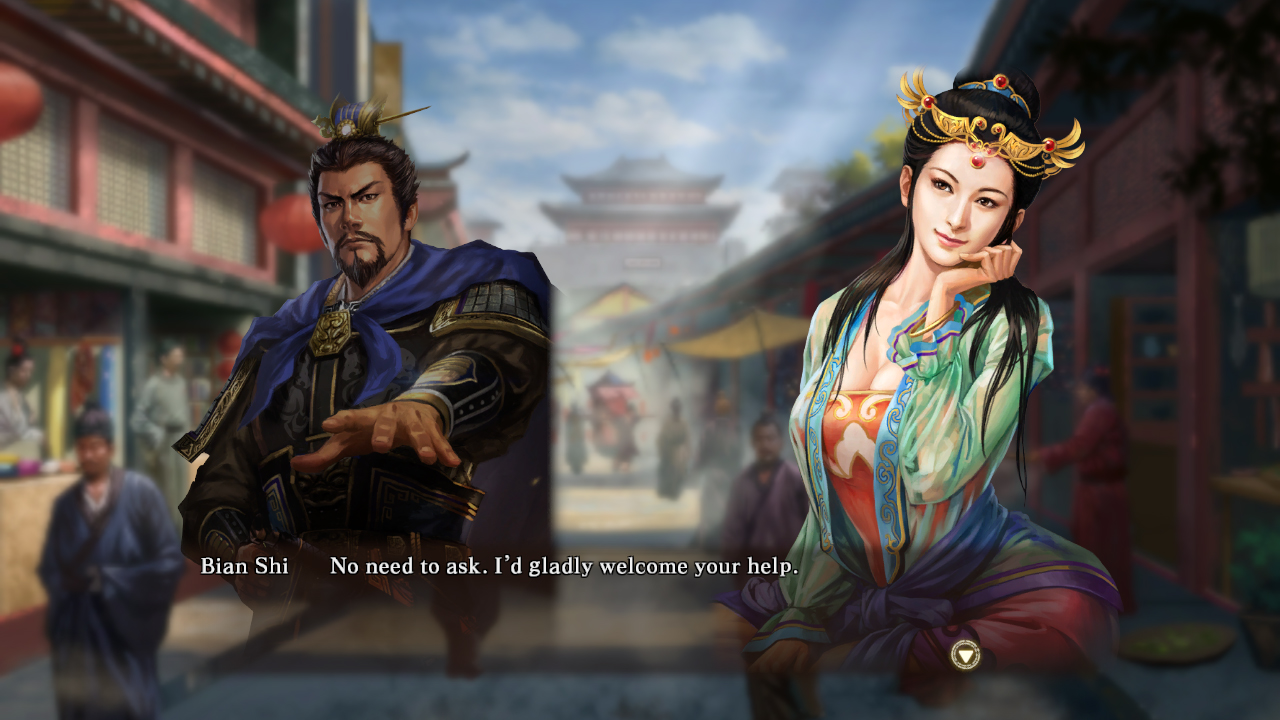 As far as the voice tracks are concerned, players will be able to choose from either the Japanese voice track or the Chinese voice track if they feel like going with the authentic experience. The soundtrack features a number of period fitting tracks that range from calming tunes while traveling between cities and while residing in a city and some more action oriented music, albeit nothing too heavy compared to the Warriors version of the game, during combat.

Romance of the Three Kingdoms XIII is a rather hardcore strategy game that allows players to tackle as much responsibility as they feel like they can handle at any given time by either jumping into the deep end as a leader of an army or starting out as a free officer. That being said, although the various mechanics are explained well, trying to navigate through the numerous menus and selecting units in combat is a pain to deal with and while the game may feature some outstanding character portraits, the overall appearance of the title is quite bland which gives the title little excuse to suffer from the amount of slowdown that it does during combat.

Romance of the Three Kingdoms XIII delivers a deep strategy experience that is hindered by poor menu design and occasional issues with the controls.
7.5