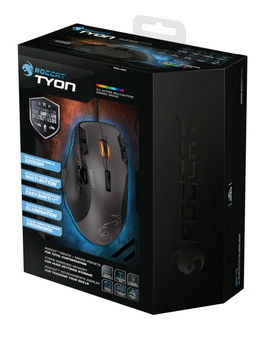 Roccat’s latest mouse is a multi-button behemoth. The Roccat Tyon is armed with 16 buttons that can be programmed with the Roccat drivers. The German gaming peripheral company is looking to differentiate the Tyon with the addition of two fin type buttons. The mouse is rounded off with an 8200 DPI laser sensor, two illumination zones, and Easy-Shift[+] support to double the number of available macros on one mouse.

The Roccat Tyon is packed in a standard Roccat-style box with a matte black and blue theme. Inside, the mouse is snugly packed with a small quick start guide. The mouse is on the light side at only 126g, with the cord itself probably adding a few extra grams. The cord is a braided USB cable with a sturdily built USB 2.0 connector. The plug is not gold plated. 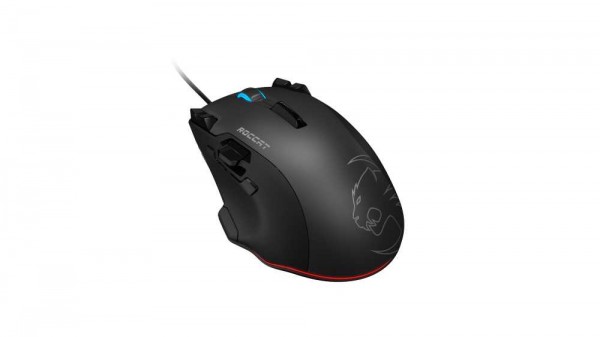 The mouse’s shell comes in black or white. Unfortunately for left handed population, the Roccat Tyon is only for right handed gamers. The top of the mouse is smooth with a slight rubbery texture. The rubbery texture has just enough stickiness to get a sure grip, without being so sticky that it is impossible to comfortably slide a finger over to one of the many buttons on the Tyon. The sides of the mouse uses a pebbled plastic texture for both the thumb rest and the buttons.

On the top of the Tyon are four side buttons, the two standard mouse buttons, the middle mouse wheel, and what Roccat calls the Dorsal Fin-Switch. The Fin-Switch does not depress like most buttons, but rather is pushed either left or right. In practice, I found it easier to hit compared to the traditional two buttons that are usually found in the same position on most gaming mice. However, the Dorsal Fin-Switch is still pretty awkward to use. The four side buttons are much better placed for most people. Though Roccat brags they spent months of “design, research, and testing” on the positioning, it is pretty clear people with smaller hands, like females and Asians, were completely forgotten about. As a person who wears men’s size small to extra small gloves, only the bottom of the four top buttons were actually within reach for me. The top two buttons were completely unusable without shifting my mouse grip completely to use. I suspect those with larger hands will have less issues with the mouse button positioning. 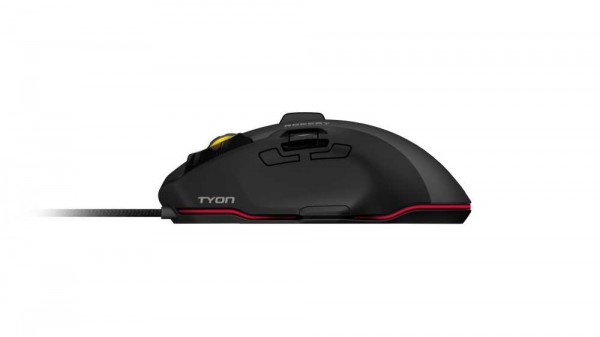 The thumb side of the Roccat Tyon is probably the best design I have come across. There are three buttons and the X-celerator analog paddle on the right hand side. On the top is the X-celerator analog paddle that is by default bound to a joystick axis input. The idea is that the paddle can be used to control the rotation of tank turrets or the thrust of a plane. Outside of games, I use the paddle to scroll through long documents for the ultimate act of laziness. It is less movement and quicker to use the paddle than the middle mouse button. The paddle is solidly built and has just enough tension to be controllable while easy to use. Located below the X-celerator analog paddle are two standard thumb buttons. I found the top button to be a little hard to push in the smaller area. The bottom button does not seem to have the same issue. The top button will probably only be an issue with smaller handed people like me, as the top thumb button was only just slightly out of reach. 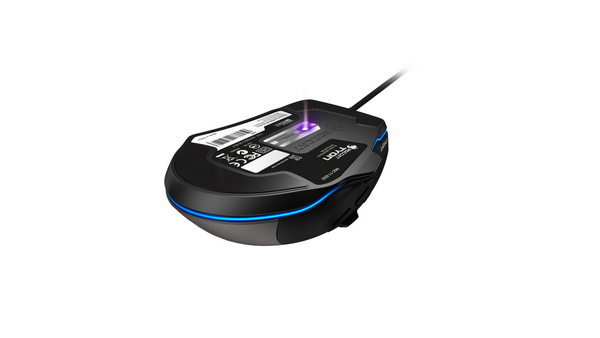 Although the X-celerator analog paddle is the feature most hailed by Roccat’s marketing team, the real winner is actually the bottom most thumb button. Instead of pushing inwards towards the pinkie like most thumb buttons, it is designed to be pressed downwards towards the mouse pad. The exact thought that crossed my mind the first time I used the button was “geez, why hasn’t anyone thought of this until now?!” The button is extremely comfortable to use. Although by default, it triggers the Easy-Shift[+] button, it is a perfect easy aim/sniper mode button. Most sniper mode buttons require some sort of rightward force to trigger, which makes fine aim adjustments especially in the left and right directions a bit more difficult. By pressing downwards on the mouse, I found my forearm stayed looser and the force needed to move the mouse in any direction was about the same. 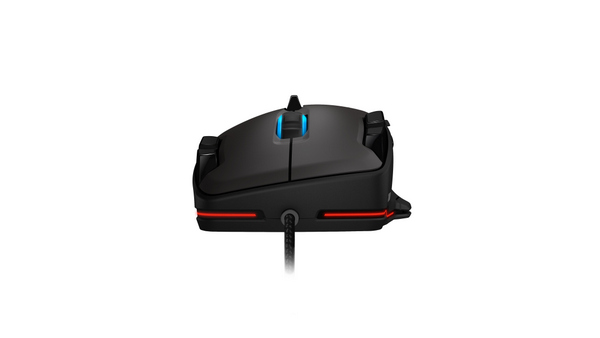 The Roccat Tyon comes armed with two separately lighting zones. The mouse wheel has two bands of light sandwiching it. The bottom rim of the mouse has a band of light wrapping the entire mouse. The LEDs are capable of 16.8 million different colours. In the firmware, users can change the two zones independently with several different lighting effects. The light can be set to a single colour using RGB colour values or the mouse can scroll through all the colours. I would recommend against using the fully lighted mode when using the scrolling colour effect. The LEDs cannot transition between colours smoothly, resulting in a very annoying “popping” effect. Using one of the lighting effects that temporarily turn off the lights at given intervals is a good way to hide the popping effect.

My relationship with Roccat’s drivers is a troubled one. On one hand, I love how much control Roccat provides its users. The macro editor is powerful and users can really tune the mouse to respond exactly as they wish. On the other hand, getting it installed can be a bit confusing. Each Roccat device has its own firmware suite that seems to communicate to each other through the Roccat Talk drivers. Initially, I installed the Roccat Tyon drivers and could not get into the Tyon mouse settings. It wasn’t until I installed the Talk driver could I actually get into the Roccat Tyon’s settings. I would really like to see Roccat switch to a single driver install that covers all their devices. 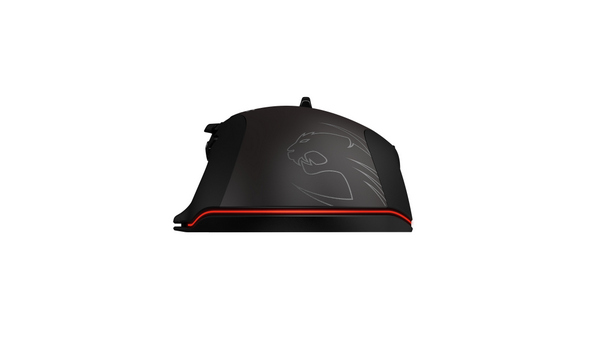 I love the Roccat Tyon, but it isn’t a mouse I can use well. The button layout is possibly my favourite of all the gaming mice I have reviewed. However, a few of the buttons are just out of comfortable reach for me. If you do have smaller hands, I highly recommend going to your local computer store to give the Roccat Tyon a test drive. Though the drivers can be a little bit of a pain to install, Roccat provides the user a lot of options to tweak their mouse. At $99.99 USD list price, it is definitely one of the more expensive wired options out there, but heavy macro users will love the Tyon.