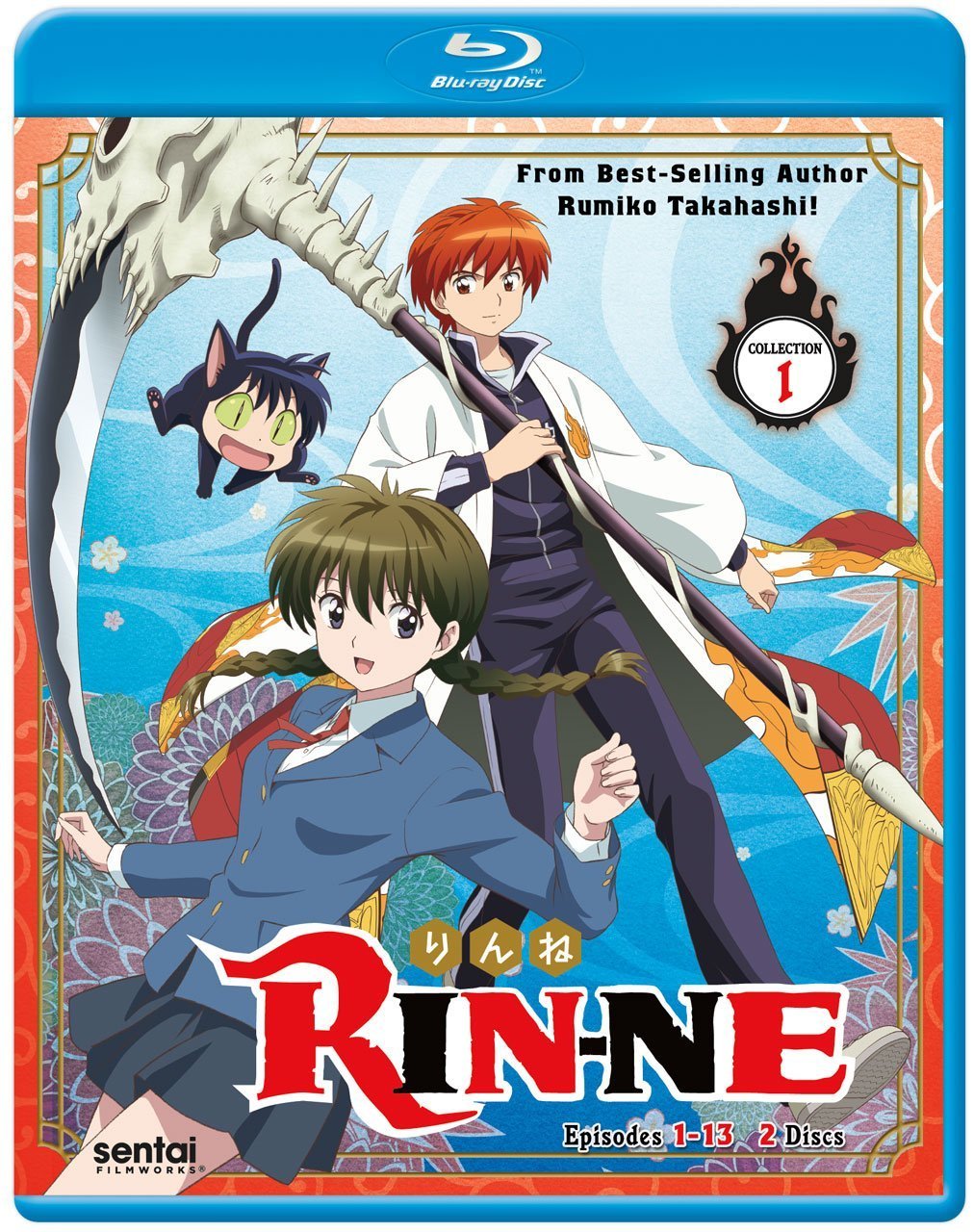 Rumiko Takahashi may not be a name that your average anime fan would recognize but they will likely recognize at least one of her many popular works. After creating popular older series such as Urusei Yatsura, Ranma ½, and more recently InuYasha, generally any anime fan has seen the type of storyline that she can create. Now Sentai Filmworks has begun to release the anime adaptation of her most recent work, Rin-ne. With the first thirteen episodes currently available on Blu-ray, is the series worth starting?

Sakura Mamiya appears to be your average teenage student who attends classes and has a fair amount of friends like anyone else. Well, unlike everyone else Sakura has the ability to see ghosts and various other types of spirits. While viewers are initially given a clue as to why this might be, Sakura has lived most of her life with no idea as to why she can see these spirits that no one else can see. One day while attending class, her usually absent classmate Rinne Rokudo appears wearing an extravagant looking haori. 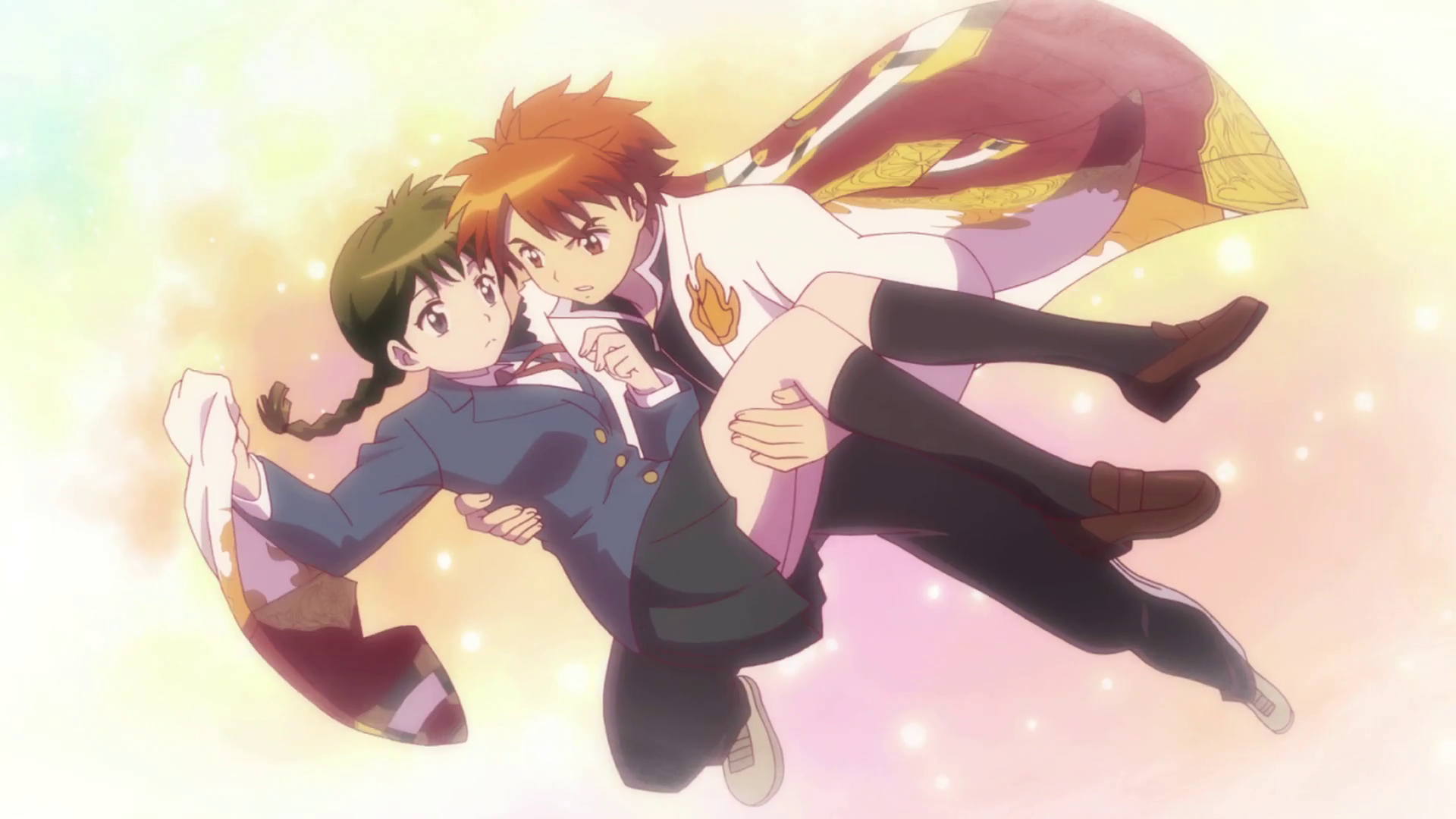 Although his appearance is rather surprising for Sakura, it gets even more outlandish when she realizes that not only can no one else in the class see him, but that Rinne is dealing with an oversized spirit of a Chihuahua. The next day Rinne returns but this time everyone treats his appearance as something special since it is the first time that many of the classmates have even seen him. This leads Sakura to wondering what exactly Rinne is and after speaking with him and dealing with a fused evil spirit that results in the pair traveling through a realm between life and the afterlife, Kyoukai.

It is here that the pair learn about one another’s abilities and a little bit about their past. Rinne is a child born of a Shinigami and a human thanks to his grandmother and thanks to this he is tasked with guiding spirits to the afterlife while also exorcising anything evil while Sakura once was brought to the realm through the trickery of a “Damashimigami” that use tricks to meet their quota by forcing living beings to pass on and along the way was saved and treated by Rinne’s grandmother, giving her the ability to see spirits. 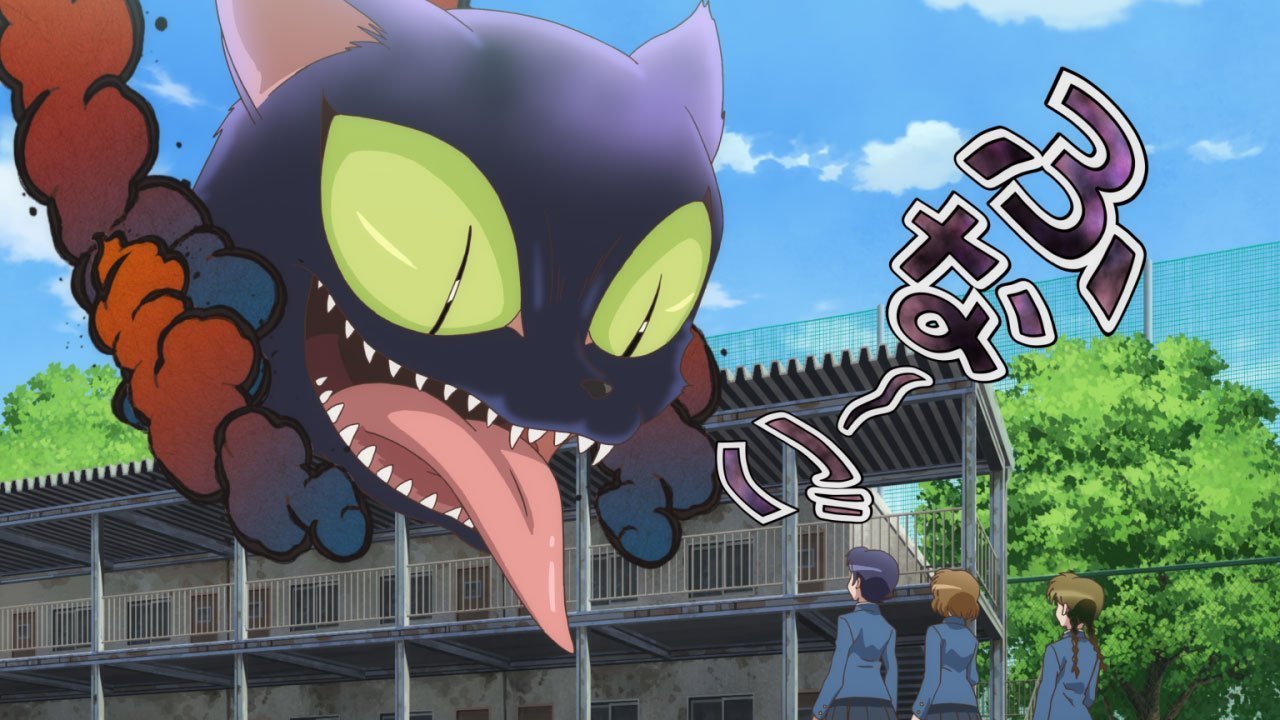 After this initial introduction, Rin-ne begins to settle into a fairly enjoyable pace of introducing various spiritual elements such as new ghosts or demons that need to be exorcised or bringing in people from the two main characters’ pasts. This means that the title settles for a more Ranma oriented pace than InuYasha as various characters are introduced and then appear as minor roles in later episodes. This includes the likes of an amateur exorcist who became infatuated with Sakura at a young age because she could see the same spirits he could, a demon that Rinne caused problems for as a child who now wants revenge, and eventually, near the end of this first half, introducing Rinne’s sleazeball of a father and another female Shinigami who will likely serve as a potential rival in the future.

Thanks to this style of storytelling, viewers will find that Rin-ne’s simple pacing makes for a pleasant show to watch but also one that is in absolutely no hurry to develop in any meaningful way. While we do learn a little bit about Rinne and Sakura through their interactions with other characters, each of the cast members is boiled down to a simple point that is primarily used for comedic purposes though in the entire cast Sakura is the worst offender. 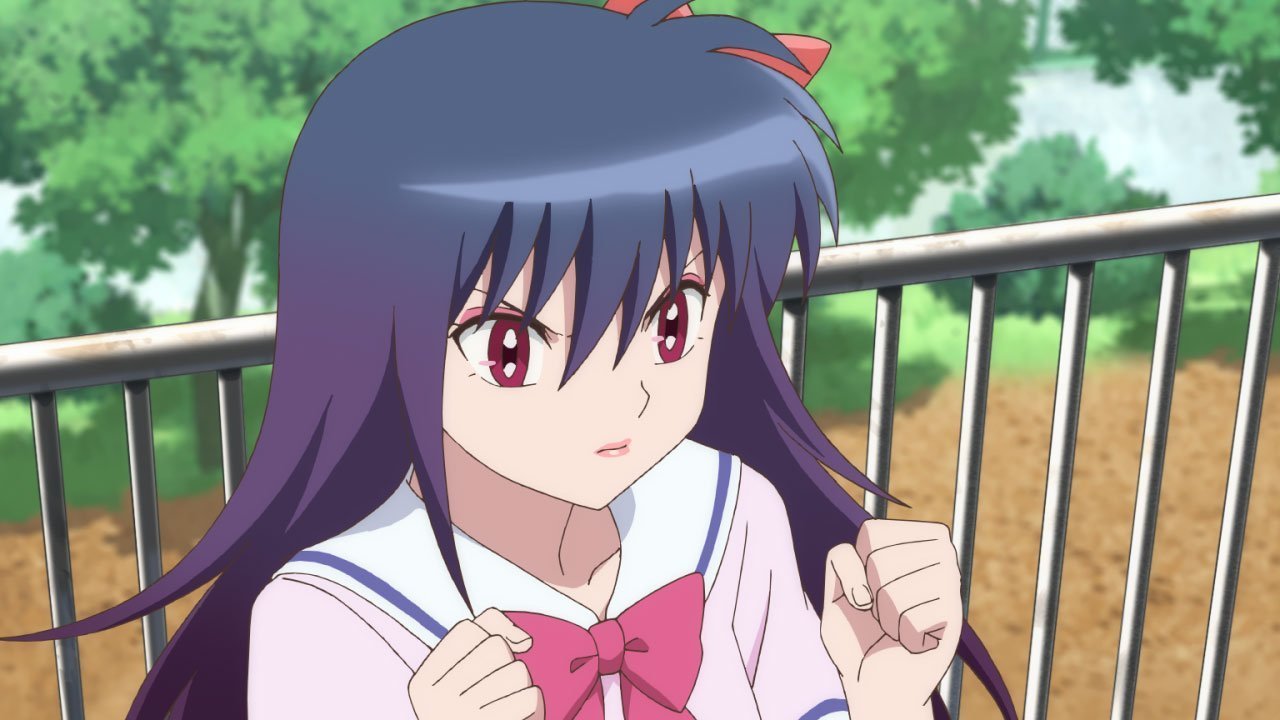 This is due to the fact that her character so far is portrayed as being entirely nonplussed by any situation that comes her way. While she already has a thick skin to most of the supernatural world thanks to living with it for so long, no matter what happens the girl refuses to betray any type of emotion outside of the occasional spark. As for the rest of the cast, Rinne’s jokes come from the fact that he is incredibly poor and is a penny-pincher when it comes to using exorcism tools, meaning that he is often seen lamenting the use of cash to the point of crying blood, Rinne’s grandmother lashes out at those who call her old, an old demon from Rinne’s past is idiotic to the point that characters question whether or not anything he does is a trap or simply a mistake from his idiocy, and so forth.

Thanks to this boiled down nature viewers will see very little development regarding the characters or even the romantic feelings that are obvious between Rinne and Sakura but never acted upon in any way outside of the occasionally “mysterious feeling” of jealousy. The world around the characters does blossom rather well thanks to the amount of different mythologies explored, though viewers shouldn’t expect a whole lot of consistency when it comes to the various background characters as they often act wildly different about the supernatural happenings around them. Despite already knowing of some of these elements characters will act surprised and run away in fear while new events will happen and they will react in a completely unsurprised manner similar to Sakura. 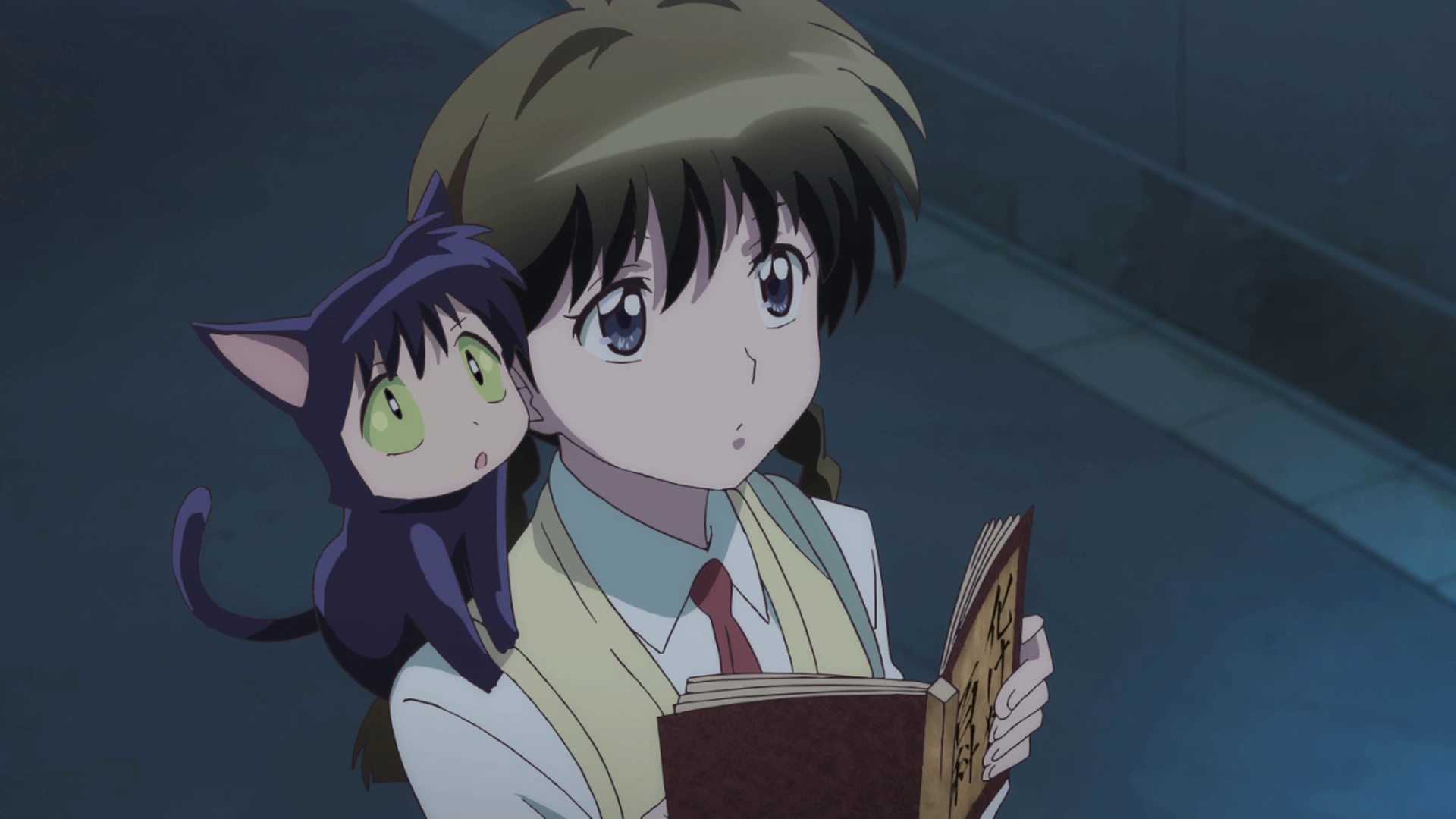 Despite these faults, Rin-ne still manages to be an enjoyable series thanks to some witty writing crafting plenty of genuinely funny moments. Rumiko Takahashi is well known for her style of humor and it comes off extremely well here thanks to the plethora of myths, legends, and even urban legends that she can dip into to keep bringing in entirely new humorous conflicts for the characters to deal with. Along those same lines however, even at its best moments there is never any feeling of tension during these conflicts thanks to that same reasoning.

Rin-ne manages to feature an art style that looks rather impressive initially thanks to some decent detail put into the key characters’ designs and hair styles but slowly loses its impact over the course of the show. While the designs of the various spirits that appear remain fairly true to what fans should expect given the myths and legends, the actual animation accompanying these designs is as simple as they come. 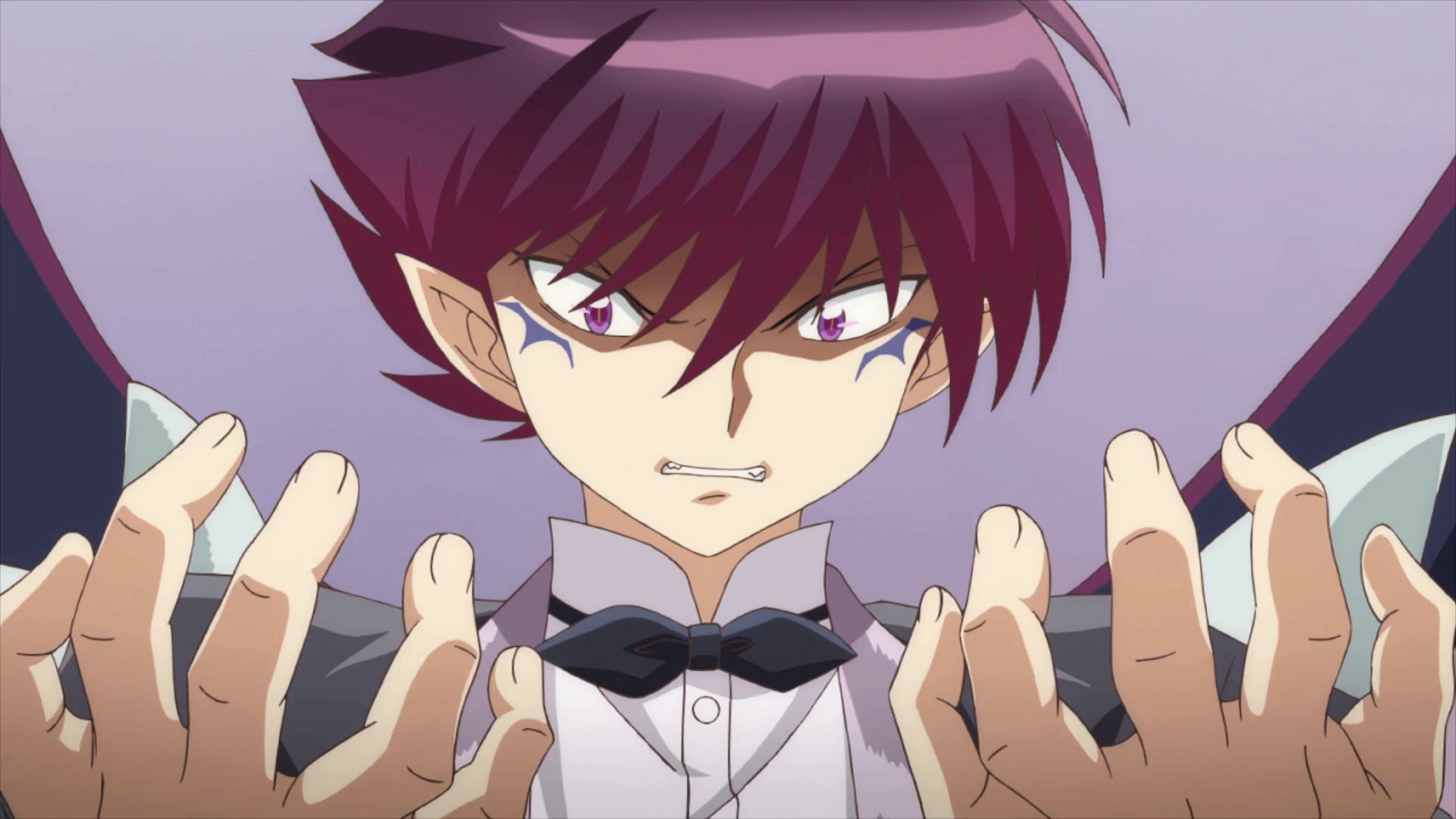 This leads to a number of scenes that appear fairly generic and even though this Blu-ray release does increase the vivid appearance of the coloration used in most scenes they still feel a bit flat at times.

Sentai Filmworks has chosen to release Rin-ne with only the original Japanese voice track. While this may disappoint many who are used to hearing her works with an English dub, the Japanese nature of many of the legends and ghosts discussed in the series does lend itself well to the original Japanese cast. It also helps that the Japanese voice cast are very fitting, with Kaito Ishikawa handling Rinne’s personality perfectly. 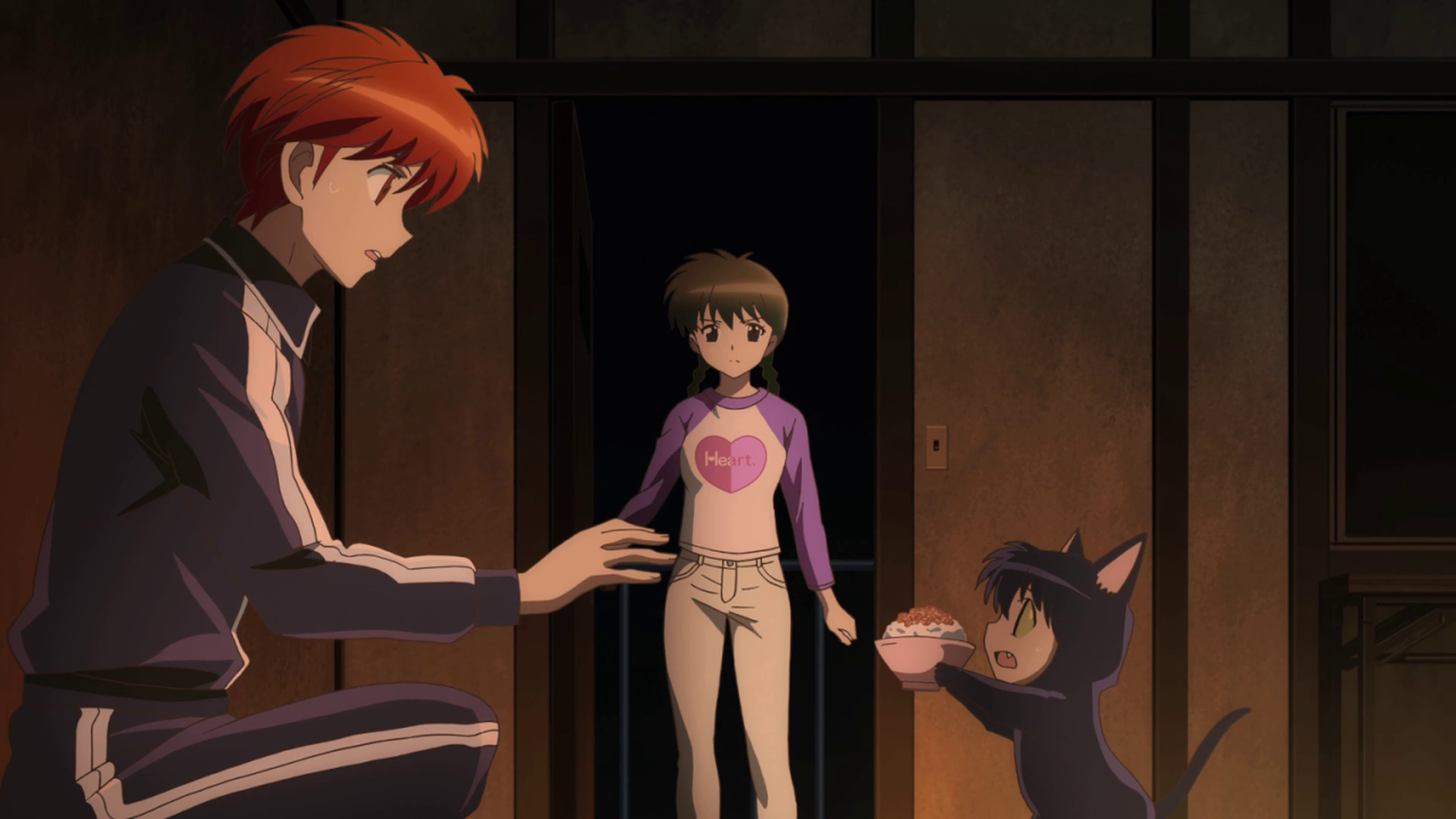 As far as the soundtrack goes, the background music is fairly standard for a series such as this and doesn’t really offer anything too surprising. The opening theme is “Riot of the Cherry Blossoms” by Keytalk while the ending theme “Ring of Time” by Passepied sound decent but don’t stand out in any real way.

When it comes to Rumiko Takahashi’s Rin-ne it is nearly impossible to not compare it to her past works primarily since she utilizes so many elements that viewers of her series have grown familiar with over the years. Rin-ne quickly finds itself a solid and comfortable pace that while enjoyable more often than not, refuses to really go anywhere or develop in any meaningful way over the course of the first thirteen episodes of this first season. This means that while the comedy may work well most of the time, those looking for any type of progression will be left wondering when the real story will actually kick in during the second half.

Rin-ne Collection 1 is a rather humorous but fairly standard start of a series from the famed Rumiko Takahashi and while it manages to be moderately enjoyable so far, whether or not the stagnant nature of the series can keep it together going forward is yet to be seen.
7