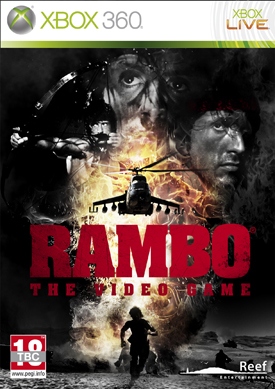 The Rambo series of movies are one of those cult 1980s action flicks that everybody talks about and remembers fondly. Sylvester Stallone’s John Rambo was the kind of shoot first and ask questions later kind of guy that people love to watch on screen. Now, more than 30 years after the original Rambo film we get; Rambo: The Video Game, a prime example of why many view licensed games as nothing more than cheap cash-ins. 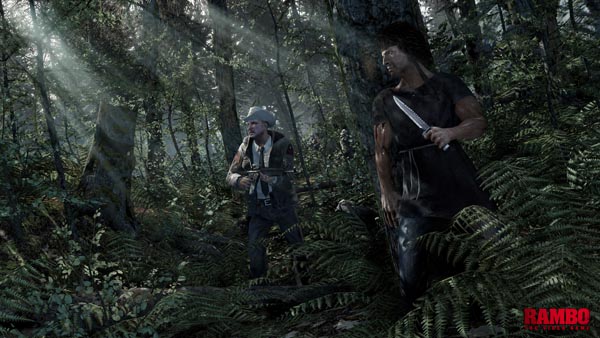 Rambo: The Video Game takes place during the events of the first three Rambo films, and tells the story of John Rambo and his exploits. The premise of the story is tied together as a eulogy at John’s funeral, but it quickly becomes apparent that he isn’t dead, which leads into the game’s final missions, set during Rambo III. The Rambo story is pretty iconic nowdays, and the faux-funeral is a nice way to string them all together, but really you will have a much more enjoyable time if you just go out and buy the Rambo box set. 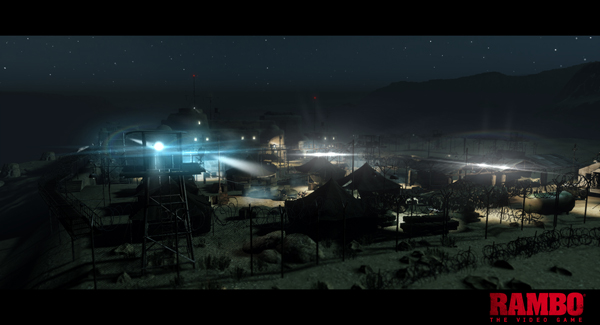 Rambo: The Video Game is an on-rails shooter that is heavily inspired by the old Time Crisis light gun games that you would have found in the arcade during the mid-90s. The main problem with this is that it doesn’t offer light gun support and instead you have to control your aiming reticule using your controller’s thumb stick (or your mouse if playing on PC). You don’t have any control over Rambo as he ducks and weaves around various obstacles, or you know when he is just standing completely still in the middle of an open area. Your own methods of control are to duck into nearby cover (if there is any), aim and fire.

The game does also offer a co-op experience, but it is almost worse than the single player one. Instead of playing as another character (or even a clone of Rambo), player 2 simply controls a blue aiming reticule. That’s it. No gun on screen, and Player 1 still has total control over when they go into and out of cover while Player 2 is just along for the ride. 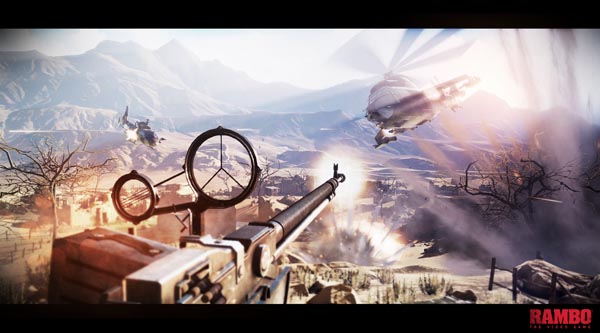 When you aren’t aiming a reticule at wave after wave of shooting-gallery targets disguised as soldiers, Rambo has you partaking in quick time events. No, you read correctly – Rambo: The Video Game is a mixture of 90s styled shooting gallery, and quick time events. Worse than that, you can unlock a perk that allows you to automatically succeed any QTE section, meaning that you can just simply watch the game play itself right in front of you.

The game also has a meager 2.5 hour play time. There are extra difficulty options and the chance to replay missions at your leisure once you have unlocked them, but many players wont find any desire to do this. 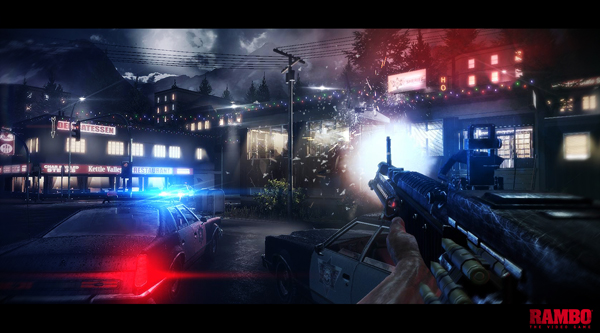 Ok, I want to say something good about Rambo: The Video Game. It takes some impressive set pieces straight of the films and faithfully recreates them for use in the game, either in cinematics or actual gameplay sections. However, it becomes a wonder as to why these cinematics aren’t just the clips from the movies themselves, as the visuals used in this game are way below what was expected.

Honestly, Rambo looks like it is a game that was made for the PS2 era of gaming. Environments are blocky and lack textures, and character models are not only ugly, but are repeated over and over again. Areas would often be littered with a bunch of enemy clones. Worst of all is the fact that Rambo himself has probably the worst character model in the game. He looks little like a young Sylvester Stallone, and the model that makes up his limbs looks a lot like sausages all joined together. During the actual gameplay this isn’t a problem as it is a first person experience, but during any kind of cut scene that has John moving around, it is really unsettling to watch.

The voice work in this game is… well it is unique to say the least. Sylvester Stallone didn’t record any lines for the game, so instead all of his dialogue are just audio snippets from the films that are played whenever he is speaking. This should add a sense of authenticity to the package, but it just ends up sounding dry and forced – especially when everyone else has been recast and has actual voice work. Rambo’s voice isn’t the only one that has problems. Characters will repeat the same snippets of audio over and over and over again. Whenever you beat a level you hear the same speech, whenever you lose you hear the colonel yelling “John!” It all adds up with the poor visuals and lackluster gameplay to create a package that gets less and less appealing by the second.

One last thing about the audio; you know that iconic Rambo musical flourish? Well I hope you enjoy it, because you will hear it… a LOT. Much like the character and enemy voices, the same string of music is played ad infinitum to the point of exhaustion. 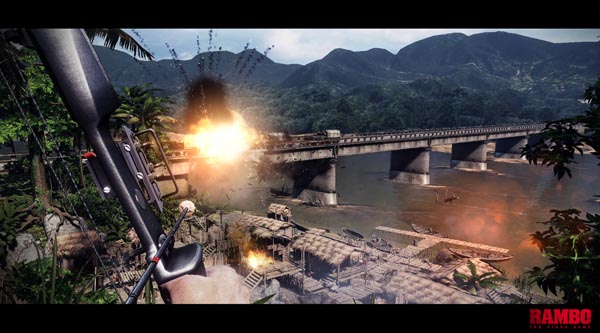 Licensed games have copped a bad rap for years for being cheap, lazy productions that often poorly made in an attempt to garner a few extra dollars from a popular franchise. Rambo: The Video game is the absolute epitome of why people everywhere have this notion, and it seems to wear that fact proudly on its chest. Cheaply made, poorly programmed, nonsensical, and just plain unfun, Rambo: The Video Game really is your worst nightmare.