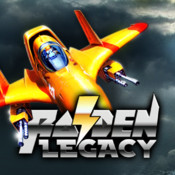 DotEmu is a French developer known for bringing classic video games back to the fore through the marvels of the iOS app store and the touch screen applications of your every day iDevice. They’ve now turned their attention to the Raiden arcade franchise.

Does Raiden Legacy rocket superbly onto the app store, or does it crash before take off? 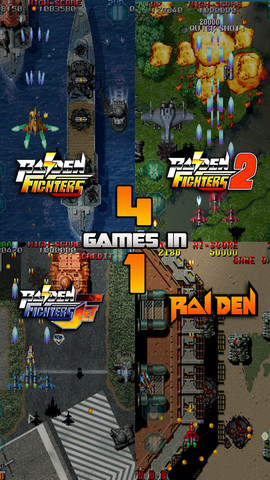 So how does the game actually play?

Well you’re a jet with a gun. Enemies appear from the top of the screen and attack you using everything from guns, missiles, to ramming you in the face. Your jet moves forward through the landscape as all this is happening. 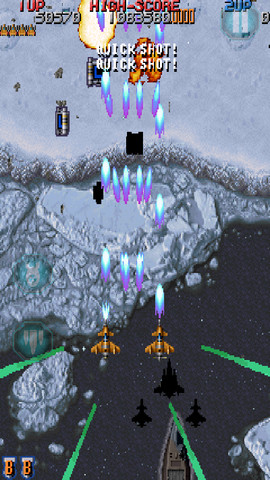 Moving your jet left, right, up and down is as simple as tapping it and just sliding it in whichever direction you want it to go. While this may not feel as arcadey a classic joystick and button combo, it really fits the platform and just feels right. My only bother with it is that your finger will occasionally block your view of some of the smaller projectiles coming your way.

As you destroy enemies you’ll be able to pick up power-ups that generally increase your firepower. So though you only start with one measly gun, you can end up as a swirling death machine, spitting out missiles, bombs, bullets, and having a few bot controlled jets alongside you to help you out.  When you get to that stage, it is seriously impressive how much damage you do. You’ll probably feel so god-like that you’ll get cocky and let that little tank in the corner take you out… oops, time to start over. 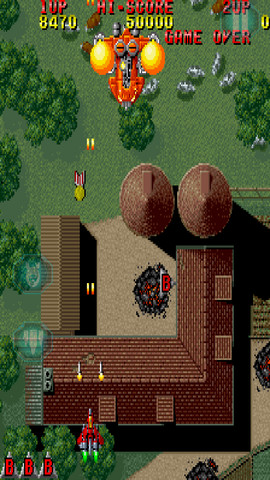 The game is seriously addictive once you’ve put in your digital (and entirely theoretical) token into the machine. You’ll want to keep going to finish off that boss, get a higher score, or just to see what else there is to blow the hell up. On top of that, since Raiden Legacy features four games and all their various levels, it’s not like you’ll be getting tired of repetitive environments any time within the first few weeks after you’ve picked up the game. Thrown in leaderboards and Game Center integration and you’ve got a hell of a lot of reasons to keep coming back to the app.

Raiden Legacy is an arcade port that has been made as an arcade port should be. The original’s gameplay stands strong and you’re not bogged down in controls that try too hard to cater to the older joystick style (though if you really want to, you can actually change the control scheme to do just that).

The game’s presentation is by no means top of the line, but they capture the experience of Raiden well and, let’s face it, an old arcade game’s graphics and sound won’t be able to ever compete with the Infinity Blades out there. 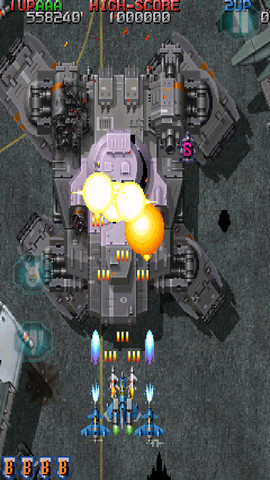 The game does enough to keep you engaged with it’s sound design and the art style almost two decades old manages to show its agelessness. You can tell the game isn’t from today, but it still looks good. Unlike some other rushed ports, the load times here are kept short, ensuring you’re never far away from the next round of play. All in all, the audio and visual components of Raiden Legacy form a robust package that’s nothing to scoff at.

Raiden Legacy is no cheap nostalgia cash-in. It’s an expansive collection of past Raiden titles, brought to the iOS platforms in a manner that can be enjoyed by both the older generation and a whole new round of gamers. It’s not often that I finish reviewing an iOS game and proceed to keep it on my phone, but Raiden Legacy has now got itself a permanent perch on the corner of my iPhone where I put my games.