Overview
The shoot em up genre is one that has made itself quite at home on mobile devices and it is about damn time the legendary R-Type series made its way aboard the iOS platform. R-Type is notorious for being one of the pioneers of the shoot em up genre and has quite the reputation for its incredible difficulty. In the process of transitioning R-Type to the iOS, I am happy to say that none of what made the original R-Type great has been lost in translation. It is still as challenging, still as addictive and most of all still as fun. 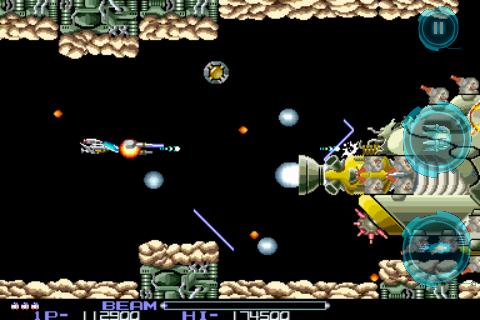 Gameplay
R-Type is a game that really personifies the notion of simple is better. It is a fairly straight forward shoot em up game, with a simple control scheme that takes all of 3 seconds to completely grasp. Moving your finger on the touch screen will move your ship, you automatically shoot and are simply tasked with maneuvering the dangerous outer space battlefield that becomes the backdrop of the action in R-Type.

Some may be concerned that playing the original R-Type is a requirement to play this game, but that couldn’t be further from the truth. R-Type for the iOS is as accessible as these games come. It is easy to learn but difficult to master, the sign of a brilliant game to say the very least.

The difficulty of R-Type is definitely a point of contention however as it may be more of a deterrent to casual gamers looking for simple rewarding fun. This is not a rewarding game, it is a punishing game. The levels are well crafted and grow increasingly difficult the further you progress. In that respect its absolutely faithful to the original game which is renowned for its intense challenge. Needless to say, if a breakneck difficulty is not on your agenda, R-Type may not be your cup of tea. But if you are in the mood for a bit of challenge, look no further than R-Type. 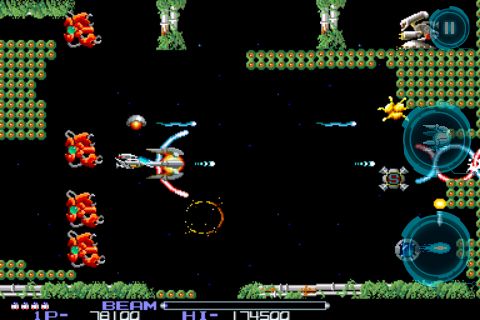 Visuals and Audio
Aesthetically R-Type for the iOS is very faithful the original game. It features 2D sprites and gives off a decidedly old-school feel that will either draw you in or deter you depending upon your persuasion. It is a nice nostalgic trip down memory lane for shoot em up fans of old, and a nice visual experience for those willing to give something old-school a fair go.

The game also features an inspired soundtrack, the likes of which elevate the game to greater heights, showcasing that a brilliant soundtrack adds so much to a gaming experience. R-Type features a soundtrack that will infect your brain and set up camp in your mind’s eye, playing on repeat as it gets stuck in your head. It is an undoubtedly addictive assortment of music. 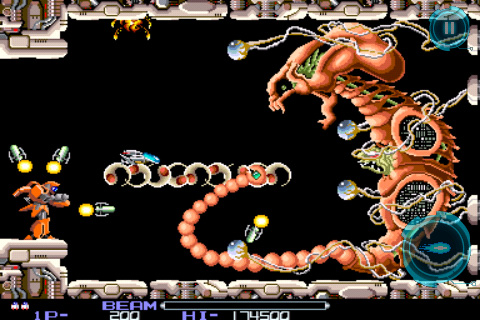 Overall
If you are looking for a nice retro experience on the iOS, R-Type will give you more than enough of your daily retro intake, mixing casual fun with intense hardcore difficulty unlike any game on the iOS platform. The shoot em up genre is something that you either love it or you hate it, the same can be said about R-Type, it is a game that isn’t for everyone, but it is a damn fine game for those who are into its brand of intense fun. R-Type is a great trip down memory lane for those who remember it and ultimately it is a nice gateway game for those wanting to get into shoot em ups.