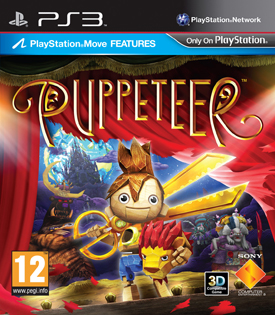 Puppeteer tells the story of a little boy who’s head was eaten by a giant Moon Bear King. Although it sounds brutal, this is definitely a game anyone can enjoy. The game is told through a puppet show, with you controlling a marionette puppet Kutaro. Its clever gameplay mechanics, combined with outstanding visual and audio presentation make for a game that it is as fun to watch as it is to play. While people of all ages will be able to enjoy Puppeteer, it does suffer from some slight issues; namely long cut scenes and a lack of overall difficulty for the most part. However, these issues are minor in the grand scheme of things. 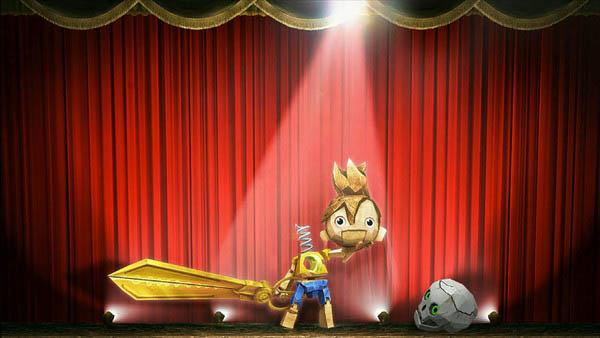 Puppeteer tells the story of a little wooden doll, Kutaro who has lost his head (literally). In order to keep going, he is tasked with finding additional heads, each which bestow him special abilities. In his quest for heads, he finds himself going toe to toe with the terrifying Moon Bear King, and a wealth of other monsters and colourful characters.

The Moon Bear King steals the souls of children in the dead of night and turns them into the puppet guards of his castle. Kutaro is one of the children, and during his capture his head was ripped off and eaten while the rest of his body remains. The story sounds dark and gruesome however the game is fairly light hearted and definitely suitable for all ages. 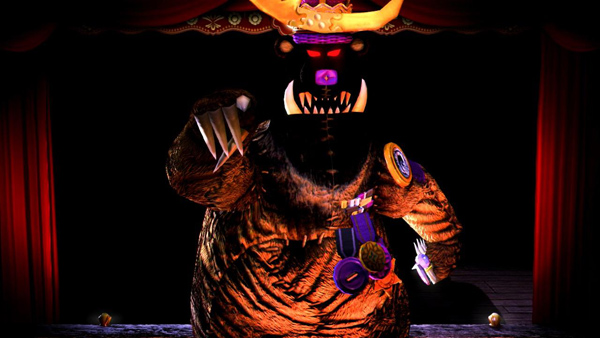 Puppeteer plays out like a stage performance, with marionette puppets filling in the roles of the characters. It is a unique approach, but one that definitely works. Through audience interaction and emotional outbursts, and the way the characters and enemies move, you will believe you really are watching a puppet show at your local theater.

The game is riddled with cut scenes that help push the story along, and they are all fantastic. Top notch voice acting and animations really bring these cut scenes to life and immerse you in its story. Unfortunately, it is a common occurrence for these cut scenes to go on too long, noticeably breaking the gameplay up. 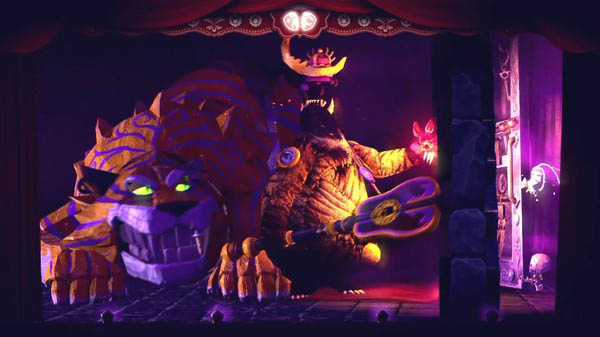 Puppeteer is by and large a platformer. You will rush across 2.5D levels, solving puzzles, battling enemies and finding more heads. Each of the heads you will find along your journey will have their own unique characteristics, and bestow your little puppet with unique powers. Getting damaged forces your head to come flying off, giving you only a short amount of time to pick it up before it becomes unusable. Part of the game’s draw is to collect the staggering amount of heads for your character (ranging from a Skull through to a Hamburger, and everything in between).

The early stages of the game are pretty standard-fare for a platformer, which has you running and jumping over obstacles while battling enemies and solving some small puzzles. However, the game really shifts into gear when you unlock the Calibrus, a giant pair of scissors. The Calibrus are used in combat, and also as am eans of traversing the large levels that Puppeteer offers. “Cutting” is a unique mechanic that allows you to cut objects like paper, wood, grass and even water (i know, i know) to progress through. By continually cutting objects, you will immerse yourself in a sort of flight-mode that keeps you going as long as there is stuff to cut. 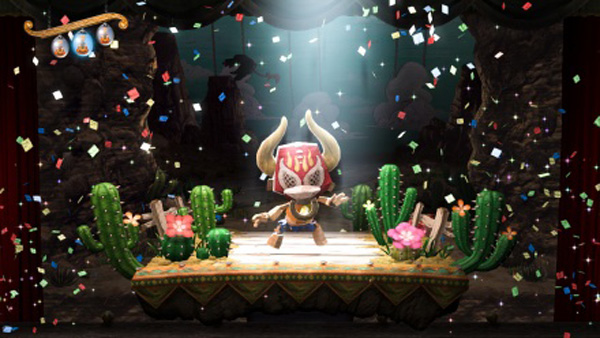 There are a handful of enemy types in Puppeteer, and each one of them acts differently and requires different tricks and skills to beat. It is a little sad that there are so few enemy types, as additional variety would have really spiced up the game. While there are such a limited variety of enemies, the bosses are completely different. Each boss looks and feels completely different from anything else in the game.

While the boss fights are some of the more difficult areas of the game, the game itself isn’t too much of a challenge. There are no areas where I felt the game was unfair or cheap, and in many cases I felt like the game was maybe a little too easy. You are given plenty of time to retrieve your head before it disappears and the puzzles although fun, are not intense brain teasers. This works highly in Puppeteer’s favour though, as this is a game made for all ages, and unlike most family-oriented games, this one really will be fun for everyone. 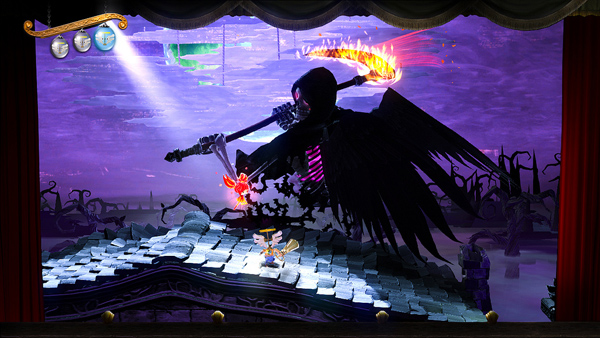 The visuals here in Puppeteer are simply outstanding. Everything looks like it was carved roughly from a piece of wood, or sewn together from fabric. It really brings the puppet-show vibe to life, and seeing the characters and monsters on stage is a marvel to behold.

Screenshots for this game don’t do it justice, as a lot of the magic comes from the way characters and areas move. Kutaro looks and acts like a marionette puppet would, bobbing and staggering as he moves, yet it is all so fluid and impressive. For those who have been to professional puppet shows in the past, you will know exactly what I’m talking about – it looks that good.

The game has an interesting way of adjusting between stages too, with many of the backdrops and foreground being removed from the scene and replaced in front of your eyes. This adds to the live performance feel, and seeing the stage change in front of you is almost as enjoying as watching the characters move around. From a technical standpoint these animations couldn’t have been easy, but the time and care that has been put into them is really noticeable and really appreciated.

You 3d-TV owners out there are in for a real treat with Puppeteer, as it offers stereoscopic 3d. Not only does it offer 3D, but it absolutely nails it. The visual style and manner of things popping out of the screen at players makes for an incredible viewing experience and really adds to the feel of a puppet show that the game presents. 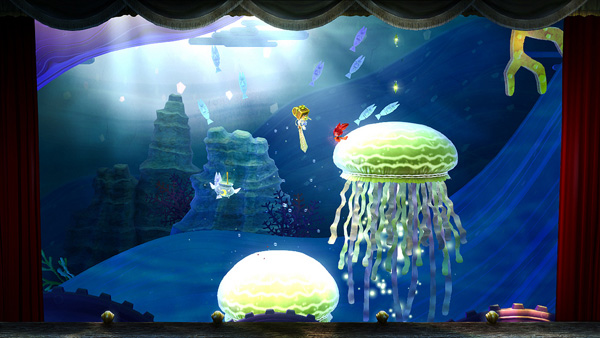 A lot of Puppeteer’s charm and character can be link to its audio. From the music that greets you as you enter the game, through to the extremely impressive voice acting, everything is just so well composed and honestly the game just wouldn’t be the same without it. The music is the first thing that will catch your attention. It is beautifully composed and accurately sets the tone for the story and for the stages as you play the game. This, coupled with some incredible voice acting and masterful sound effects really combine to bring the world alive.

The music and voice acting is great, but what really captures the spirit of the game is the ‘audience’ members. As you perform certain actions, the audience will react accordingly. Cheering, laughing, gasping and many other emotions are all inserted into the game, giving it the lifelike and interactive atmosphere. 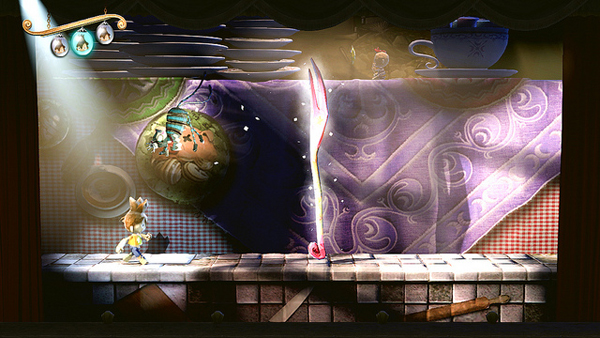 Puppeteer is one of those rare examples in media which proves that games aimed at children can also be enjoyed by teens and even adults. It is masterfully crafted, and a joy to play. Although it seems a bit easy at times, and often the cut scenes will drag on for far too long, the clever cutting mechanic, great platforming and reliance on puzzle solving over straight up combat more than make up for it. The beautiful design and visuals, as well as the audio really bring the game to life, and if you were stuck watching someone play Puppeteer instead of being able to do so yourself, then you will get just as much enjoyment out of it.