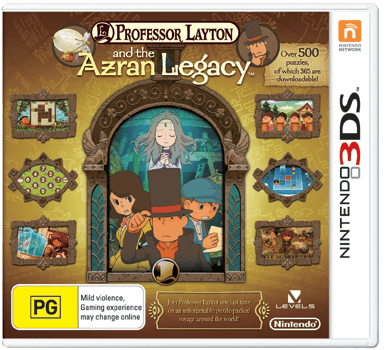 Professor Layton and the Azran Legacy is the final entry in the second official trilogy of Professor Layton titles from Level-5. Although this may be our opportunity to “join Professor Layton one last time on an unforgettable puzzle packed voyage around the world”,  it won’t be goodbye for the beloved character as Professor Layton vs Phoenix Wright: Ace Attorney has been announced for the Nintendo 3DS, coming in 2014. Nevertheless, the developers aimed to go out with a bang and make this game the most enthralling, mind-bending one yet. Did they succeed? It depends on your perspective. Read on for that of a newbie’s.

This, the concluding prequel tale of the franchise, opens with the good Professor Layton receiving a rather fascinating letter from fellow archaeologist Professor Sycamore. No, not the Professor Sycamore from Pokemon X and Y… although that would be an interesting crossover… is Sycamore a popular name in Japan? Strange. Anyway, the letter intrigued the team because he spoke of finding a “living mummy”. Such an unbelievable claim could not be ignored, so Layton takes his apprentices Luke and Emmy to visit Sycamore aboard his airship, the Bostonius. The trip takes them to snowy Froenborg where, along the way to meeting Sycamore, they observe some unidentified and suspicious looking thugs. This definitely isn’t a good sign. 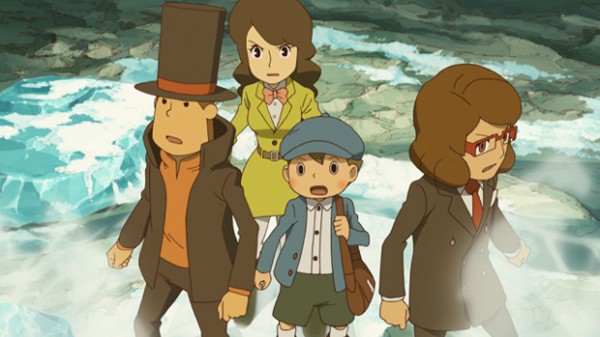 Proceeding towards a frozen-over cave after eavesdropping information from the brutes, the team find a way in to greet an awaiting Sycamore. He is stood staring at what appears to be a girl frozen in a huge wall of ice. Upon thawing her out with his classic observational skills and ingenuity, she awakens but is promptly abducted by the aforementioned thugs and their mysterious leader, armed with semi-automatics. The team give chase, pursuing their massive battleship throughout the land before finally boarding and rescuing the girl… unfortunately, the escape didn’t go so smoothly and the crew crash lands in a forest near “Siren Lake”, the video game world’s Bermuda Triangle for its high number of reported aircraft crashes.

Here, Layton and his associates venture to find her after landing in separate locations, and discover many things, such as the name of the organisation the thugs work for, who seek to unlock the powers of the long lost Azran race. A particular revelation leads them on a further quest to find five “Aura Stones” that are the key to unlocking the Azran Legacy. The game is very narrative-focused with few significant distractions from the main plot. It develops without giving away too much to the player, and there are some satisfying twists and turns to be experienced. There are also little video ‘Episodes’ that you unlock over the course of your journey that offer insight into the lives of those you meet during the investigation. They are completely supplementary and not necessary to understand the story at large.

Professor Layton games are quite simple to navigate and play. Regardless, Aldus – a familiar face – makes an appearance at the start to get the player (re-)introduced with the controls. Tapping the magnifying glass at the top right of the bottom screen enters ‘Investigation Mode’, whereby you can slide the stylus around the screen to observe the environment. When a point of interest is encountered, the glass turns orange, indicating that you may tap on the screen to then interact with it. Similarly, when an object can be zoomed in on, the glass turns blue and all you have to do is, again, tap the screen to engage it. 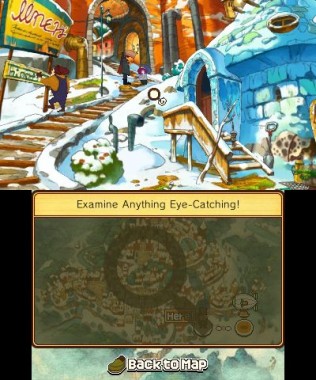 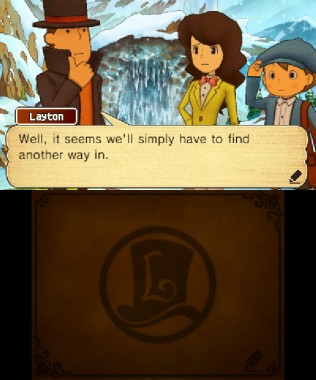 Tapping “Zoom Out” at the very bottom of the play screen goes back to the main view. Once back here, the prompt will change to “Back to Map”. Tapping this brings up the map view of your immediate vicinity. Also indicated is the number of puzzles solved so far, how many people are in your current party, your main objective, the name of your location and where you can travel to. Other than Investigation Mode, Layton’s ‘trunk’ can also be accessed, which acts as an inventory or main menu of sorts. Inside it, you will find the in-game volume control, save game functionality, your ever increasing collection of knick-knacks and much more as detailed below.

Said collectibles, or knick-knacks, are found by scouring the environment and tapping the screen when you notice a “poof” visual effect, as Aldus puts it, around your magnifying glass. ‘Memo’ allows you to make notes, which is handy considering the difficulty of some puzzles. ‘Treasure Hunt’ is the Streetpass feature and enables you to accept or create challenges that require you find specified objects in the world. Completing these earns you reward points which can then be spent on rewards such as more knick-knacks or hint coins (which we’ll get to in a shortly). Layton’s Journal keeps track of the events that have taken place so far in the story. 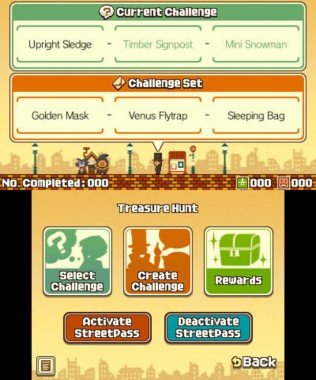 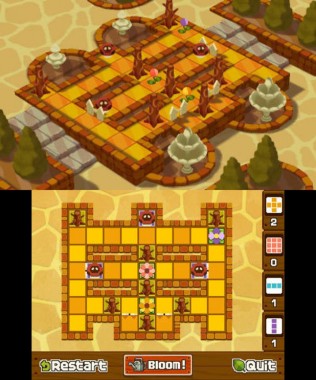 ‘Mysteries’ catalogues all the, you guessed it, mysteries you come across in your travels and are updated as more details are uncovered. While in the trunk view, the top screen displays your stats, including total score, hint coins in possession and time played. Three mini-games are included: ‘Dress Up’, a game that asks you to pick out an outfit for an individual you’ve met based on their specifications, Nut Roller and Blooms & Shrooms, the latter of which sees you planting flowers that have different radiuses of effect, hopefully causing a chain reaction that helps all the trees on a level grow. To round out the noteworthy inclusions is an eventual unlock of Layton’s daily newspaper, which houses side-puzzles that can be taken on by revisiting the respective locations listed in the stories.

The aforementioned hint coins can be plucked from their hiding places in the environment and then utilised to aid you when stuck on a particularly tough puzzle. Picarats return as the score value and are given for finishing each of the 135-odd puzzles (with 365 more daily puzzles available to download). Earn enough and you may unlock exclusive materials and bonus features in the ‘Top Secret’ sub-menu. And fulfilling specific conditions relating to Professor Layton and the Miracle Mask will open The Hidden Door of the Azran, holding special content inside. Something that is new and unique to this title is the non-linearity of the middle section of the game. Multiple paths beckon you as you gain flight control of the Bostonius, allowing you to explore secondary mysteries of your choice. It’s always good to have variety, especially so deep into a franchise. 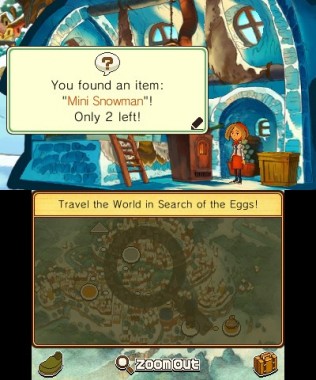 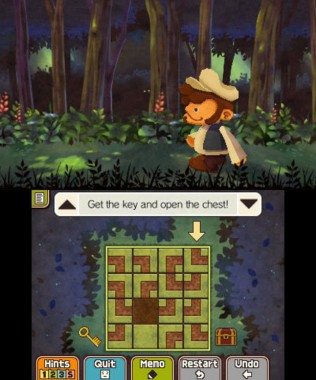 Finally, let’s talk about the puzzles! Those familiar with the franchise may breeze through many, having already acquainted themselves with literally thousands like them before Professor Layton and the Azran Legacy. For others, like myself, they should pose an appropriately brain-taxing test. Early on I learned the hard way the exact extent of these logic puzzles: basically, you’re asked to calculate how many cups of hot water would be needed to melt this block of ice, but the answer is zero… just put it next to a fire! WHAT?! I wasted hint coins on this after my logical numerical input wasn’t accepted. Otherwise, puzzle types range from picture recreations, route finding, arrangements, slide puzzles (remember those?), sequencing, mathematical calculations and more. There’s a substantial spectrum of diverse puzzles, and with such singularity among them, there’s bound to be individual puzzles or a type of puzzle that may confound you, or at the very least, not be in your wheelhouse.

The painterly visuals of the Professor Layton series never lose their charm. The European clean-line-esque art style, along with the warm colour palette, perfectly captures and illustrates the world within. Animated cutscenes, on the other hand, continue to relay a certain quality reminiscent of Studio Ghibli’s numerous works. The 3D effect of the Nintendo 3DS is especially effective because of an extra layer in the effect inherent to the gameplay type. As you slide your stylus around, the represented magnifying glass moves across objects on screen, going between foreground and background. It’s a nice touch that creates a great, natural sense of physical space and depth. 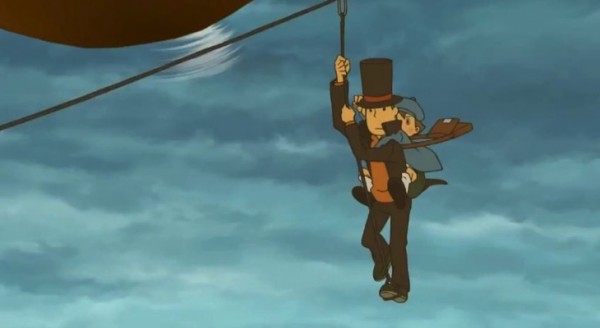 The music of the game is also extremely well-fitting, with a beautiful piano melody acting as the backbone for the main themes. Slower, legato wind and string instrumentation accompanies the piano, resulting in a quaint, Victorian sound; antiquated and with an air of sophistication, much like Hershel Layton himself. Speaking of, the voice acting here is well done all around, although it’s not without the usual exaggerations. I just wish Professor Layton had more to say than frustrating truisms. Professor Obvious and his Platitudinal Legacy might be a better title for the game, with almost every second sentence coming out of his mouth being a damn platitude!

As someone who had never played a Professor Layton title previously, I think the game on a whole made a substantially fresh impression on me, while for those long-time fans, the puzzles may seem more derivative in nature, which is completely understandable, and expected. That being said, the sheer amount of content outside of the main path has to be appreciated by all. Level-5 have always maintained this endearing, signature charm that comes with their Studio Ghibli inspired animation (a love that led them to actually collaborate on Ni no Kuni) and European, clean art-style. Add to all that an intriguing story and a more non-linear approach, and I’d say this is a great send-off for the gentlemanly hero. 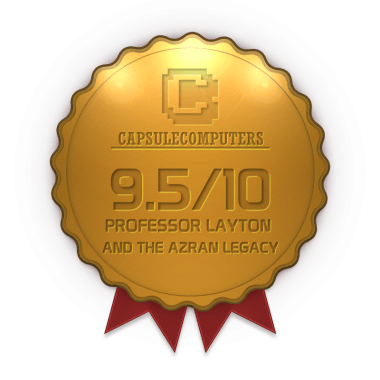