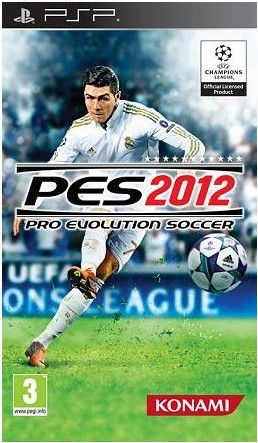 Overview
Pro Evolution Soccer has always been the closest rival to the juggernaut football series that is known as the FIFA series, published by Electronic Arts. Of course, it does have its on following, a strong one at that. This year, Pro Evolution Soccer 2012 offers something for those wanting the portable version so that they may play on the go. I wouldn’t call it a stripped down port, though, as it does have a life of its own using the staples of the series. Excellent game modes and decent gameplay shine from the mediocre visuals and poor track selection, save a fair few. So, how does it shape up? 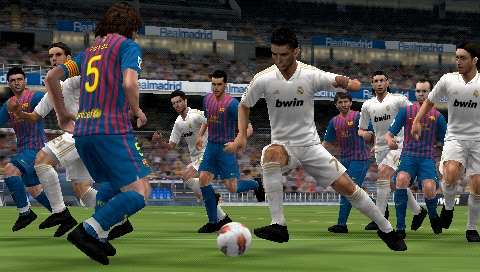 Gameplay
In recent years, Konami has been trying to deliver an in-depth experience for Pro Evolution fans. In this game, there are tactical actions the player can take that are used in real life, like a focus on counter attacking or focusing the attack down one wing. Although there is depth within the game, it becomes a chore to activate that depth. Take shooting for example. More often than not, I only relied on pressing circle (it’s initially square, but from being exposed to FIFA for so long, I decided to change the controls). That becomes a problem because, since the power bar becomes a bit unforgiving, the shot would be executed with too much power. It isn’t satisfying to see the shot go wide or high. At the end of the day, it becomes a skeleton of a game in terms of gameplay, but it can still be satisfying. What does make a great game are the player’s team mates and the opposition. The AI is near perfect as the players act out their roles on the pitch. If the player takes too long, they will be shut down. The better, more top rated players will show why they are the best of the best. Team members will always help the player in both attack and defense. Along with the challenge it imposes (dependent on the difficulty level), the AI will always be fair and realistic.

There is one thing about the gameplay I am happy about, it is the plethora of game modes that are available for the player to go through. First off, I shall talk about the gem of the modes: the UEFA Champions League. For those who don’t follow the round ball game, the UEFA Champions League is the premium club competition of Europe, showcasing the best of the best from the top leagues of the continent. Konami snapped up the official license of the tournament and they did not waste it. Not only the tournament is in a separate mode, it has been incorporated into the Master League and Be A Legend. The tournament is exactly what the official tournament is and does incorporate most of the teams of the 2011-12 tournament (except three of the English clubs). However, the PSP version does not include the UEFA Europa League, the secondary UEFA club competition.

The UEFA Champions League isn’t the only club competition that is included in Pro Evolution Soccer 2012. Also included is the Copa Santander Libertadores, South America’s premium club competition. Unlike the Champions League, the Copa Santander Libertadores lacks a presence in any other game modes other than the tournament. All of the teams for the more current season are there, but they suffer a problem. They do not appear outside of the game mode. So, for example, one can not pit Flamengio of Brazil against Manchester United. If the teams of the Champions League can appear in other game modes, why not the Copa teams? 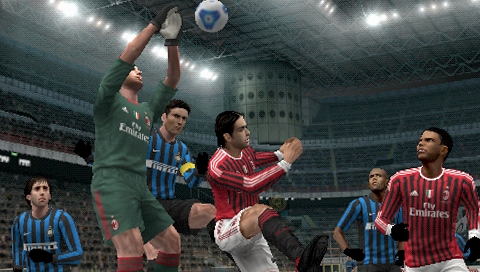 There are other game modes outside of the two club competitions. The more stronger ones have to be Master League and Be A Legend. In Master League, the player takes control of a club (existing or created) and tries to take them to the top. It is similar to the manager aspect of FIFA’s Career Mode where, as manager, the player will scout players, be active in the transfer market and tweak the team to their liking so that they may reach the top of the mountain, acclimating to a Champions League tournament win, as the player will choose which of the five European leagues they will try to conquer. It is a great game mode as, although not in depth as a manager simulator, still offers the basics of becoming a manager, still allowing that experience.

Be A Legend becomes more personal as it focuses on one player, usually a created player. Here, it is the player’s goal to reach the top of professional football, becoming the world’s best player. In this mode, the player can sign for different clubs, take on a mentor to boost stats and turn it around on the pitch. Even though it is personal, it still is restrictive as the player is in the shoes of a footballer, thus having no real power. Having said that, the fact that you can be substituted, unlike FIFA’s Career Mode, is definitely a plus.

There are others modes, like League and Cup modes, where the player controls one team and just goes through one league or cup competition without the hassles of the Master League mode and Training mode, which is self explanatory. An Edit mode also appears, which allows team changes, create a footballer, changing the name of the stadium and even changing the name of a competition. Overall, there is a bit of depth in the gameplay, but it seems it isn’t there due to the fact this is a scaled down port of the console versions. The plethora of game modes is definitely a positive and their use, especially the Champions League, is very well done. Master League and Be A Legend are also worth checking out. 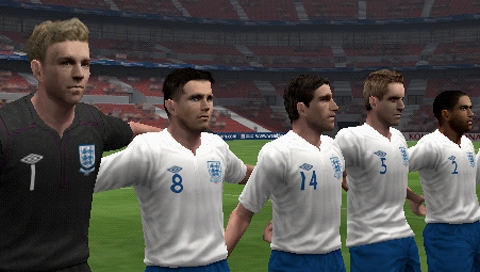 Visual/Audio
Considering that the PSP isn’t the most powerful machine out there, one shouldn’t expect eye-popping visuals. Actually they look very mediocre. The players are a far cry from their actual appearances (save for a few of the bigger stars of the game). The stadiums look good though, especially during the Champions League games, where they get the look and feel of a Champions League game right. Animations don’t look natural. In fact, they are quite robotic, especially when shots are taken. What would be interesting to note is that the game does allow the player to choose what animations they would like with any player, both real and created.

Don’t get me started on the music. Alright, some of the tracks are fine, mostly the more instrumental ones, but some of them are downright awful. The different mixes of the Champions League are also great, all evoking the meaning of the tournament, which is the best of the best all trying to get the most prestigious prize on the club scene. Thankfully, there is a playlist, where one can shut the music off if it is not what they enjoy. One can select what game modes and instances during the game they would like to hear the music. There is also an option to load their own tracks from the Memory Stick onto the playlist. The commentary on this version of the game doesn’t flow. It feels like a broken record, skipping beats within the game. It sounds disjointed and it doesn’t give the play justice. 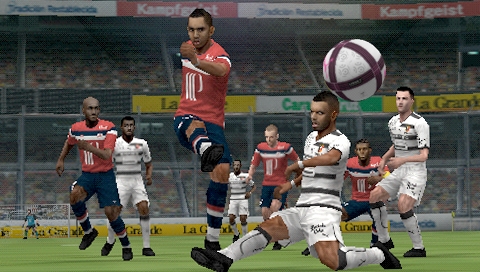 Overall
Pro Evolution Soccer 2012 is a great football title on the go. Expect a fair and realistic AI and a great depth in gameplay, somewhat restrictive due to the controls of the PSP. Also expect a plethora of game modes, with the Champions League, Master League and Be A Legend the cream of the crop, despite lacking a few of the modes of the console version. Although it has somewhat mediocre visuals and a poor selection of music, Pro Evolution Soccer 2012 should be in one’s PSP collection, even if said person plans to buy the console version.