Over the years, Chillingo have been the top dog of the mobile market, publishing some of the most successful games on the platform. Chillingo are now headed to the hive with Pollen Count, a game where the player must control bees and safely lead them to their destination while collecting pollen from flowers. We have seen similar titles released in the past with this formula, but Pollen Count offers a bit more chaos to add in an extra challenge for the player. How does this bee directing game live up to Chillingo’s heavy hitters of the past? Here is my review for Pollen Count for the iPhone. 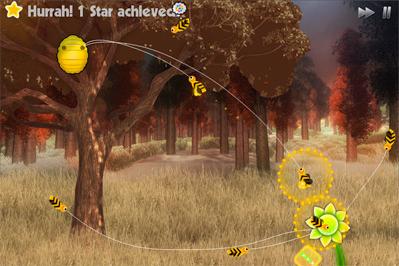 Gameplay
Picture yourself in a scenic field, with the grass blowing back and forth. A small bee who lacks map skills then flies into the picture, on a mission to gather pollen for his hive. That is the main concept of Pollen Count, as you now must trace this bee a path to travel which will take him to a flower. After he has filled his load, you then must trace a line to direct him to a hive at the top of the screen. Sound overly simple? That is where you would be wrong as there is a ton of strategy involved that can lead to both glee and sheer frustration.

As you progress in a level, more bees enter the picture, where you then must direct them to different flowers by tracing each an individual path. If two bees happen to collide on their journey, the game quickly ends and the player must restart the game. Due to the scarce amount of flowers, the player must constantly make sure each bee is quickly escorted to the nearest hive or bee house to keep up with the pace of the randoms that fly in. The more bees that are safely escorted, the more stars that are awarded at the end of each level.

This formula is used throughout the game, but new gameplay techniques are added throughout to mix it up a bit. Some bees will only land on certain flowers, which means the player must keep that in mind while directing traffic. Other bees are much faster and require quick action to get them to their appropriate destination. I found things in a short time to get quite chaotic, but if the traffic control of our insect friends isn’t enough for you, obstacles soon enter the picture to up the challenge even more. 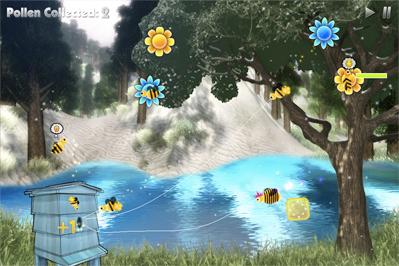 Spiders that rob your swarm of pollen, zombees that infect bees at a touch, and even hungry birds start to come into the picture just a few levels in, which is where the difficulty curve takes a turn into the tedious. I admit that Pollen Count has some addictive and rather simple gameplay for the most part, but having around 15-20 bees on the screen that can all kill eachother at a touch mixed with these extra dangers can lead to the whole game feeling cluttered and frustrating. It’s not like these tasks are impossible, but I just found all of these events happening at once to be a bit too much for the iPhone’s smaller screen.

Those who are competitive are in luck however, as an online leaderboard has been added in so players can try to aim to tackle a high score. Other modes can also be unlocked which involve a 3D racing experience of sorts and a survival mode that boasts a ton of “zombees” that are out to infect. While both modes are rather small, each offer a nice incentive to progress throughout the 22 levels within the main game.

Graphics/Audio
The finest feature of Pollen Count are the beautiful and realistic backdrops that can be seen within each level. As all of the action is happening with your cartoon bees in the foreground, this peaceful and fully animated atmosphere remains a visual delight with several different locations displayed throughout the game. I also must say I didn’t notice any slowdown or framerate problems whatsoever, and with all the chaos that can ensue at once, it was a pleasant surprise to see Pollen Count never miss a beat with it’s animation-heavy gameplay style. 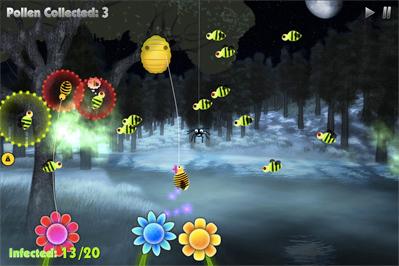 The music is also a top notch production within this game as well, as each melody perfectly blends with the backdrop to give off a relaxing feel, which makes this casual title stand miles above many of it’s contenders in the market on presentation value alone. There is a lot of buzzing in the game which can be nerve-wrecking during hectic situations, but considering this title revolves around bees, most shouldn’t mind this given the concept of the game.

Overall
Pollen Count has an addictive traffic-directing formula with a solid gameplay engine in tow that can lead to hours of fun. While I enjoyed the overall experience, I can say that it felt that Pollen Count’s casual appearance is just that of looks alone and the sudden difficulty curve after just a handful of levels is sure to scare off those who are looking for a more pick-up-and-play title. Either way, with a unique layer of strategy buried within and a stunning presentation, Pollen Count is sure to serve anyone well who are looking for a unique and chaotic challenge where the rewards are as sweet as honey.

I Give Pollen Count for the iPhone: