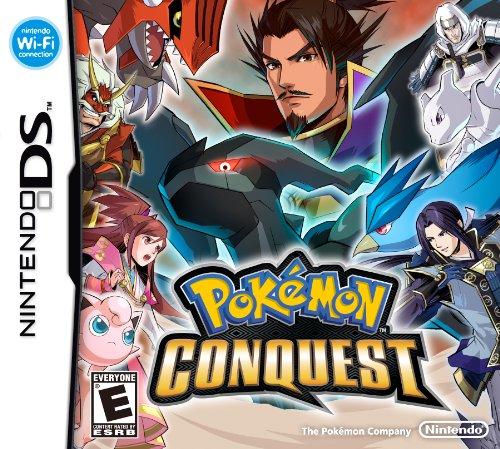 Overview
Pokemon has grown a lot as a franchise during the past decade, branching out into other genres successfully while adding to the lore that is the massive Pokemon Universe.  Nobunaga’s Ambition on the other hand falls into a niche catagory altogether, as the game is a tactical role-playing game, loaded with raw strategic gameplay. What happens when you combine the two brands? Pokemon Conquest is the answer. Developed by Tecmo Koei, this title plays like any other tactical strategy game would, but has a sweet and accessible coat of Pokemon all over it. The question is, is this crossover enough to satisfy both fanbases, or does it miss it’s mark entirely? Here is my review for Pokemon Conquest for the Nintendo DS.

Story
The very first thing Pokemon Conquest does is let you as the player know that it is fact a Pokemon game. After selecting a gender and a name, the player is then however thrown into the region of Ransei. Instead of being a trainer, you are a warlord and must “link” up with a team of other warriors and Pokemon to conquer 17 kingdoms in order to bring peace to the troubled land. 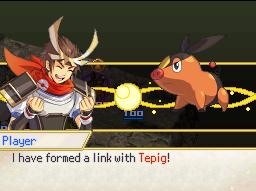 Does this sound like a Pokemon game so far? Well, it’s certainly a new direction for the franchise, but this plot is thick and bursting at the seams with interesting dialogue and characters, making the experience utterly engrossing. Each Warlord encountered has a completely different personality from the next, and the large Pokemon roster and element of choice keeps the plot from ever getting stale, allowing for multiple playthroughs – much like the main games. The themes in the game do feel a bit more adult this time around, but I grew up with Pokemon myself and I feel that many other fans will also welcome in this more grown-up approach to a narrative.

Gameplay
As I mentioned, Pokemon Conquest is a tactical strategy game at it’s core, and a fine one at that. Utilizing an isometric overhead perspective, players do battle on a grid-based field and have to tell their Pokemon where to go and what abilities to use. Once in proper range, your Eevee, Jigglypuff, ect., can go head to head with a foe by performing a technique in a short but sweet battle sequence. Yes, if you have ever played Final Fantasy Tactics or Devil Survivor, you will feel right at home as these mechanics are generally the same. Each Pokemon has an HP bar to deplete, and type advantages and status effects come into full play as well, which broadens the main strategy elements even further. 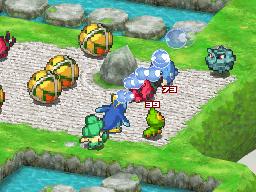 The main point of the game is to of course conquer each Kingdom on the map. To do this, players will have to select that particular area and head straight to the battlefield, where up to six Pokemon can be sent out at once by each side. If an opponent is defeated in a timely or super effective manner, there is usually a choice to recruit that Warlord after the battle. It was a bit surprising at first to see that these Warlords had such a large role in the game, but that is another thing that makes this adventure so deep in comparison to other Pokemon titles. Every Warlord has their own skill that can be applied during a bout, which is usually used for healing or boosting a stat to shift the odds. Recruited allies can also farm for gold back at claimed Kingdoms and train up their linked Pokemon with some good ol’ grinding against other warriors and wild Pokemon – who can also be brought into the mix. 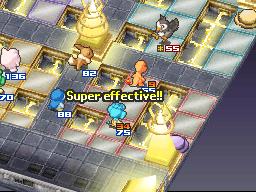 Leveling up your team is also different than the norm. You still will have to find other Pokemon (and Warlords, in Conquest’s case) to do battle with, much like you’d expect. This title however bases growth on the bond between a Warlord and their Pokemon – with a potential bond cap of 100% for each of the 200 species in the game. One thing you will have to remember is that each Pokemon you send out has just one attack. This could be seen as something that limit’s Pokemon Conquest’s complexity, but thankfully these Pokemon Evolve based on their bond with the linked party, where you then will see a much stronger technique used in battle from that point forward. Warlords also grow in this manner, and can learn new abilities to better match their much more powerful partner. 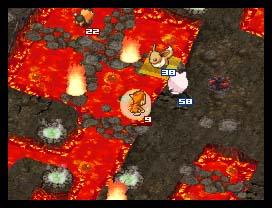 17 Kingdoms make up the main game, and each are vastly different from the next. Yeah, a change of scenery is nice, but it’s even better that the change of location can actually effect the battles for a much greater reason. For example, one of the earlier areas is made up of lava filled pits with geysers blowing constantly. If you happen to have a fire Pokemon on your side, you can easily bypass these dangers and head right to your opponent. Bringing a different type is more of a risk – as you then will have to find a path to the opposing Pokemon without going over the set turn limit for the match-up. Type advantages can be found throughout the game, and knowing how to utilize each Pokemon correctly is the key to pulling off a quick victory, bringing all of Conquest’s offerings full circle and into one well oiled machine. 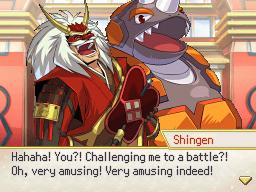 Once a main battle is won and that new area is yours, you can than browse the shops for special items, feed your Pokemon to increase their strength, and continue battling and recruiting wild species specific to that area. There is just as much strategy to this portion of Conquest, too. You see, each Warlord can only perform one action during a “month”, and Conquest gives you the choice to better your squad or to go right off into the next area during each one of these intervals. Preparation is essential to progression however, so if you want a well balanced squad, it’s best to break up a few of your primed teammates to do some training and shopping beforehand. As far as challenge goes, this is definitely one of the simpler titles of the genre by far, but it never lacks in depth and makes up for it’s minor shortcomings in difficulty with a massive amount of personal choice and a constant stream of options.

Visuals and Audio
With such a grand show for both the main plot and gameplay alike, you could honestly be looking at pixels and still be pleased. Pokemon Conquest is a full packaged deal though, and manages to pull off some of the best visuals on the DS to date. Each character model is richly detailed, enabling their intended personalities to come out as they speak. On the Pokemon front, battles also retain this detail, with each Pokemon looking as they should and animating fluently on the field. Environments are also stunning as well, delivering a new atmosphere for each area while breaking up any feelings of monotony with the varied uses of the fauna and obstacles within. Even though this game looks like it is closer to it’s other Ambition kin, it still has that bright and welcoming glow of the Pokemon franchise, which should please anyone who want some peanut butter with their chocolate…if you know what I mean. 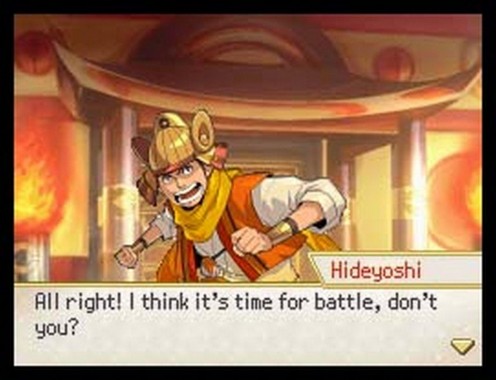 As far as audio goes, expect to hear nothing like any other Pokemon game has delivered thus far, but a soundtrack that still sounds like a Pokemon game. Each track fits perfectly with that feudal Japanese theme, yet stays upbeat and intense to live up to the biggest series in portable gaming. The minor sound effects also come out during battle, as hearing the whisps of a mighty razor leaf or the squirt of a water gun all come across nicely and make attacks equally satisfying to execute. No, there isn’t voice acting, but this is the DS and honestly, voices are just not necessary in this type of game.

Overall
Pokemon Conquest is a bit of a risk on Nintendo’s part as Pokemon titles in general are usually built to suit all and tactical strategy romps are generally a much more niche affair. With that said, this spin-off manages to pull everything together effortlessly and still retain the best features of both franchises it crossed over from. Yes, the battles are never that demanding, but the level of detail and options stitched into the game mesh together well, making for one of the most engrossing and satisfying experiences for the platform as a whole. If you are looking for the next great Pokemon game, look no further as Ransei is a place that should be conquered by all.