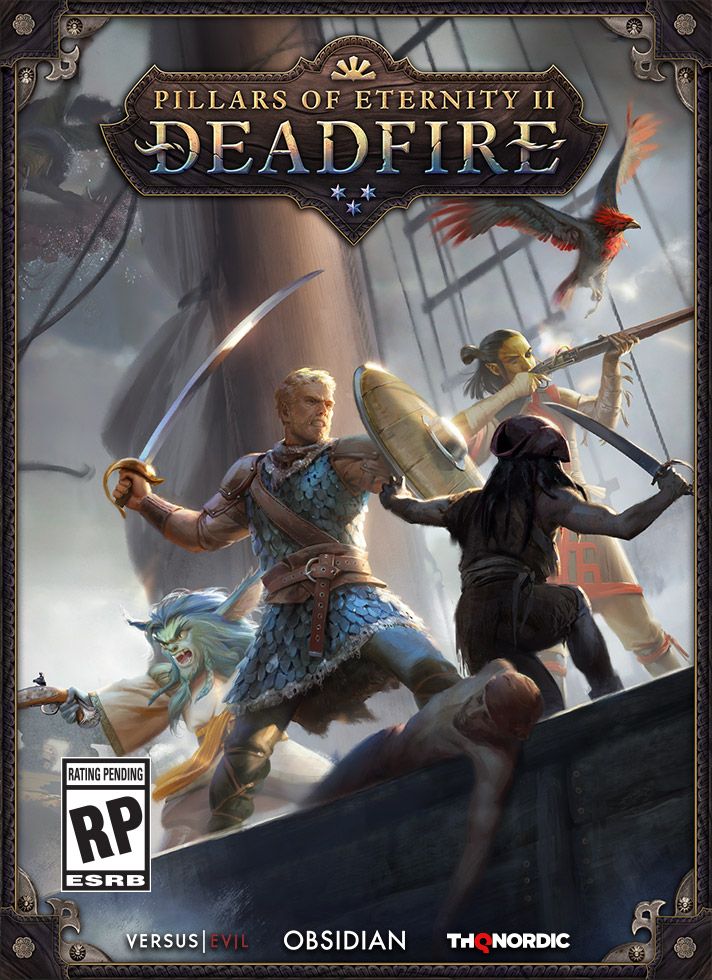 The Watcher of Caed Nua happily sat in their fortress after the events of Pillars of Eternity, enjoying well deserved rest. Unfortunately, peace was just not meant to be. The god Eothas took the form of a massive adra statue and rose, absorbing all the souls in and around the fortress. The Watcher only survives out of sheer strength, managing to hang onto a small piece of their soul. Eothas now marches into Deadfire, leaving death and destruction in his wake. Calling on the Watcher to return a favour, the god Berath has now tasked the Watcher to determine Eothas’ plan and stop him if necessary. 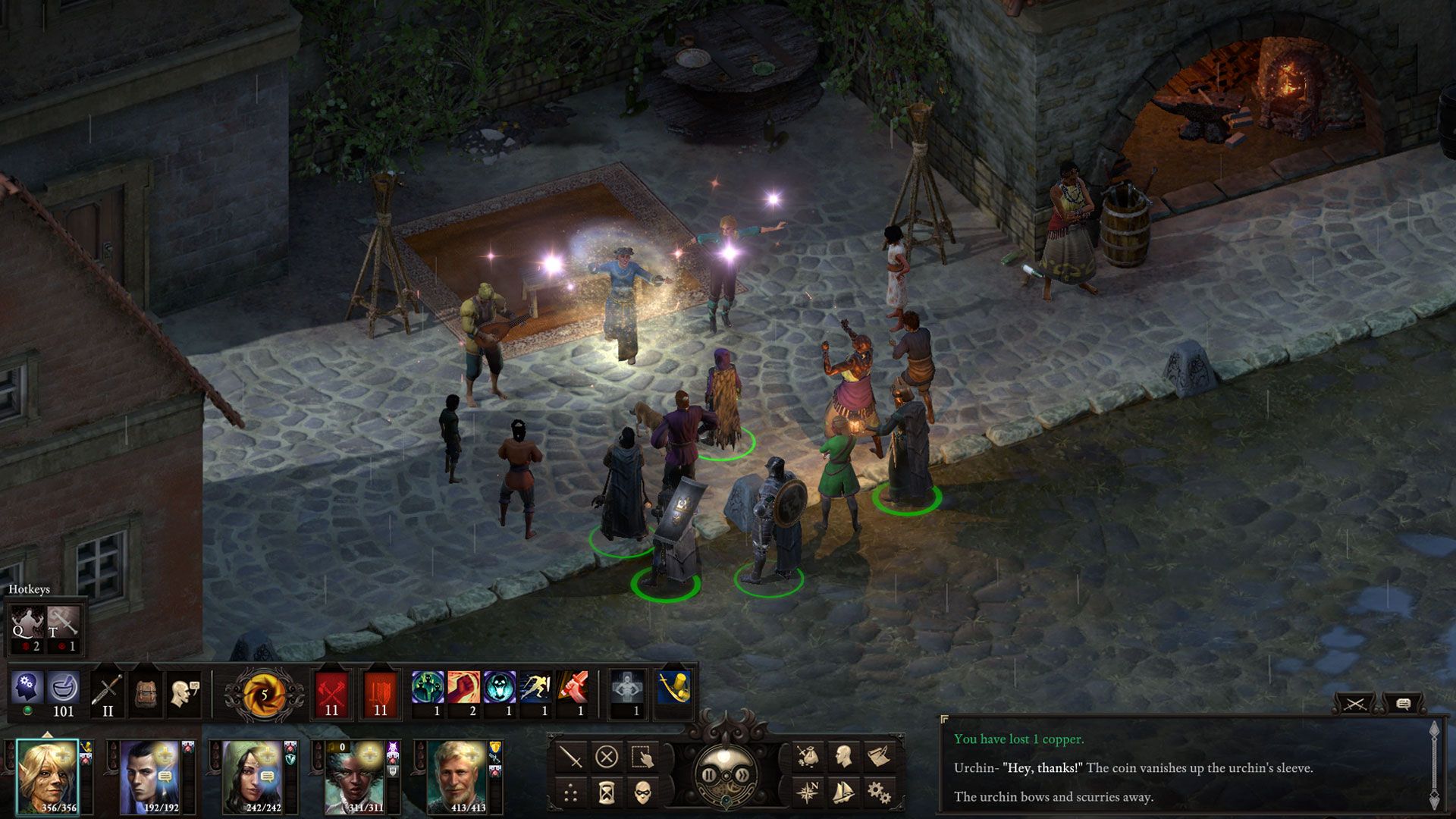 Pillars of Eternity II: Deadfire delivers an excellent story experience. I am struck by how familiar and foreign Deadfire is at the same time. Obsidian has taken the classic fantasy world and reimagines it as if human colonialism occurred there too. I find Obsidian handles the politically charged subject well, preferring to take a more balanced approach that portrays individuals with a large variety of world views and motivations within a system that brings both misery and benefits to the area and its people. I’m rather fond of Obsidian’s approach as it allows for the subject of colonialism to be explored in a more neutral environment of a fantasy world, then allowing gamers to draw their own links to the real world.

Obsidian’s rather nuanced touch is evident throughout the entire game. Few characters are explicitly good or evil. Even the most benevolent actions can come with a hidden cost. Instead of the traditional good and evil dichotomy, players can handle situations from a variety of approaches, ranging from aggressive behaviour to stoic responses. Factions will track not only the player’s actions that affect the faction, but also the player’s general behaviour. NPCs will throw in an odd line or two to acknowledge the player’s reputation as an honest diplomat or a terrifying psychopath.

I have not had the opportunity to play the original Pillars of Eternity, but Obsidian has done a great job getting new players up to speed. For those without a save file from the first game, players are able to choose one of six archetypes that determine the player’s actions from the previous game and their reputation. A handy Pillars of Eternity icon pops up when the conversation refers to events of the first game. Obsidian’s implementation of a lore encyclopedia is possibly one of the best I have ever seen. Important terms and culturally significant individuals are highlighted and will display a tooltip with a short description. It’s a great system for helping players navigate complex lore, and I hope Obsidian expands it to help players keep track of characters they may encounter in their travels. 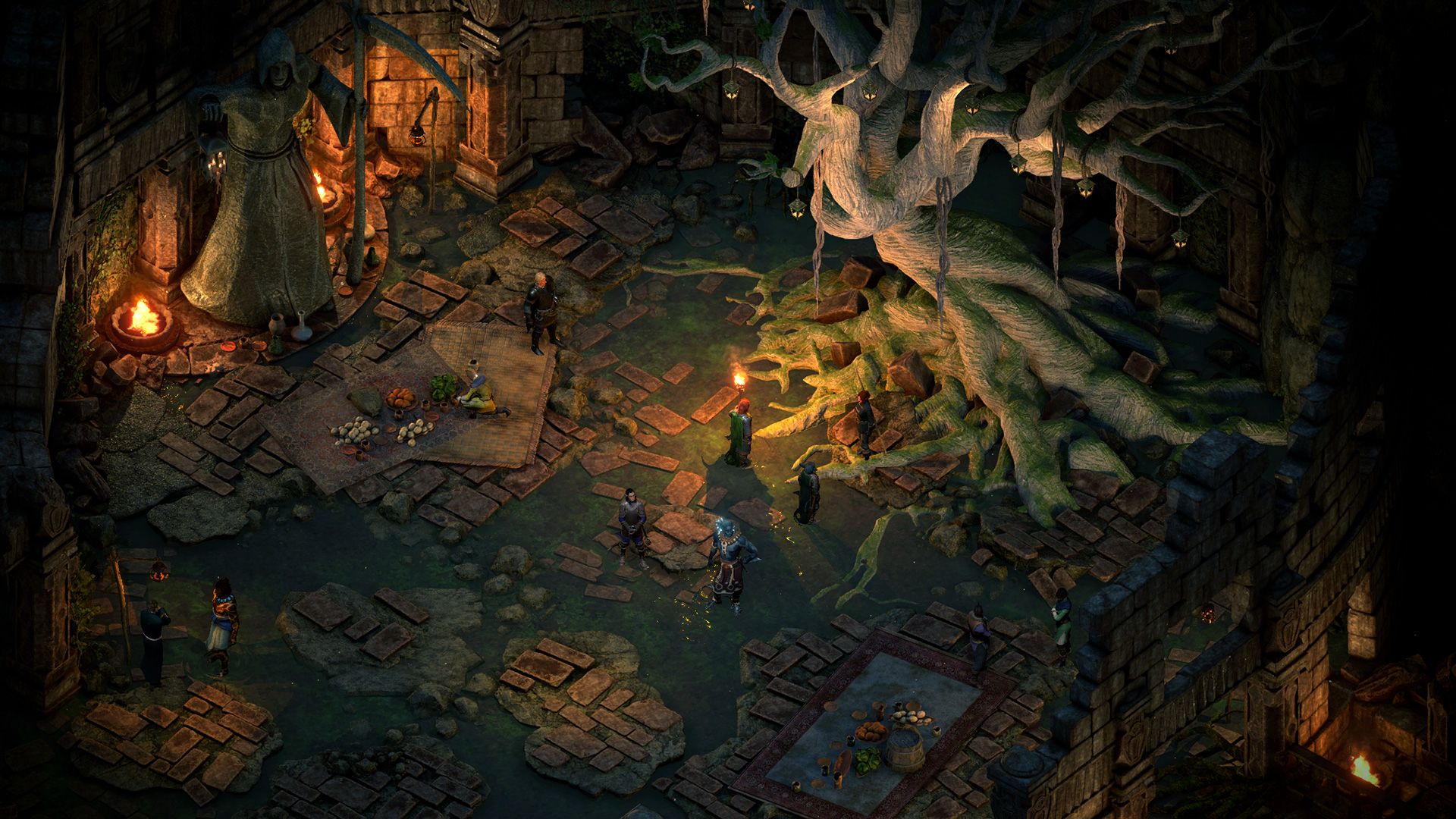 Pillars of Eternity II: Deadfire is modeled after old school isometric RPGs like Baldur’s Gate and Neverwinter Nights. As such, players can expect large, branching quest lines with plenty of side quests, deep character progression, and a good bit of combat. While the core mechanics of Pillars of Eternity has not changed much, Obsidian has opted to tighten the gameplay experience a bit by lowering the party size down to five, introducing spell retargeting, increasing control of AI behaviour, and adding more customization options.

The quests in Pillars of Eternity II: Deadfire are well designed. There is a lot of content to explore and plenty of ways to approach every situation. Obsidian has paid great care to ensure that most problems can be solved without violence, putting many of the game’s social skills to good use. Between the many factions to align with and the multiple solutions to quests, Obsidian has packed in a good amount of replayability into the game.

The character system in Pillars of Eternity II: Deadfire is solid. The system should be familiar to anyone who has played Dungeons & Dragons in one of its many variants. The classes are varied enough to feel different, with a few unique classes thrown in for good measure. Since party sizes has been dropped down to five, character choices should matter a bit more. In practice, I found it was easy enough to create a balanced party, especially with the assistance of multiclass characters, but it wasn’t a completely mindless endeavour either. Many skill checks outside of combat are party based, forcing players to distribute skills across the party so that all skills are accounted for, but still ensuring that each character specialized in a few skills for the odd individual check. 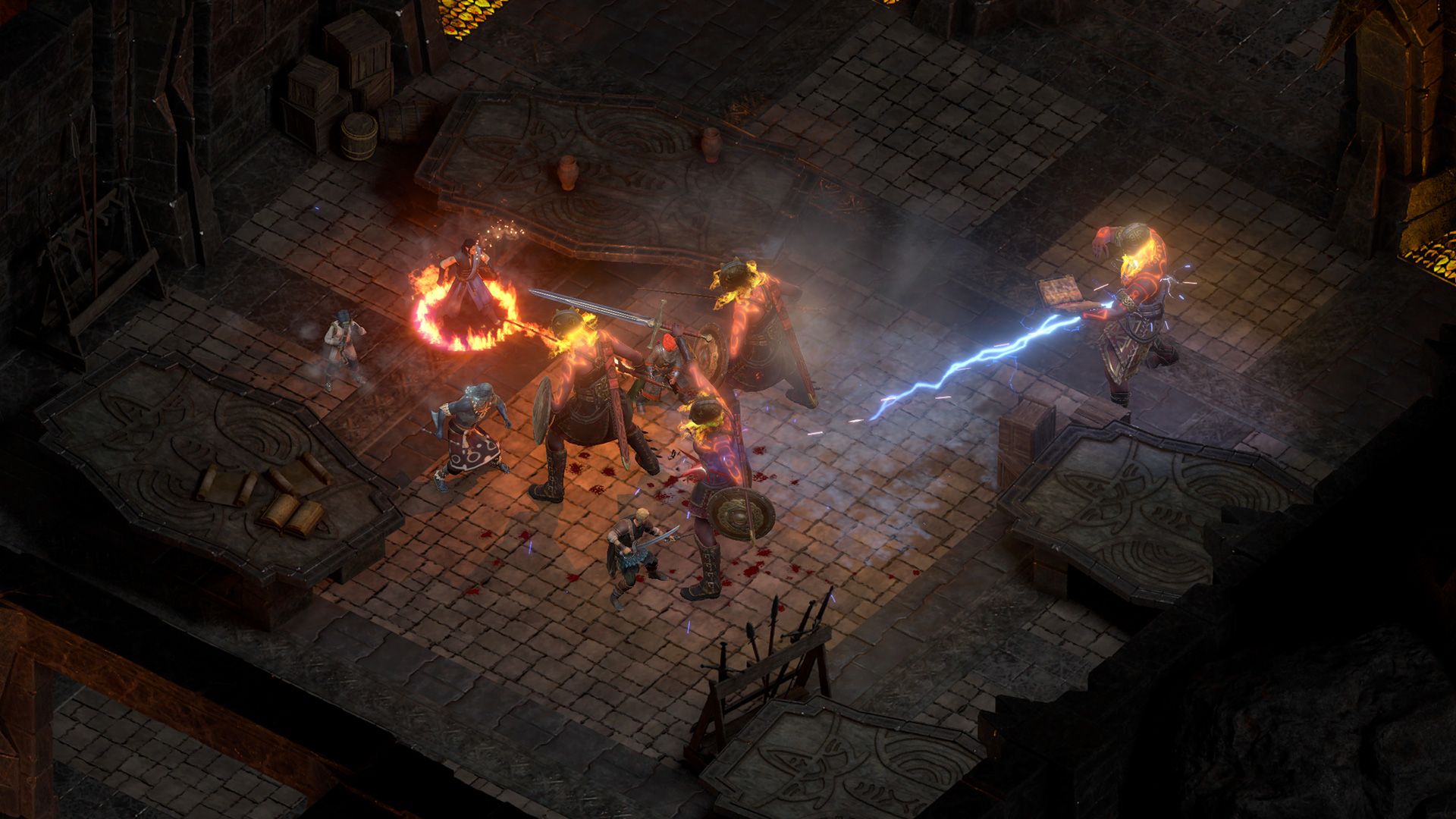 Combat is in real time in Pillars of Eternity II: Deadfire with the option to pause or slow the action to issue specific commands. The AI is very competent in combat, allowing players to generally leave them to their own devices. Skilled players who are willing to manage their characters positioning and skills will still get a tactical advantage, allowing them to tackle more challenging content sooner. The AI’s one weakness is pathing, as I found the AI could struggle with walls blocking areas or tight spaces.

Sailing is the main mode of long distance travel in Pillars of Eternity II: Deadfire. The game does a decent job of making it more than a mindless endeavour by requiring players to staff their crew and manage supplies as time progresses at sea. Ship to ship combat is handled with a simple board game-style mini-game. The system strikes a nice balance of realism without being intrusive or extremely monotonous. 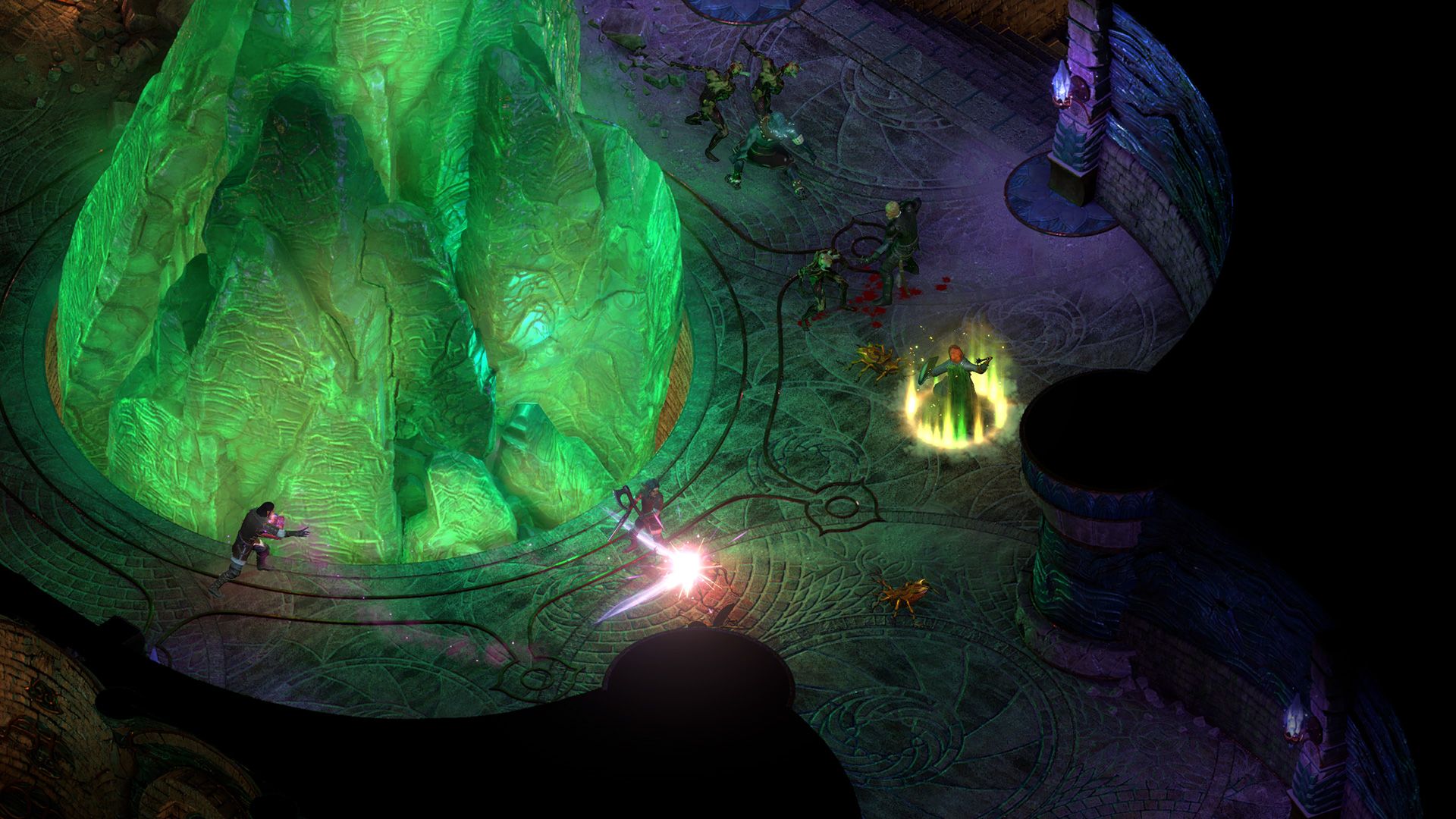 Pillars of Eternity II: Deadfire is polished enough to be playable, but small bugs are still popping up. For example, the voice over system has a habit of playing two voice lines at once when skipping over text. The odd quest may accidentally lock out certain alternative solutions, though quests are still completable in one way or another. The bugs were never bad enough to inhibit gameplay, but still common enough to be noticed. Pillars of Eternity II: Deadfire is struggles a bit on load times and will likely benefit from being installed on an SSD.

The controls in Pillars of Eternity II: Deadfire are decent. The game can almost entirely be controlled with a mouse, though keyboard shortcuts will make things easier. The default UI is serviceable, and the game offers several variants to fit player tastes. The characters and camera move a bit slow for me, but the options provide enough controls to tweak things to my liking. I found selecting and managing character movement wasn’t as intuitive as I liked, but the quirks are not too difficult to learn either. 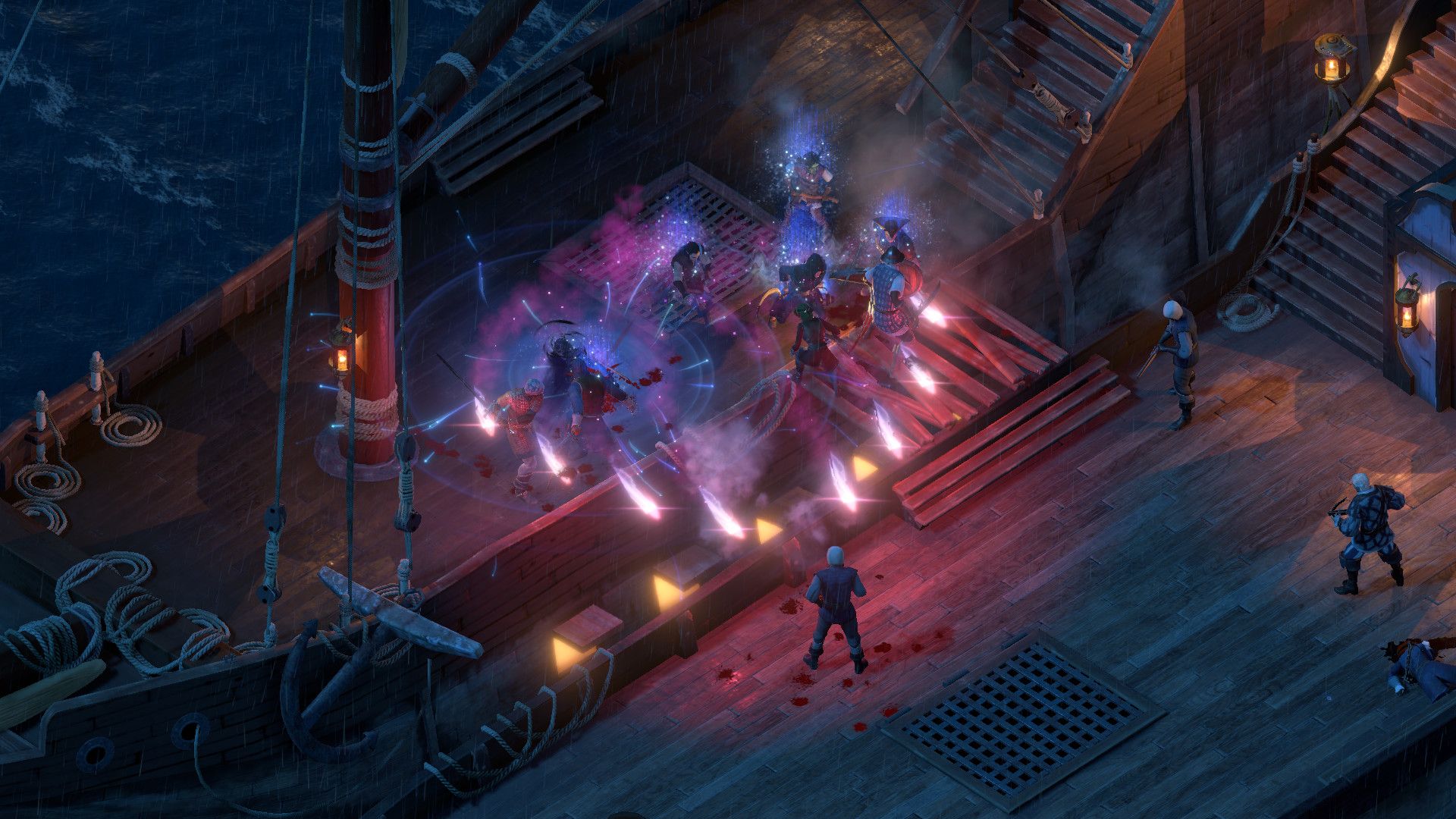 Pillars of Eternity II: Deadfire maintains visual the style of old school isometric RPGs with a healthy resolution bump. The artwork looks right at home in you favourite pen and paper RPG rule book. The lighting effects received an upgrade in Pillars of Eternity II: Deadfire, and the artists have clearly put the new effects to work. There are plenty of dark maps lit up with eerie glows, with combat adding more flashes of colour.

The audio experience in Pillars of Eternity II: Deadfire is solid. The music is an enjoyable accompaniment to gameplay. The sound effects are of high quality. The game’s dialogue is completely voice acted. A few of the important scene descriptions also have voice acting, but most are text only. The voice acting is good on a whole. Main characters all feature high quality voice acting. Most of the minor characters put up decent performances, but a few pale in comparison to the main characters. 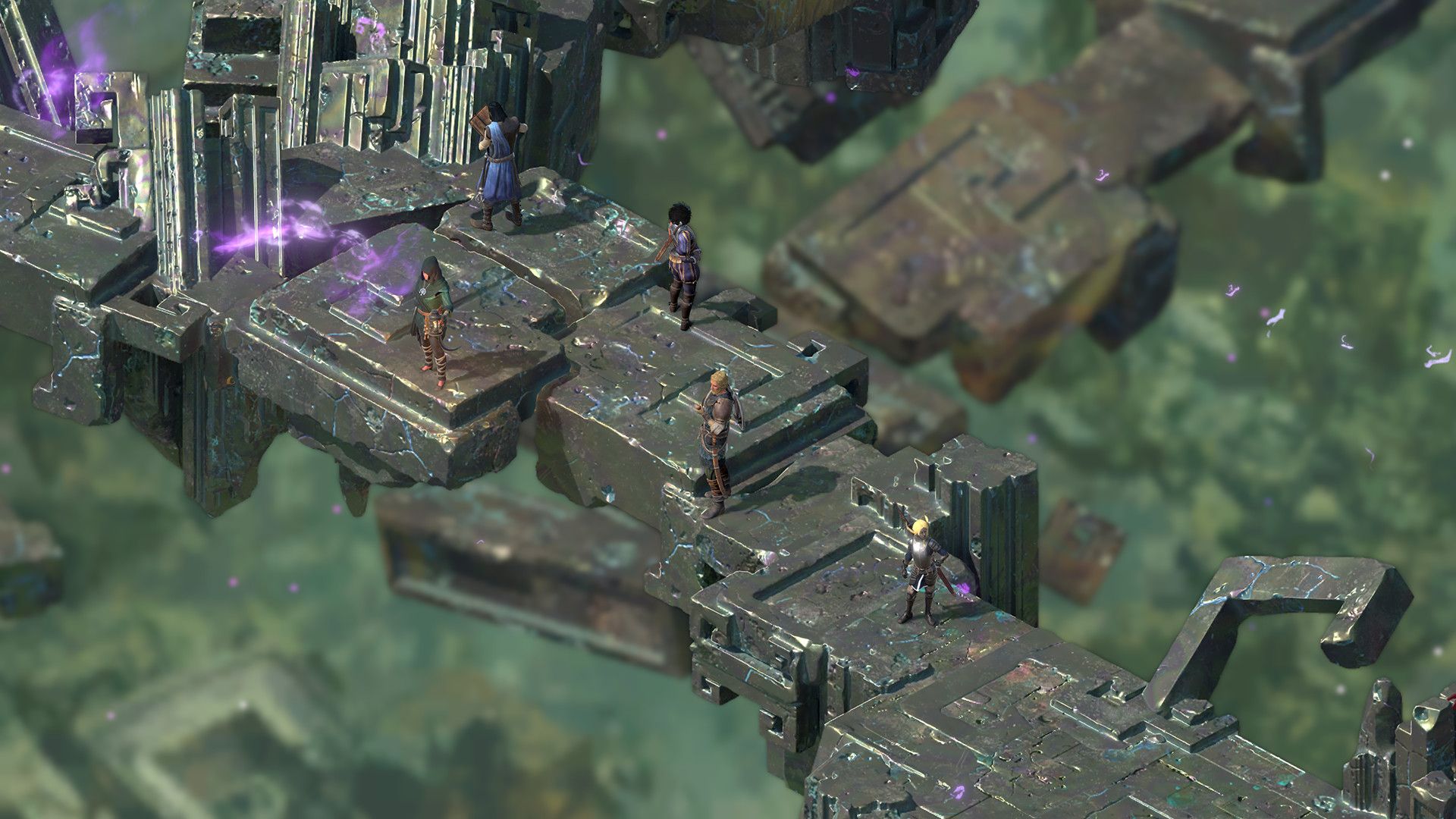 Pillars of Eternity II: Deadfire is a solid old school RPG. The audio/visual experience is top notch.  The game is set in a beautiful, nuanced world that explores a very relevant topic in current society. The gameplay is does not stray far from the games Pillar of Eternity II are inspired by and delivers it in a refined way that is accessible to new players. The game does need a bit of polishing, as small bugs and hiccups are still being ironed out. While we may never see another Neverwinter Nights title, Pillars of Eternity II: Deadfire does a great job of scratching that itch.

A solid old school RPG made for a modern world.
8.5