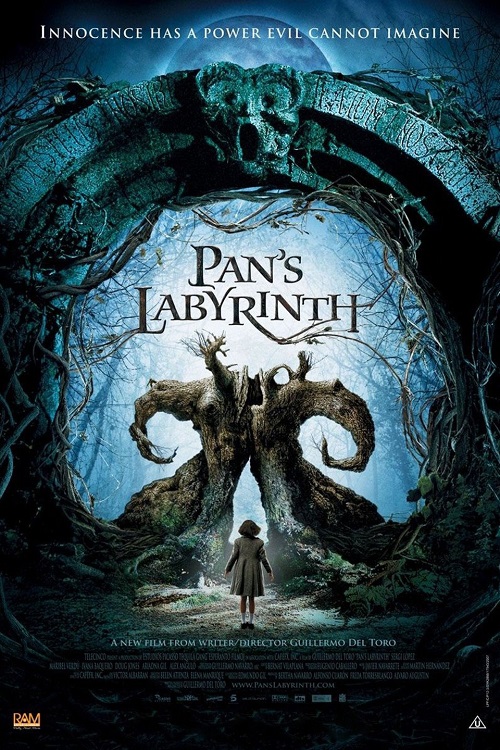 I consider myself a fan of Mexican director Guillermo Del Toro and I have consistently enjoyed his work. I’m especially a fan of his genre work which I feel is particularly inspired by his own very earnest love for all things geeky and strange. I was excited to see that the good folks at In the House would be screening one of Del Toro’s best known works and eagerly found my way to their screening.

Our MCs for the evening for Jason ‘Jabba’ Davis and Jill Wall who, after giving a heartfelt goodbye to Anthony Keiran (the manager of George St Cinemas), sat down for a quick chat about the film’s trivia. One particular tidbit which stuck out for me was the fact that during the production, the crew had to take certain precautions for shooting in an area which was experiencing a severe drought. This essentially meant that the crew couldn’t make explosions to film and even went as far as avoiding the use of fake blood because apparently it’s flammable enough to be a concern. 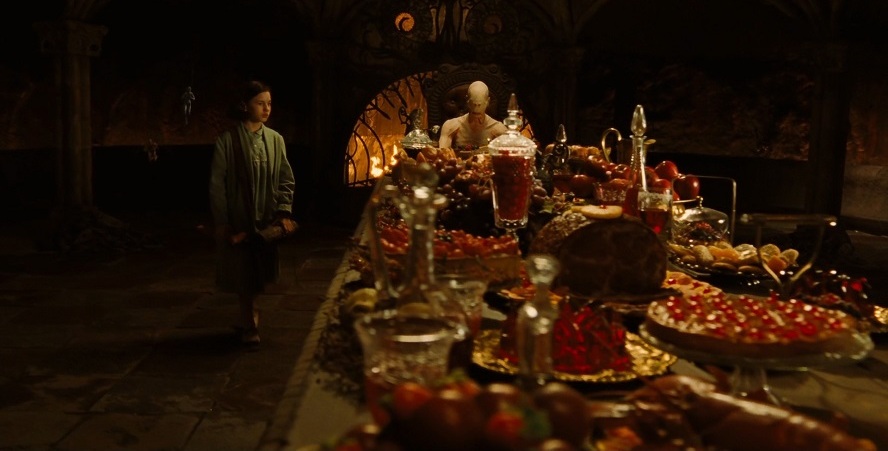 Our story starts off with a fairy tale about a princess of the fairy underworld who visits the human world where she gets trapped and dies with her soul being trapped. Our story cuts from fantasy to the grim reality of immediate post-civil war Fascist Spain and we meet our protagonist, a young girl named Ofelia (Ivana Baquero) and her mother Carmen (Ariadna Gil). The two are travelling to be with Carmen’s new husband, Captain Vidal (Sergi López), who has been assigned to hunt down Republican guerrillas in the Spanish countryside. Ofelia is befriended by small fairy who leads her into the centre of a mysterious stone labyrinth wherein a mysterious faun who tells her that she is the princess of legend. He sets her off on quest to perform three tasks before the next full moon or her spirit will remain in the human realm forever. As the conflicts of the adults rage around her, she tries to navigate the grim waters of the real and fantastical worlds. 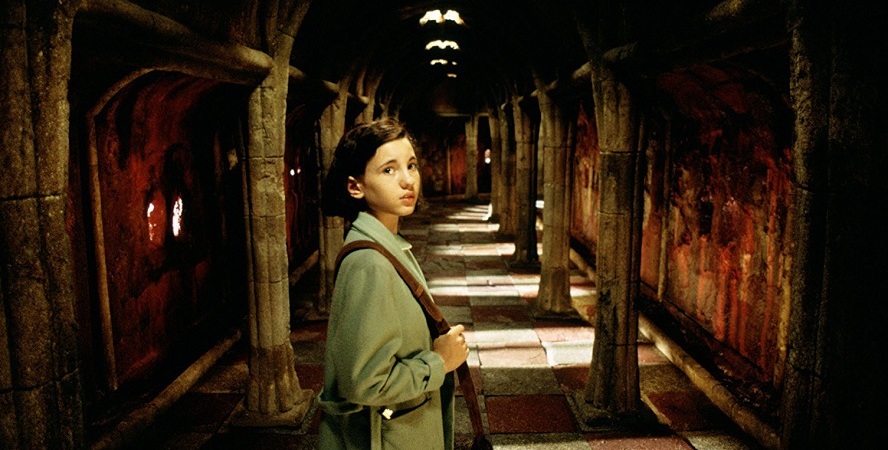 The story is simple but strong with two very separate plotlines being followed by Ofelia and the Captain and the film draws comparisons between their own struggles. They are both seeking a prize that eludes them and the clock is ticking for both. To this end, the performances from both actors needed to be strong with López especially putting his all into the character. Apparently López was considered by producers to be a bad fit for the production as he was assumed to be only a melodramatic or comedic actor but he evidently put a lot into the performance so as to break out of that mould. Baquero is similarly strong and her character reminds me a lot of Chihiro from Spirited Away; a flawed girl but ultimately a hero.

A fundamental theme that runs throughout this film is the formative power of the stories we grow up with. Ofelia’s fascination with fairy tales is what drives her to pursue the quests of the faun and escape the darkness of her real world. We see a twisted reflection of this in the captain’s own obsession with stories of his father’s military adventures and how that informs his adult fascist ideology. It’s a pleasure to see a film explore such overt political themes through a fantastical lens but, as my companion for the film pointed out to me, these thematic concerns can be a bit on the nose at times. I didn’t notice this while I was watching the film but I really should have been clued in when the film decided to largely refer to one of it’s main characters in a very Brechtian fashion as “the captain”. On reflection, the reason for that might be due to the fact that I found the film’s thesis to ultimately be a poignant one which appeals to me a storyteller. I still enjoyed the film and it’s narrative but just a heads up that it may bludgeon you over the head (with a wine bottle) with it’s thematic concerns. 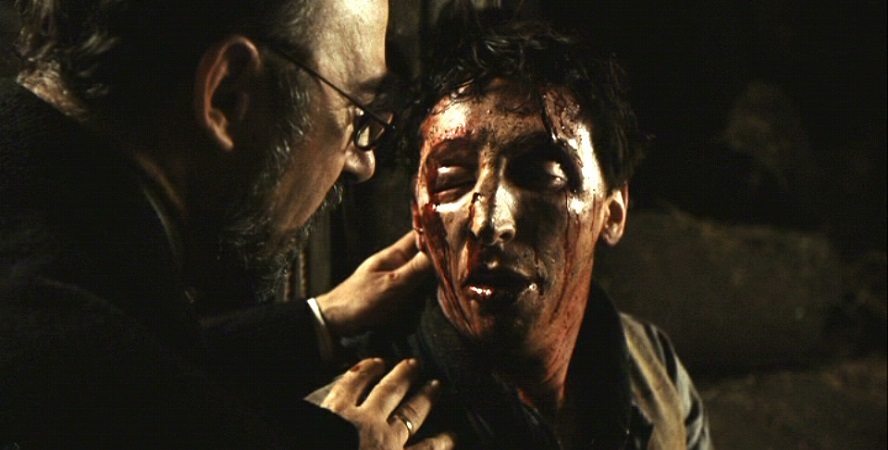 The film is similarly overt with how it alludes to other stories dealing with escapes into flights of fantasy. Although these comparisons are, in a large part, accurate; what sets apart Pan’s Labyrinth is it’s dark and uncompromising tone. This is a fairy tale which features violence, death, sadistic torture, and mortal danger for it’s characters and protagonist. Del Toro pre-empted and explicitly references Alice in Wonderland with one of Ofelia’s costumes which appeared very similar to one of Alice’s dresses. He knew that his film was going to be compared to that story and to drive the point home that his film is darker and grittier; Ofelia’s “Alice” dress is covered in mud after she crawls into the roots under a tree. The point of this is that: sure, this is a fairy tale… but not the sanitised Disney stories from your childhood. The story will progress, our will suffer, and the ending will be oh so bittersweet. 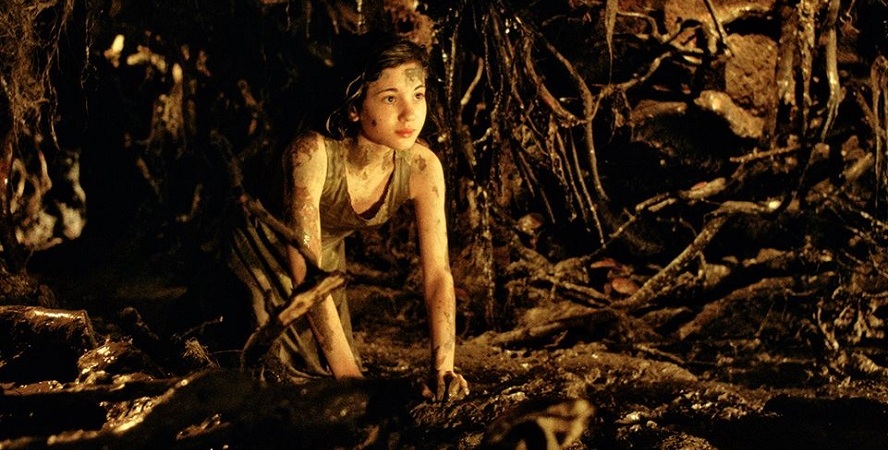 The film’s visuals are almost uniformly imaginative, harrowing, and beautiful (in a twisted way). All the fantastical elements of the film have a unique design to them with the faun especially appearing to be a strange amalgamation of tree, animal and man. One of the intertitles before the film stated that Del Toro got the design for the faun from a lucid dream he once had and I completely unsurprised since there’s a strong vein of surrealism that runs throughout the film’s visual designs. It’s a design choice which reflects the film’s fantasy elements and serves as a reference to Alice in Wonderland.

The one drawback I do have in terms of the film’s visuals is its CGI for the scenes set in the real world. Off the back of what Jabba and Jill said before the film, I understand that the film production couldn’t create real explosions (or use fake blood) for fear of starting a fire during a drought. Nonetheless, the effects don’t particularly hold up all that well and look a bit like they’re out of a late 90s video game. It’s not particularly jarring but since there’s pretty much nothing else I can think of to nitpick, there you have it. 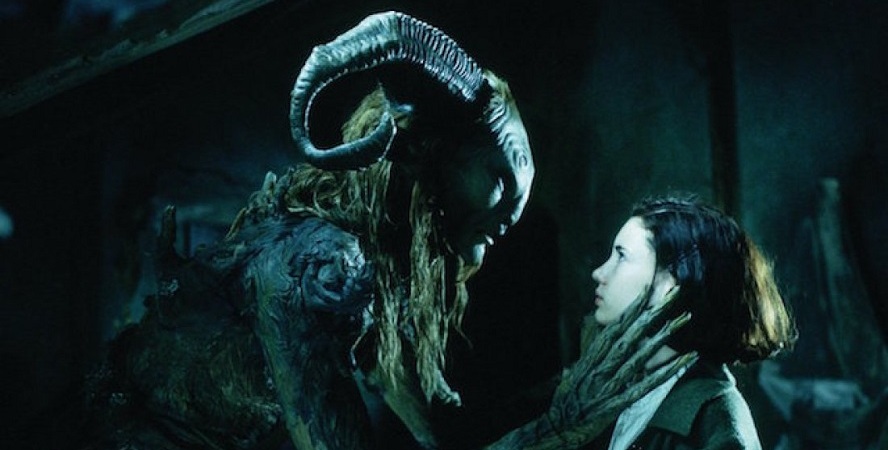 The music perfectly matches and complements the bittersweet story with haunting melodies. The main theme, in particular, uses a simple structure and vocals to evoke the feeling of a melancholy lullaby. The orchestral score is adaptive; for example, it takes on a more militaristic beat for the scenes which feature the captain and the tribulations of the adults. For the most part, the soundtrack does a great job of punctuating the emotional beats of the film but might be a bit on the nose (which this film does do occasionally)… however, I’d warrant that you’d probably miss because you’d be so enamoured with the main theme. 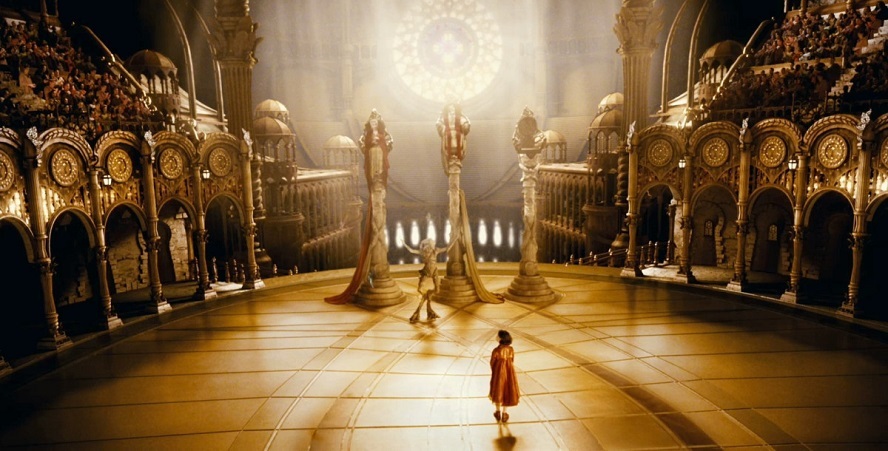 Overall, this was an excellent film to watch and I’m glad I had the opportunity to watch it up on the big screen. The story is delightfully dark with strong thematic concerns which may be a bit blunt for some people. The creature design is especially inspired with a strong undercut of surrealism which is only undermined minorly by less than superb CGI in places. The film’s musical theme will probably haunt you long after the film’s runtime has finished. It’s a film which revels in both it’s fantastical and dark elements and I have no problem whatsoever recommending it to anyone who might be interested.

Kudos to In the House for screening such a modern classic and for other films which In The House is screening, feel free to check out their schedule for the season here.
Capsule Computers review guidelines can be found here.

Pan's Labyrinth is a modern, dark fairy tale which earns it's status as a cult classic through strong storytelling and visuals.
9