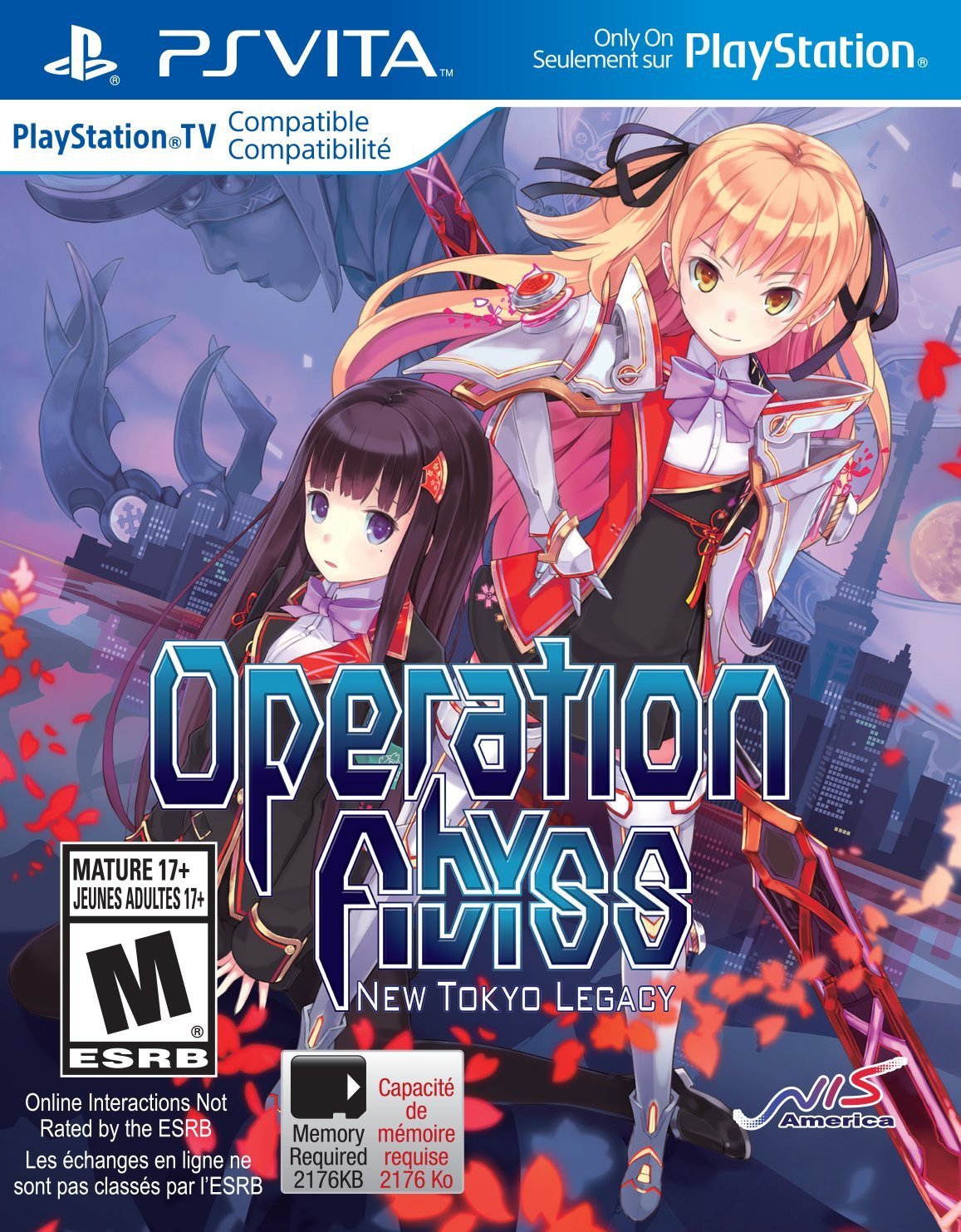 Overview
Except for a few exceptions, first person dungeon crawlers nearly faded from existence in the West. However in recent years with the rise of indie developers and the popularity of the genre growing, more Japanese dungeon crawlers have begun to make their way overseas. With numerous titles proving that there is still life left in such games, NIS America has localized Operation Abyss: New Tokyo Legacy. Developed by the same staff that worked on Demon Gaze, is this title worth picking up?

Story
Sometime during the 21st century a large number of unknown creatures began appearing throughout Tokyo. Called ‘Variants’ these creatures are almost entirely immune to modern day weaponry, making the police as well as the army useless. Thankfully a number of youngsters happen to be specially suited for combat against these beings and in order to stop the Variants from running wild the Code Physics Agency has formed The Xth (pronounced as Zith) Squad.

It is up to the Xth Squad to take on these Variants where they are most commonly found, dungeons that have been called Abysses. Now it is worth noting that due to the player being able to create their party from scratch or use a pre-made party (more on that later) that there really isn’t too much of a solid storyline to be told in Operation Abyss: New Tokyo Legacy. 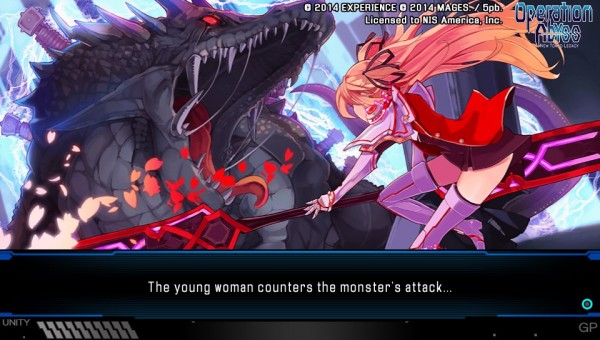 While there is some solid writing at times, times where the game either completely floods the player with information or result situations that are barely explained occur far too often. It also doesn’t help that the actual named characters in the title are poorly handled while the core storyline is far from being noteworthy other than featuring a sci-fi type of setting that is rarely used in dungeon crawlers such as this. It is worth noting that the writers do manage to pull things together near the end of the game though it will be quite a chore to get that far.

Gameplay
Now when beginning the game, players can choose between Classic Mode and Basic Mode. Those who choose Basic Mode will allow players to select from character portraits and are automatically provided with a fairly balanced squad of fighters to start out with. Those who happen to select Classic mode will have to deal with completely customizing their characters from the ground up and dealing with possible imbalances.

I say this because while very few dungeon crawlers will hold the player’s hand, Operation Abyss: New Tokyo Legacy features an extremely poor tutorial section making it incredibly easy for newcomers to find themselves lost trying to create a balanced group of fighters. Of course those who are more familiar with these types of games may find themselves able to adapt quickly, the problems consist further into the game due to some of the most basic systems featuring alternate names from what most players will be used to, such as buying items by “issuing” them or adjusting the “Blood Codes” for each character which serve mostly as their class base. 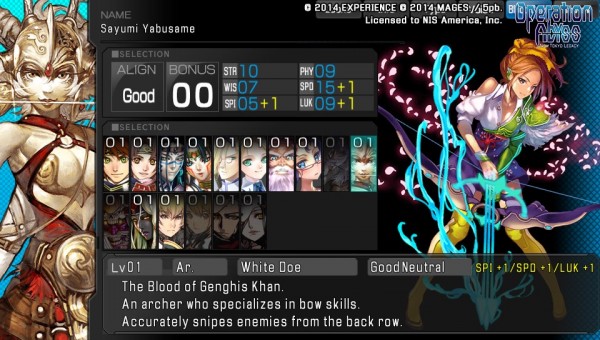 Once you do manage to get a team put together, or (as I would recommend) opt for the pre-selected group, players will quickly find themselves spending most of their time exploring the labyrinths. As you explore these dungeons in the standard first person view, players will randomly encounter enemies who will be fought in a similar manner. Now once you do actually enter combat of any form, the six player party is split into a front and back row where they will then attack rows of enemies at a time using various attacks and skills ranging from standard attacks to buffs and de-buffs.

It is worth noting that the longer you actually stay in the labyrinth at any given time actually increases the difficulty of the enemies you encounter. This is handled by an Encounter Gauge that slowly fills up as you make your way through the labyrinth and enemies begin to match the high level of the gauge. Interestingly enough, this creates a great incentive to push your party to its limits since harder enemies reward players with plenty of bonuses but it also increases the likelihood of being trounced by simple random encounters. 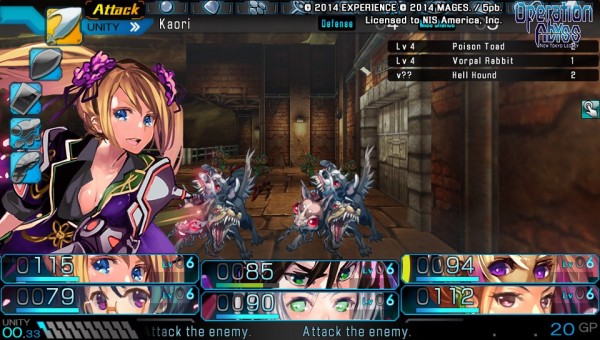 Of course at the same time, players must also be mindful of the traps that can be spread throughout the labyrinth as it is entirely possible to fall victim to some dangerous traps. Operation Abyss: New Tokyo Legacy introduces this mechanic quite early through a frustrating dungeon with hidden teleportation tiles so it is good to get used to this mechanic, even if the first dungeon just so happens to be the most annoying of the bunch.

While the player’s main goal of venturing through each Abyss is to complete their main objective, many of the side-quests that players can take on can usually be completed at the same time making it easy to double-down on certain dungeons, though it is worth noting there is still a noticeable level of grinding required for this game. While hardly as challenging as some other dungeon crawlers, the aforementioned Encounter Gauge can lead to some risky ventures, though proper planning usually can allow players to avoid such situations. 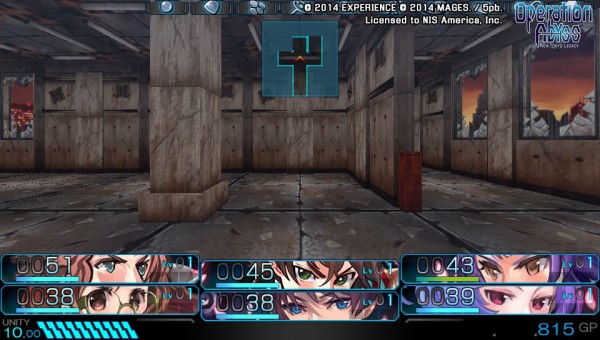 Unfortunately, despite having a handful of unique mechanics and changing a few names of well-known systems, Operation Abyss: New Tokyo Legacy doesn’t offer much in the way of variety from other dungeon crawlers. What the game does it manages to do well, however it brings almost nothing new to the table to entice players who are looking for something a little different from their dungeon crawling titles.

Visuals & Audio
One of the aspects that Operation Abyss: New Tokyo Legacy does have going for it, as mentioned earlier, is the sci-fi style that most of the game sports. By not regulating players to the standard medieval world there are a number of new environments that can be explored. That being said, labyrinths are rather poorly handled with very little variation as repetitiveness quickly begins to set in, especially since a number of monster sprites are consistently re-used throughout the title.

This happens to be a rather unfortunate thing considering how detailed and colorful most of the enemy and character sprites actually look in the game. A wide range of colors are used to create some great looking opponents to fight against while the standard character sprites feature some great anime style designs though it is worth noting that character customized sprites do start out looking rather bland, but become better looking as you progress through the game. 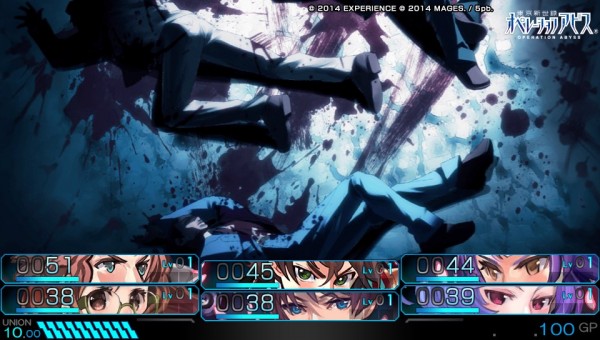 As far as the voice work goes, Operation Abyss: New Tokyo Legacy features an adequate English voice track while the background music features a number of catchy tracks which is a bit of a blessing considering how much time spent in dungeons and in combat, though don’t expect a ton of variety as many tracks are used consistently throughout the title.

Overall
Operation Abyss: New Tokyo Legacy is an adequate dungeon crawler that sports a solid combat system that may be seen as more approachable for some who have yet to cut their teeth on some of the more difficult dungeon crawling games out there. By bringing a few interesting things to the table as well as a unique setting, this dungeon crawler is certainly worth trying out for fans of the genre but don’t expect anything fresh as far as the game mechanics are concerned.