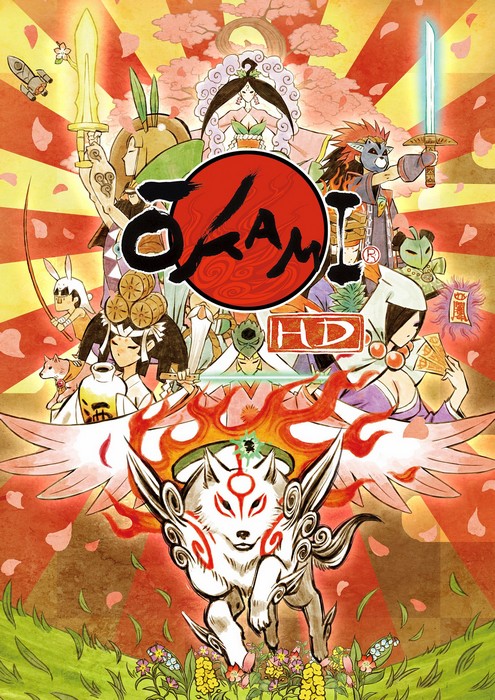 It’s been a decade since the last time I played original Okami and fell in love with it. When PS2 era came to a stop, I made a transfer to PC and stayed there, occasionally trying out some console exclusive every now and then. Still, I never forgot about Okami. My PS2 was no more so there was no way to replay it. The game would soon become my holy grail of potential PC remasters. Some of those later turned out to be real (like Final Fantasy IX and Bayonetta) and some are still nothing more than fantasies (like XIII, The Suffering and its sequel). But lo and behold, just a couple of months back Capcom announced that Okami is coming in December for Xbox One, PC and PlayStation 4. Sometimes, dreams do come true.

The game starts with a narrator telling us how, a hundred years ago, swordsman Nagi with his white wolf Shiranui fought and sealed the eight-headed demon Orochi, thus saving the Kamiki village. Fast forward to present day and we meet Susano, a descendant of Nagi who doesn’t really believe in the heroics his ancestor did. So in a great act of defiance and stupidity, he frees Orochi who escapes and drains all color and life from Kamiki Village, as well as the rest of Japan. Sakuya (a wood spirit and protector of Kamiki Village) summons the sun goddess Amaterasu and her comic relief bug-sized companion Issun in order to defeat Orochi. Again. Amaterasu takes over the form of white wolf Shiranui and that is how most of the characters in the game will see you and recognize you as. In order to defeat Orochi, Amaterasu has to locate 13 Celestial Gods all over Japan and receive their powers. And thus begins our adventure. 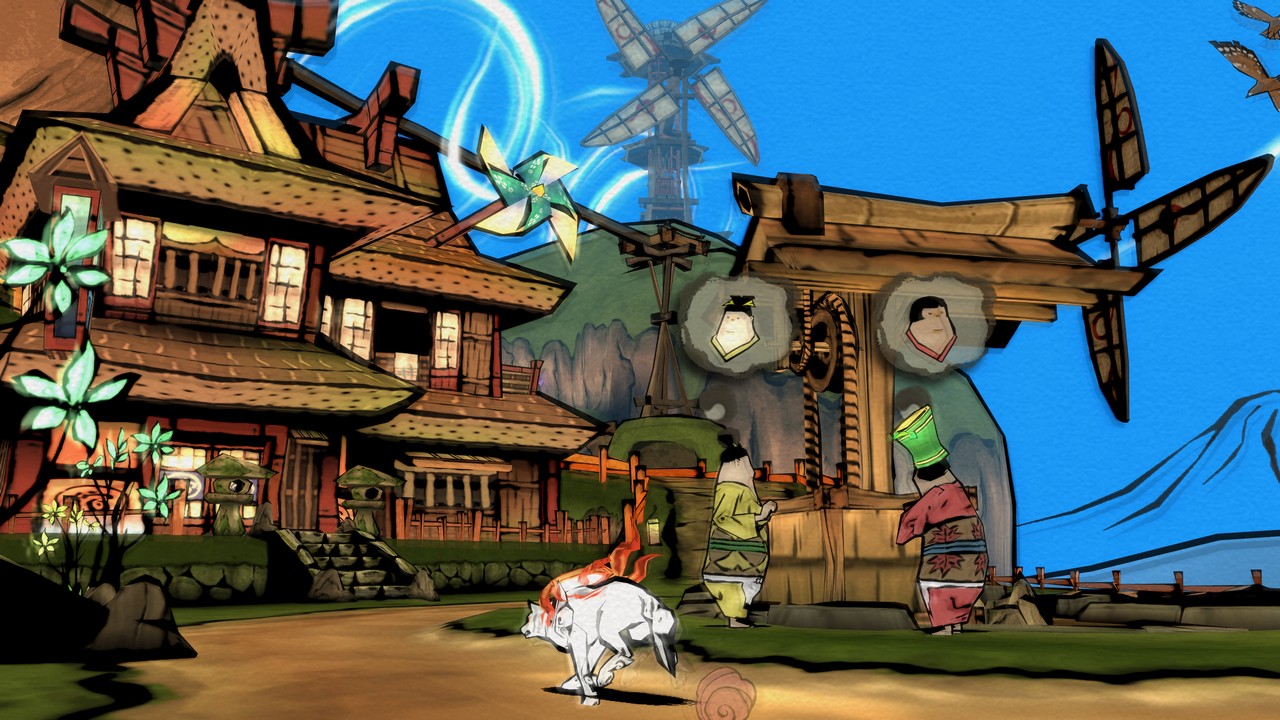 The powers we get from Celestial Gods are a big part of Okami’s gameplay and the reason what makes the game so extraordinary. Amaterasu wields the power of a Celestial Brush, a tool that can shape reality and helps us in battle. By pausing the gameplay, we can bring up the brush and draw shapes on the screen that will come to life. Let’s say you’re fighting some demons currently. Amaterasu has a decent number of attacks at her disposal but after you chip away some health from the enemies, you can also freeze the screen and do a swift brush stroke across the enemy (like you would cut him). And it only gets better from here! Aside from using the brush as finishing move on enemies, you can also directly impact the environment. Drawing an O shape in the sky will result in the Sun suddenly appearing, C shape would be the Moon aka night time and doing this /// will summon rain (cause it looks like rain falling, duh). In the end, the game is an exciting mix of platforming, original way of fighting and dispatching enemies and exploration of the world that’s instantly shaped by your actions. But wait, there’s more! Let’s step into the next section of this review and learn about another thing that makes Okami so good. 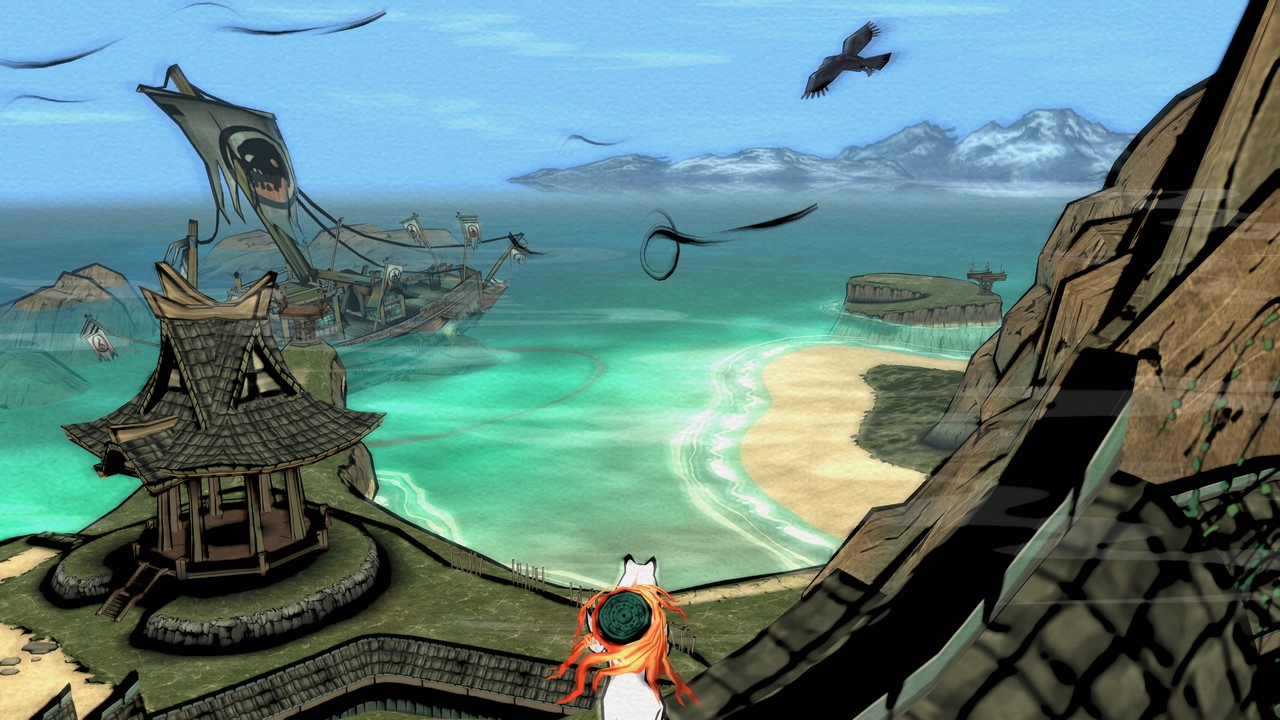 Saying that the game carries a cell-shaded appearance would be true, but also a huge understatement. The said rendering technique in Okami is backed by incredibly detailed characters and environments with a soft, dream-like color palette. This results in being rarely aware that you’re playing a game but more like you’re traversing through a constantly evolving, watercolor stylized painting. The whole approach was made in an attempt to emulate Japanese Sumi-e art aka ink wash painting. All of that sometimes creates a rather peculiar side effect of playing Okami. Often I’d find myself running across the meadows and stopping in my tracks because I noticed the Sun is setting. And just like that, you’re observing something in the game that you wouldn’t miss for anything. Even though it is scripted and artificial like hundreds of next sunsets you’ll see, it doesn’t make any of them any less real. It’s just you, a big fluffy white wolf looking at the setting sun and being in the moment. This time in HD. And as an added bonus, now I have the luxury of spamming that screenshot key and uploading a bunch of them in Steam feed until everyone there eventually block me. 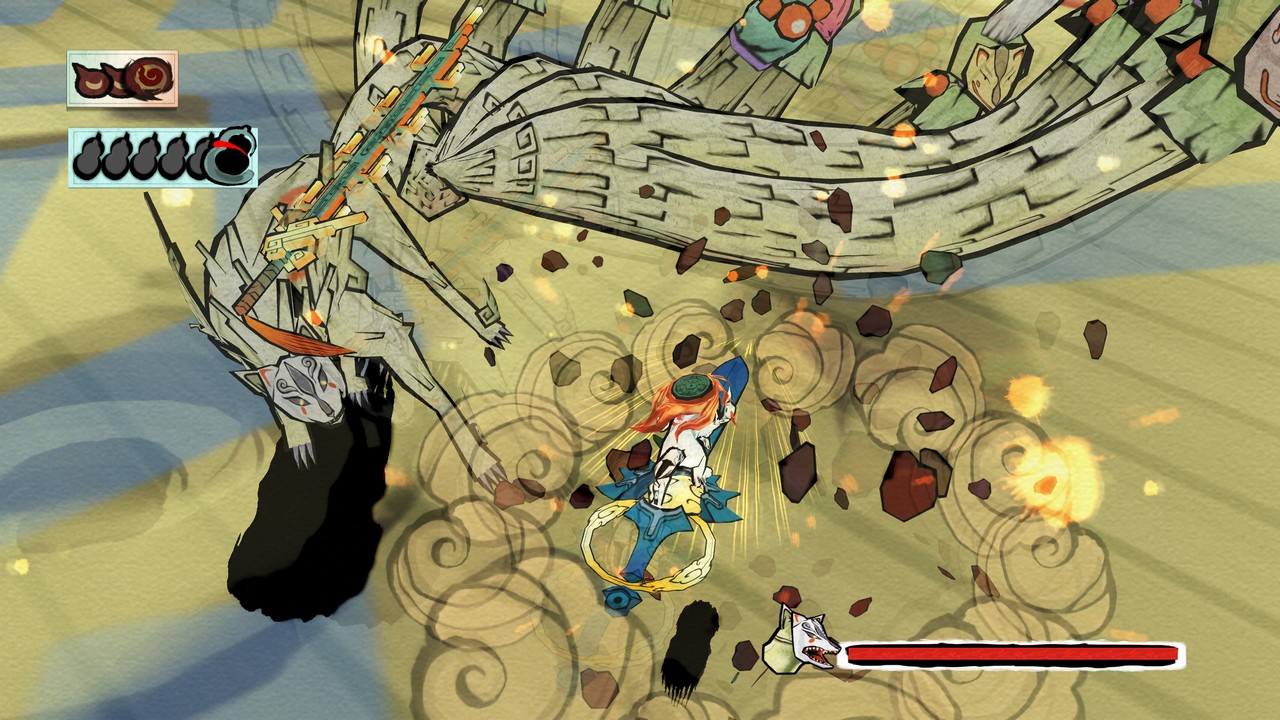 The soundtrack features many veteran composers from Capcom’s audio department, notably Akari Groves and Masami Ueda from Resident Evil fame. However, you won’t find any of the tranquil and ominous sounds from RE here. The music in Okami is influenced greatly by Japanese classical tunes with a more dynamic and upbeat sound, resembling the works of Yoshida Brothers.  It’s always there to tastefully complement the game aesthetics or amp up the adrenaline in you during boss fights. 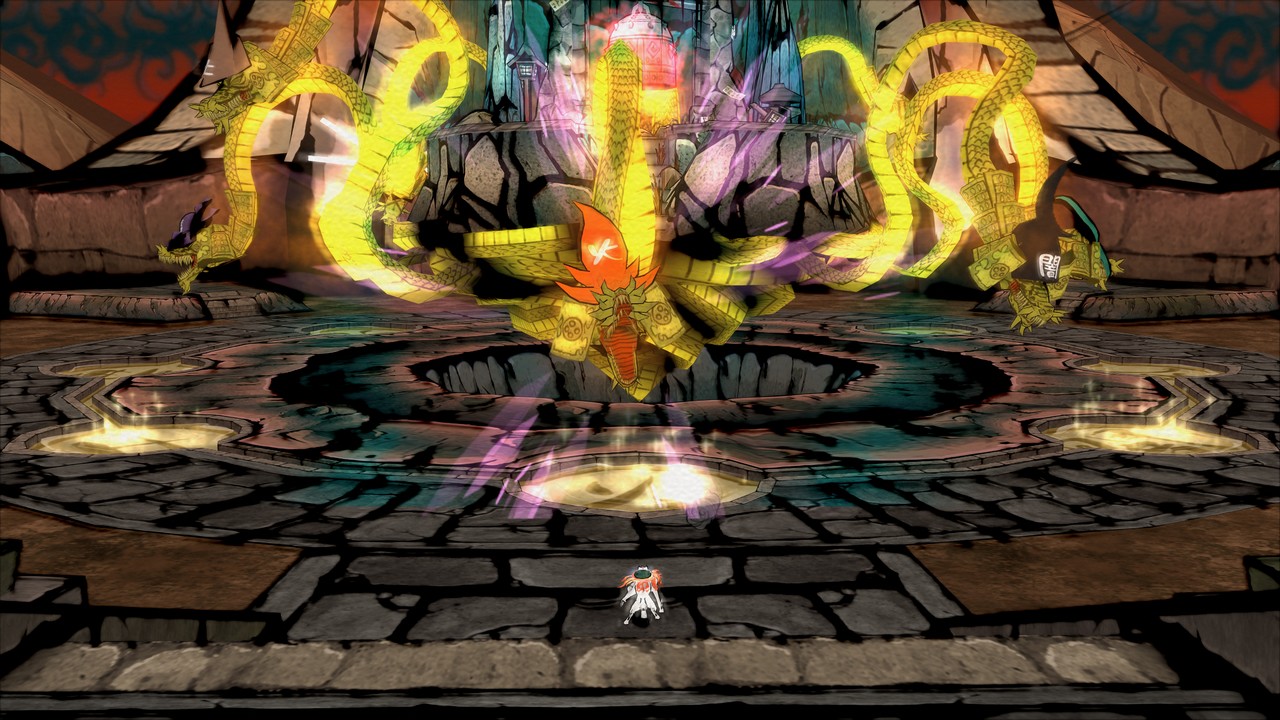 On top of being a great game by default, with unique gameplay mechanics and visuals, we also get some goodies with an HD release. Okami now offers 4K resolution support and you can also choose between modern widescreen format or the original release’s 4:3 ratio (for that old school feel). The only thing I could write as negative is a bit of pacing issue later in the game. There is a certain boss that you have to fight three times over in the same way and it feels like it there only to artificially inflate the game’s length. But even then, I feel like it’s more me nitpicking because it’s really hard to find a genuine flaw here. The game was good ten years ago and now it’s only better. The one thing that kept me on the edge was the fear that they would somehow screw up the port. Well, I’m happy to report that none of that happened. 30 fps lock is there but everything runs incredibly well with no bugs, glitches or any hitches (hey, that rhymed!). Only thing I’d recommend in the end is for you to fast forward the clock on your PC two weeks ahead, pretend it’s Christmas and reward yourself with a copy of Okami.
Capsule Computers review guidelines can be found here.

An acclaimed PS2 classic now available on PC, this time with a bonus of improved visuals.
9