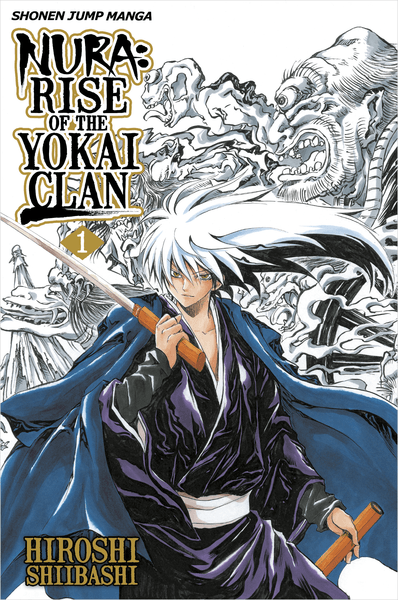 Overview:
Most manga have growing pains when they first start off, with the first chapter usually being the most interesting for the first 10 or so chapters. These first 10 or so chapters are the most critical point in a manga series – the make or break point. If you don’t get off to a good start, your manga will fail and will be cancelled from serialization in it’s respective manga magazine. In order to save themselves from such a fate, the first 10 or so chapters are usually vastly different to where the series will eventually go. So that makes it extremely difficult to judge how good a series potentially can be or will be. Most tend to drag their feet and build a popular formula that will last for several chapters until they know they have built enough of a following to try something different without risk of cancellation.

That is exactly the case with Nura: Rise of the Yokai Clan volume 1. The majority of the volume is dedicated to a tried and true formula, excluding the first and last chapters. This creates a sense of the story dragging it’s feet without much in the way of development outside of the first and last chapter. Not many series can successfully pull this off and many haven’t survived the dreaded first 10 weeks. However Nura has succeeded and moved on to be rather successful. Read on to find out why.

Story:
Nura follows a story many of us may have seen before but in an unusual setting that at first may catch you off guard. You have the hidden world of the Yokai (Monsters), that has been kept secret from humans for centuries. It is an interesting setting and provides something not often seen done. Although the concept of Yokai is something that is so thoroughly engraved into the Japanese culture lexicon that it may not be as much unfamiliar ground as it is for us Westerners. 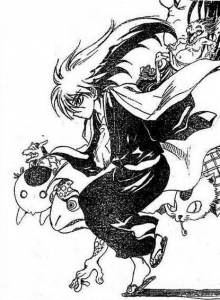 The storyline itself is somewhat of a mash up of ‘Reborn’ and even of a dash of ‘Bleach’. But I have to say it feels as though it very greatly draws inspiration from ‘Reborn’. Particularly in it’s titular character Rikuo Nura, whom is essentially Tsuna Sawada with Yokai blood. Both want nothing to do with the world thrust upon them (Yokai dynasty for Nura and Mafia family for Tsuna), yet both have a side of them that comes out in dire circumstances that is calm, cool, collected and ready to take up the mantle no questions asked (Night form Nura and Hyper form Tsuna). If Shiibashi was not influenced by Reborn in any way I would be extremely surprised.

The first chapter of the volume introduces us to the world of the Yokai and our hero Rikuo Nura who is set to become the third Supreme Commander of the Yokai clan. It does a good job at introducing things to us and is the stand-out chapter of the entire volume. However from there on out, right up until the last chapter we are privy to school based comedy about Rikuo’s classmates exploring supposedly haunted places. It’s rather dull and drags on at a snail pace, with little to no character development besides 2 of Nura’s yokai friends enroll at his school who get a bit of development. But it’s nothing to write home about.

The succeeding point of Nura is it’s potential. I can see it developing into far greater and more interesting arcs. I can also see myself investing in these characters with some time. The volume ended with what seems to be the beginning of the first story arc. This is a great sign for the series moving forward.

Characters:
It’s difficult to judge the characters so early on, we haven’t seen a lot about them apart from Rikuo. Unfortunately the characterization isn’t on the same level early on as such greats as ‘Hunter x Hunter’ and ‘One Piece’ were. But there is enough potential to fill a truck.

I found myself particularly interested in Rikuo Nura’s night form and his grandfather Nurarihyon. They both are shrouded in a fine veil of mystery and I definitely want to know more about them. I can’t say the same really about any other characters and I am already beginning to find Rikuo a little irritating in how stupid he can be in his normal form (inviting an exorcist into your house full of your Yokai family? Seriously Rikuo?).

Though as I said there is a lot of potential here and for this volume it did good enough of a job to make me care about what would happen to these characters.

Artwork:
Probably the most defining part of this series and in particular this volume is the great artwork. I love the character designs and overall art-style of this volume although it can feel rather cluttered when a large portion of Rikuo’s Yokai clan are shown in all their hideous glory. 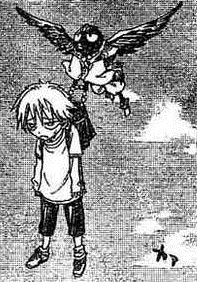 The first chapter struck me as both visually verbose, yet painstakingly detailed. From the wrinkles upon Nurarihyon’s brow to the unrequited poetry of sakura petals blowing gently in the wind, Shiibashi has put a great deal of effort into his artwork and it truly shines through.

The only thing I can hold against the artwork is the ugliness of it at times. But that is to be expected, I mean this is a series about yokai. I percieve it as perhaps  an intentional  juxtaposition to the beautifully drawn human characters. The yokai are by definition ugly, evil creatures who lurk in the shadows, with the goal of only bringing ‘kyofu” (lit. The Fear). Whereas the human’s are the innocent untouched canvas who can either become dark or stay pure. It’s rather brilliant for Shiibashi to be able to convey that with artwork, but he does so masterfully.

Conclusion:
Nura: Rise of the Yokai Clan volume 1 overall does a great job conveying what this series is about and where it could potentially take us. Although it may suffer from growing pain this volume, it seems to have great things to come with the beginnings of the first main story arc forming in the final chapter.

I will definitely be checking out volume 2 of this series and consider it too be one of the best new manga series I have read in a fair while. With interesting characters and concept Nura will undoubtedly take us to some interesting places, we just have to sit tight and wait patiently to get there. If you enjoy Reborn or Bleach this may be up your alley and I definitely reccomend it to fans of the Shonen genre or action manga in general.

I give Nura: Rise of the Yokai Clan volume 1: