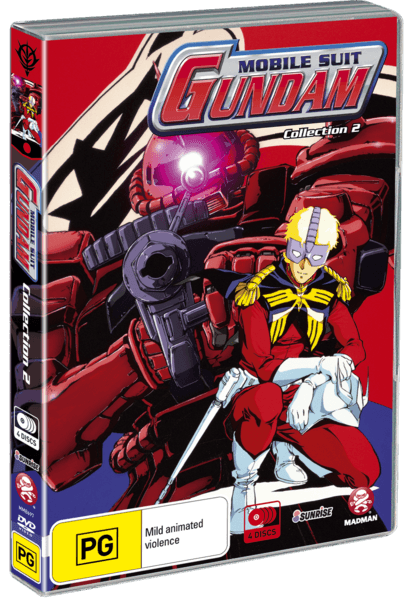 Overview
There is no doubt that the Mobile Suit Gundam series stands as a testament to the success of anime as an entertainment medium. The original series released in 1979 set the benchmark that would see the boom in success of the mech anime genre in the 80’s and 90’s. Countless sequels, spinoffs and even knock-offs flowed into the Japanese entertainment market, and Gundam became one of the biggest techno cultural icons of a generation. However, for all of its fame and fandom in the East, many anime viewers in the West are much less familiar with the origins of the franchise. Many viewers who became fans of anime in the 90’s, such as myself, were introduced to the Gundam multiverse in one of the successful sequels, like Gundam Wing, or G Gundam in Cartoon Network’s Toonami or on the odd free-to-air anime timeslots. DVD releases in the West of the original series now have the potential to change this. 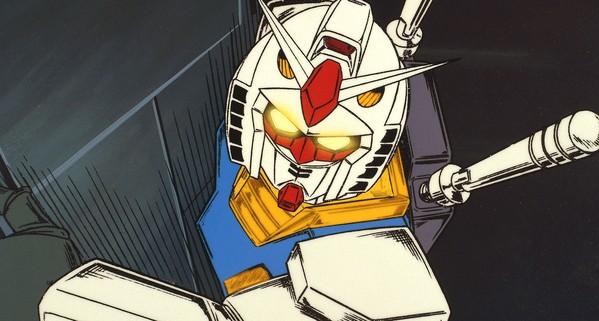 Regular readers of Capsule Computers would recall that I reviewed Mobile Suit Gundam Collection 1 in late 2011. Now the second of two collections has finally made its way onto DVD to finish telling the Story that Collection 1 began.

Story
Several months have passed since the series hero Amuro Ray first took up the controls of the Mobile Suit codenamed: Gundam. In those past few months he has experienced both triumph and loss, as both friends and enemies lost their lives to the War between Zeon and the Earth Federation. Now acting as a fully-fledged solider of the Federation, Amuro, and his friends aboard the prototype warship White Base must now play a part in ending the conflict for good. He and his friends have improved their skills as pilots and are now dedicated to seeing Zeon defeated. However, Amuro’s arch rival Char Aznable has also improved, and has stumbled upon a power that will send ripples throughout the Gundam Universe for years to come. The advent of the new race of human beings called ‘Newtypes’ suddenly changes the focus of the series off the ongoing war, and into a philosophical and ideological struggle for the main characters. 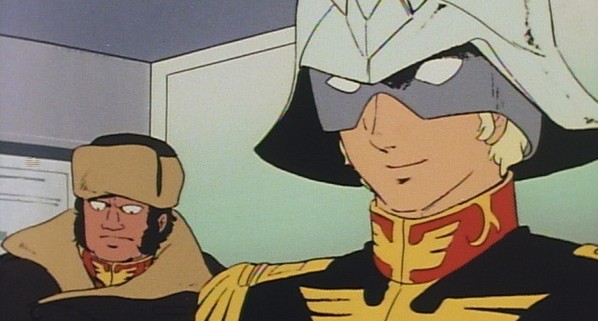 I feel the story portrayed in Collection 2 of the series deserves credit for advancing the story at a much better pace than the first collection. While the story presented in the first half was good, the flow was disjointed at points and the overall progression from the grassroots story into the real heart of the war was painfully slow at points. This second collection starts off in the midst of the action. The story flow and advancing stages of the war are better paced and the rapid movement of events serves to increase the tension of the series. However, the later acts of the series felt like they happened to quickly and could have been better spaced out in the screen time that many of the earlier episodes seemed to needlessly consume.

There is quite a bit of character development to be seen, but most of it is done by the 2 lead characters: Amuro and Char. Sure, there are scenes where supporting cast members like Kai Shiden have their own characters explored, but the central focus is placed on Amuro, Char and a chance meeting with a mysterious girl and a strange power that awakens in both of them. While the war is never really forgotten, the focus of the anime shifts rapidly towards the idea of humanity evolving into Newtypes. It becomes the centre of the conflict between the main protagonist and main antagonist. Overall the story is still enjoyable and intriguing, but viewers will have to be prepared to adjust themselves when the pacing starts to fluctuate. Remember to watch with an opening mind and consideration for the fact that this series has aged almost 35 years.

Visuals
Despite the slight rushed tone of the story closer to the finale of the series, thankfully, the visual standard was not representative of that. From beginning to end, the series retains its colourful, but surprisingly well defined graphic style. The level of detail applied to the Mobile Suits and action scenes in particular were the most enjoyable to watch. I will still admit that the bright colour is still perplexing, and that where detail went into the graphical design of the mobile suits and effects, the same could not be said for character models. One particular case of this is a Federation officer named Matilda. A lady whose hair may have just as well been spray painted in MS paint in a single monotoned, undetailed faded red. Again, this is a sign of the limitations of the technology at the time, but I feel that even with a re-release that some visual touch-ups could have been made to the character models. 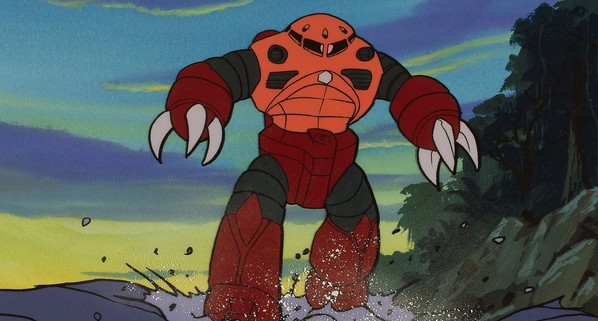 Minor complaints aside, the visuals do a very good job at portraying the original Gundam universe. The screen never seems too overloaded with visual information, which is good, and allows viewers to follow along with the pace of what exactly is going on. In contrast to the gritty metallic confusion of scenes that makes up the Transformers movie franchise, you can always tell what’s going on with these mobile suits. While it still retains the visual style of an anime that may seem far too old for this day and age, it still stacks up as a reminder of a series’ more humble beginnings.

Audio
Although both DVD re-releases of the anime have made efforts to retain elements of the original series, I feel that the audio applied to the show could have undergone some changes. Namely some of the musical scores. Even after the entire series, I still can’t get used to hearing that original Gundam Theme Song. It seems far too upbeat for a series that is centred around the concept of war and loss. While the sound effects are well appropriated and in fact very unique (such as the ‘Newtype-sense’ riff) much of the soundtrack just sounds decrepit. However, it still performs it’s function well enough to invoke the intended emotional response from the viewers. As mentioned before, the most epic battle music is reserved for clashes between Char and Amuro. As long as a series is able to establish that sort of subtle connection, it will retain its viewer base. 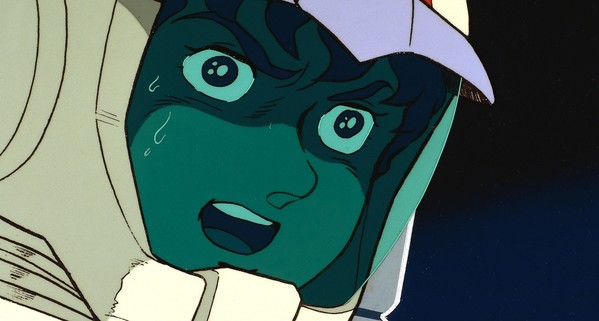 Like the previous collection, I have to reinstate that the character voice acting in the second series collection is a massive mixed bag. While some characters have awesome voice-work to compliment them, (such as Char, Sayla and Bright Noa), other characters, particularly amongst the main cast have had their English translations made long-winded and unnecessary. The voice of the main character Amuro, as done by Gundam veteran Brad Swaille, is decent enough, but characters like Kai Shiden I want to gaffer-tape their mouths shut. However, the voice actors can’t really be at fault for the translations. Meaning and context unfortunately can’t be perfectly carried over language barriers. It is by no means a series breaking issue, though it does get a little irritating to listen to over and over again. Let’s just say I get very disappointed when certain characters have the potential to die but ultimately don’t.

Extras
Like many Madman published anime DVD’s, Mobile Suit Gundam Collection 2 comes with the option to watch the show in the original Japanese dub, and in English. This is an interesting feature for anyone who wants to either watch the show as it was intended and created, or for anyone that just got plain sick of some of the English voice acting, especially by the support cast. Like the last collection, the 4th disc also contains a trailers section that advertises 5 OTHER Gundam series and a few other pieces of anime. 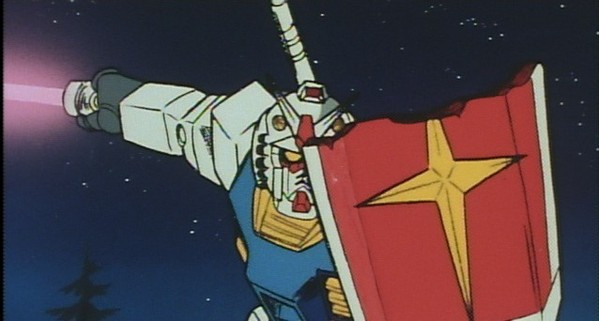 Overall
While I feel that the story flowed at a much nicer pace in the second collection, I feel that the overall appeal of the series was lost slightly over the time between the 2 collection releases. The main problem is the sudden change in pacing. It felt as though the story took too long to get started with the real conflicts that appeared later in the series. Conversely, when it finally did reach the climatic battles close to the end, the conclusions felt too fast, as though the ending few episodes were rushed. This was also unfortunately complimented by some very mixed VA work. Again, this is reflective of the time in which the original anime was released. Don’t get me wrong, the series still stacks up quite well, but perhaps not as well as it did in 1979. But, as every person has an ancestor, and the greatest tree needs a seed to grow, the original Mobile Suit Gundam series provided the necessary groundwork for the mech genre and Gundam franchise to grow and evolve into the anime cultural icon it is today.