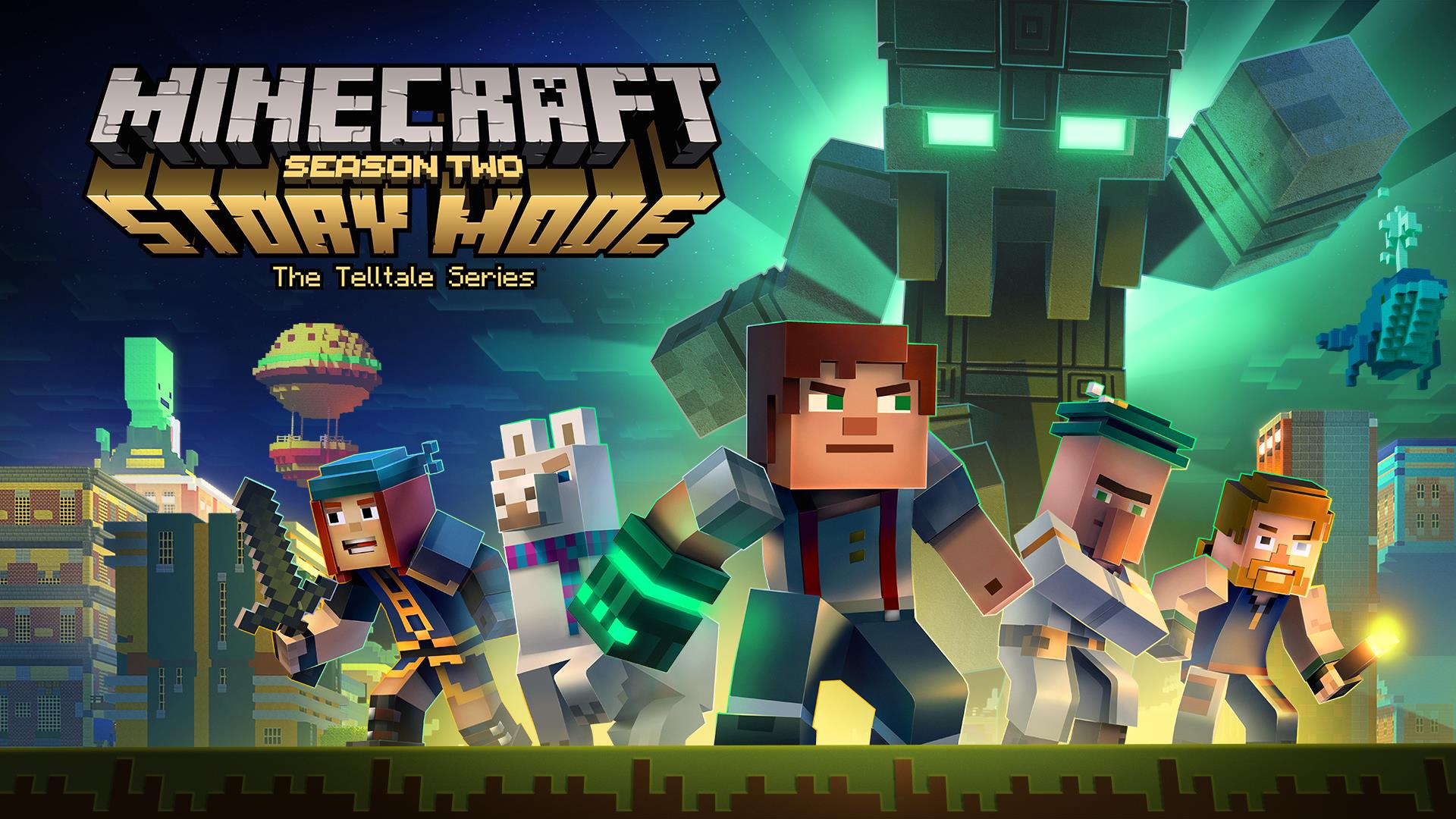 Even with the high popularity of the series as a whole, the nature of Minecraft as a game had many wondering if an episodic series set in a Minecraft world could be successful. It didn’t take long though for the first season to get an entire expansion that continued the journey of the characters past the initial ending and less than a year after the final episode of the first season was released we now have a second season. With Minecraft: Story Mode’s second season kicking things off with “Hero in Residence” does the story manage to pick up successfully with a new journey for our heroes?

In an effort to quickly bring newcomers to the series up to speed Hero in Residence begins with Lukas giving players a recap of the key events that took place during the first five episodes of the original story with some minor tidbits included for the “adventure” part of the first season. This is handled smoothly thanks to the fact that in the time since the first season has ended, Lukas has begun to write books about their adventures while the rest of the cast has settled into their own roles. Jesse has become the leader of Beacontown, a place where residents are free to express themselves with their builds, while Alex and Olivia have taken up residence as lead members in Boom Town and Redstonia, and Ivor continues his travels through the world portals. 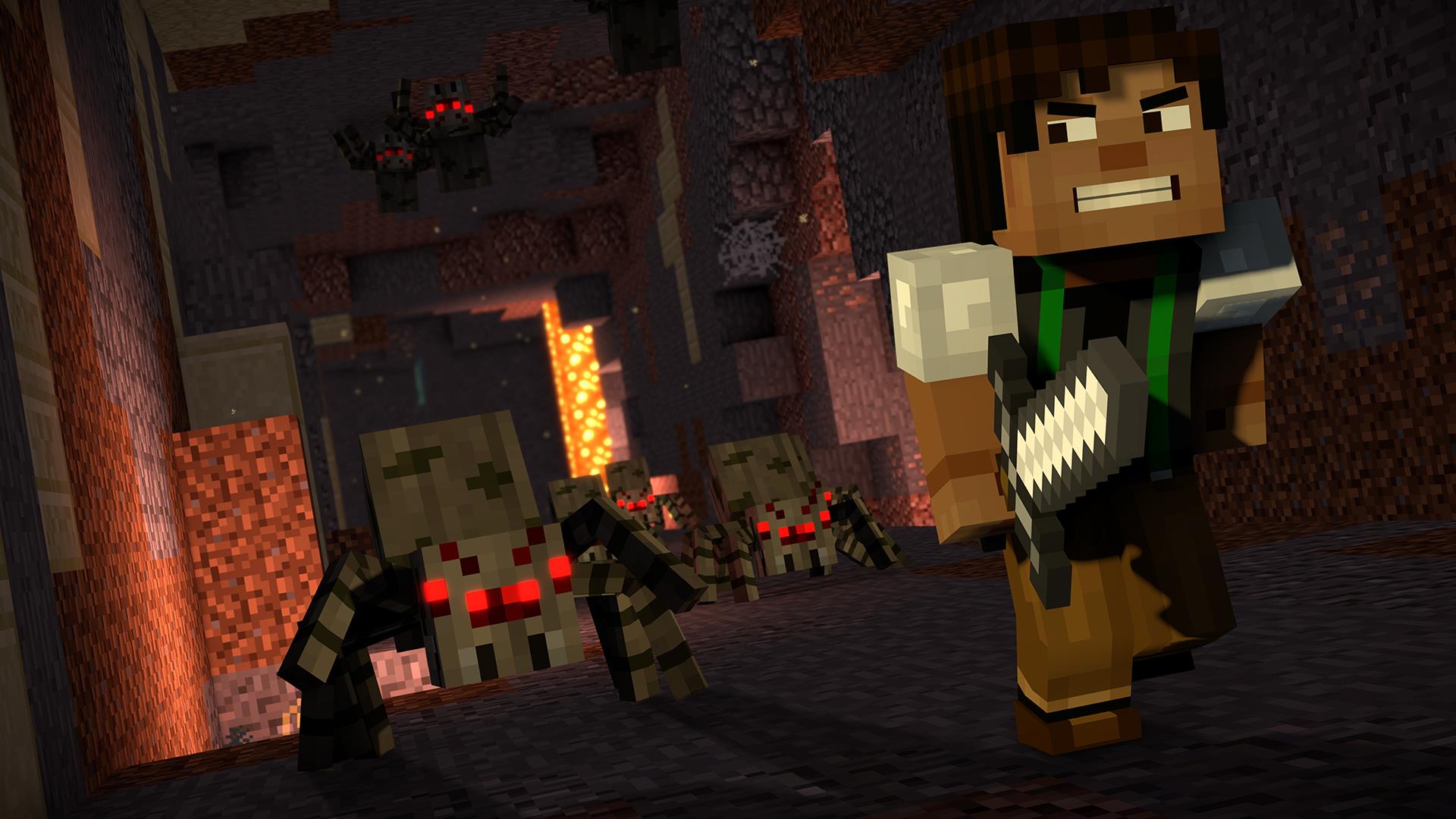 In fact, we learn quickly that thanks to their larger roles, the gang has mostly drifted apart in the time since the Witherstorm and portal jumping adventure with only Petra continuing to act like her old self. One of the first major actions that players are given in the episode comes down to time management as, being the leader of Beacontown, Jesse has the option of interacting with numerous residents, including past YouTube presences and other side-characters, as they prepare for an annual celebration or keeping a promise with Petra to meet up with her in the mines in prompt fashion.

Upon completing this little meeting and taking part in an impromptu quest, Jesse and Petra end up finding a strange new treasure that leads the pair of them directly into the path of danger once again as they try to figure out exactly what the artifact is and why, at least for Jesse, it keeps whispering his name while not coming off of his hand. This leads to an entirely new adventure starting for Jesse with both fresh and familiar faces joining for this part of the episode as a boastful adventurer who is a bit too full of himself to stack up in reality, and a villager of all things who is even treated handled differently than the rest of the cast thanks to his NPC style origins by having him speak in an unknown language and talk of ancient legends. 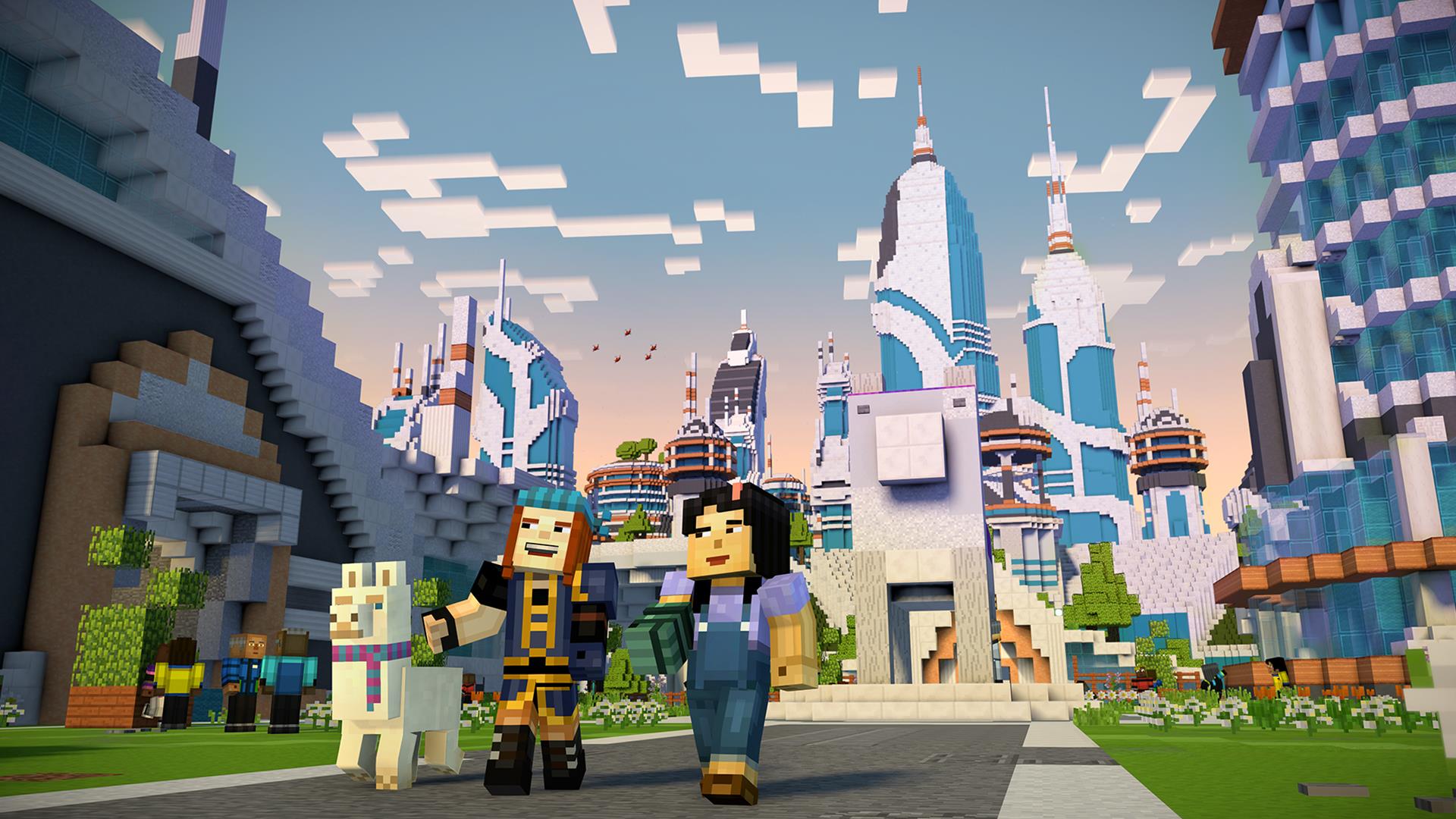 Telltale Games has managed to successfully kickstart this story by focusing just enough on past adventures and giving players a glimpse at the world that the group has built in their time between seasons. With new characters to learn about, a new (self-proclaimed) rival that can easily end up being a friend or a foe in the future, and enough intrigue into the current loyalties of past characters players will always be wondering what to expect. Especially when it comes to the story that unfolds throughout this first episode as not only does this artifact awaken a new sentient threat, it happens to be one that has the potential to be far more destructive than anything that Jesse has encountered before.

Of course all of this drama and story development doesn’t get in the way of the comedy that the series is known for. There are plenty of jokes to be made throughout the episode, especially in regards to Jesse’s rusty skills and potentially cocky attitude depending on your dialogue choices. It is worth noting that while this season does serve as a fairly fresh start for newcomers, returning fans will catch plenty of references to past events, including armor designs, familiar faces, and more to give loyal fans something a bit extra to look forward to.

In various ways Telltale Games has refined the gameplay elements in Minecraft: Story Mode, though the exploration elements, quick time events, and dialogue system remains mostly untouched. The biggest changes come in the form of fighting scenes where players are more mobile in combat, able to perform dodge rolls and manage a stamina bar while attacking enemies. There is even a building section where the game gives you the freedom to design a statue of your own choice with around thirty of each color of clay block. 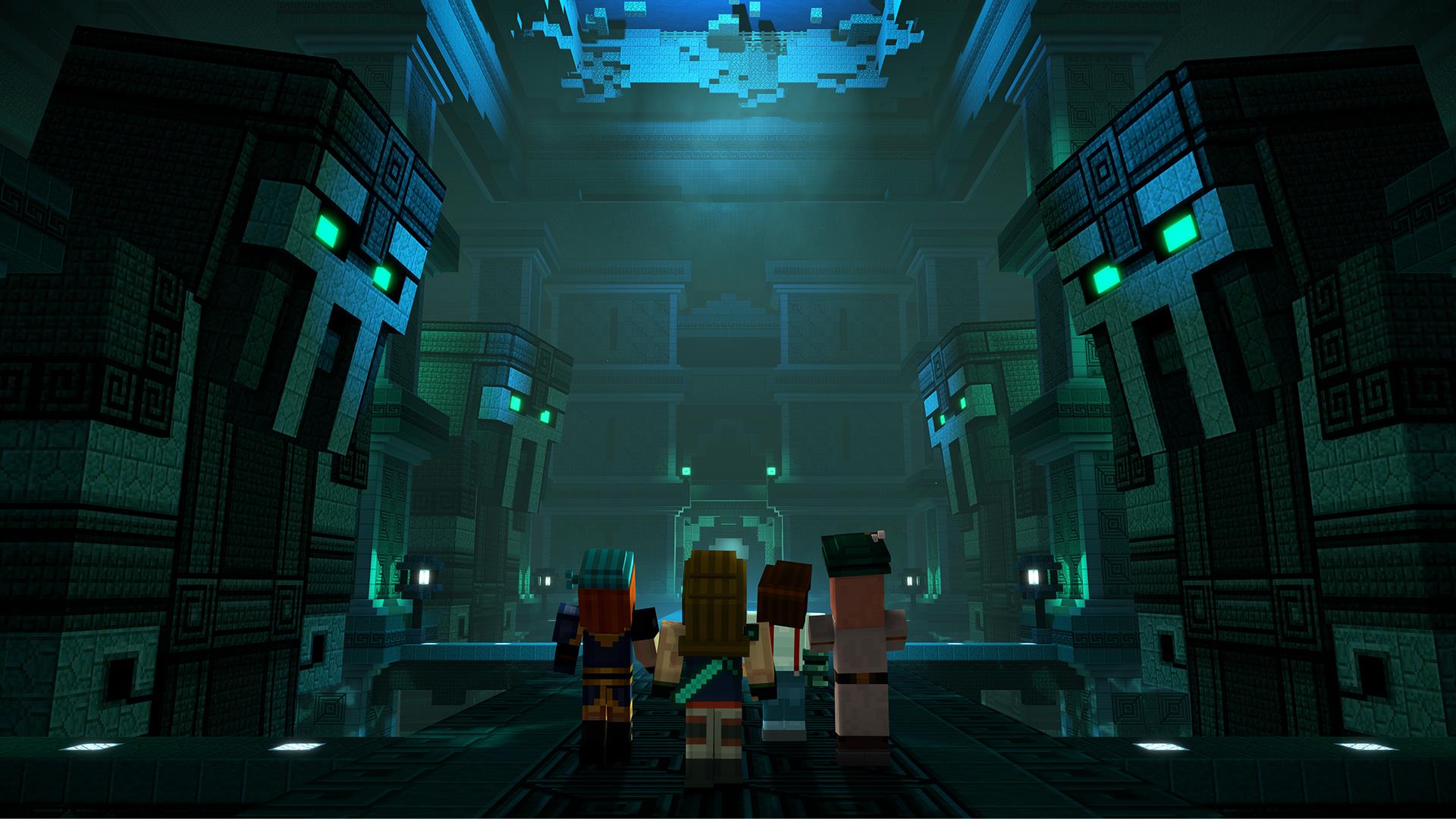 This is something that will be pleasing to longtime fans of Minecraft and doesn’t hold those interested in the story down much as you can design anything you feel like, even if it happens to be just a blob in the hopes of continuing the story. It is worth noting that there are some technical issues that appear here and there in this episode as some lines of dialogue are shown in subtitle but never actually spoken and there are a number of lip sync problems that crop up in certain scenes.

Thanks to this new season taking players to numerous brand new locations players will be in for quite a treat when you explore various areas. Each new city is splendidly designed while even the underwater areas and dungeons you travel through feature a unique look that always keeps things interesting, especially the new characters have unique outfits. 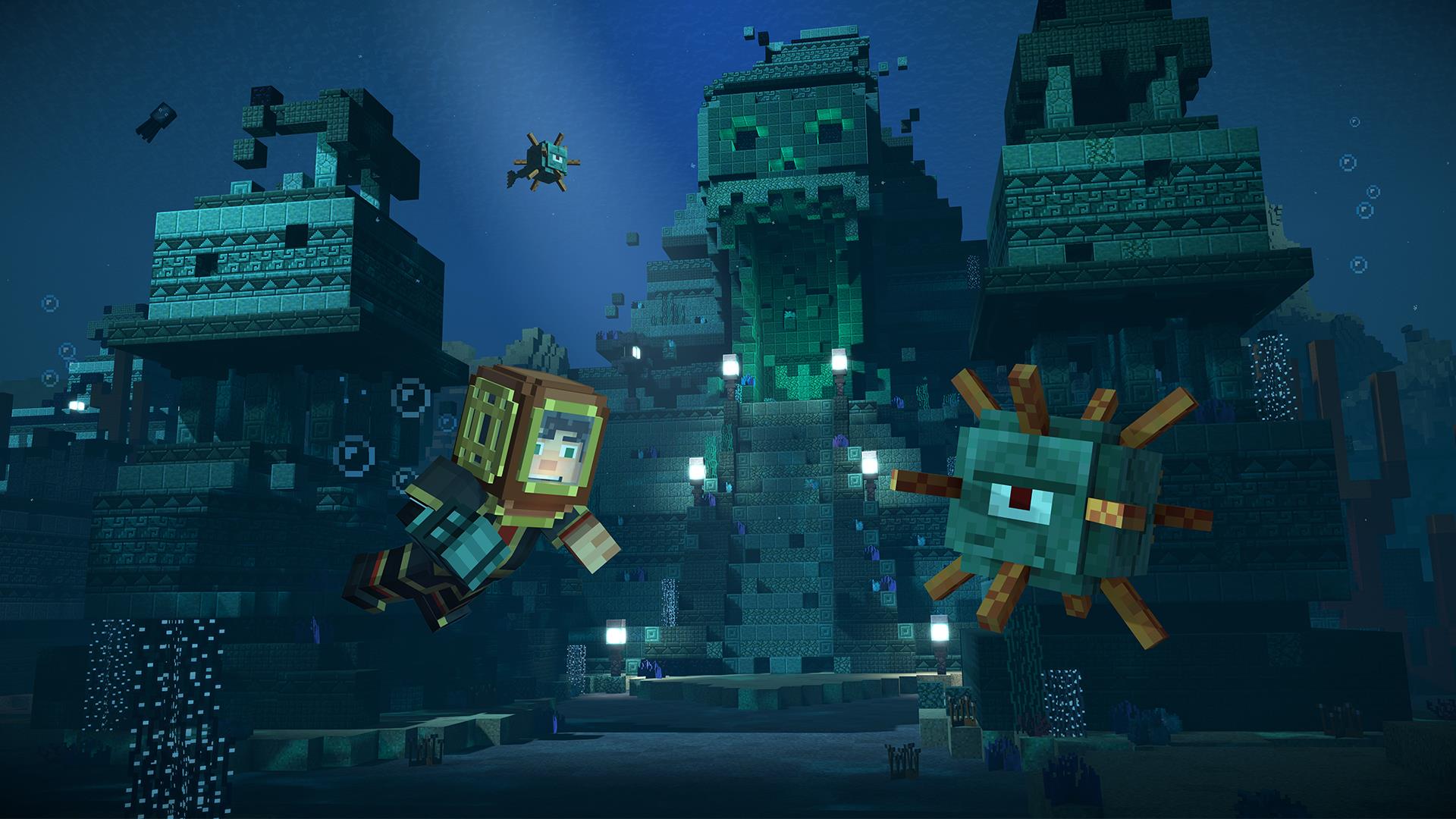 It is worth noting that although the majority of the voice cast has returned to take on their roles this time around, the voice actress for Olivia has been changed in this season, though considering her current appearance level it shouldn’t be too much of an issue. As for the rest of the cast, they fit their roles perfectly, especially in the case of the veteran adventurer who matches the role perfectly as he rambles about past travels in unknown lands.

Rather than focusing too heavily on past events Minecraft: Story Mode’s second season starts strong with Hero in Residence forging a new path with just enough familiarity to keep fans of the series satisfied while also being attractive to newcomers. With a familiar face, an interesting batch of new characters, and a colossal threat that is filled with mystery, the second season starts off strong with only a few small hiccups along the way.

Hero in Residence serves as a great start to Minecraft: Story Mode’s second season by starting with a mix of both familiar and new characters as well as a definite threat set in an established world.
8